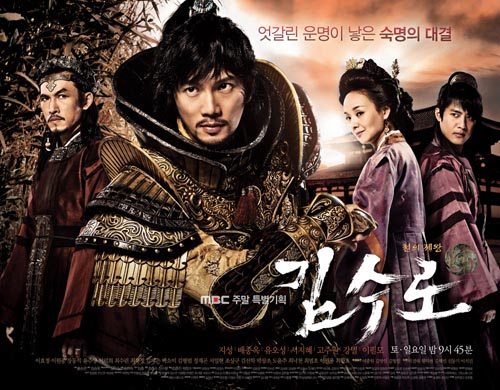 The main posters are out for the drama which premieres this weekend on MBC and tells the story of the founding of the Geumgwan Gaya (or Kaya) state, which lasted from A.D. 43 to 532. Kim Suro was its founder and first ruler, and despite being prophesied about by an oracle, he grows up not knowing of his birth mother (always a birth secret in these epic sageuks!) and therefore endures many trials and tribulations on the way to becoming king. The sageuk world wouldn’t have it any other way.

The poster above features, from left to right, bad guy Yoo Oh-sung (in case the dark glare didn’t tip you off), Ji Sung as King Suro, his mother Bae Jong-ok, and another rival Go Joo-won.

I remember reading a lot of comments that complained that Ji Sung (Swallow the Sun) looked too modern for a sageuk, but I think he’s looking the part nicely. (Although I can’ t help thinking how pretty and feminine he looks in some of the stills below.)

Look awesome!!!! Can't wait
By the way will you be recapping Bad Guy, I really want to know what you thought of the first episode

Seo Ji Hye better have a lot of airing time or else imma eat a cow.

Does anyone know if any of the sub groups are planning on subbing this? -crosses fingers-

I cannot wait to watch the first 2 eps this weekend. I'm glad Ji Sung is taking this role now, he's matured a lot. He's still got such a pretty face, but now it's a bit more weathered and manly rather than boyish.

I really like Kang Byul's look, I've never seen her in any drama, but for some reason I just like her. :-)

Does anyone know how many episodes this one is?

I fell in love with him in OB-GYN. Will definitely be checking this drama out. :D

Wow, I'm excited for this drama even though I'm not much of a sageuk drama person.

That would be because she's Indian. 8-) Well, the character is. More or less.

Oh, and dude, don't be yanking back on the reins like that! You want shorten your reins, put that horse on the bit, keep your elbows in, and steady your hands. Even if you were reining back you can do better. At least your heels are down.

Ji Sung (with the facial hair) looks like SIG

Hurray, it's releasing this wkend. Lucky peeps watching it in 3D. Please let us know how well it runs in 3D.

If you have the time, I highly recommend Harvest Villa if you haven't seen it already. Kang Byul is part of the cast and she is a hoot!

Thanks for the recommendation. Tons of peeps have been loving Harvest Villa. I will definitely make time for it, its on my to-watch list already. :-D

I absolutely agree with @12

SIG persona is stamped all over from the main poster right to the character poster. No disrespect to Ji Sung.

Thats why I'm a bit hesitant to watch this drama. I will be expecting SIG to walk into the frame or rides his horse across the frame.

i like ji sung without the beard.... but he surprisingly does look like a king with one...
i hope this is not going to be another all-out budget and no real substance sageuk.

These posters look good.. now I want to go check out the series when it airs!!

On the first picture there, Jisung looks like PD Kwak (Chuno's Director).

i am so optimistic with this drama. Might be this drama can be as hit as queen seondeo

I hope this gets subbed and recapped quickly....

Aww, I love Ji Sung but have my doubts about this sageuk. He does look great ihn the posters though, especially in the first one.

I like the main poster :).
This should be interesting since Kaya was a confederacy with each individual states ruled by their own king. Kim Suro vs the other 5. Looking forward to some epic fights.

looks like some major photoshopping has been done on the first pic no? almost likes very comicky ( hehe looks like i've invented a word there...unless im plagiarizing....in which case a thousand apologizes!)

I love historical dramas...
I think I watched them more than regular dramas..

But one thing I've noticed from recent historical dramas...
is that they go away from the actual history regarding important events..

I do understand that most of historical dramas are based on historical fiction novels that are out today..

These novels are based on "what ifs"...What if this had actually happened deal..

I am worried that many take these dramas as the actual history..
Especially for the Korean-American children who had not the opportunity to study it..

And so the tradition of historical twisted dramas continue with Gaya...
I wonder how they will include the relationship with India...I have a feeling that it will be one of the many parts that will be twisted...

I was appalled when I saw Queen Seon Duk & Iron Empress...
While most Koreans would know that this was almost a completely fictional novel with different ending to the history, I'm sure some actually thought that it was based on history..

I hope people will understand, while such dramas while entertaining, they offer many twisted versions of actual history...and it is....nothing but a drama and is only a fictional novel...

I totally agree with you, thus I certainly disappointed with some clashed of historical fact and events with the adaptation one. According to the historical compilation in Samguk perhaps, it is definitely different what I had expected. So much directors or story writers are failed to bring those history into adaptation drama and film. So I do read through any historical facts before I watched the drama and film or somehow in other hand.

First - For example in Queen Seon Duk, the campaign for unifying the 'Three Hans' was during King Muyeol (Kim Chun chu) not what I have read during reign of Seon Duk.

and etc...etc....etc it's so twisted (historical facts Vs fiction), so which one is the genuine to be preference for my sight?