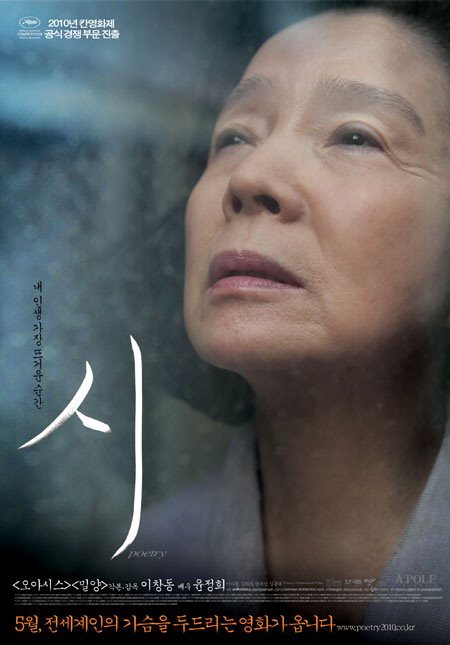 The winners have been named at the 63rd Cannes Film Festival, and Korea’s entry by Lee Chang-Dong, Poetry, picked up the Best Screenplay award. The festival’s top prize, the Palme d’Or, went to Thailand’s Uncle Boonmee Who Can Recall His Past Lives, while the second and third awards (Grand Prize and Jury Prize) were given to France’s Of Gods and Men and Chad’s A Screaming Man.

The Housemaid didn’t pick up any awards, although frankly I would have been surprised if it had. (Reading reviews after it screened, it seems most agreed it was wild and entertaining, but tended toward excess.) But with Ha Ha Ha picking up the prize for Un Certain Regard, Korean films have had a pretty good showing at this year’s festival.

Director and screenwriter Lee Chang-dong has had success at Cannes before, if indirectly; he wrote and directed the 2007 film Secret Sunshine, for which Jeon Do-yeon picked up her Best Actress award and the nickname “Cannes Queen.”

I'm so glad about the whole palmares this year. Kudos to Weerasethakul and Lee Chan Dong!

yay!! 2 awards at Cannes is not bad at all!! I'm really proud of them!

what a great year for asia. congrats to all!!!
this also means Kim Min-Jun has just worked with, what some have dubbed, the world's greatest director at the moment ;)

It was said "Poetry" received over 7 minutes of applause. That's why I love Cannes.

Congratulations to Joe! I knew Tim Burton would pick his film.
I am so pleased Asia won both the top prizes this year.

i just watched the trailers. so, um.. whats the story about? i couldnt understand, theres no subfor it..

I just got back from Cannes last night was gonna see this movie but didn't get the chance to book a ticket for the movie... But nice too see that it woon....They were also showing The Housemaid too over there .. But I think it was for marketing only.....

Hi JB. I'm curious about the reviews of Housemaid so far. Can you elaborate more on what you've read?? I watched the movie (despite the language barrier) and it left me feeling WTF. I was wondering if it was because I don't understand the movie entirely so I'm curious about what how it is received by Korean audience at large.

Has anyone seen Poetry? Just want to know what would you rated it (as in parental guidance)? Got caught off-guard at that sex scene in Mother >_<;