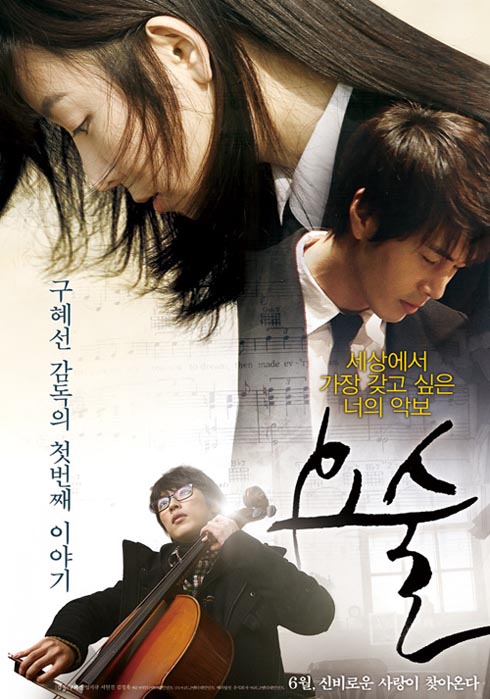 Here’s the poster for Magic, the directorial feature film debut of actress Gu Hye-sun. The movie is set for a June 24 release in general cinemas, but also screened at the 11th Jeonju International Film Festival (JIFF), which lasts through this week. Gu was on hand at the festival on May 1 for a discussion with festival attendees, and the poster was released on the 3rd.

Magic takes place at a high school for the arts and deals with the music, competition, and a “particular love triangle” between the students and budding musicians. The movie stars Seo Hyun-jin (the lead actress, who was also in Gu’s short film The Madonna, as well as roles in dramas HIT and Hwang Jini), Kim Jung-wook (Spotlight, Fantasy Couple), and Im Ji-kyu (pictured with cello, also of KBS’s Partner).

hmm, not sure if i'm excited for this or not. guess my answer is i will "wait and see."

hmmm...actor turned director. We shall wait if it will be panned or praised.

idk abt the movie ..bt the posters look great!

I wonder if she's really that talented or is she just riding the moment of her fame?

im sooo excited about this movie
GHS is one multi talented lady and i admire her for that..
it received a lot of positive reviews during its screening at JIFF.. cant wait to see it for myself =)

@ sveta: i don't think it's about that so much as about her just wanting to try everything and experiment, and using the opportunities her fame gives her. i don't think master of none applies to her, but neither is she awful at it all. she has varying levels of skill in the things she tries.. personally i'm all for seizing the moment.

as a person she's seriously likeable and adorable. as for her acting/directing/etc, usually hit and miss for me.

Please tell me how can you become a director in Korea??? I though one had many experienced in dramas or movies field or rich. Is she one of above? In US, most directors I saw were old and famous. Just wondering..

hmmm.... i'm not sure i'll be impressed but the cast looks good and the premise sounds like it has potential..
but then, the lower my expectations, perhaps the more pleasantly surprised i'll be.
goo hye sun may turn out to be a good director.
and thanks for the update!

@Sveta; She's a complete workaholic and loves trying new things. I think her fame gives her opportunities to do new things, although I believe even if she didn't have the fame she has now, I can still imagine her trying to do the same things that she is doing now in the future.

I can't judge her on her directing capabilities as I haven't seen her previous work. Even if I have, she's a rookie so I'm not expecting her to give out something so grande and perfect. But I really, really want to catch this film.

My only wish for Gu Hye Sun at this time in her life is that she doesn't wear a costume to an awards show...

I wanna see this!

I can tell from this article that you must HATE GHS, javabeans.

@LL, lol! Is my SECRET HATEFUL AGENDA OF HATE showing? i must be demeaning her because i posted about her, right?

her desire to tackle new things is admirable! but i have yet to watch anything she has directed.....

Anything with the hint of a musical score on the poster has me on board. Hopefully, it doesn't disappoint like Beethoven Virus has d:^]

suddenly i have this feeling, that GHS experienced an unforgettable love life before she debuted as an actress. and so she made her love story into book and movie. lol.. just a guess. anyway, i think she is talented. if not BIG, a medium one. she couldnt go this far if she's ony riding her fame.

well she's been doing a lot of srtsy stuff and all. Apparently, she has art shows, and now she's directing

Goo Hye Sun has also composed music before as well.

she is talented in both acting, singing, composing of piano composition
if she has the oppurtunity to try something new, and has the time, she will grab the oppurtunity to do it
dont be a hater
she sounds like a workaholic
and this BOF with lee min ho ( whom i dislike) and GHS was so overrated

Jack of all trade and master of none? This implies mediocrity, she should perfect (or atleast improve)her acting first

one look at those pictures and i know that the cinematography is gonna be stunning.
and seriously, don't hate on GHS, BOF was actually a ~bleh~ drama, you should watch GHS in "Hearts of 19"(if i'm not mistaken), that is a drama with real substance; just my honest opinion.

Compared to other high school drama, BOF was pretty good. Most characters in those kind of drama do not have as much depth as adult dramas. I thought BOF was well casted and the actors did a good job. The reviews for Magic had been good. I can't wait for it to come out.

I'm really excited for her~ I think its great she's got the chance to show the world her talents, how many people really get an opportunity like this? She would be stupid to waste away her time doing one thing. The now is in the moment and I'm excited to see this movie (I hope someone will sub it).

As for those saying shes riding on the coat tails of BOF fame, I really don't think she is. I mean she got hit pretty hard with criticism for her acting, she got the least amount of CFs than the other cast members and she has used any part of the drama to her advantage. Its almost as if she WANTS us to FORGET the awfulness of drama (the script was horrendous and didn't do much for the actors) and focus on the more talented side of GHS

Ugh, the poster's horrible haha. Blends & the stereotypical score sheet? Really? At least alter it significantly, rather than tack it on like an after thought to further emphasise the music aspect. The design student in me says "No!"

GHS, one of my first favorite Korean artist therefore I should give an applause to her.