My Country Calls will be airing once Birth of the Rich is over, and has released its official posters. The romantic-comedy series pairs a cute but accident-prone policewoman (Lee Soo-kyung) with a spy who’s a stickler for the rules (Kim Sang-kyung). Ryu Jin and Horan fill out the main cast; the former is both a slacker and ambitious — an interesting juxtaposition — and the latter is a spy who is called the “goddess” of the national intelligence agency.

To refresh your memory, the drama won an award in a 2009 KBS open scriptwriting competition, which is raising expectations for the writing in this series. It comes from director Kim Jung-kyu of The Man Who Can’t Get Married and writers Choi Yi-rang (Tamra the Island) and Lee Jin-mae (I Am Sam).

My Country Calls premieres on May 10. 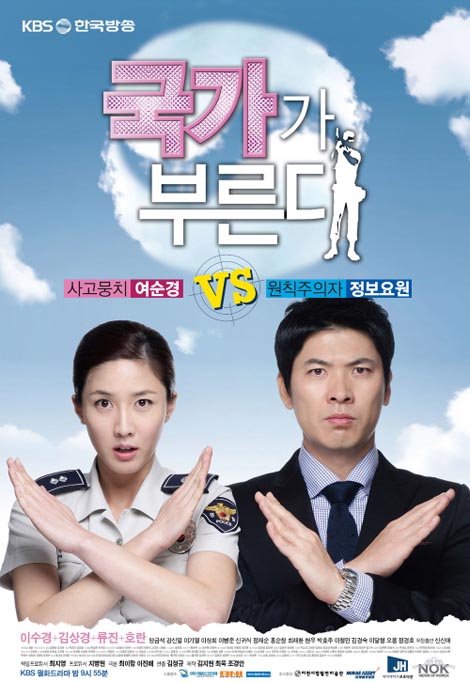 Looks fun but quite conventional...
Bit too much perhaps?

i will give it a try, looks ok

hum... i'm not excited about it but i'll give it a chance since it does sound promising.
and Thanks for the update. hope you feel better now

JB, or anyone else that can answer this question. how often does costars of a recent get to be costars again in their next drama?

For instance, Ryu Shi Won was offered the main lead role for Winter Sonata, but turned it down b/c he was recently coming from co-starring w/ Choi Ji Woo in "Beautiful Days."

@hmm, well I'd say it's pretty rare for the two direct leads to be matched up again in another drama, but it's not so strange if you're talking co-stars who weren't necessarily paired together. Lee Soo-kyung and Ryu Jin weren't the romantic pairing in Loving You a Thousand Times and it looks like they're not the main pairing here either, so I don't think this is too out of the ordinary.

^ in response to the above conversation, can i just say THIS MAKES ME SAD. :( unlike say taiwanese dramas, where if a pair has crazy chemistry that people go crazy over, they use them a LOT - mike/rainie and ariel/joe being the obvious examples. it's so disappointing they don't do this for kdramas. for example, if it were taiwan i'm sure they would have picked up kim bum and kim so eun and stuck them in a drama together after the huge love they got for BOF, and how everyone wanted more. even kim bum's fans supported the pairing as opposed to anti-ing the girl - capitalise!!

as for the drama, honestly sounds awfully conventional. bumbling but cute lead girls, please stop now. i love a lot of the bright spunky female leads but please, there are other personality types available.

@hmm...
lol, your question just reminded me of the Han Hyo-joo/Bae Soo-bin thing...they've been in two dramas together (well, they were in one last year and are in one right now) and they weren't together in either one. Poor Bae Soo-bin.

Anyway , nothing really pops out at me right now about My Country Calls (except for Ryu Jin--I love that guy--and Lee Soo-kyung), but nothing screams "DON'T WATCH!!" either, so I think I'll give it a chance. High expectations of the script =]

The second poster is so funny: My Country Calls X X (Like asking desperate help)

loking forward to it. but i'd like to see her with jung gyu woon. they look cute TOGETHER

Can I mention how scary it is that Horan lost so much weight? I watched her earlier this year doing a special stage with Winterplay (I just checked the date and it was aired on 03/11/2009) and she leaning towards a heavier build. Now she's a skinny-mini. Here's the clip http://www.youtube.com/watch?v=UpC1zbrymRk . It seems like a lot of weight was lost in a short amount of time which (in the corner of my mind where I know the members of Clazziquai and Winterplay like old school chums) seems like a very un-Horan thing to do. Or is it just me?