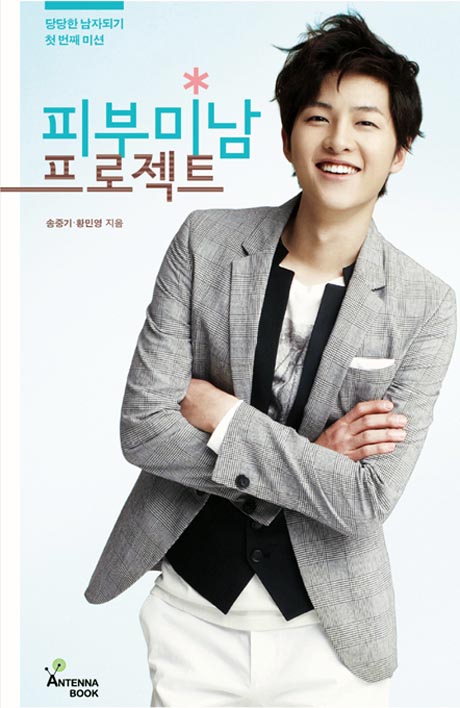 Budding star Song Joong-ki (OB-GYN, Triple) put out a book in April, which within a month has hit No. 1 on the bestseller list. It’s a “men’s beauty book” called Beautiful Skin Project — appropriate since Song is noted for possessing that trait. As he’s got quite the female following (unsurprisingly, since he’s adorable), approximately 30% of sales is attributed to women customers, despite the fact that it’s a health and beauty guide for men. (Ha. Well, I’d buy one if it had lots of pictures. Is that shallow? I think I’m okay with that.)

A number of celebrities have put out books, which can be separated in to a few distinct categories: essays, as in the case of Horan, Choi Kang-hee, and Kim Hyun-joo; novels and fiction, such as Shin-yi, Cha In-pyo, and Gu Hye-sun; photo collections, as with Lee Jun-ki, Kim Bum, and Park Ji-yoon; and how-to guides, which include this one and other similar titles like the beauty book by Eugene, the fashion bible by Lee Hye-young, and Kim Rae-won‘s cookbook.

On the acting front, Song Joong-ki has a few projects planned for the near future, such as the period drama Sungkyunkwan Scandal with Micky Yoochun and the film Heart Is 2, which is the sequel to the heartwarming 2006 movie that starred Yoo Seung-ho.

ahh, cutee! I want to see his upcoming projects...he surely has talent, and did I already mention, cute face? :D

He just doesn't look his aggggge!

Such a baby face.

Although I'm pretty skeptical of stars writing books... I think he probably knows a lot about how to keep his manly skin pretty, so I'll go with this. ;)

I want his book toooo! If it means there are plenty of pictures to look at! ;)

Why has this website gone back to people with shirts and pants on?! All jokes aside I would love to read Choi Kang-hees writings (she's very.. unique) and Kim Rae Wons cookbook (you can never have too many cookbooks). Also, Song Joon-ki is adorable.

Wooww..they gonna make sequel to Heart Is...I lurrrveee the first one. Yoo Seung-ho is so adorable. Although i was hoping for him to be in the sequel, but i take Song Joon-ki just as well...these two such adorable creatures!

Why not publish a book simply entitled "SOOOOOO Cute" and fill it with pictures of him being adorable (including many, many stills from Triple), interspersed with his musings on is own adorableness as well as testimonials from people who could not resist the magnetic pull of his adorability. This would have had the exact same effect on the bestseller list.

BTW... 15 of that 30% of sales that went to women was probably women buying the book for their significant other... or at least to surreptitiously try the tips on them.

There's no naked picture of him? After yesterday, this is a major disappointment.

@ 13 songhyewon
LOLLLLL!!! If there was, that would definitely increase the sales! XD

Haaaah! Oh well, such things are saturated here in the U.S. so it's nothing new if this concept spreads like a virus. And people still say the economy is in a recession.

When will a copy or two be available in public libraries? I want to make good use of where my tax dollars are distributed. ^____^ v

Oh! Good for him! :D Haha, I wonder what his book is like. When I first saw him in Will it Snow for Christmas, I couldn't help but find him so adorable~

Duwde, how gay is that XD to make a beauty book? srsly am i the only one thinking that XD?

You're so right...Korea is the most wired nation in the world, but still decades behind in gaydar technology.

That book is an eye candy filled with beautiful pictures of him.
I was lucky enough to be given an autographed copy.