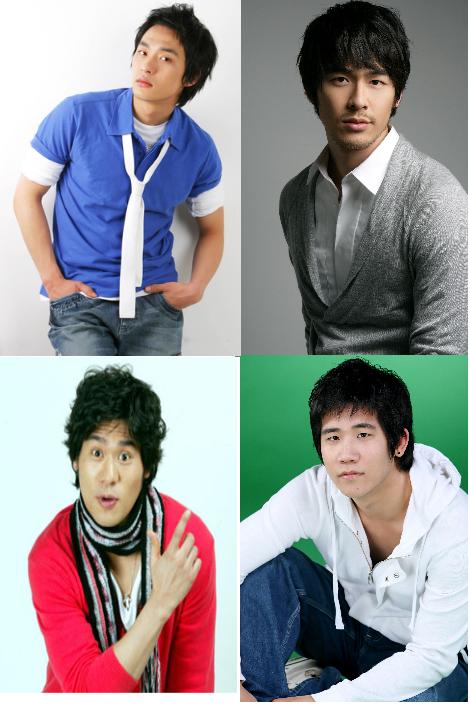 Now that the main leads have been selected, upcoming campus sageuk drama Sungkyunkwan Scandal is filling in its supporting cast. The four actors above play a group of sunbaes at the school who take an antagonistic role to our main quartet and are (from top left, going clockwise) Jeon Tae-soo, Chae Byung-chan, Kim Dong-yoon, and Kang Sung-pil.

Sungkyunkwan Scandal has already drawn notice for the casting of its main leads — Micky Yoochun, Song Joong-ki, Yoo Ah-in — who play three of the “Joseon F4.” (The fourth member is the role of a girl who dresses as a guy to take her sick brother’s place at school, and had been cast with Jung Da-young before she recently dropped out.)

In the rival foursome, Jeon Tae-soo (whom you may recall is the younger brother to actress Ha Ji-won) plays a “bad guy” role as the leader who is part of Sungkyunkwan’s student council. He was in 2007’s King and I, which makes this his second time in a sageuk. Kang Sung-pil had roles in Legend and Queen Seon-dok and plays Jeon’s right-hand man in a comic role highlighted by his dimwittedness. Chae Byung-chan was apparently in My Fair Lady (I can’t recall him, but he may have been one of the butlers), while new actor Kim Dong-yoon takes on a new character who wasn’t in the original novel.

I think I might watch this but for the wrong reasons, no 2 looked hot.....

woot??...jun da young dropped out??....aah nw fr all the speculating as to who will be cast!

ha ji won's brother!! he's gorgeous. to steal a line from sung min-woo, good genes sure do run in the family! ngl i'm insanely excited for this. it'd be nice if the cross-dressing girl could actually look somewhat like a goddamn guy for once, although since it's sageuk she'll probably be wearing the giant black hat, that should help the disguise somewhat.

huh sounds interesting
i'll def look out for it

the one in the red shirt, he was in Queen Seon Deok as Samtak(sp??). He's a great actor. He always made me cry whenever he cries in the drama. I'm looking foward to see his role in this drama :]

It's Santak. And you're right, Kang Sung Pil is one of those super-supporting actors. I have avoided leaving a comment on any Sungkyungkwan Scandal threads because I just can't get excited over the DBSK idol taking the lead. I hope Song Joong Ki steals the show.

Wonder who will be the main female lead. Why she dropped anyway? This type of drama (girl surrounded by boys) always make the female lead become famous (BOF, HanaKimi).

I would be all over this... and as much as I love DBSK (yes, I am one of their rabid fangirls, but for their music, not for their acting), I too can not get excited over Micky Yoochun taking over the lead role. BUT SONG JOONGKI. Ohmygod... LOL. Swoon attack, please. LOL.

I think it's a lot easier for girls to pull off the cross-dressing in the historical setting. Or maybe this is coming from someone who's seen too many wuxia material and the girl cross-dressing thing is commonplace. LOL.

jung da young dropped out? is there any confirmation from her? wow, it's so interesting, just wait for the real female lead. i hope i still interested with the female lead.

I'm looking forward to Yoochun's acting. Can't wait to see how it is...

Wow, a combination of BOF and You're Beautiful... quite interesting can't wait to watch it!!!...