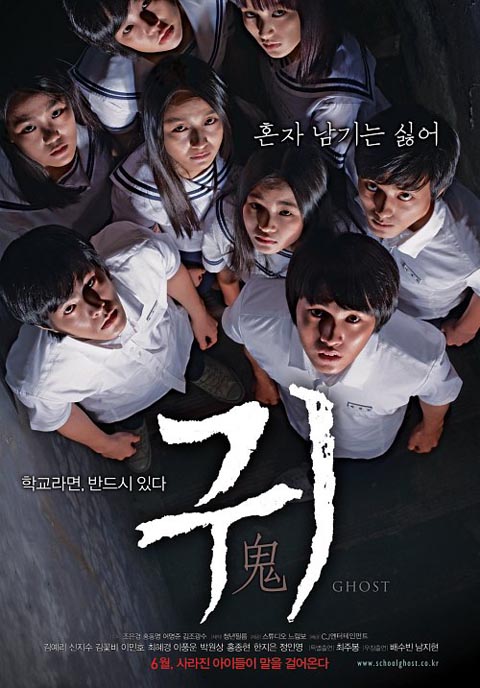 Summertime is horror movie season, so I’m expecting those films to start cropping up in the coming months, and Ghost is one that features a favorite subcategory in the genre: the high school horror flick. (Another school-based movie planned for a summer release is Death Bell 2, which is a sequel to 2008’s Death Bell, aka Bloody Midterms, and stars Hwang Jung-eum, Yoon Shi-yoon, and Ji-yeon.)

In the movie, when the ghost of a dead student starts speaking to current students at her school, this sets off a series of hair-raising events. The ghost of the teenage girl haunts the boy she loved and starts calling friends to their deaths. (What a friend, huh?)

Ghost features a cast of relative unknowns, ages spanning 15 through 25: actress Kim Kkot-bi is on the rise after her role in the low-budget sleeper hit Breathless and Shin Ji-soo was in SBS’s Jejoongwon. Kim Ye-ri was in Paju, and I also recognize one face from the recent drama Oh My Lady, Hong Jong-hyun, who played The Show Company’s Jin-ho. Horror series can serve as a launching pad for rookie actors into greater fame, such as the actresses in the Whispering Corridors series (Park Jin-hee and Park Han-byul are two examples), so these fresh faces may be hoping for a similar result.

To be honest, I’m not that intrigued by the trailer below (which seems pretty garden-variety as far as horror stuff goes), but Ghost has received some early positive reviews, so I’ll keep that in mind. The film premiered at last year’s Pusan International Film Festival, where it received attention as an entertaining entry into the horror genre. One of PIFF’s programmers called it “fresh and special,” while festival-goers called it “witty and funny.”

Via No Cut News

the last pictures is so scary
im such a scaredy cat and i cant watch the trailer LOL
someone wanna tell me how it is?

Wow. it's pretty gruesome. The start of the trailer kinda freaked me out. Really unexpected, but the rest was SO-SO. Found it more gory than scary though.

I'm going to watch it even though I hate horror movies. The scariest thing I ever watched was "The Stepfather" which starred that gossip girl guy

I don't know how to describe it, but the film looks way too slick for me, and I find that a lot with horror movies these days. I guess I got spoiled by REC :-p

Lastly, the only thing that was missing in the trailer was Unchained Melody ;)

Looks good.
At the end,where the girl's face turned into whatchmacallit,whoa...that was epic! really good! :) I wanna see the movie. ^^

i liked the poster. it's kinda cheesy but still looks good.

poster is Not at a flattering angle.