I know, there’s been a lot of promotional material coming out about MBC’s Kim Suro, but as the drama finally premieres this weekend, this’ll probably be the last of them. I just thought I’d share, since the photos are lovely and portray a wholly different look to Wang Bit-na than we saw in her most recent role as Bu-ki in The Woman Who Still Wants To Marry.

In Kim Suro, Wang plays Ah-ro, aunt of Ah-hyo (Kang Byul), and possesses outstanding martial arts skills. She uses her wiles and espionage skills to approach the man who currently holds control over the Kaya nation (played by Lee Won-jong), from whom she conspires with her niece to steal the technology of ironworking.

Her appearance as Ah-ro is a stark contrast to the awesomely stylin’ single-and-proud Bu-ki of The Woman Who Still Wants To Marry, although to be fair, her look as Bu-ki was actually a departure from her usual image, so perhaps this is closer to her regular look. Not the elaborate hanbok, of course, but without the sharply asymmetrical haircut.

In any case, Kim Suro premieres tomorrow, May 29. 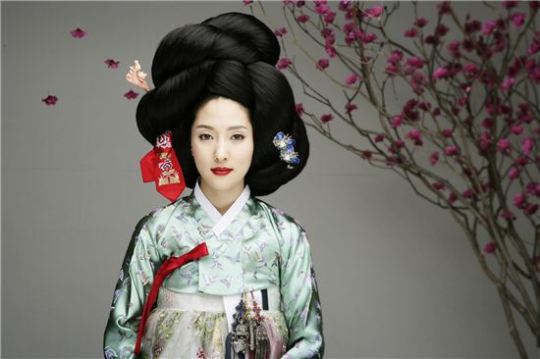 The pictures are gorgeous!!!

The reasons to watch Kim Suro just keep coming! Lee Pil-mo and now Wang Bit-na. She will always be Boogie-Woogie in my heart though! :-D

She looks stun.ning in those pictures. So excited to watch this!

I always am fond of Wang Bit Na because even though she's plastic, she has the classic-look. I remember when I watched Hwang Jin Yi, when she came out, a lot of people were commenting on how she out shined the lead actress. And that she stole the scene because she looked stunning on every scene.

I feel like the hanbok in the pictures are an anachronism... The hanboks here look to be Joseon-era hanbok, while Kim Suro takes place during the Three Kingdoms Period. Feels kinda awkward - like if Marie Antoinette were suddenly thrust into ancient Rome, if you will.

the 2e pic, the hair, wowwww. the 1st pic, the hanbok textile, gorgeous.

stunning although her nose....
havent seen her act yet tho.

I sort of lost interest in Kim Suro a while ago, but goodness I'll watch this just to see this woman!

She looks absolutely breathtaking in that hanbok! It helps that she actually looks like she knows how to wear it gracefully than just having it plopped on her.

It also revives my love for hanboks. They can be so lovely, and yet the most common (and easily affordable) hanboks that most see are the "plain", simple ones. The simpler ones are pretty no doubt, but I think many foreigners that haven't seen a variety of hanboks (I'm not saying all, but a good majority) believe hanboks to be very plain and shapeless.

While Wang Bit-na's hanbok sure isn't the most affordable, and might be pretty darn expensive so I'm not saying that everyone should wear fancy hanboks like hers, I wish the hanboks that she wears are more advertised than the basic ones. Especially in those commercials for tourists and photos. It shows off how beautiful hanboks can be.

@sungirl: That's why many actresses in sageuks have head and neck pain. The head pieces are very heavy. Even for woman that don't have to wear them still have to sit for a long time having their hair waxed straight - which is quite painful as you can imagine.

@maine: You're so right! But didn't each district of Korea have their own clothing? So even if people of the same era didn't wear the same type of clothing style? Especially northern Korea? I'm not sure... but even if it was possible that these outfits can be from the same era, when you're watching the drama you don't always think about that so it does seem a bit funny.

omo!! i loved her in Hwang Jini!!! I think she would fit the role!
thanks for the news!

She was fantastic in The woman who wants to marry! Her character and her looks blow me away! Definitely will watch the drama!

wow she looks lovely..i'll probably check out an episode or two.. ^__^

Omo! Hwang Jin-Yi flashback! 'Twas an awesome in the first half, before all the lovey-dovey stuff.

That was the first thought that went through my head. Second thought:

the first picture looks like her costume from Hwang Jini. And like #7 said, it looks odd to see a hanbok in the three kingdoms era.

I'm pretty sure these are Wang's promo stills from 'Hwang Jin Yi.' She's said to be a last minute replacement for Son Tae Young on 'Kim Suro' which probably took place after the promo shoot for the rest of the cast.

she looks amazing in those pics
side note: that hair must be heavy

the hanbok is beautiful, but how unfortunate fitting sometimes. hardly ever see the boobs, and from the second picture, it looks as if hers are ..hanging down there.

am lovin WBN ever since i watched her act in TWWSWTM.... ^_^

and I have always wondered how heavy that kind of hairpiece is..... looks pretty heavy...^_^

I like her in HJY...I agree she has classical beautiful look and so she's perfect for sageuk role, I won't tell it plastic, I'd call it porcelain ☺

That hair must weight tons.

She looks like the time when she was in Hwang Jin Ji.

Ah anyways enough of my crappy imagination, i'm gonna have to wait for your verdict on the pilot episode before i decide if I want to follow this drama.

She looks just as beautiful in a hanbok as she did in Hwang Jini.

Such a great actress. Fully capable of being a main character as well as a compelling supporting one.

Wow...Woman who still wants to marry WAS a departure from her image because I didn't even realize she was Bu-Young from Hwang Jin Yi until I saw these photos and recognized her. I'm way late.

This are some gorgeous pictures! I'm not sure if I'll watch Kim Suro, but the new additions with the cast has me intrigued

Less elaborate than in Hwang Jin Yi but she still has that ancient beauty look. Ethereal..

I remember the lotus wonsam (부영원삼) when she was so stuggling in her efforts to perfect (more like finish) her master (Mae-hyang)'s drum dance, which she performed in front of Jungjong (played by the actor who played Jang-geum's dad & the Emperor in "Princess Hours")...

which is weird, since authentic 15-16-cen. chima (the hanbok skirt) is tied at the waist, and the jeogori (the hanbok upper clothes) is so long enough it covers the breast...

as the Hwang Jin-i BTS program has said, the hanbok style used were 19-early 20-cen, since it's more alluring, and if you wanna see what 15-16-cen. hanbok looks like, I suggest you watch YeoinCheonha (which is in the same time period as Hwang Jin-i)

WOw! what a beautiful woman. The traditional style is so lovely.

I found her to be the most gorgeous woman amongst all three women in Still Marry Me.
And she's absolutely stunning in those pics :)

no insult to anyone, but I just wanted to say, Kaya is a coconut base bread jam in Singapore and Malaysia!

She DOES look stunning, love the first look more though. And as a spy who uses martial arts? Awesome!

I'm always amazed with traditional Korean hairstyle like shown in second pict...Do they really have it at the old time without some help from hairspray? Sometime they seem like hat that directly grow from rich haired head...just beautiful and mysteriously amazing...

First thing I thought If when I saw that photo. Was the horrible facial hair they put on the yummiest of all Kim Jae Won in Hwang Jin Yi.

Boogie was such a different character from the mega-evil thing she played, I really didn't recognize her. from one show to the next. She is a good actress. I will have to go look up whatever else she was in.

She was cute paring with Kim Ki Bum in "Chun Ja's happy event". search for the kiss scene on youtube, I guess you'll like it!

I loved Wang Bit-na in Woman Who Still Wants to Marry, and she is a beautiful woman, no doubt.

What really captivates me, in that first photo, are her eyes...simply mesmerizing.

i have to say that her addition to the cast makes me a little bit more interested in kim suro than i initially was...

a spy eh, i can see it more as an assassinator because of her cool image from woman still want to marry