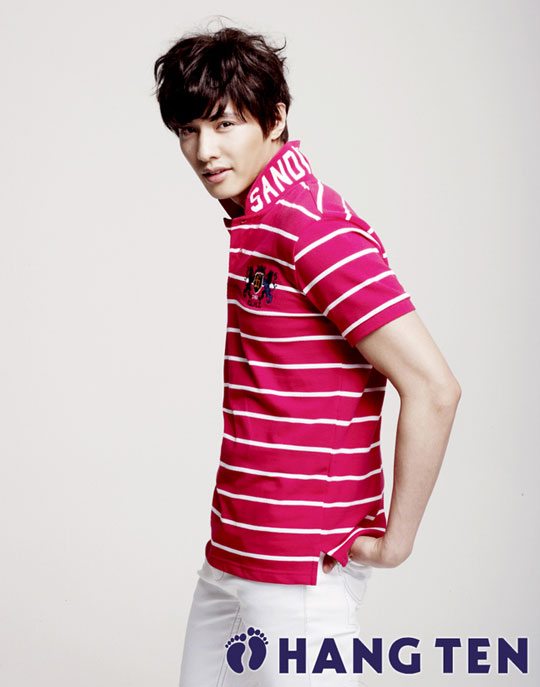 Well, it’s not a new acting project, but I’ll take my Won Bin (Mother) where I can get him. He is currently modeling fashions for casual clothing brand Hang Ten Korea, as seen in these recently released photos for the company’s summer line. This is his second campaign with them, as well as for his modeling partner Hong In-young, a relatively new actress who was in last year’s Iron Empress. (The two shot their first campaign together in the spring.)

Won Bin tends to take his time between projects, as he’s acknowledged in interviews, and his last role (in Mother) had been his first in five years. He does have a new movie lined up, Ajusshi (perhaps more accurately transcribed as A.jus.shi per the Korean title, 아.저.씨), which co-stars Kim Hyo-seo.

SO FINE!! This guy, first saw him in Friends sooo many years ago, continues to be one of the hottest ones in the industry.

Omo it's been forever since I've seen Won Bin. I still remember him in Autumn Tale. Probably the first (in a loooong line of ) 2nd lead guys I rooted for! :)

Won Bin is still so hot and so boyishly gorgeous!!

waaahhh, when is his next kdrama? Missing him so =(

Can do no wrong. He's super duper cute!

he doesnt look much of a korean guy. i mean the USUAL korean look.

i think we have the same height and way younger in terms of age, but why is it that i look older than him. is it because of kimchi?

I want to EAT him alive! RAWR!

he doesn't age right?
his look like ten years ago!!where he play Tae Suk in Endless Love
gosh how can that be?

They look so cool!

Their both beautiful! great pics!

omg he is super cute

gosh do i miss him... and is it me or he is even hotter than before?
Anyways, thanks for this post full of eye candy!

they both look so good together...hope to see them act in the same drama...emm..nice pairing then...

I like the flip flops in the last pic. They're kinda cool.

WON BIN IS <3 why is that he doesn't seem to age? i don't know the girl but she's cute :) JB, please update us more of won bin!

Am I the only one who's thinking he's not ageing? *Comparing between 'Friends' and the pics....

he looks very eurasian to me! is he though? either way he is swoon worthy! Mccutie!!

Oh my!!! With this clean cut he looks MEGA HOT! Not that he is not enough. So So handsome!

Did JB just claim WONBIN too? hahaha! He IS MINE! lol
anyway, i do miss this cutie so much. Saw his recent CF with Shin Mina and it breaks my heart when they kiss! lol Love these new sets of pictures of him, the previous ones were kinna like meh! And I can't wait for his movie to out, "Ajussi" and he's gonna look bad-ass with guns! Thanks JB!

Why are they making him wear Mom's jeans? I get the feeling that he hates the clothes and he should. They are awful. He's too sensitive and soulful to be wearing clothes like that. Only toddlers should wear clothes like that.

I think WB should go for longer hair to bring out his beautiful doe eyes and great facial structure and his sensitive personality. The one he's spotting in these pictures is too generic and trendy boring.

One of my first k-entertainment loves <3 I think I'm still bitter towards Song Hye-Kyo and Song Seung-Hun for stomping all over Won Bin's heart in 가을동화 (albeit he let them) even though it has nothing to do with the actual actors themselves, LOL.

And is it just me, or does he look younger?

LOL I agree. I only watched it for him. One of the best spoiled rich yet lovable character ever. I didn't really care about the other two. XD

Oppa gets hotter the older he gets ^_^. He reminds me of Kim Wonjun (VEIL) now because they both are old but look so young.

I miss seeing him on small screen.

Is he mixed? he doesn't look like a Korean or pure Asian.

That's him right??? The one from Autumn in my Heart or Autumn Tale???? OMG. i havent seen a drama or movie with him (not that i know of) for a very very loooong time.. He looksd gooood!!!

Won Bin kind of reminds me of Kimura Takuya in some angles. XD Wonder if anyone else saw that similarity??

he always has that boyish charm :)

wow. he looks so good and younger!!!! i thought he was a newcomer cuz he looks so different.

This look suits him! That last pic is cute!

#38!!!!!!!
hahah yes actually a lot of people in japan and korea compare his looks to Kimura Takuya...Because they do look alike in some of their pictures..but once you see them acting and on tv shows you see that they are unique in their own way :)

and to all the other people...he is full korean and actually lived in this small village in korea...His eyes are super gorgeous right? I think that with his big eyes, tan, and chiseled (did i spell that right) face is what makes him look not so full korean.

i can't believe after all these years...
won bin still put a smile on my face.
such a pretty guy!!!!!!!!!!!!!
sigh~ i wonder if he's thinking of doing anymore dramas!
*autumn love story*
kyaaaaaaaa!

wow they have hang ten in korea??...too bad i have yet to see a store in america

Gosh, Won Bin would look so good beside beautiful Kristine Hermosa...still an echotin fan though hehe.

Most beautiful man on this planet.

@ 43
thanks a ton seems like im not the only one wondering if he is of mixed origin! lol he is yummy....he has tht sharp european look abt him.....looove the clothes as well....maybe not the jeans i like my jeans the way god meant for them to be worn looool...but the tees are all fantastic!