Drama version of Civil Servant in the works 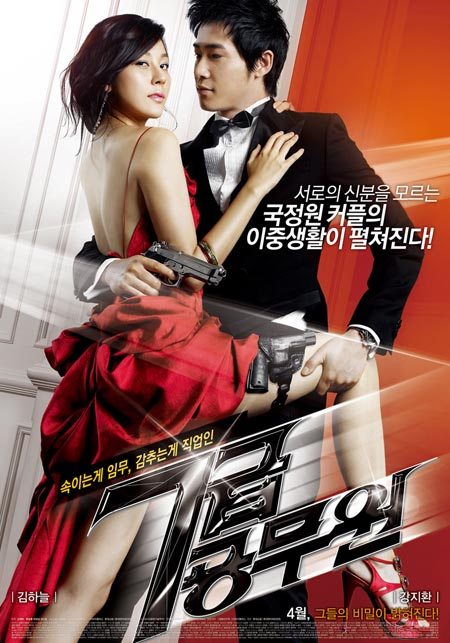 The hit action-comedy movie Level 7 Civil Servant (aka 7th Grade Civil Servant aka My Girlfriend Is An Agent) is getting remade into a drama series, and is currently in the planning stages with Apple Tree Pictures, which produced comedy series The Man Who Can’t Marry and thriller drama Time Between Dog and Wolf.

This news had actually been floated about a year ago, but it looks like producers are jumping on it now to capitalize on the success of Chuno, whose writer, Chun Sung-il, also penned Civil Servant. Chun will also write the scripts for the television adaptation, which means he’ll be mighty busy in the coming months, as he has already signed on to write Rain’s comeback drama Runaway (which, by the way, also happens to be described as a spy drama, although chances are it’ll be more serious than Civil Servant). Runaway is being planned for later this year, while the Civil Servant drama will follow next year.

With the success of IRIS, we’re about to get a rush — dare I call it a glut? — of spy-oriented drama series. There’s IRIS 2, the spinoff series Athena, and Runaway. And now Level 7 Civil Servant. However, the one thing that sets this apart is its strong comic angle; the movie was lots of zippy fun.

The movie’s plot centered around a woman (Kim Haneul) who hides her spy identity from her slightly bumbling but well-meaning boyfriend (Kang Ji-hwan). When her stories don’t add up and he gets tired of being shoved aside for odd reasons, he finally leaves her and goes abroad for his job. A few years later, he comes back as a rookie agent and runs into her again, much cooler now but not without a trace of his former dorkiness. (LOVE him!) But of course, neither can let on that they’re both spies, and moreover, their respective teams are working on cases that bring them repeatedly in contact with each other. The plot didn’t always convince — bioweapons, Russian baddies, blah blah — but the humor and the two leads made for an entertaining ride.

There have been a few instances of movies being turned into dramas, which include the recent Friend, Our Legend and 2008’s Gourmet. The success of the drama will hinge on who they cast for the two leads, because Kang Ji-hwan and Kim Haneul had tons of chemistry, so I’ll be very keen to know who they end up picking.

OOOOOOO I am happy!!!
I love the drama, it was fun and exciting.
I wonder who they will cast

I want them to have Kang Ji-Hwan!

i love Kang Ji Hwan and Kim Ha Neul on that movie!!! Is there a possibility of them being casted in the drama version??

Yay!! I'm looking forward to this since it'll be a reunion between Kim Haneul and Kang JiHwan who previously starred in that drama 90 Days, Time To Love.
:)

I honestly don't know if the drama will work without Kim Ha Neul and Kang Ji Hwan, because they made the movie for me. I'll keep my eyes peeled for more news on this though 'cuz I did enjoy the movie.

please please cast Kang Ji Hwan for this!!!!
Yes it's a fun movie, it'll be awesome if we can get the two main leads on the movie star in the drama version too.

I really enjoyed the movie and it reminds me a lot of "Mr & Mrs Smith" which I liked a lot too. I saw where "Civil Servant" was for sell in Blu-Ray the Taiwan version but I want the Korean version.

I've wanted to watch this movie for SO long. It's ridiculous. I absolutely adore Kang Jihwan and I have the biggest girl crush on Kim Haneul. It's perfect. LOL.

Anyways thanks for letting me know! I think I'll look forward to this drama.

Mmm... I wonder if spy dramas are having any chance of success right now. I mean, if you look at how the hilarious "My country calls" drama is faring...
I'm actually surprised at Horan's acting skills. She's pretty much into her role. :)

The two actors were good looking and still are, however the movie trailer was more interesting then the whole film put together. Maybe the film had bad timing then to compete with something like Speedy Scandal if I recall appropriately.

I want to find out Mr and Mrs Smith engaged, wed, and handle spy work during and after a pregnancy with a twist of Korean flare.

kang ji hwan and kim haneul were pretty much the only things good about this movie. not much else was.

it wouldn't be the same without Kim Ha Neul and Kang Ji Hwan. their chemistry was great. and i really like KHN.

so weird im currently watching this movie!! and my interest is sorta flagging gotta say! only one thing's holding my attention though...*hides from JB*

I wasn't impressed about this movie. Only good thing was KHN and KJH chemistry, nothing else.

oh yeah bring it on!!...o god plz let Kan Ji Hwan and Kim H Neul agree to work on this again!!...even though that most likely may not be the case.....then plz god let there be a gr8 casting director for this drama!!

watched the movie....love the chemistry between Kan Ji Hwan and Kim Han Neul, she looked gorgeous in this movie.......who can top them?

Let Kim Ha Neul and Kang Ji Hwan be the leads again in the drama please! They are seldom seen in a comedy series together, mostly sappy melodramas.

I actually didn't like the film. I thought it was poorly written and poorly executed; therefore, I'm not too excited about the Kdrama unless they bring excitement and more charms into the characters and also the storyline.

I also hope the cast would be worthwhile!

Saw this movie yesterday. LOL. It was great fun and KJH and KH did have great chemistry. How about Gong Yoo and Kim Sun Ah for the series?

Omg same! I watched this movie at 2am in the morning. Was bursting with laughter to myself. Awesome movie. LOVE the Pair!

I watched this movie and didn't see what the hype was all about.
The plot wasn't that great (due to the time constraint of the movie?) and KJW overacted as the nerdy accountant but he was great with Ha-neul

It didn't seem to get any progress on the production since early last year. I love spy dramas, so will definitely check this out.

Saw this too, it was entertaining; not the best, but it was fun to watch.

If KJH doesn't get the role for the drama series, I hope Gong Yoo steps in. :-)

I agree with most of you, the movie wasn't that great. However, the chemistry between Kim Ha Neul and Kang Ji Hwan is not to be discussed! I laughed a lot (KJH is the best!), but I have to admit that this movie didn't bring anything new to the genre...
So, I'm not really looking forward to the drama, unless they recast KJH and KHN together (which is more than unlikely).

WOOHOO! i LIKE this spy drama (if it happens)

i'm all for spy comedies (go Chuck!) so if this one happens it'll be perfect!

funny how it seems that in the US there are a bunch of new spy tv shows coming up too....

the movie was so much fun!!!

the two leads definitely made the movie so, i'll look forward to hearing more about the drama, especially in regards to casting. here's hoping that they can get Kang Ji Hwan and Kim Han Neul to reprise their roles!!

I must admit the movie was a disappointment to me - it's a case of not living up to the hype. Everything in it looks and sounds familiar. Not that it has to be groundbreaking but making fresh presentation or new twist could do the trick, as in My Country Calls. It is really KJH and KHN make the movie worth a watch. Hope the drama can do better but right casting is the key.

would be great if both leads get casted again.. but maybe doing the same plot again would bore them..

Wooohoooooo!!!!! i'm so inlove with kang ji hwan these days... they look really good together!!

about this upcoming drama... i'm not sure if i'll be looking forward to this... actually, the movie kind of reminded me of Mr. and Mrs. Smith...and i thought the hollywood movie was a lot better but kang ji hwan gave me a great deal of laughter!!! he was hilarious! and i really enjoyed the movie because of him and kim ha neul... :)

I think it would be amazing if they just reprise their roles. Has that ever happened where a drama or film was adapted and the leads followed?

I'm sure it had happened before but none that I can think of....

I bought the DVD out of my love for KJH and I have to say I was disappointed. The story is incredibly weak. So I am not holding my breath on this one.

I enjoyed the movie...I thought the ending was going cut off with the arresting comments but that end scene...just fabulous

agree with erie #21. movie not that great, kang ji hwan overacting grated on my nerves. sorry to say, didn't finish the movie because of him. the only good thing about the movie - kim ha neul is beautiful as always..........

Looks just like the drama for Kim Sun Ah and Gong Yoo. We'll have a riot!

I like that idea, KSA and GY!
I don`t know what`s in store for KSA fans up to now.
I feel bad that it`s been a year already that KSA is not working on any.

hey, i just watched this last night and i did love it! i kinda like it short and simple... hope the drama turns out alright. i have to agree with everyone else that the leads in the movie made it fun and exciting...but i would like to see someone else portray these roles as well. I <3 KJH!