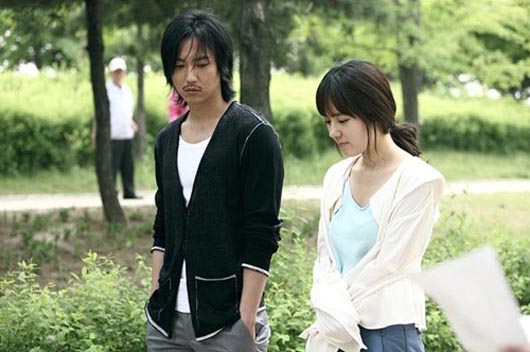 Episode 3 of SBS’s new revenge thriller Bad Guy was scheduled to air on Wednesday, and there was no advance notice of its pre-emption, but the broadcast ended up being postponed due to coverage of the local elections.

That means Episode 3 will be shown on Thursday instead. One source (Consumer News, Korean language) has reported that SBS will broadcast both 3 and 4 on Thursday, but it’s the only outlet doing so; most other reports don’t make mention of it, so unfortunately I wouldn’t hold my breath. A look at the drama’s official site shows that a notice has been posted for a Thursday broadcast of the third episode, but there’s no official mention of the fourth. Most fans are clamoring for both to be aired this week. (As consolation, if there’s no double-broadcast tomorrow, there’s a good chance the drama will order an extra episode, so there’s that.)

Guess the future of the country takes precedence over my desire to gaze upon Kim Nam-gil. But I don't like it. :-(

Oh man! And I was just about to d/load it, was all giddy and excited and everything. *makes angry fist at SBS*

Double episode tomorrow plz.. Finger cross .A week of waiting was so so long.

I was so bummed! Please give us double episodes tomorrow!!! *crosses fingers too*

Man, I was so bummed out since I was looking forward to this week's ep!

Owss...I was so excited for this and hoping double episode tomorrow. I am just falling inlove with Kim Nam gil fast and hard...lol. I was doing a marathon on Queen Sendeok and my gosh...how can I missed watching Bidam? The guy is fantastic...and am glad I got the chance to watch his current one...

Thanks for this info Javabeans...

ty! i was wondering what the heck happened!!! lol.

I hope we get doubles tomorrow! Although that would make my day much busier with two episodes of Bad Guy AND the finale of Cinderella's Sister!

What the heck?!! i was so excited to watch it, but since the country's future is more significant than my selfishness...i would pave way for it, anyway i could catch BAD GUY anytime...kekeke

From the station (SBS) point of view (a.k.a profit), i don`t know about Bad Guy rating, but CS is pretty strong and on its last episode, so it`s gonna get more stronger. So, i think they`re just gonna aired 1 eps. tonight.

From MY point of view....PLEASE GIVE ME DOUBLE!!!

What are the current ratings of the Mon-Tue dramas?

oh man! that's bad news for me since i'm such a Kim Nam Gil fan but anyway... it's over and done.... country calls so what shall we do???

Despite all the hype, SBS does not seem to like this drama very much to the extent of not even bothering to air it whenever they have the chance not to. Without any notice, they remove the drama from its usual slot only to replace it with another. Although elections are important, there should at least be ample notice to inform viewers about the change in scheduling. It is not as if the elections are only planned last minute. If not for changes in casting in I Am Legend, I doubt BG would ever see the light of the day. Now next week, there will not be any BG screened as well due to Fifa World Cup. I wonder if BG is really that melodramatic or upsetting that the higher-ups have lots of issues with? That is not the way to treat a drama under its label. I am really disappointed at the way SBS does things sometimes.

@14
WHAT? NO Bad Guy next week either? I don't even live in Korea but that's very disappointing. I will have to wait THAT much longer to download the ep and see it subbed. SIGH.

I'll post this later as well, but there WILL be Bad Guy episodes next week. However, the World Cup is the week after, and there will not be episodes that week.

should it really be on the time allotted for bad guy!? just what the heck does that station think they're doing!!it's enough for this week but for them to repeat it again is just truly annoying!

Thanks for the info javabeans! I was going to look for info on the drama's schedule but had no idea where to go.

this is such a good drama yet its thrown aside so easily.....ARGH!

kim nam gil is so SEXAY