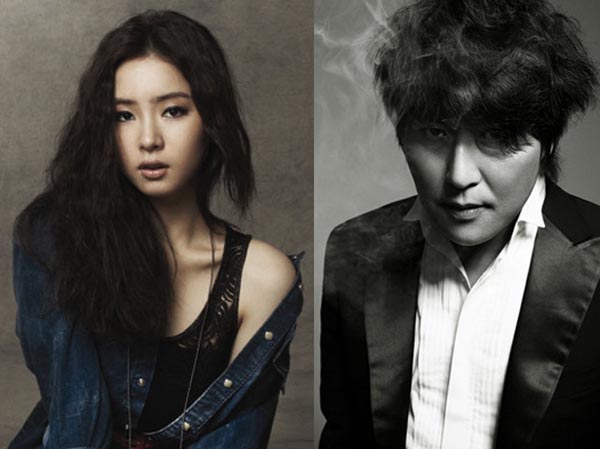 In it, Song Kang-ho plays a retired mafia boss, while Shin Se-kyung is a mysterious woman who is sent to kill him. When she tries to get close to him, he shows a different side to his normally cold mob boss exterior as he develops feelings for her. Meanwhile, she comes into conflict with her original motives when she starts to care for him as well, and role will allow Shin to depart from her innocent image in showing a bolder, more provocative side.

Directing is Lee Hyun-seung, who brought together two (literally) faraway souls in Il Mare with a light and deft touch. Blue Salt will begin filming this summer.

Good opportunity for her. The story sound promising, But only thing I quite hesistant about this movie is the 23 year age gap between Song Kang Ho and her. I dont know yet.

Will she able to pull a sexy role in her age?
I mean like Son Ye Jin in Open City? Or else she would look as Song Kang Ho's daughter.
I've got nothing against her, liked her acting in QSD. But she seems overrated..

I find her acting skills promising and I look forward to the movie;;
thanks for the news javabeans

A rather cliche storyline, but it gets me every time!

Shin Se Kyung's acting still needs much improvement, but I definitely see potential for her to grow and acting opposite Song Kang Ho can only help her. I can also see how she fits her character, although the age difference between SSK and SKH does bother me. But perhaps that's the point... I wouldn't be surprised if there is a twist that SSK's character is out to get revenge on her own father, although such a story line seems more in character with Dir. Park Chan Wook's work than Dir. Lee Hyeon Seung's.

wait. why isnt she doing the gumiho movie anymore? who's replacing her?

the storyline seems really similar to Lust Caution, but am looking forward to it anyway!

Love Song Kang-Ho. It does sound a bit like Lust Caution. That's OK with me!

Sounds interesting but I'm a little bothered about the age gap...I love both of them as actors so I can't wait but still....

Meh. Not excited about the storyline as it seems so cliched. I mean, the part about trying to kill your enemy but seeing the "other side" and falling in love. But than again, watching films is like reading a book. You know what the beginning is, the plot, and you can also just skip to the end to find out how the novel finishes. It's just how we get there that's entertaining.

Even if the plot doesn't seem that exciting (for now), it has Song Kang Ho! It'll probably be a lot more entertaining when watching it.

I thought Song Kang Ho is a tad overrated :X his acting is getting predictable for me.
I do like SSK, there's sth very eyeball catching about her, it's not the looks, it's not bone fide acting abilities, it's charisma, the je ne sais quoi.

@biscuit:
what's the difference btn mafias and gangsters?! a more 'coordinated' establishment vs a way of life?! ;)

I wanna see how Shin Se Kyung handles this part, it'll be a great acting experience for her because she's paired up with Song Kang Ho. At just 19, she already showed a bolder and provocative role in "Ogamdo." So I wouldn't be surprised how well she takes on the role.

other than reality of the industry (25~30 female, and you're shown La Porte?), i don't think Song Kang-ho's had any remarkable chemistry with leading ladies closer to his age (if they can be called that~ more often they take a backseat to his "one-man show of extraordinary talent": even the great moon so-ri was reduced to a flower vase:P)

so it's just as well, they're using his widely accepted, lovable persona to OK the middle-aged crisis cured by mysterious, hot young starlet. why not, when you go to movies for fun 'n' fantasy, not social reality....oh wait:D don't count on this being an unattainable girl flying in and out of a treatise that's really about aging and dying (Death in Venice, etc)...no, it's field day for ajussi chest-thumping :D

I read a few comparisons of this film to Léon / The Professional, and while I didn't mention that in the post (it seemed like a stretch to me, and Shin is way older than that Mathilda character), one might consider that the relationship may not be strictly romantic between the two actors...

Song Kang-ho as a mafia boss!? I'm sold! Love the photo of him here as well.

What are the odds on both of them dying by the film's climax? I'm sure Shin's boss won't be too pleased she didn't fulfill her mission and kill Kang-ho ;)

Some of this young actress should be careful when choosing their role, as too much skin exposure may mar their future movie projects, and I already remember 2 who have not been in drama or movies since.