Song Joong-ki as a bad boy in High Cut 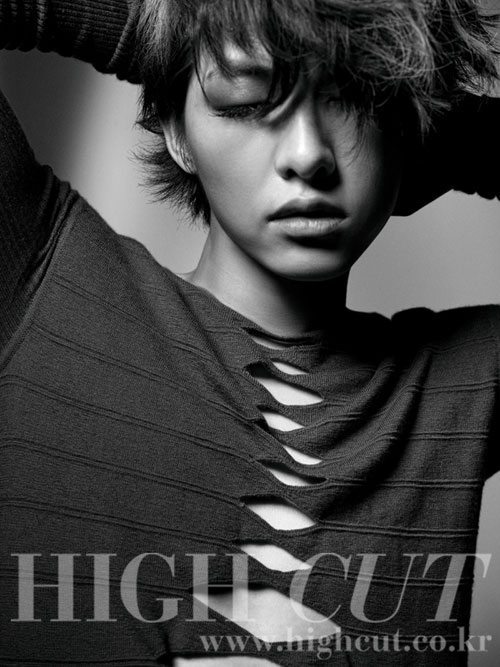 Song Joong-ki is so pretty, even dressed and styled as a “bad boy” for his High Cut magazine photo spread. (They do tend to have interesting photo shoots, don’t they?) And while the smoky eye isn’t my favorite look on men, I love Song Joong-ki and he still looks hot. It’s a new look for him, since he’s more known for his boyish charm and youthful appearance (he’s 24, but could pass for much younger).

Song has been working steadily for the past year, taking on small but notable roles in dramas like Triple and Will It Snow For Christmas before earning a main role in the medical series OB-GYN. With a new movie coming out (Heart Is 2) and a highly anticipated youth-oriented drama in the works (Sungkyunkwan Scandal), I’m thinking he’s just on the verge of breaking out into mainstream stardom.

even with "bad boy" concept , he's so pretty & loveable! xD

He is sooo goodlooking ^^
*drools*

Awsome!! He pulls the bad boy image in those photos

Guyliner, manscara, and lash extensions... woah, I think he can play Sho in the adaptation to Skip Beat along with Ariel Lin. What do you all think?

He has a very nice face. My best friend watched "Will it Snow for Christmas" and fell in love with him. LOL. Along with Go Soo of course.

Despite the main role going to Park Yoochun, I'm looking forward to the drama because of the rest of the boys.

I love the hair!

i couldnt recognize him at all...tooka double take when i read his name...lol.....awww..i love my pretty "bad" boys

gahh so many celebrities get lost in the heavy makeup! It would be muchmuch better if the makeup actually accentuated each celebrities unique features instead of trying to blend them all together into pictures of nothingness and unimportance.

guy stll manages to look unusually pretty for a bad boy.
must admit i prefer is boyish image more (his smile charm!)

oof - that second photo looks so eerie! sharp angles everywhere and it made it seem like he had a nose job! but like so many others - yep, definitely unrecognizable...

if you hadn't labeled this song joong ki, i never would have guessed.

he pulls it off amazingly well i think. he looks....super hot. but i think i prefer him as cute and wholesome looking.

why is it that artists in korea when portraying the bad guy image, they always put on eye makeup? i just find this really funny

Song Joong Ki for Itazzura Na Kiss KR version!!
( or he's too cute for the role? )

@kaedejun: yea i thought it looks as if he had a nose job too :0

loving his pronounced jawline in the last shot

Jeesh I cant wait for the day when guyliner dies!

haha thought it was a girl in the 1st pic!

the same cut out top as the one binnie worn last issue?

"Despite the main role going to Park Yoochun, I’m looking forward to the drama because of the rest of the boys."

LOL i concur!!! i'd probably watch it because SJK XD

No matter how I look at it, he looks like a girl. A VERY pretty girl that is.

He has the cute-face curse, and I feel his pain. From ages 15-25 if anyone called me 'cute' especially guys it would feel so insulting. Now at 27 I think it's a blessing when I still get called that. Hah!

But Song Joong-ki is a dude and for dudes it's different. I hope he'll be taken seriously as an actor one day. For his sake.
I loved his role in OB-GYN and still remember many of his lines... but I also remember when I'd discuss him with any friends who were also watching the show, it always went down like this:
Me: God, that Dr Ahn! Such an a-hole! I can't believe he...
Friend: He's soooo cute!! (cue: squee frenzy)
Me: But did you see what he did last episode? When he….
Friend: Sigh, he's such a cutie, he's the kind I'd take home and introduce to my mother!
(And there was more than one who said exactly the above!)

Aah well, here's at least one who takes his acting seriously as well as taking his gorgeous looks into consideration.
Love the last snap the best.

I found out that javabeans has a lot of interests in SJK, he's updated frequently.

Oh, yes... that certainly screams "bad boy." I bet gangsters give him a wide berth when he comes marching down the street.

@tokyojesusfist -- you are too funny!

OMG. That is so wrong. LOL. What do they want us to do? Being torn apart between who's pull that better? It's Hyun Bin! and Song JoongKi!

@yen_nguyen:
i don't mind. SJK is a cutie and quite an actor. :D loved him ever ever since My Precious You (which JB, you forgot to mention that that was his bigger break into the drama scene. :P)

Guys with eyeliners is a total turnoff for me. Do men in Korea really walk around the streets with makeup, or are these idols doing it for show? And that second jacket looks like my kitchen curtains.

Bonjour, Charming to yoke you, I am Julia