The many faces of Road No. 1’s So Ji-sub 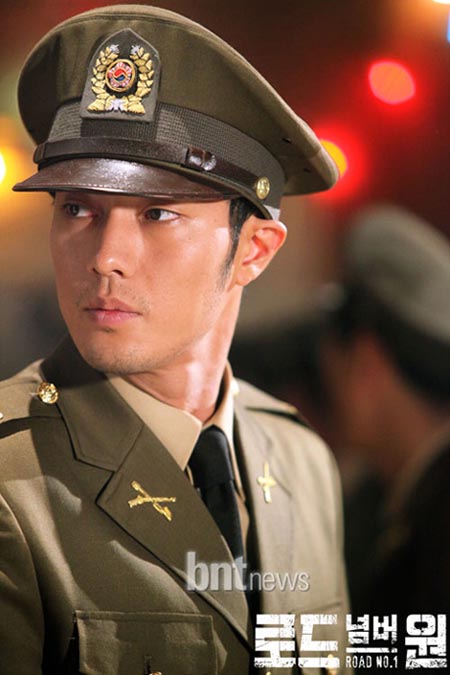 With just a few more weeks till MBC unveils its Korean War drama Road No. 1, here’s a look at star So Ji-sub in several of his guises as the main character, Jung-woo. The melodrama boasts a hefty production budget of 13 billion won, large-scale battle scenes, and heart-wrenching romance between the leads, So Ji-sub and Kim Haneul. (Rounding out the love triangle is Yoon Kye-sang, who falls for the girl and fights alongside the guy, playing the classic part of the third wheel.)

Filmed and produced almost entirely in advance, the drama has currently shot 90% of its footage. Road No. 1 premieres on June 23, just shy of the 60-year anniversary of the outbreak of the war on June 25.

hahaha, i LOVE the last 2 comments. you guys are awesome! love all around!!:)

I love this site!! I'm not into war either but I like his acting so I would check it out.

OMG! Just watched the long trailer and I'm crying already. I hope I make it through this drama. I love both SJS and YKS so I"m anticipating major emotions from them. Never been a big fan of KHN but I think this might suit her really well. Lets get this one rollin already!!!

when will this air?

I'm really looking forward to this drama. I don't mind war dramas, a change from romantic comedy, hero action, and family oriented. I'm not necessary a big fan of So Ji Sub but I'd rather watch him than 'Into the Gun Fire'.

It's a figure of speech, you ding-ding! You have to read through the discussion prior to the comment to understand that the person is only basically agreeing to the positive comments of others and is expressing his/her own opinion of SJS. She didn't need to be specific about her "love" of SJS because it was a given that it is either his performance or physical appearance that draw people to him. He is a public figure afterall, known to many. Unless that person is SJS girlfriend, which would be close to impossible, the person is not implying an emotional relationship with SJS. Why would we know it's the case? Stare at your computer. This is a blog! Of people interested in the likes of SJS!

I was thinking you must be an angry person to comment so loosely and irresponsibly. Or do you only read literally?

So Ji Sub is HOT!!!!! I LOVEEEEEEEEEEEEE his acting, his eyes, his hands, his lips, his smile, his tears... just everything!

Honestly war drama is too heavy for me, but for Jisub I'll definitely wacht it.
Beside this the rest of the cast is also strong, the cameos are like wowwwww.
Although the storyline is classic, but war drama IS classic, so no problem.

Faces-of So-Ji-sub for me is Enigmatic! That's why he is a good actor. His presence instilled whatever role he plays.

the drama.."Road NO1" is the great drama....
I really ..really love SOJISUB'S" He's very good acting in the drama.....
he's a true made my heart throb...and he was really acting all emotions in his eyes ..so wonderful.....
SO JI SUB and KIM HA NEUL in drama... They are both great acting !!!

Acting of both him & his costars is bad in this drama.

I'm with everyone else. I LOVE SO JI SUB. Totally in love. Gone, see ya, bye. We've been in a relationship now for about oh, 6 years. Since he said I'm Sorry, I Love You...What happned in Bali? So put that in your cynical hater pipe and smoke it.