A duo of fateful first encounters in MBC’s Night Light 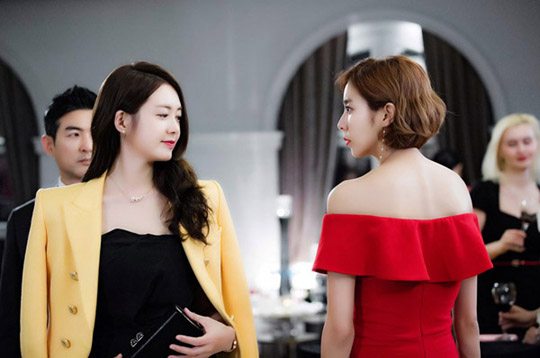 Sometimes you just want to see characters being steely and hard, particularly heroines in a landscape that is so populated by nice Candys, which makes up a large part of my interest in MBC’s Night Light, featuring characters who are determined to amass wealth and power, each for their own differing reasons.

I’m also intrigued by the relationship between the three main characters, with Jin Gu (Descended From the Sun) first falling for Lee Yo-won (Ms. Temper and Nam Jung-ki), a rich ice queen, and then falling for UEE (Marriage Contract), who essentially turns from a humble Candy into a second Lee Yo-won when she takes the once-in-a-lifetime opportunity to change her life’s direction. Usually, drama love triangles highlight rivals with opposing natures, but here the ladies look like they’ll be two of a kind, despite starting out in different places.

The first set of stills depicts the first meeting between characters Yi-kyung (Lee Yo-won) and Se-jin (UEE) at a VIP charity auction. Yi-kyung discovers Se-jin playing the role of a fake girlfriend to a rich loser who’s trying to get revenge on an ex-girlfriend, and is intrigued by Se-jin’s toughness, holding her own in a sea of privileged folks. She judges Se-jin’s true nature, potential, and hidden ambitions at a glance and approaches her, kicking off their complicated relationship. 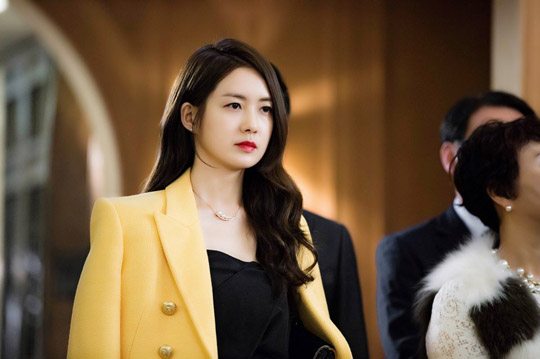 The next set of stills shows us the first meeting between the other pair, Yi-kyung and Gun-woo (Jin Gu), back when they lived in Japan. Yi-kyung is a Korean-Japanese gyopo (Korean living abroad) whose father has built up a top financial company in Japan, who harbors ambitions to create her own “kingdom” and believes that greed is no sin. Gun-woo is a chaebol’s son himself, but lives in Japan while pursuing his dreams of being a musician.

Yi-kyung has been trained by her father to never let a cent go unaccounted for, and to chase down owed money no matter what, so she doesn’t stand by when she happens upon Gun-woo being scammed out of money by a con artist disguised as a monk (Oh Jung-se). And thus their youthful romance begins, with free-spirited Gun-woo being the only man who can make Yi-kyung laugh, and the first-love relationship is described as fiery and passionate.

But that’s all in the past, and whatever it is that pulls them apart isn’t quite resolved by the time the present-day storyline picks up twelve years later. The two exes run into each other again in a chance encounter, entangling our trio of characters in a complicated love triangle. As if there’s any other kind.

Night Light follows Woman With a Suitcase and premieres on November 21. 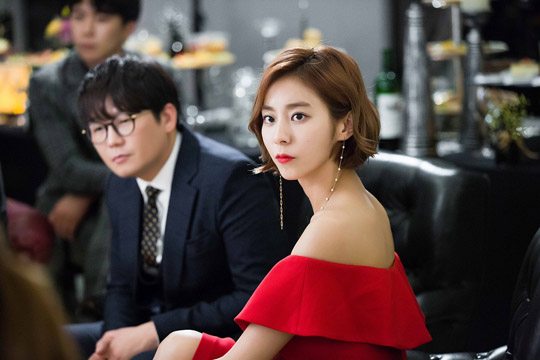 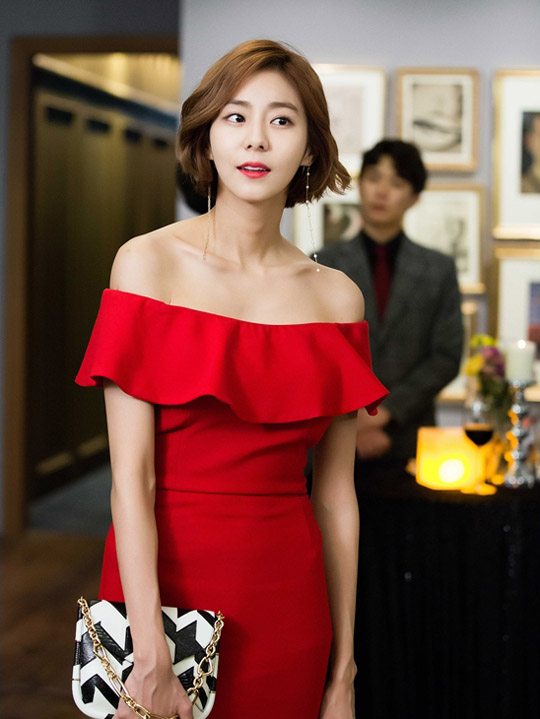 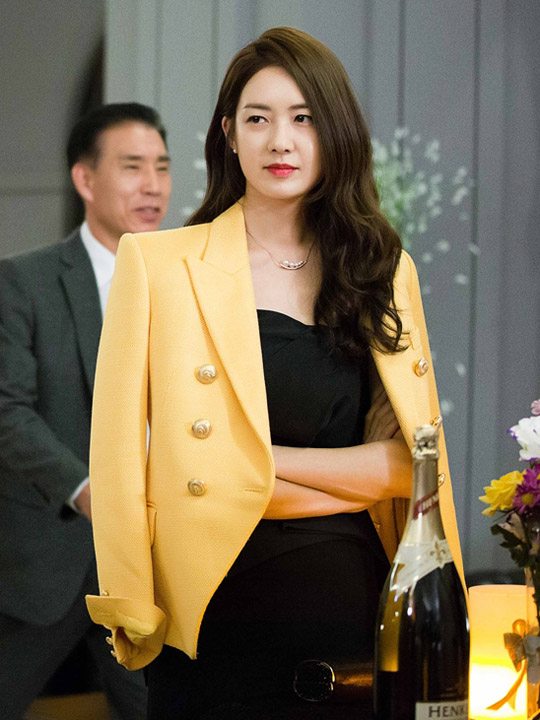 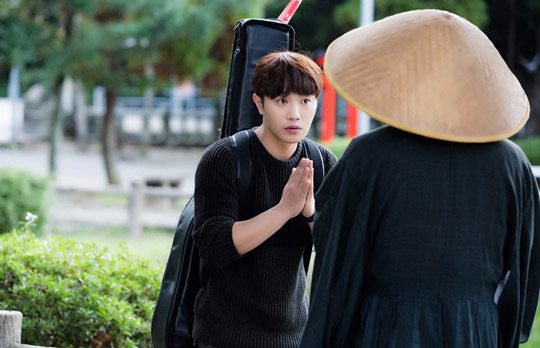 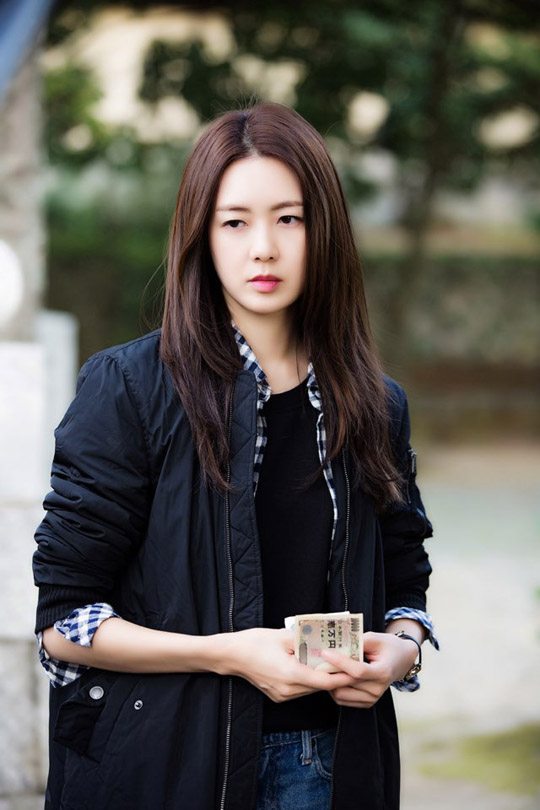 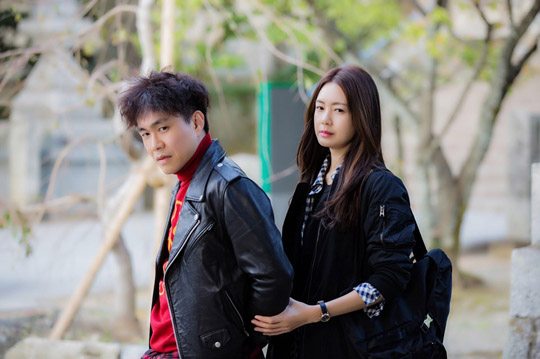 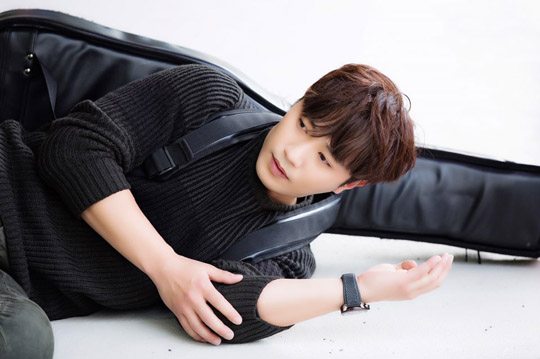 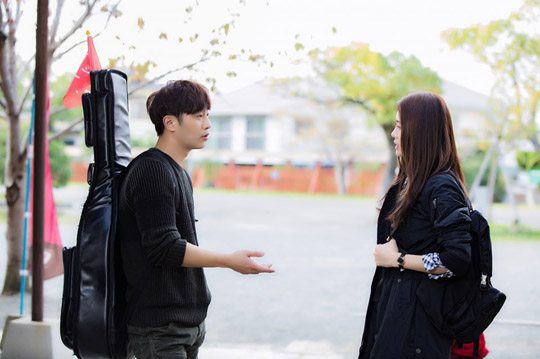 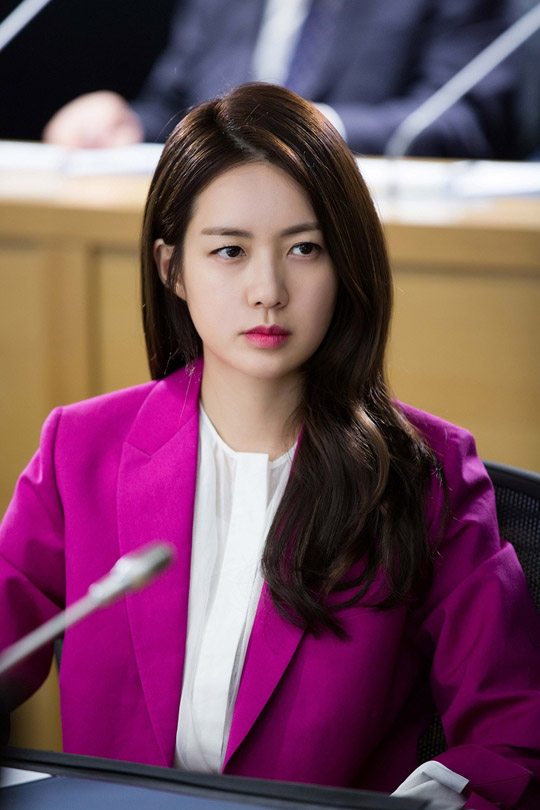 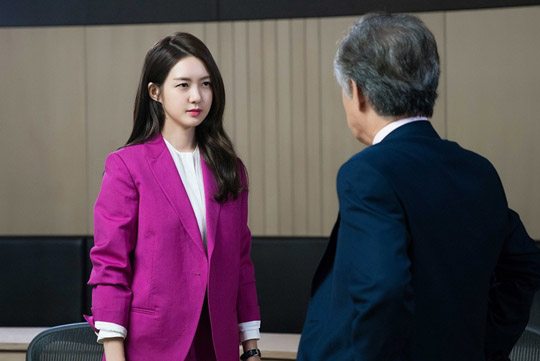 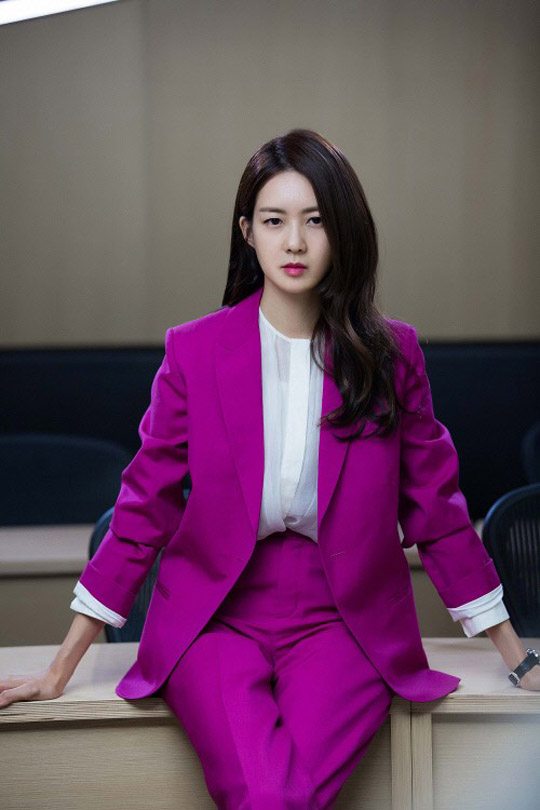 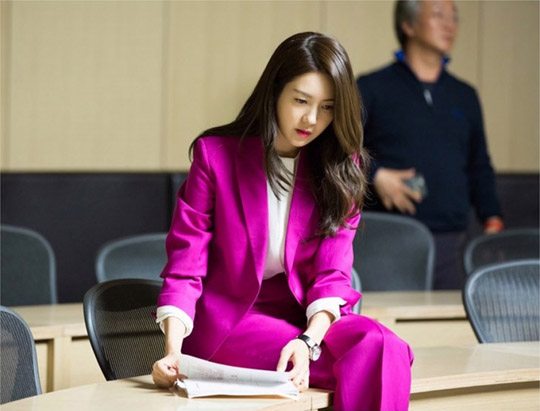 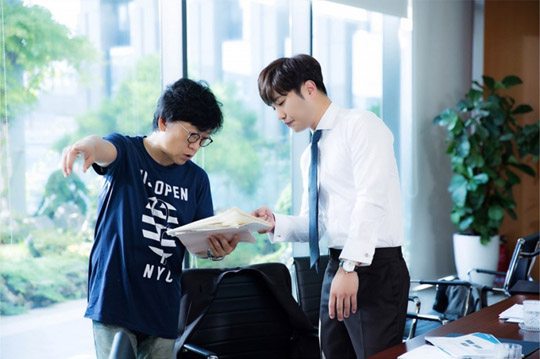 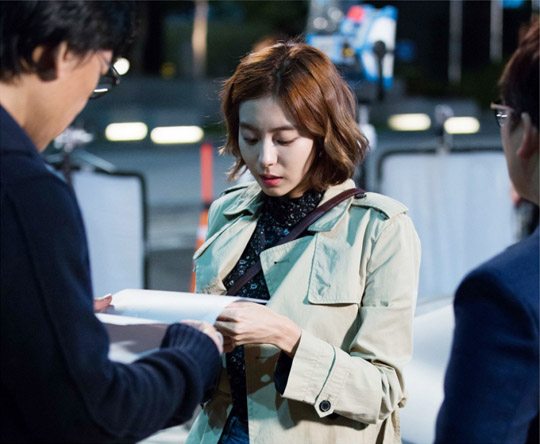 This looks quite intriguing actually. I hope that there is a lot of push and pull btwn him and the 2 ladies and he doesn't just go for one for most of the series so we don't know for sure who he will pick.

Lee Yo Won is so pretty... Ethereal. Yea, that's the word.
This is a melo, right? Ueee is synonymous with melodramas. Not watching. Will wait for Lee Yo Won to do a romcom, maybe next year.

This is the dark show to look for. Let's see where their desires lead them too.

I can't even see their skin past that hideous fuchsia pantsuit. The color is one thing, but the design of it overall... dear god.

Miranda, I'm thinking of printing it out and use it as an amulet to ward off Subway le sandwich~ey.

"annoyingly fairskin" - how about you don't go there, ok?

I could be wrong, but I understood that comment to be about the fake-looking quality of their fair skin - it looks like light glare or an overly enthusiastic make-up job to me.

I'm someone who is frequently called "glow-in-the-dark" and "ghost" (affectionately) by friends and family - my Scottish/Irish skin does not tan, it turns red and then goes back to a pastey, colorless tone, haha. Even so, I was still surprised by how glaringly white UEE's face looked in some of these photos - it was distracting to me.

I just pointed out their need to show the female as white as possible.

Dark girl here but got a bit flummoxed by annoyingly fairskin too. Only cos all photos look enhanced these days and this did not look strikingly different from the endless glossy and glaringly bright style of photographs that Korean dramas seem to like. If anything my eye was drawn to the bright colour clothes as opposed to the beiges and whites that K-dramas really really seem to like!

I actually like the fuschia - then again I am not a fan of our colour averse age.

The drama looks kind of intriguing and focussed on the 2 women. Was going to give it a pass but may check.

It seems interesting, but the plot is still a mistery for me.

Lee Yo Won is so pretty and elegant.

This is the one I'm most curious about. I like Lee Yo-won in Ms. Temper and UEE was fine in Marriage Contract, but most importantly their characters sound interesting. I hope the women take center stage and are equal opponents.

"I hope the women take center stage and are equal opponents."

The second trailer already out as well. ? Lee Yo Won ?? love her hair though.Jin Gu & Uee looks great as well.

This is just so my type of drama?

I hope this drama will be recapped here ;)

I really hope so too..It all depends on the pilot episode..

I am so in for these ladies, though I worry that I might be swayed to rooting for the probably doomed exes. Their meet cute just sounds so adorable.

The vibe of this drama reminds me All About Eve, years ago. The two different personality of ladies. Bring it on! I don't have any Mon-Tue drama to look for and hopefully i will give me a good watch list.

Will we see another Choi Yoo Jin in the making?
It's refreshing to see two female characters in one drama are not the usual Candy characters.

IKR? haha..seems like I still haven't move on.BTW, I changed my name a little coz there's so many of us out here to avoid confusion..

I haven't move on from The K2, especially Madame Choi...

Oh hopefully yes. I don't mind to see another "overacts" actress (as some claimed Song Yoon Ah to be, and I also acknowledged it but it is in a good way definitely).

I don't know if I will change a my name from "The Ms Temper" to something else because this name definitely come from LYW's last drama, because I just love her in that drama so much.

Maybe you could change your username into Sera The Night Light... hehehe

Will See. Or maybe i'll just stick to this one forever :P

Ahahaha..I thought that was really meant to be acted that way. I've watched too many dramas that's why I don't think SYA is the only one who does that. I think if many are used to kdramas, jdramas and cdramas, they will be used to that kind of acting.

Maybe you can change it into something you're very much into..

SYA, Lee Yu Ri, Jang Hyuk among those which in my opinion have over the top acting sometimes (depends on script) but i don't think it is bad thing at all. Some probably are not fan of this type of acting but I am really appreciate this. Because I feel they are not shy and giving all out in their performance - laughing, crying, and all. SYA and LYR - they don't care if they don't look pretty in doing crying scene, they are all out in their performance.

Since Song Yoon Ah already received more popularity thanks to K2, I hope Lee Yu Ri will get more recognition. I have become fan of hers from Jang Bori Is Here.

Yeah. I think it depends on the viewers. As for me, some of those I think have over the top acts are in romantic comedy genre especially when they act funny. But still, I enjoy them all the same.

Is it weird that I would prefer, just from the premise for the Yi Kyung and Gon Wu to end up together? I doubt it'll happen but I love that kind of dynamic/a pairing of personalities like that.

Yeah me too. I so want to watch but I'm hesitant because with this writer it can be 50/50. Will the writer Lee Jae-Dong be brazen enough to defy kdrama norms and tropes by letting a past female love interest who's rich and cold-natured end up with Gon Wu instead of the equally ambitious candy?

We shall let first love wins once in a while ;)

You're not the only one. Yi Kyung - Gon Wu sounds more interesting and it would be refreshing for the male lead to end up with the non-candy character. But sadly I doubt it's going to happen. Here's to hoping for a change!

Lee Yo Won looks so pretty in the magenta suit! :)

Agree, and the black dress with yellow coat also looks so perfect.

Wish I can look as great as her in the same clothes. *cries

14 matcha and the beer

Lee Yoo Woon looks younger than ever and pretty and elegant and I love it!
I don't really interested but I guess I will give it a try

UEE looks great! Intrigued with this drama since they haven't given TOO much away? But can i just say... did they seriously have to go with that hair for Jin Goo?

UEE face is really something else somehow distracting, I prefer chubby UEE, did UEE will same character like her previous drama with SungJoon in this High society?

Nope I think it's the opposite. She starts out poor here and tries to reach the top.

Why oh why I already get this second lead syndrome vibe Jin go-uee#this drama doesn't even start yet hah!!!

Waaaahhh.. Lee Yo Won's character name is the same in 49 Days♥

There is literally never any life in Lee yeo won's eyes. I feel that's why I liked her so much in 49 days. How has she been around this long and yet has not changed nor grown as an actress no shade.

This is giving me High Society vibes for reason, even though I don't think the two shows are even that similar. I'm staying away from this one unless I hear it's amazing.