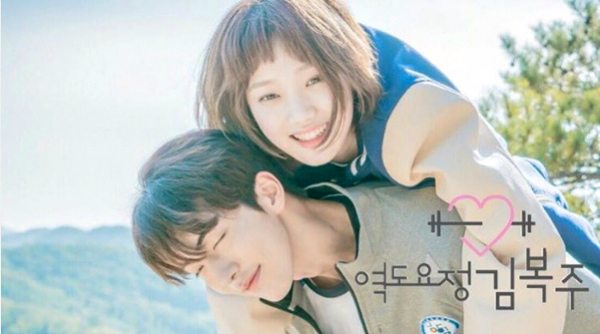 I don’t think the posters for Weightlifting Fairy Kim Bok-ju are anything to write home about, but I do love the general look and feel of this show, awash in pastels and full of youthful excitement. The new MBC coming-of-age drama is about college athletes discovering embarrassing first loves, chasing after their lifelong dreams, and making true friends along the way. Even the stills and teasers put me in a good mood, so I’m hoping the show delivers all the feel-good vibes it’s been promising so far.

Lee Sung-kyung (Doctors) plays weightlifter Kim Bok-ju, daughter of a former weightlifter (Ahn Gil-kang) who now runs a chicken shop. She delivers Dad’s chickens while attending school, and is a shy girl who’s only ever known barbells her entire life. She’ll have two love interests: Classmate Nam Joo-hyuk, a talented swimmer with a trauma he has yet to overcome, and his cousin Lee Jae-yoon, a former swimmer who’s now a doctor at an obesity clinic. The doctor will be her first crush, but it’s clear from the posters that her friendship with Nam Joo-hyuk will turn into something more.

The campus will be full of friends and rivals, of course. Kyung Su-jin (Bluebird’s House) is the queen bee, a medal-winning rhythmic gymnast who suffers from the stress of always being in first. Jo Soo-hyang (Who Are You–School 2015) is her rival gymnast, and Ji Il-joo (Age of Youth) is a swimmer and buddy of Nam Joo-hyuk’s, the one groveling to him in the stills below.

I don’t know why, but this show already feels like the underdog, and that makes me want to root for it. Maybe it’s just the sports theme and I’m projecting, but I’ll cheer for it anyway and hope that it’s as earnest and sweet as it looks. 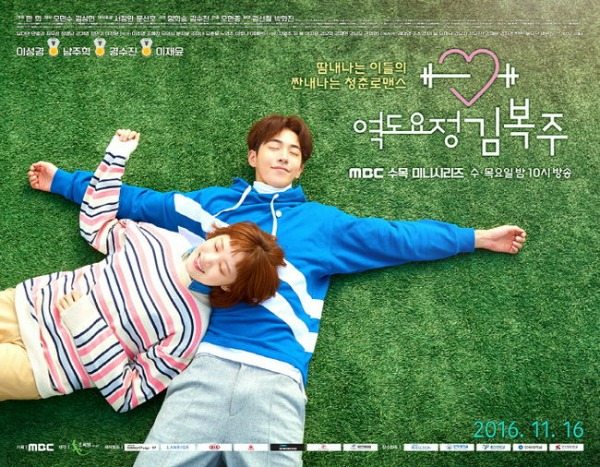 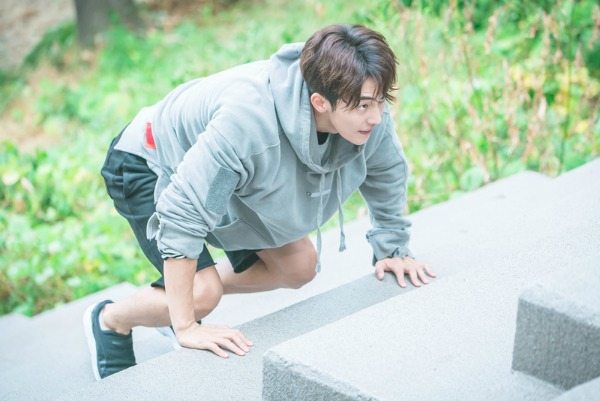 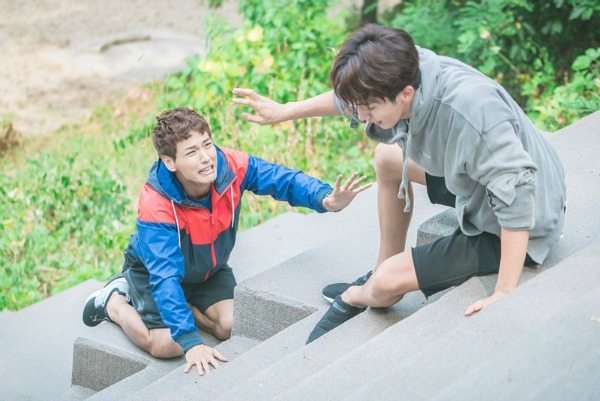 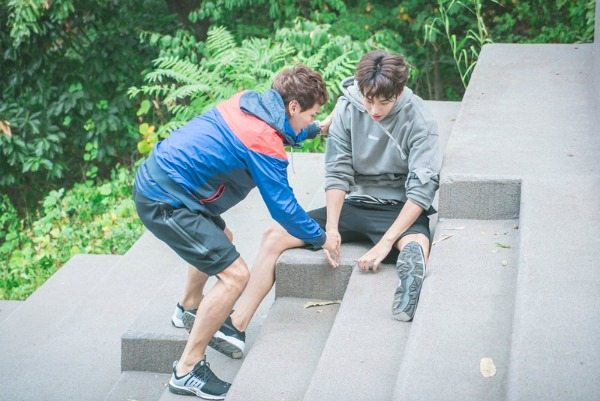 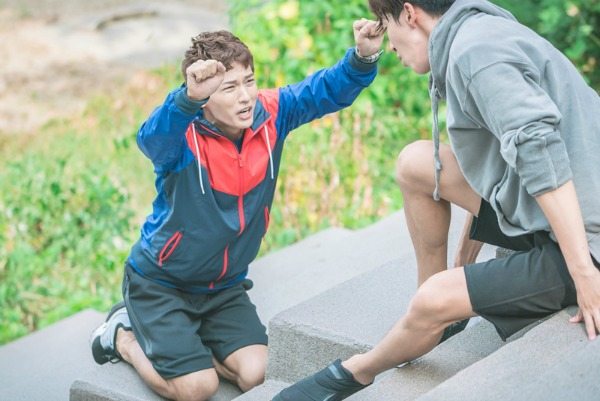 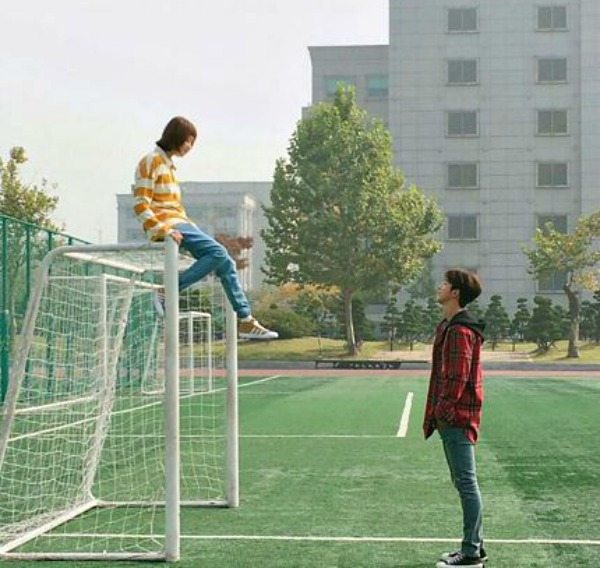 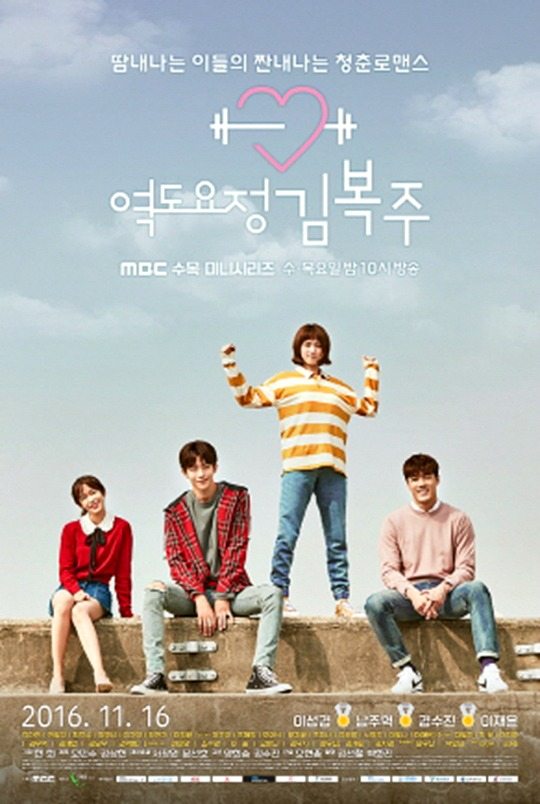 Ahh, douchey boyfriend from Age of Youth! It makes me happy whenever I see someone from that show get cast in another drama. Even if the guy he played was terrible. Eun Jae's sunbae has that drama special coming up too. Someone at MBC must've been a fan.

I hope this is as good and cute as it looks, because I have a feeling I'll have a heart-shaped hole in my soul once Shopping King Louis ends :(

Right now I'm catching up to age of youth(episode 9).. oh I hate his character in the drama soooo much.. I love the show to bits & pieces....

This show looks so much fun.. hope it delivers all the campus hijinks that CITT missed...leads are cute chemistry.. they have a big shoe to fill if they are following after SKL.. I'm not ready to send my precious away..

I love college dramas. I wish they were more common. They avoid the immaturity and teenage melodrama that high school dramas tend to have but still hit all those coming to age feels that make your heart ache.

I hope you enjoy finishing up Age of Youth! It's been one of my top dramas of the year so far! :)

Me too! It was totally unexpected, but Age of Youth is one of my most favorite dramas this year! Been missing it since I finished watching, find it hard to move on other ones. :"(

I've been looking for something lighthearted and uplifting so this seems right up my alley. Will definitely check it out although I didn't intend to watch initially. Too bad it airs on the same days as Legend of the Blue Sea (right?), but as an international viewer it shouldn't matter much to me, just more to watch!

Thanks to his role in Age of Youth, looking at Ji Il-joo now makes me want to smack him in the face :D

shopping king louie & the man who lives in my house are both light hearted dramas ;D

I'm a bit picky. If they haven't piqued my interest or given me some certain feels by now, most likely I won't like it :D Thank you for suggesting! ^^

Haven't watched shipping king, but am OBSESSED with Man living in our house. OMG. And the chemistry! I was so disappointed in the last few dramas (moon, more moon, I'm looking at you too), so I'm thrilled to have a drama I'm excited to watch every week.

Also, 1% of anything is the most adorable, non frustrating drama ever. And has nice kisses :-D

There is much to write about Father I'll Take Care of You and Song Ji Won.

4 Teasers are already up. Except for initial post, nothing much else is updated here. Kim Bok Ju's clothese style surely grabs attention an her being shy and yet overly active feels quite contradictory.

I guess she's probably the type who is shy towards stranger or people she don't know well.. but gradually as she knows them better she opens up to them and show her warm side (as we can see she seems pretty outgoing in her Outing with Sister..)

It's probably some lack of confidence in some aspects or constantly worrying of how people might look/judge at her..

Can't wait for this show to start even if i don't want to bid goodbye to Louie!

You know what? I have not had any drama that I ship the leads just by watching the teasers, b4 the drama even starts. Please I need a warm show like this fast. Definitely watching this <3
I have never known this but NJH and LSK looks sooooo perfect for each other. I ship them too hard right now XD

same i never squeed so much whilst watching a teaser (the second one) so much, they look so cute. I'm a bit apprehensive about the love triangle and hope it doesnt drag too long i just hope the second lead doesnt actually like her back and they just end it there

That worries me too.. that triangle seems like a heavy plot itself already..

hopefully it doesn't outweigh or shadow the story too much.. and we won't get to see alot of dilemma and passive scene

I'm so glad that the main leads were already friends in the beginning. The friends-to-sweethearts love line is the best <3

And the last poster kinda gives a rather old-fashioned feel, like Reply 1988... I like it! Though when I see Sung-Kyung's shirt I can't help but think of Steve from Blue's Clues, lol. Probably the weirdest connection I've made just from a striped shirt...

Her shirt reminds me of Steve, too. Lol I though I was the only one.

I like the youthfulness and brightness of all the posters and stills so far!! I'm on board with this show!

Looks very fresh! Im not yet sure if Im going to watch this, but after Scarred Hearts, I think I need non-hyped or minimally hyped shows to balance hyped shows.

Is Scarred Hearts the new name for Scarlet Heart?! I love it. It is so fitting. Lmbo!

I'm excited to see Lee Sung-kyung in a lead role!

Baek-ah became a swimmer in the present. Don't cry anymore, babe, I want to see you smiling and happy...

I'm so looking forward to this. A little sad when I found out it's on the same timeslot as Jeon Ji Hyun's new drama.

For someone who almost failed P.E. (all my lowest scores from grade school to university are PE related) I really love sports drama/manga/books. Living vicariously through the female lead I guess? There's something incredibly inspirational about watching people who devote their life to one sport and nothing else. Besides watching k-dramas, I have not spent time on a hobby and not get sick of it in a couple of months.

I'm so excited for this drama. In fact, I'm looking forward to it more than Jeon JiHyun's drama, and I'm not sure why.

Oh wait, I know why. I love college dramas, and I hope that it'll be a good addition to my faves!