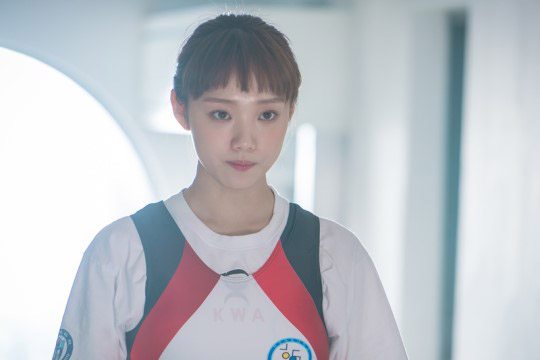 Next week is gonna be a crush of new dramas, with MBC’s Weightlifting Fairy Kim Bok-joo premiering on the same day as SBS’s Legend of the Blue Sea and KBS’s Oh My Geum-bi. They all look appealing in their own way, but all the buzz has gone to Blue Sea, making this one rather the underdog. Which, I think, is an apt enough scenario for the plot, centering around a young woman (Lee Sung-kyung, Doctors) who aspires to be a weightlifter (despite looking like she’d snap under the weight of one barbell), and unfolding around her friendships, budding romance, and story of growth.

The drama has been releasing a steady stream of stills (though not quite as incessantly as its competitor), and the latest set largely feature heroine Bok-ju in training mode or with her friends and teammates. She’s a character who starts out knowing nothing outside of lifting weights and is awkwardly shy around boys, but she’ll grow as she experiences her first love and develops as an athlete.

A couple of the shots feature Lee Sung-kyung with co-star Nam Joo-hyuk (Moon Lovers: Scarlet Heart Ryeo), looking cheerful as she clings to his back. He plays a swimmer and her love interest, and the shoot was also used for the drama’s poster image. They do look pretty cute together, so I hope their coming-of-age campus romance is bright and feel-good.

We also have some stills featuring Bok-ju hanging out with her girlfriends, who are played by Jo Hye-jung (Cinderella and the Four Knights) and Lee Joo-young (A Quiet Dream), who form a tight trio. They’re eating fried chicken, no doubt because Bok-ju’s father runs a fried chicken shop, which she sometimes works at. 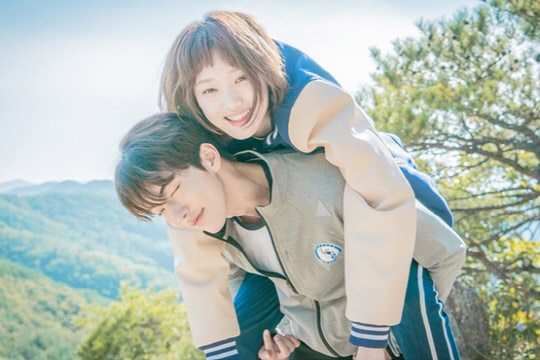 It’s a different atmosphere for the set of young women below them, with Kyung Su-jin (Plus Nine Boys) heading the team of rhythmic gymnasts. Kyung Su-jin’s character is Nam Joo-hyuk’s ex-girlfriend and Bok-ju’s roommate; she’s also the bright star who’s burdened with the stress of expectations. Fitness model Ray Yang (Produce 101) plays the calculating assistant coach who often gets called “witch” for her cold nature. Jo Soo-hyang, who legitimately frightened me as a high school sociopath in Who Are You—School 2015, plays a rising talent on the team who threatens Kyung Su-jin’s star status. I suppose they could always develop into a warm friendship, but I won’t hold my breath—have you seen rhythmic gymnasts? They can twist themselves around in circles to stab you in the back while staring you in the eye.

And last but not least, we have the rest of the weightlifting team, headed by the coaches played by Choi Moo-sung (Uncontrollably Fond) and Jang Young-nam (Dazzling Temptation). I also see Moon Ji-yoon in the mix, who played a boorish sunbae in Cheese in the Trap; in this drama, he’ll be the ace of the weightlifting team, and he looks like he’s legitimately lifting an impressive amount of weight in his still shot.

Overall, I’m liking the drama’s fresh, light-hearted vibe, and even though I really have a hard time buying Lee Sung-kyung as a real weightlifter (I’m trying to get over it! It’s really hard!), I have hopes that she’ll be able to at least convey the emotional aspect of her character, if not the physical. The drama takes up the Shopping King Louis timeslot beginning next Wednesday, November 16 . 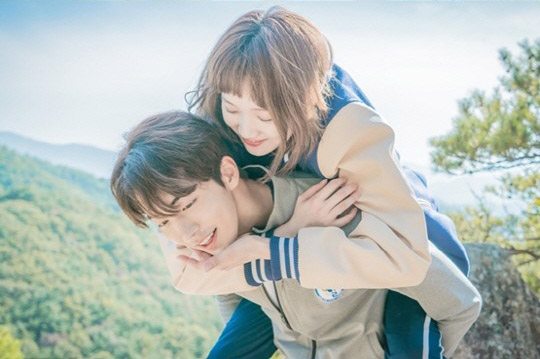 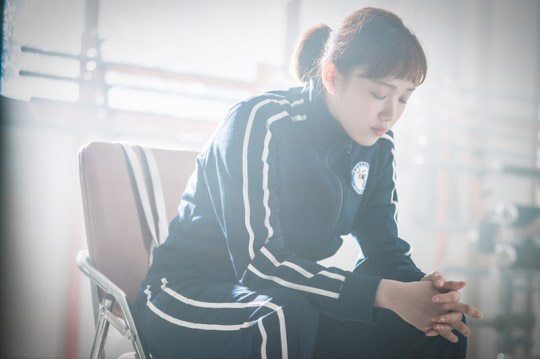 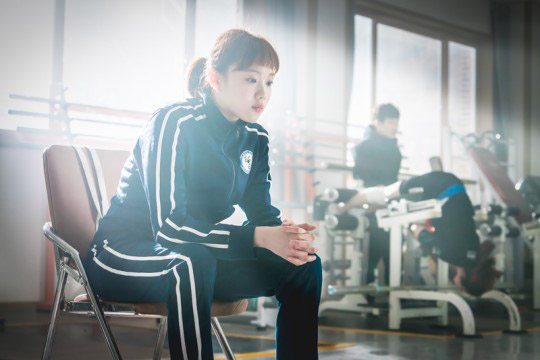 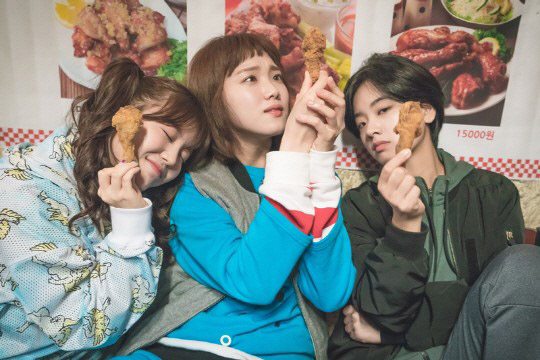 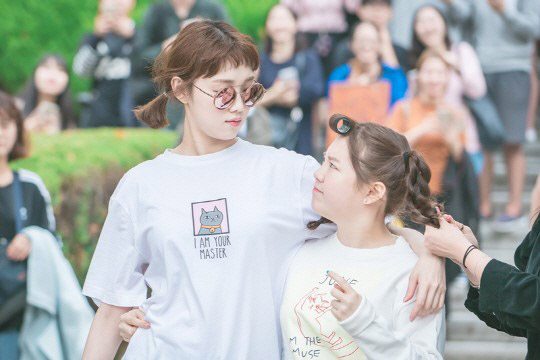 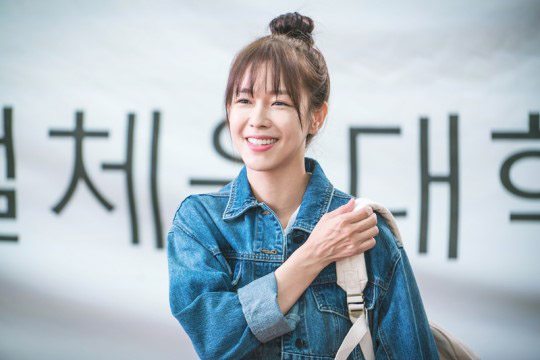 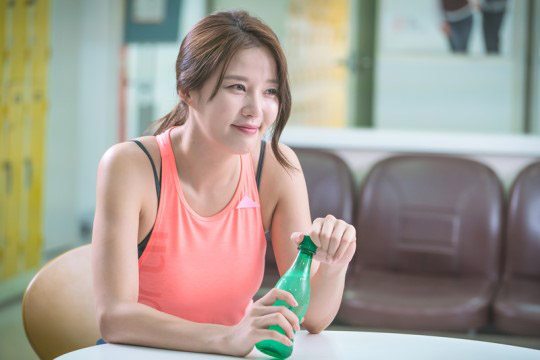 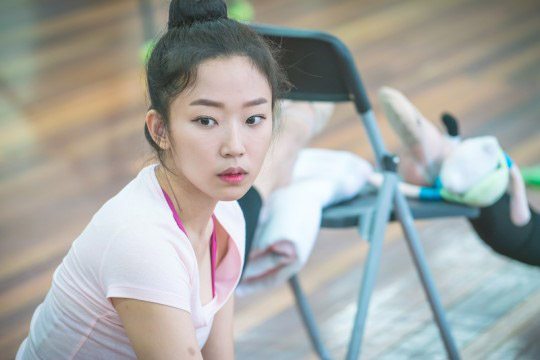 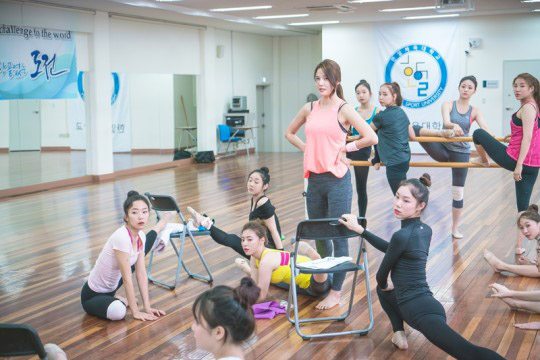 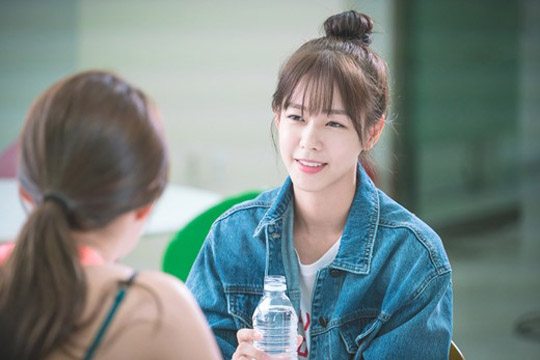 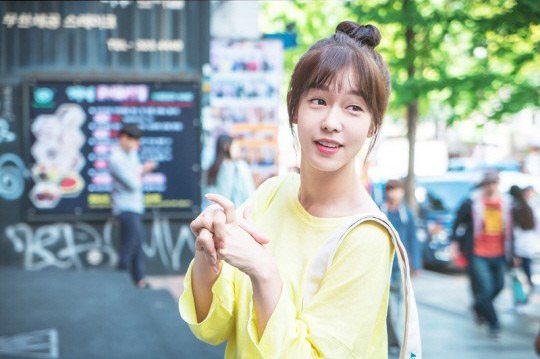 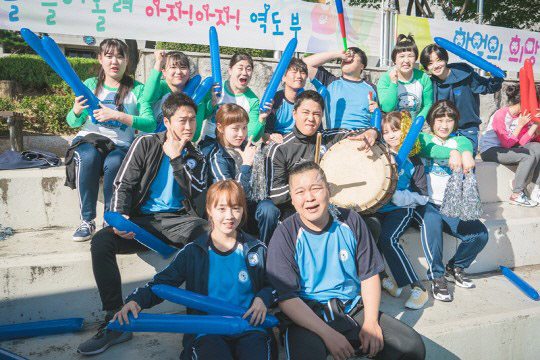 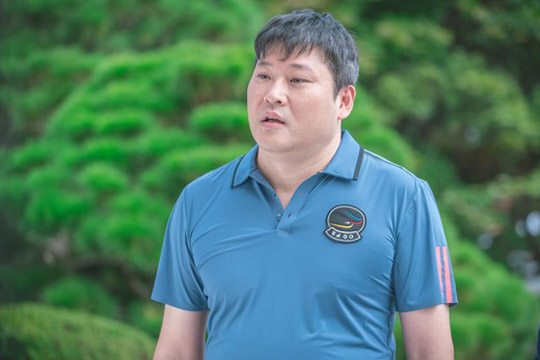 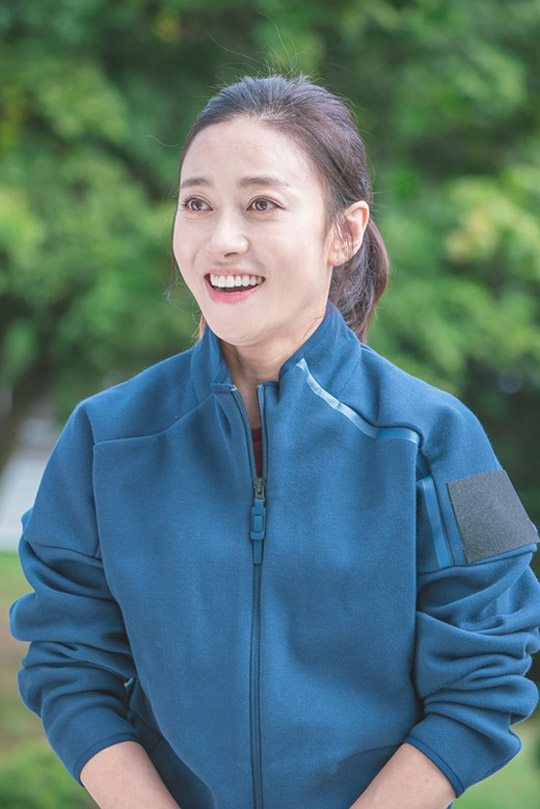 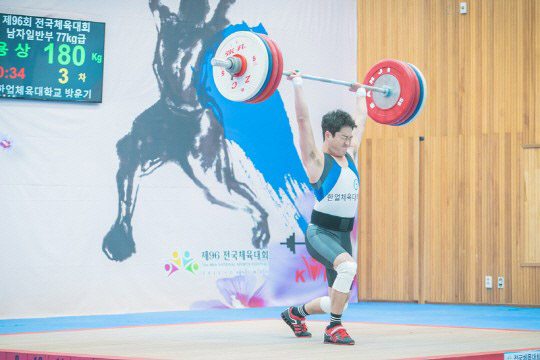 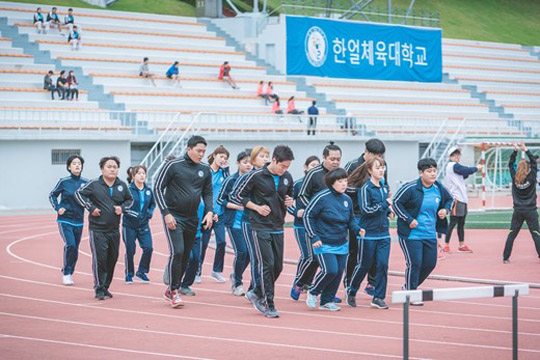 I'm just happy that Nam Joo Hyuk got a lead role! Also, peep her cat shirt "I'm your master". I need it.

I love that cat shirt! The wording is true to life (speaking as a cat slave meself).

Somehow, I'm looking forward to this, more than LotBS...my heart literally skipped a beat when i saw this post...so yeah, I'm rooting for the underdogs ??????

I think more than this Oh My Geumbi is the underdog who have probably not released any teaser yet? Or did I not come across them? Is it really releasing next week because viewers of OTWTTA weren't sure if the show was ending this week.

Ya omy geumbi more underdog than this one ,at least it has eyecatching cast .
teaser 1 on asianwiki

I think WFKBJ and Oh My Geum Bi appeal for quite different audiences, so there's not much to compare. s:

Yes I agree.. I guess people are just looking base on the record of the cast, writer and production..

Looking forward to its story and plot..

Though I think Oh My Geum-bi and Weightlifting fairy are safer in that aspect (since the story are pretty logical and one can relate easily..)

Legend of the blue sea, really must see one (it can do very well or the other way.. and with the hype, it can turn out really well or really bad lols. I'm just praying for SBS not to make further edits and start scarlet heart again)

I dont mean to compare it hehe

Yeah, come to think of it, I haven't seen any teasers for Oh My Geumbi

I'm looking forward to checking this out.

Might be the minority that anticipates this drama way more that the hyped one...Can't wait to see it!

Who knows, this could be the next Moonlight. Underdogs have been on the win this year.

Scarlet heart just didn't even put up a good fight for itself in terms of story production and editing (the acting was good, especially LJK and others.. but a pity, it's all-in-one for a drama, one can't always only rely on actress/actor alone to succeed..)

(I think moonlight deserve the rating though.. it's neither under nor overrated.. they didn't win just because the other show didn't fare well, but they put up a good fight too.. and they didn't lose because they are a underdog, instead they prove it that they can do it too.. and captivate the viewer heart..)

Not buying it. They should casted a different actress (even if I love lee sung kyung).

She just looks like she is wearing an oversized tracksuit. They should have casted someone like lee-si-young.

I think this is gonna be my new obsession!

Since I just finished watching Scarlet Heart: Ryeo last night (I know, I know, very late) I realize Nam Joo Hyuk is looking mighty fine!! In the last 4 eps, Baek Ah seems more mature and more handsome that I'm fangirling over him LOL.. Though I never find him handsome in the other 2 dramas (School 2015, CITT) so this is new surprise and I'll look forward to him and Lee Sung Kyung.
He doesn't look like a bulky swimmer, but then LSK doesn't look like a weightlifter too. Suspension of disbelief badly needed here.

I just hope she does something about that fringe sometime during the drama..... ^^:;

As much as I'm excited about Legend of the Blue Sea, I'm also excited about this one. School dramas have a special place in my heart and the atmosphere this show brings is just light and fresh.

Planning to catch this for sure. Gotta see Joohyukie play lead and I like the fresh, sunny feel of the stills so far. Like the other cast members as well. So glad I can just watch online and not worry about the same time slots. XD

I realize that there are some "Cheese in the Trap" reunion in this drama. Almost a year ago. Nice to see it.

Don't bother about press. Might not always drama which has been buzz will have good ratings (which also say the same to KBS "Oh My Geum Bi"). The important are story and actors' acting. Because, this is sport drama.

Is this drama has the same time slots with legend of the blue sea ?

Good luck my bae Sungkyungie!
Efforts never betray you ~
The drama looks so fresh and adorable

I am confused by your claim. I thought Shopaholic Louis has yet to air Episode 16 next week and that On the Way to the Airport is good for 20 episodes. If so, the dramas will not air all at the same time but in consecutive weeks with Legends of the Blue Sea first, followed by Weightlifting Kim Bok-ju and lastly, Oh My Geum-bi. Can you please enlighten me on this one? Thank you.

MBC didn't adjust their schedule, Shopping King Louis will air 3 episodes this week which means episode 15 and 16 will air on Thursday. On the Way to the Airport Also has 16 episodes (See javabeans comment, 12.2, here http://www.dramabeans.com/2016/11/on-the-way-to-the-airport-episode-14/).

I actually like the story of this one because I love dramas set in schools so I'll definitely watch this one. Yeah, LSK may not look like a weightlifter and I think that's the reason why she wore a lot of sweatshirts to add bulk to her frame. I think that if this was pre-produced then she has more time to bulk-up.

Really loving the teasers~ I've been watching the newest video teaser a lot since it was released, and I can't get over how cute it is, haha. I'm wishing this show the best!

i want to be more positive for this team because Moonlight was the underdog against ML.

but hey who am i kidding, they are no Park Bo Gum & Kim Yoo Jung. Just hoping they can get decent ratings, i'm fond of Lee Sung Kyung, so for her sake, i hope this will be a good medium for her to strengthen her position as a leading lady.

Nam Joo Hyuk, not too sure? lol

I'm so excited to see this. Much more so than LOTBS.

Maybe it's due in part to the casting of Lee Sung Kyung. She's so pretty and so goofy (in a good way). I like her. :)

Here's to hoping we have a Cinderella story in this drama's performance.

omg I thought I was the only one who is more interested in seeing this drama than LOTBS, which is being relatively overhyped by sbs...