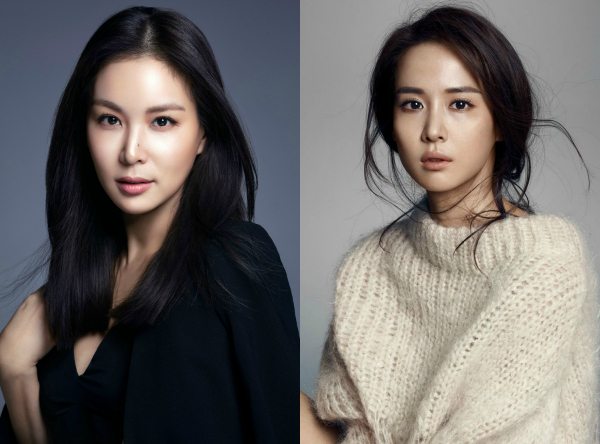 Nineties It Girl Go So-young (Beat, Gumiho) might be making a drama comeback, after taking a ten-year hiatus from acting. The actress married Jang Dong-gun in 2010 and became a mother soon afterwards, and she is currently considering an offer for the lead character in the new KBS Monday-Tuesday drama Perfect Wife. Actress Jo Yeo-jung (Babysitter) has also received an offer to co-star.

Upcoming drama Perfect Wife is about a middle-aged ajumma, Shim Jae-bok, who rediscovers herself and her inner feminine strength in the face of hardship. She’s the type of person who cannot ignore injustice and is revolted by condescending pretension. Despite hating false flattery to her core, she grits her teeth and bows her head to the people who think they are her social superiors, because she wants the best future for her family. After living so long as a wife and mother to her two children, Shim Jae-bok has neglected herself to the point where she’s almost lost her sense of self. When she becomes involved in an unforeseeable incident, she learns to regain her identity and fall in love again.

During the nineties, Go So-young made audiences go wild with her beauty, marked by her characteristic nose freckle. Although she has still maintained a formidable presence in the Korean entertainment industry through her numerous CF campaigns, she has not forayed into acting since her last drama Blue Fish and movie Project Makeover both flopped in 2007.

Jo Yeo-jung is still thinking the offer over for the new series, and as of yet, her character is unspecified. From what I’ve seen, the two actresses have very different styles of acting. Jo Yeo-jung shines in lighthearted rom-coms like Divorce Lawyer in Love and I Need Romance, whereas Go So-young tends to be more successful in melodramas. So I’m interested to see how their collaboration would play out.

can i just say these two women are flawless... they are so gorgeous like damn. i remember watching jo yeo jung in babysitter and that movie with shin seung hoon and i was just in awe the whole time

This sounds like a very interesting plot, something more real for women in general, that you can relate to.

I miss Jo Yeo Jung. She excels in serious acting, too, if you watch her movies. I wish she choose drama that I would watch.

Go So Young is beautiful but she's just a moderate actress unlike Jeon Do Yeon and Kim Hye Soo who are just the same age bracket as her. She even had a long hiatus that's why I'm skeptical about her.

Sameeee
I never watch her project too
but i see in nb,seems like her acting is so so

+1 I have watched her projects (and remember to read story about her including her street casting days) and it was disappointing to say the least. Good thing she didn't act being busy doing something else. Really hope she took some acting lessons. I have to say thesedays there are so many great actings that 'foot/bad/awkward acting' stands out.

She's known more for her beauty. I love this age group of actresses, (the talented 40s) who are still kicking butts in their field. Jeon Do-yeon, Go Hyun-jung, Kim Hee-ae, Shin Eun-kyung, Kim Hye-soo, Chae Si-ra, Moon So-ri etc. Some are well known on the big screen and some prefers tv.

I wish I was excited about her like when Go Hyun-jung returned to television. She was even better than I remembered her and she made Mishil one of the most unforgettable villains in drama land.

Jo Yeo-jung is deserving of the lead role if we are looking at the more capable actress.

I've never seen Go So Young's acting, but have read about her, some of it not so complimentary. I'm curious to find out what kind of an actress she is.