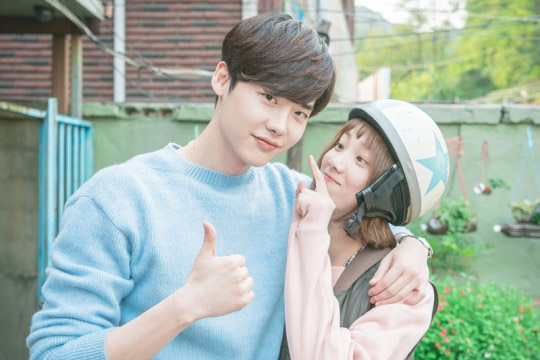 Aw, it’s Lee Jong-seok (W—Two Worlds), making a cameo appearance on Weightlifting Fairy Kim Bok-ju, and he looks as bright and fresh-faced as ever. That suits the air of the drama, which is going for an uplifting coming-of-age story of love and growth among our young characters, in particular our heroine Kim Bok-ju, played by Lee Sung-kyung (Doctors), a twenty-year-old aspiring weightlifter.

I was searching my brain for Lee Jong-seok’s connection to this drama, since it wasn’t immediately obvious through the writer, Yang Hee-seung (Oh My Ghostess, High School King of Savvy), or the director, PD Oh Hyun-jong (A Daughter Just Like You, A New Leaf, Medical Top Team). It turns out that Lee Jong-seok is reportedly good friends with lead actress Lee Sung-kyung, and his last drama, W, was produced by the same production company, Chorokbaem Media, that is doing Weightlifting Fairy. The two dramas are also both MBC Wednesday-Thursday series, airing just a couple months apart (with Shopping King Louis sandwiched in between). Mystery solved.

Lee Jong-seok’s cameo was filmed in mid-October in Seoul’s Nowon District, at the set of a fried chicken shop that’ll be run by the heroine’s father (Ahn Gil-kang)—and I’m pretty sure it’s not a coincidence that Dad’s name, Chang-kul, is just one drunken tongue-twist away from Kang Chul. Heh. Lee will play a customer at the shop who ends up chatting with Bok-ju and her uncle, who both work there.

Uncle offers up another connection to Lee Jong-seok: He’s played by comic actor Kang Ki-young, who had a small role in W as Han Hyo-joo’s doctor colleague, although not many of his scenes were with the hero. (Kang is also a regular in the writer’s past dramas, with scene-stealing bits in both Ghostess and Savvy.) I just hope the cameo isn’t one of those blink-and-you-miss-him kinds, which always feels like a waste to me, even though I know that’s the nature of the cameo. (I can’t help it! I always want moooore.) 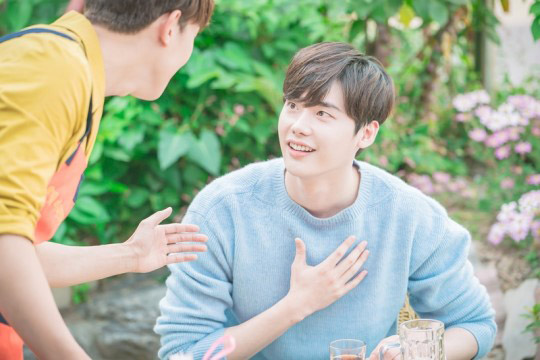 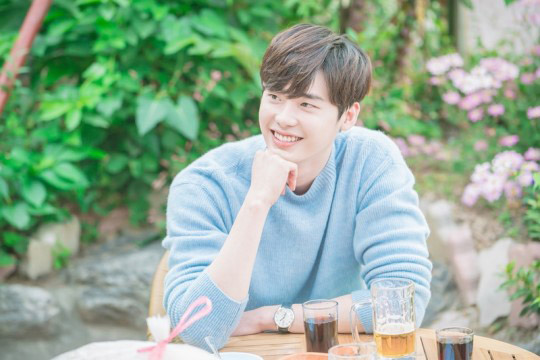 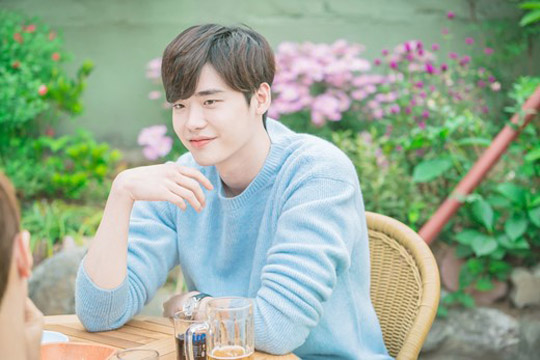 Me, too! *Grabs popcorn, takes a seat to wait it out*

I'm such an easy fan, I'll take whatever I'm given.

YES. Chocolate for everyone, let's swoon in style!

*practicing how to screenshot LJS's cameo in case I miss it*

Awww...
This friendship is so cute. I hope yoon kyun sang makes a cameo too

They're both under YG Ent.

I was gonna say

And the male lead, Nam Joo Hyuk too.

quite on an unrelated topic (well, sort of)- have you seen the news about Lee Jong Suk, Lee Jun Ki, Ji Chang Wook, Park Hae Jin, EXO‘s Kai, and Taecyeon all in one (yes you read that right, ONE!) web drama? isnt that one too many wet dreams to be contained in one measly drama?? i both envy and pity the lead heroine at the same time lol, she's going to drown in all that pretty

The heroine's head will explode, a la EXO's "Lucky One" mv. I know that's how it would go if it were me!

The naive rich kid I can take or leave. ? Sorry Taecyeon!

Exactly! Who said you can only have one first kiss. They will all be first kisses, with each of them! :D

That will be one drama worth keeping and re watching for the rest of my life ....

We thought IU saved a nation in her past life after Scarlet Heart bombarded us with promotions, but after the final episode of SH, maybe she just saved a kitten.

The lead girl of this drama though (if it's real) must have the one who saved a country!

It's Choi Ji-woo, haha. I love her, but she's too old for some of them. I hope he gets to kiss Lee Jong-suk because I totally would.

*brb praying at the same temple as Lee Cho Hee, Go Ara, and IU. Girls have tons of luck this year related to handsome men.*

Wait!... where is the location of this temple, I need to pray as well

oh...another one...LEE MINHO ALSO HAS BEEN ADDED to the line up.

Oh, Dear Lord, that sounds like the best kind of hell.

Lee Jong Seok-ieeeee!! ^__^ yes I hope the cameo wouldn't be tooo short too!!

Lee Jong Suk looking cute and adorable as always. ?? When is he coming back to dramaland??

This drama is looking better and better, not only they have adorable leads, now they included a cameo from the cuteness overload that is LJS :D ... I must check it, hope this is the type of feel-good show with a touch of romance that I need for my cold autumn evenings...

LJS looking fresh and young with that hairstyle. I read about Park Hye Ryun's new drama next year which rumoured LJS as a possible candidate.

Yeah, I always want cameos to last, you know, like 16 episodes. Haha

Heol. This made my day. It would be better if their screen time is like 60 mins.

Worst cameo - Yoo Ah In in DOTS or Seo Hyun Jin in Ghost?

Worst Cameo: Park Shin-hye in Entertainer (blink, and you miss her).

Best Cameo: Lee Jong-suk in Potato Star, since he played his 'I Hear Your Voice' character, there!

Ohhhhh really? I don't remember Potato Star anymore, I only caught a few episodes (despite my love towards Yeo Jin-goo) and I can't recall seeing Lee Jong-suk there :( I need to go back and watch that certain episode.

Also if I may add, falls into the Best Cameo category are Ma Dong-seok in Police Unit 38, and Doo-joon in Let's Fight, Ghost!

Yay! Everything in this timeslot has been so golden (to a point), I hope 'Weightlifting Fairy Kim Bok-ju' can keep the chain going.

I am just hoping that he'll do a drama next year before he enlists in the military.

Kinda unrelated but it seems like everytime i see lee jong suk his shoulders get broader......

Ikr!!! I can't keep my eyes off his shoulders for some reason!

I had 0 interest in this drama because none of the casts interest me (yes LJS too) until you mentioned the writer - I LOVE LOVE Savvy & Ghostess, both are on my top 10 favorite Kdrama of all time! Might give it a try afterall.

HE SOULD MAKE A CAMEO IN SHOPPING KING LOUIE!!!

Aaahh! So many new dramas look promising, I am conflicted about what to watch. The man living in our house as well as this week my wife is having an affair seems to have mostly good reviews, so I don't know whether to wait till this drama premieres because the trailer looked fun or start one of the above. Then there is legends of the blue sea which I will definitely watch. Romantic doctor teacher Kim doesn't look that bad either, also I am not watching any Monday-Tuesday dramas as of now. But, i have always liked to watch character growth stories because they inspire me to become a better person too, lol. So, yeah conflicted. If only I could watch all of them!

To reduce eye fatigue while working with computer, take a pause every 20 minutes to look at an object 20 feet away for 20 seconds, or just keep staring at your computer screen if Jongsuk is on it ?

Share some photo of him in green haha.. I would filled it in my room

Speaking of green, Seo Kang Joon wore a total green outfit (use as a comparison to a watermelon)

He's not wearing green in the 2nd pic but i bet he brightens up your screen nonetheless ?

Their friendship is so adorable.
Jong Suk, Sung Kyung and Kyun Sang studies scripts together over the holiday, hang out at each other's house, supporting each other's project and so on
Too cute for words.
Now I am praying hard for Kyunsangie 's cameo please <3
A "puppy" fanboy "wink wink"

I wish his character will be like a grumpy customer always complaining about the chicken and looking for context. XD

Ah, the word context that'd probably haunt us for life.

Their main professional connection is that they're both from YGE... but yes they're good friends from their modelling days

They also happen in the same agency, YG. No surprise about this. But, can't wait the drama.

I've known about this cameo for a while and squealed when I saw the pics of LJS!! Can't wait!!

It's always good to see LJS in a drama, even if it's just a cameo. I hope this drama does well from the beginning until the end. The live-drama shoots tend to always cause a dip in the story line somewhere along the way...

Most common dip it seems is due to bias from audience reactions and they try to work on that and make a bigger mess (like giving more scenes or increase his portion of the role since audience like him.. some shows are wasted because of this and seems to deviate further and further from the initial outline)

I think it wouldn't be a problem if the planning or writing is done well enough..

Anyway this show started filming in sep.. I think it should be ok..

Can't wait for his cameo!!