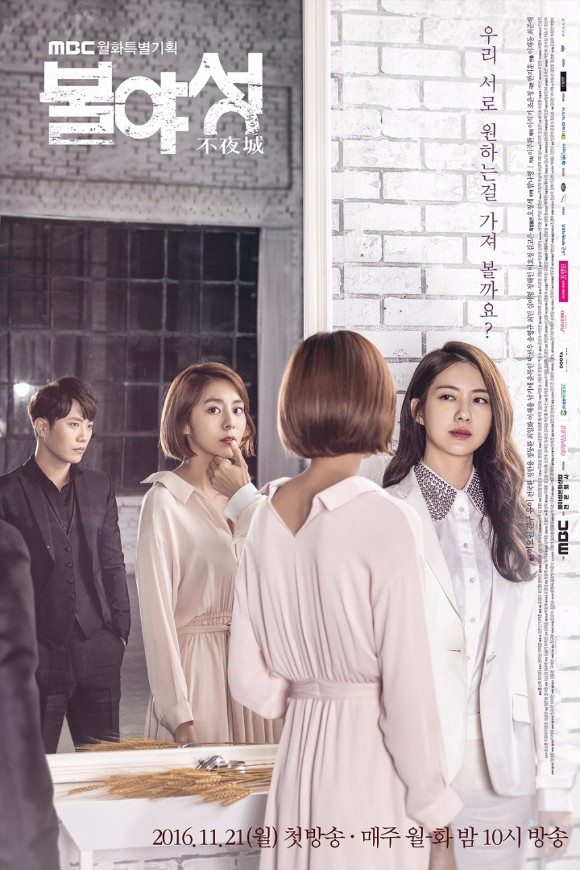 Our three leads for MBC’s upcoming Night Light are looking fierce in the official drama posters. Lee Yo-won (Ms. Temper and Nam Jung-ki) plays a cold, calculating woman, with an obsession and god-like talent for making money. Her love interest is played by Jin Gu (Descended From the Sun), who is the opposite of her, a warm-hearted chaebol heir who freely gives into his emotions. Their relationship is complicated by UEE’s (Marriage Contract) character, who is described as a bundle of ambition. Night Light will draw the story of how they come together and duke it out in the ultimate fight for control and power.

The first poster already reflects the start of a complex love triangle, with a caption that says: “Shall we go take possession of our desires?” UEE stares at Jin Gu’s reflection in the mirror, while Lee Yo-won stares at her. UEE’s character comes from an underprivileged background and she has an all-consuming need to climb higher and elevate herself to a place where she will never again be touched by poverty. So it’s understandable that her greatest desire is Jin Gu, whose family’s wealth could get her to where she wants to be.

Jin Gu, meanwhile, is gazing at Lee Yo-won. According to the plot synopsis, she is his first love from twelve years ago, and he only starts falling for UEE because of her resemblance to Lee Yo-won. In the drama, Lee Yo-won meets UEE through a chance encounter and recognizes that she has the same ambition that Lee Yo-won has inside herself. Having a philosophy where greed is not a deadly sin, but a great virtue, Lee Yo-won begins to nurture and train UEE to become her shadow persona. What happens when the shadow decides to become the master? Nothing good (at least according to Peter Pan).

The second poster shows Jin Gu’s side profile, and within him are the two women who have taken over his thoughts. It reads: “Sleepless Lights of Avarice.” Lee Yo-won gives a menacing smile, which has gotten me excited because it reminds me of her Queen Seon-deok days. From all the promos, it looks like Night Light will be an exciting ride, with the heart-pounding thrills of big stakes and even bigger risks as everyone tries to claw their way to the top.

Beginning November 21, Night Light will fill the Monday-Tuesday slot that Woman With a Suitcase just vacated. 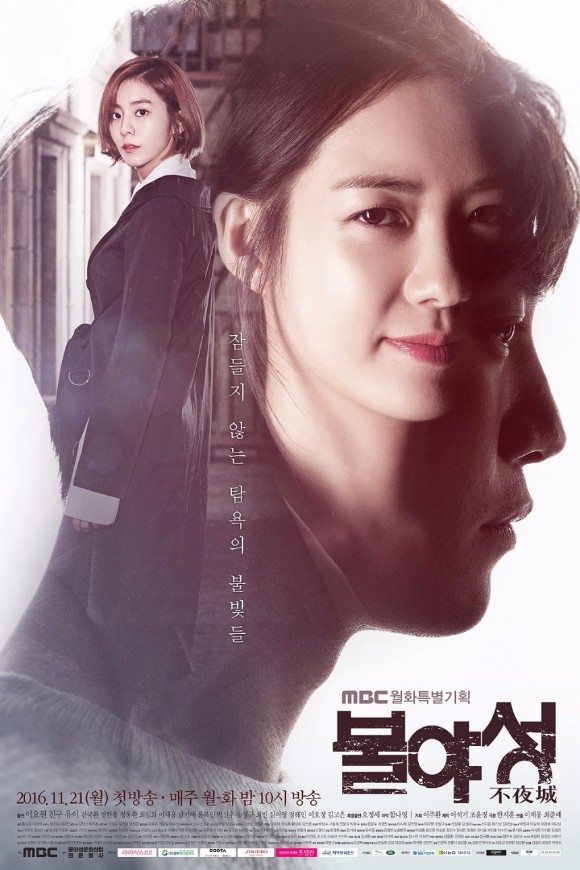 Haha ! Actually, I got the Queen Seon Duk's Mishil feeling watching lee yo won !!! I am just so happy seeing her back in dramaland in this kind of production. She really is a versatile actress !!! None of the part she ever played where similar to each other !

Yoohoo hands up for this drama

Counting days for this drama to start? I hope it lives the expectation. This drama will is giving double excitement because both female leads are strong. Lee Yo Won's glare & smile give me chills, and Uee's face is like saying I am ready to do anything ?

Looking forward to see this!

I love when Lee Yo-won plays strong female characters! I just loved her in Empire of Gold and I never got around to watching all of Ms. Temper but she was great in the two episodes I watched. I'm looking forward to this^^

I liked her in QSD but Empire of Gold made me her fan. She basically nailed in every serious, cold character. Ms Temper was among her best work that I have watched.

I LOVE her in Empire of Gold. Empire of Gold is also an oddball, being interesting though the majority of the scenes are people sitting on the chair, just talking.

She is also good in Ms. Temper. I also like that drama.

Even though it's a pity that they wasted the electrifying chemistry between her and Go Soo.

I don't know, I just get the 'female version' of Shanghai Bund vibes in the modern looks. One is pure but actually not that innocent, one is strong but actually very needy.

This drama is consuming my life. I might give in to watching it. If I don't wrote the entire story during all this promotion. UEE hwaiting!

... so in reality the pure-hearted candy character is Jin Gu?! And he's being fought over like a piece of meat by the two alpha ladies? LOL I'm sold!!

Lol yep! That's what has me looking forward to this show. It seems to be about the two female leads with Jin GU being the third Wheel. I hope it goes like that! I want to see a complex relationship between two women.

Looking forward to another great drama with Uee!

I like the posters. And the premise sounds like it has the potential to be a good, intense drama. Hit me, I'm ready!

10 matcha and the beer

I like the second poster. Dramabeans should make award for best poster at the end of the year.

oh, you're right! they definitely should!

This drama among the ones done the poster right.

I agree!! Usually, I don't like posters where the characters appear to be inhabiting one another or sprouting from each other. But these one goes in line with the psychology of the show. Especially the first one. I feel like it speaks so much, with the way the characters are positioned, how their looking at each other and the pieces in the photograph.

I really love the posters too!
The posters give understated vibe while still manage to convey the emotions and message of the show.

I always love Uee in short hair and Lee Yo-won looks gorgeous in all those posters. Can't wait!

One question though, whose hand is it on Uee's chin in the first poster?

I think it is Lee Yo Won's hand.

I'd be super thrilled if that's Lee Yo Won's hand!!

I think it is Lee Yo Won's hand, considering it is a white suite

I'm sure it is LYW's hand because it is white suit. It made me super thrilled as well, maybe it is just like a sign of LYW's character wants to ensure she can control Uee's character in this drama. I don't know I am not really good in interpreting poster?

So excited, can't wait for me monday.
My Lee Yo Won :)

There's something wrong with UEE's mirror reflection? Her left hand is supposed to be bended at the elbow...

And if LYW end up with Uee, that would be epic. Can we have a drama where the story not end up with a couple in love, but a super strong bond of girls! Girls always rule dramaland anyway!

How was that menacing? That was more of a knowing smile. LYW plays cold or traumatized well and she sure is picky with her projects; she only plays characters that suits her face and personality well. Still, I liked her from QSD but she was shadowed by GHJ. I loved her in Empire of Gold where she got her equal share to shine. 49 Days.. hmm but her recent project was also fun. I basically like watching LYW in her bad-icy character, principled or amoral.

The contrast of Jin GU, the apparently good and warm hearted one and Then the two ladies with cold and greedy personality: Lee Yo Won, ice Queen in white, UEE, in off-white/blush pink? I think its deliberate.

Looking forward to checking this out.

I'm really looking forward to this drama! It looks like it will have great female characters.
But does it bother just me that in the poster above UEE's arm is diferent in the reflection?
It is not stretched and it shows stretched in the mirror.

Anyone else reminded of Cheongdamdong Alice with the plot? Now I hope (and bet money on it) that UEE's character won't end up anything like Moon Geun Young's character towards the end... *shrugs*

Also, I feel like it's been a while since I've seen good, intriguing posters. I really like these.

I just wanna Jin Gu to end up with Lee Yo Won!!! asdfghjkl
First love should win! And enough with fall in love with "someone similar to my love"

Idk but I've been really excited since the project first announced and we get three leads capable of delivering roles. UEE is an idol, but at the very least she's not as bad as the others and can hold candle with the real actors. I'm stoked for this one, for sure!

Can you say girlpower? I'm sold!