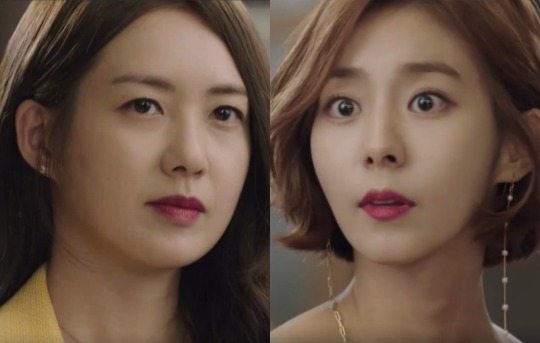 The second teaser is out for MBC’s upcoming Monday-Tuesday drama Night Light, written by Han Ji-hoon of Last and directed by Lee Jae-dong, whose previous works include I Miss You and My Blooming Days.

Night Light is the story of three individuals propelled by their undying greed as they clamor for wealth and power in order to reign supreme at the top of the food chain. Lee Yo-won (Ms. Temper and Nam Jung-ki) plays Seo Yi-kyung, a cold crystal of a woman who believes avarice is not a sin and is dead-set on creating her own “kingdom” of which she is sovereign. Jin Gu (Descended From the Sun) plays Park Gun-woo, a warm-hearted, free-spirited man of integrity who also happens to be a second-generation chaebol heir. UEE (Marriage Contract) plays Lee Se-jin, whose hidden potential and rapacity is spotted and drawn out by Yi-kyung, allowing Se-jin to quit her dirt-poor past and begin anew. The three battle their way to the top and make up a dangerous love triangle.

In the teaser below, Yi-kyung loads a pistol and brings it right up to her temple. Without a trace of fear in her face, she declares, “The one who gives up first loses. That is the rule.” We then see Se-jin as a parking attendant and, later, barefoot and drenched in the pouring rain. She asks Yi-kyung, “When you don’t have money or connections, every day is urgent. But you wouldn’t understand that kind of thing, right?”

Next, Gun-woo watches with concern as his father gets accosted by news reporters, and he says, “Whatever it is, I do things my way.” Yi-kyung and Se-jin stand before a mirror and when Se-jin asks if she can become like her, Yi-kyung answers in a steely voice, “You should ask yourself that, Se-jin, if even for a brief moment you want to be like me.” The desire is definitely there because the final shot is of Se-jin determinedly introducing herself as Seo Yi-kyung.

I’m drawn to Yi-kyung and Se-jin as separate individuals, but even more interested in the relationship that’ll form between them. Yi-kyung may start out as Se-jin’s ruthless mentor, but she’ll probably lose control of her protégée once Se-jin learns to play the game on her own. Will Gun-woo end up with first love Yi-kyung or the Yi-kyung Se-jin is becoming? I’m holding my bets on this one.

MBC’s Night Light will premiere after Woman With a Suitcase on November 21.

Whoa, you can feel the tension.

Is this Lorde playing on the background?

I got so distracted just listening to the music...It definitely sounds like Lorde and I think the last teaser also had this same song..? But I've never heard this song before...

Other than that, I'm so looking forward to this drama! The intrigue is definitely there, and the love triangle sounds so different!

yeah, I was captivated by the song, but couldn't understand a thing.

but really reminded me Lorde!

Thank you! I didn't know this song.

It was never a single, but it's from her first album. I'd recommend giving the full album a chance if you liked her other songs. It's good for when I'm in a certain mood, sort of nostalgic.

Technically you should say "loading a revolver", not "pistol".
"Pistol" usually means a semi-auto, with a spring-fed magazine, so even if you only load one bullet, that's guaranteed to be the first shot. Russian roulette is really, really not recommended.

hahahaha i thought the same thing! how do you play russian roulette with an auto pistol?

Ooh, thanks for the lesson!

Not sure if I'll watch this considering l'm not a fan of the 49 days actress. She has such a bored expression on her face in almost all her pictures. Uee looks amazing, l love the short hair look on her. She looks all grown up!

I feel the same, on both actresses. She looks bored herself.
I've been looking forward to Jin Gu's new drama after DOTS. Unfortunately, this story isn't my cup of tea.

Me too. I thought she didn't really hit the right notes with her acting in 49 days. Though I liked her playing the lively character a lot.

But here she looks really bored instead of greedy and ambitious. I don't think I'll be able to watch even though I really like UEE.

I'm feeling quite the opposite, I like both lee yo won and uee, the former a bit more than the latter, but not feelng jin gu here. He seems to be the misfit one compared to the two women who look a bit more empowering.

I agree. His character seems bland as well.

I really liked her in Ms. Temper and Nam Jung-ki! But it was the only drama I watched with her.

I love both these actresses and I am PUMPED. My dream ending is that one of them wins the love triangle but loses the war and we see if either of them is happy with their lot. I hope it gets as dark and Shakespearean as it can be.

My dream ending is i want both be the winner (is it too much to ask?) and the best woman win the guy..

But it will be much more interesting if the friendship remains. Especially between the women.

I want this to be very, very dark with the women characters like a combination of Kim Rae Won of Punch and Kim Tae Hee of YongPal.

And I want a really intense chemistry between the female leads, kind of sexual but not really. That'd be nice.

My only wish is that they wouldn't make one female character too villainy and the other too bland, looking at you the K2.

Is this going to be kind of like Cruel Intentions?

ooooh I just read the synopsis for that...hmm looks like I'll be watching that now then..

Wow, so much tension from the teaser alone.
Let me guess, first LYW's character is bad and UEE is innocent but after got trained and she knows money, UEE become greedy and wanna have all money for herself while LYW character become better since she know she lost everything. I want this drama become a mirror for everyone that you should thankful for whatever you have.
Looking forward this drama.

This is the impression I'm getting, as well, about how the story will go. I'm interested to see how the drama will shape up. I'm a fan of all three leads.