A wintry walk toward truth and justice in Solomon’s Perjury 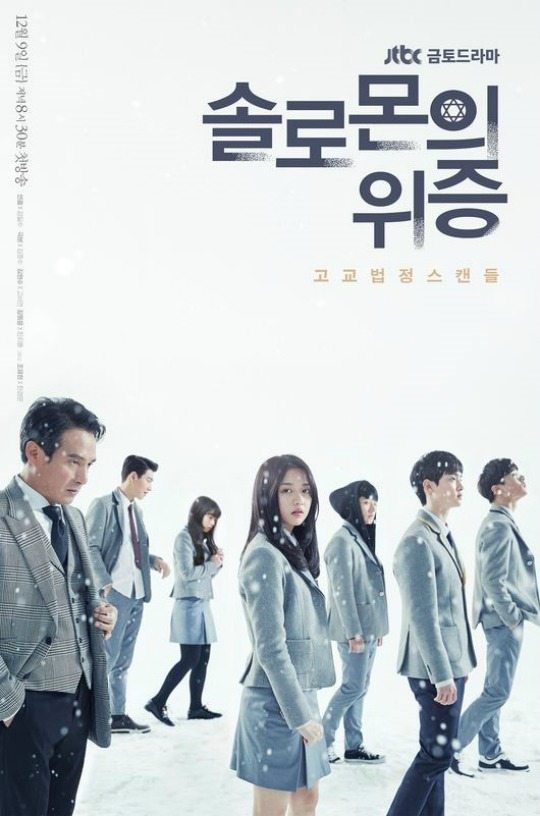 Another poster and teaser are out for JTBC’s upcoming mystery thriller Solomon’s Perjury, which is directed by Kang Il-soo (Jeon Woo-chi), written by Kim Ho-soo, and based on the bestselling novel by Japanese author Miyabe Miyuki.

The poster skillfully sets the bleak tone of the drama. On a snowy Christmas morning, high school student Lee So-woo (Seo Young-joo, Golden Rainbow) falls to his death and fellow classmate Bae Joon-young (Seo Ji-hoon, Legendary Shuttle) discovers his body buried in the snow. The unexpected death sends shock waves throughout the school, but when the students ask why he died, school officials don’t provide any answers. This spurs the students to take it upon themselves to uncover the truth about their classmate’s mysterious death and leading the endeavor is model student Go Seo-yeon (Kim Hyun-soo, Joseon Gunman). She receives an anonymous letter about So-woo’s death, and it becomes clear that there’s far more to the tragic case than the adults are letting on.

The teaser opens with So-woo’s chilling death, the inciting incident. His body is found underneath the snow, and sound bites reveal various students’ sentiments: “It wasn’t a suicide. I saw it.” “There is a criminal among us.” Seo-yeon wonders why she was the recipient of the anonymous letter, and her father instructs her not to do anything. The school’s legal counsel Han Kyung-moon (Jo Jae-hyun, Master-God of Noodle) wants to keep everything under wraps and calmly advises, “Prepare the countermeasure manual.” Seo-yeon says that the trial isn’t something the students are doing for fun. “We [the students] can do it, too. Why he died? We can unveil that ourselves,” she asserts. Flashes of other students affected by the ordeal are shown: Han Ji-hoon (Jang Dong-yoon), Lee Joo-ri (Shin Sae-hwi, Sweet Stranger and Me), Park Cho-rong (Seo Shin-ae, W – Two Worlds), and Choi Woo-hyuk (Baek Cheol-min, Kill Me, Heal Me).

That one line from Jo Jae-hyun sent a shiver down my spine, so I imagine any more than that and I’ll be properly shaking with either rage or fear. With the fresh-faced cast, compelling premise, and dark subject matter, this is one drama I’ll definitely be tuning in to.

Solomon’s Perjury will premiere on December 9 on Fridays and Saturdays after the end of This Week, My Wife Will Have an Affair.

MY BODY IS READY.

MY HEART IS READY.

MY MIND IS READY

MY SOUL IS READY

MY LAPTOP IS READY

First thing that comes to mind looking at the poster:

the winter is coming.

I'm inviting myself to this prayer circle too please. Let me know if it requires any pentagram drawings or blood offerings to be successful.

Yeah, please be as good, or if it's possible, even be better.

That's cool and all... Patiently waiting on a Goblin post to squeal and gush to my heart content ??

Thank you so much for the article and explaining more about the teaser, chickachunga . Thank you to all the articles in Dramabeans about Solomon's Perjury. I think, no doubt to you getting attention to this drama, I am glad to report that Viki now licensed this drama. Hooray!
Lets make sure to visit the channel and thank them.
https://www.viki.com/tv/33359c-solomons-perjury

Trying(and failing) to temper my excitement for this. I'm curious about jang dong yoon, as i haven't seen him in anything yet(liked what i saw of seo ji hoon in legendary shuttle), and I really like the other cast members.

Nice to finally see more characters from the original in the trailer (although in a blink and you'll miss it fashion). It seems the kid who initially discovers the body is given a much more fleshed out characte here, he didn't have much to do in the original as far as I can remember. Interesting.

Seo shin ae was in W? Who did she play?

Lee Jong-suk's little sister. She died right away at eps 1 tho :'

Lesson learned to all SK actors: Don't accept role as LJS' immediate family.
They all deceased by ep 1.
^^

Everything about this screams White Christmas.

Agreed, so while I'm excited for this I'm also slightly wary of the plot. White Christmas was mind blowing and got me loving all the characters, but if this is a mirror of the storyline (not that it's plagiarism ofcourse, I trust the writers and author that it's probably coincidental they had the same ideas and concepts in mind) then I might find myself comparing everything and everyone which is not a good thing imo. Fingers crossed.

I honestly didn't get any White Christmas vibes while watching the original, although it will remain to be seen how the production team will handle the tone and tweak the story for the drama. And while it's easy to see how the comparisons to White Christmas are drawn from reading the plot description alone, I do hope the constant parallels to WC won't set up certain expectations in viewers' minds that might not be met. Going by all the comments so far a lot of people are already getting prepared for "another White Christmas". I just hope it will be judged as its own entity. I guess people are really itching for another drama like that, I am too actually, it was truly such a gem.

In White Christmas, I fell in love with KSK... well, and those fab boys too. I know I'll wowed and fall under JJH charm in this drama as he always did in any of his dramas. I'm so ready for this senior actor and the students.