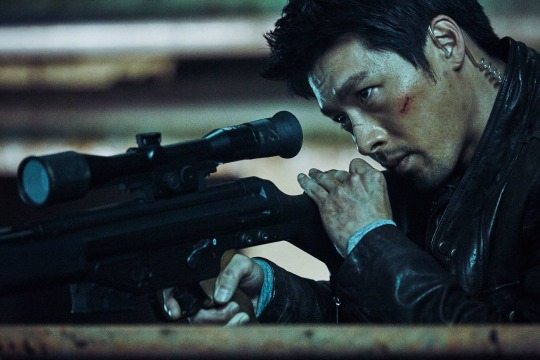 Anticipation is high for upcoming action flick Alliance starring dramaland favorite Hyun Bin (Hyde, Jekyll, Me) and Chungmuro’s comedic ace Yoo Hae-jin (Luck-Key). With these two carrying the movie, it seems there’ll be sufficient cause for swooning and/or laughter amidst heart-stopping action, if all goes well. Kim Sung-hoon (My Little Hero) directs and Yoon Jae-kyun (Ode to My Father) produces.

In Alliance, Hyun Bin plays a North Korean detective named Lim Cheol-ryung, and Yoo Hae-jin plays a South Korean detective named Kang Jin-tae. The two unite in an unlikely partnership as part of the very first North-South joint crime investigation unit in order to crack down on a case involving a North Korean crime syndicate that has infiltrated South Korea. Although the two operate as one team, both men have vastly different objectives. For Hyun Bin, this is a high-stakes, life or death mission that he must complete if he wants to live another day. Yoo Hae-jin, however, is tasked with thwarting his North Korean counterpart’s mission. One team, two different aims, and we get more chaos than cooperation.

Within a day of the teaser’s release, it became the number one ranked movie clip on Naver, generating over 500,000 hits so far, and gaining a lot of attention for the movie. The teaser introduces us to Hyun Bin as the stoic and elite North Korean detective who fearlessly leaps off of highways and dangles out of speeding cars. And then there’s Yoo Hae-jin as the bumbling South Korean detective with whom Hyun Bin has to work, but it’s clear they’re not the most compatible match, their political allegiances notwithstanding; if Hyun Bin is Mission: Impossible’s Ethan Hunt, Yoo Hae-jin is more Johnny English.

I think the final shot of the teaser sums up their contradictory relationship quite well: Hyun Bin and Yoo Hae-jin find themselves restrained by the same handcuffs and way too close for comfort. They’re stuck in a car seat wedged on top of each other, and Hyun Bin can only sigh at Yoo Hae-jin, whose face is mere inches apart from his. Forced proximity of two polar opposites? Sounds like a recipe for bromance and hilarity.

Alliance will premiere sometime in January of 2017. 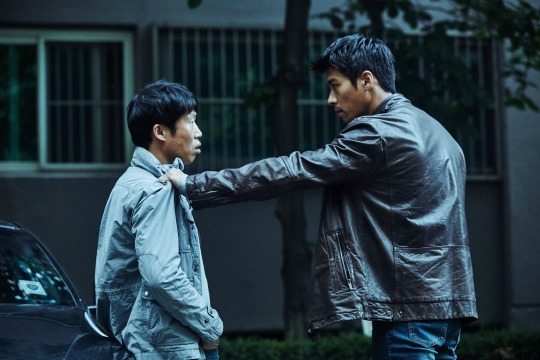 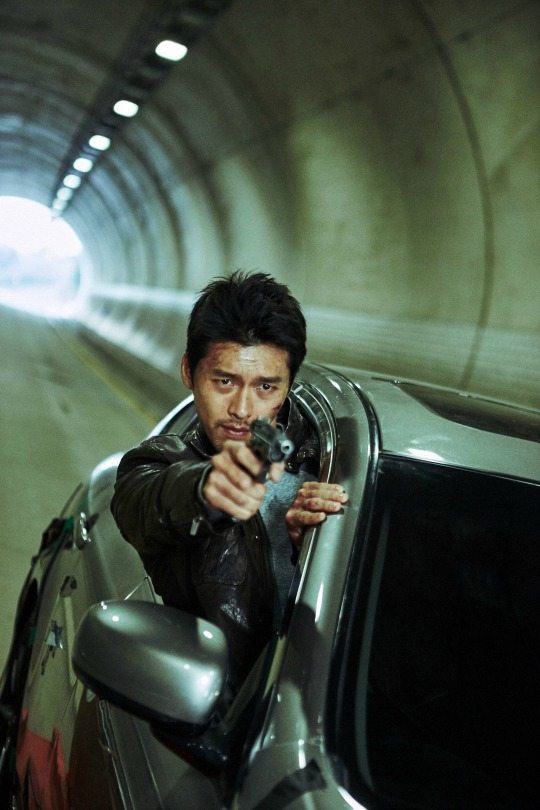 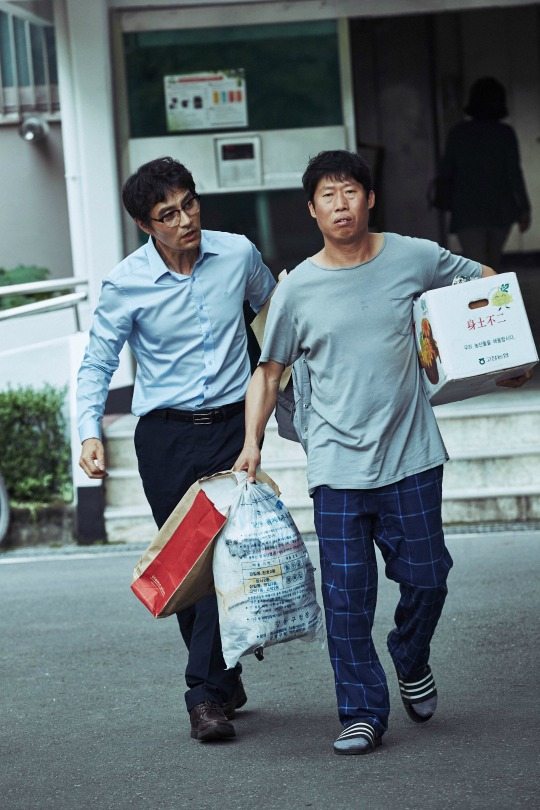 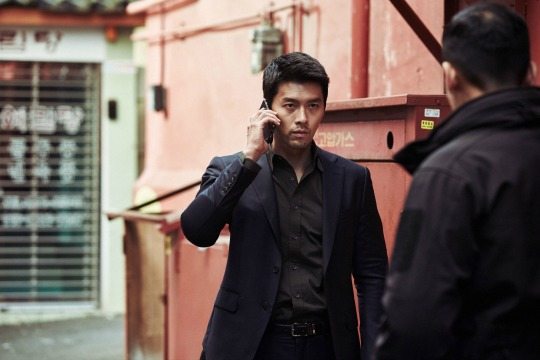 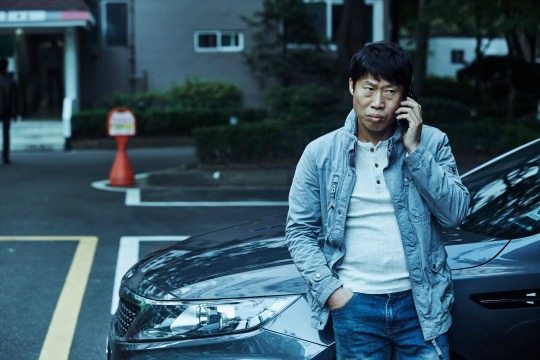 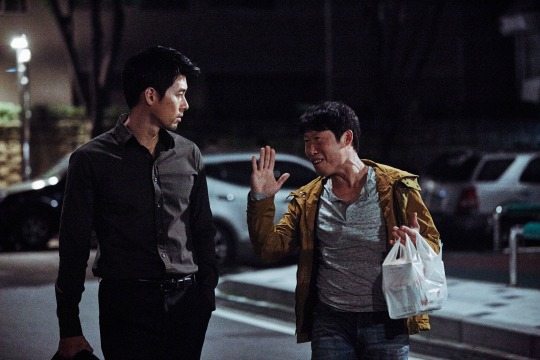 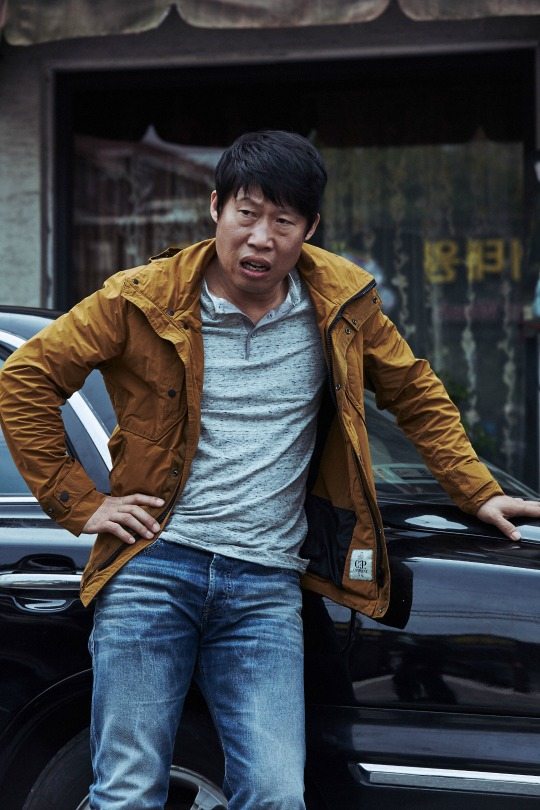 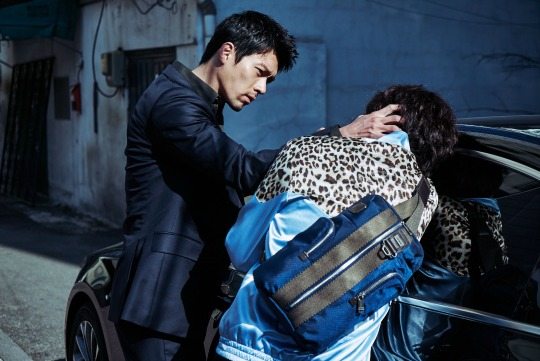 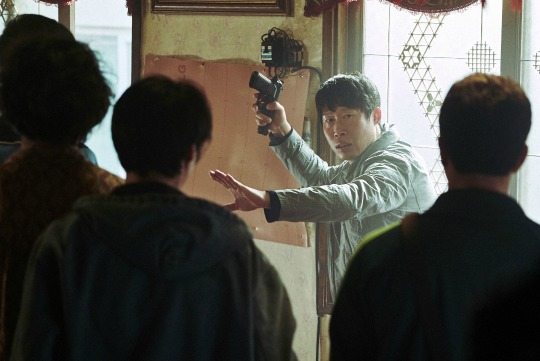 Wow, looks like HB is going all out, putting his life on the line in order to erase the shame from HydeJ&M.

What's with the shape of his face? Has it always been this angular or triangular? I watched Secret Garden many times, but didn't notice it then. It's been said that K celebrities are into shaving their jaw bones to make their faces smaller & sharper. That must hurt.....

He has been asked to lose lot of weight for that particular role, actually. Funny enough, similar loss weight asked for SeGa. He has more meat on when he has no projects.

his face shape has been like that since secret garden.

i was pretty shocked by his face in secret garden. i'd previously seen him in worlds within, a drama i love and have rewatched too many times to count. i was used to his look there, and then seeing him in secret garden was positively jarring.

it's my opinion that he just lost a ton of weight and got very, very lean for secret garden, and has been like that ever since. you can sort of see his facial shape in samsoon and worlds within, and i don't think he shaved anything down. i always thought he was quite fit/lean to begin with. i don't know about body, but face wise i liked his look in worlds within a whole lot better.

I just want to say I also love that drama. It is actually the only Hyun Bin drama I have liked. So thanks for the shoutout

eek i love worlds within. never grows old. i think some people found it boring or dull or whatever, but i absolutely loved it beginning to end. there were so many belly-holding laugh-out-loud moments. it was one of hyun bin's best performances.

but then he went and did secret garden where i loathed his character, and my love for him dwindled after that.

I'm thinking (hoping?) Binnie would be less likely to get plastic surgery because he's well known for being born amazingly handsome.
My question is, how on earth does somebody look so cool ALL of the time?

In the Snow Queen, he has a very square jaw and in Secret Garden it is very angular, so I think he shaved it. You can see the same change in Jonghyun from Shinee. They looked good either way so I guess it was just what they liked better.

Hyunbin looks sooo sooo thiiiin! ?
But he still looks hot on different angles tho. Hehe. Can't wait for this movie! ?

WOW! I could barely recognize Hyun Bin in the first photo. I have never seem him look so tough and manly before.

In some angles from the other photos, he reminded me a bit of Jang Hyuk. Especially that mustache.... xD

The movie teaser looks cool too. :)

Wow indeed! Never seen him so hot and handsome! The facial hair suits him fine...more manly!

And I LOVE that last scene!

I must be in the minority who thought Hyde, Jekyll, Me was ok... not great, but still watchable.

I actually really enjoyed it, not just thought it was OK, but really liked it. So maybe I'm in the minority? That or I didn't jump on the hate bandwagon so I thought the characters in the two split personalities was quite good. I even cried like a baby when Robin left/died.

Yoo Hae Jin! Yoo Hae Jin! I'm so excited for how hilarious I know he will be in this role. And I'm confident Hyun Bin will play well off of him as the straight man, especially given that last shot in the teaser.

LOL at the last screencap ! :D

I haven't seen Hyun Bin on my screen for such a looong time ! Looking forward to this !

Hae Jin Ahhhhhhh! My actor crush #3. Excited for this movie. I hope it does well.

I thought he can only look cute, serious and a bit macho. But rough and tough and so manly? With a beard?

Glad one of my fav actors will come back with a bang! <3

I LEGITIMATELY TRIED GOOGLING ANOTHER ACTOR WITH THE NAME HYUN BIN. (O_O)

As startling as the difference is though, I am not complaining AT ALL. I mean wow. Just wow.

One of my friends always did say that men hit their peak of physical attractiveness after 30, and I feel like I never quite got what she meant until this moment... *fans self*

How can anyone be so handsome? He's one of the few actors who is manly and masculine, a real handsome MAN, not a pretty boy.

Looks great!! Hope it erases that atrocity that is Hyde Jekyll, Me. That was a HUGE misstep he took.

oh man i just realized how i miss Hyun Bin on my screen.. guess gotta wait for a while before he decides to come back to dramaland ;_;

MY BINNIE! I have missed him so much after that terrible drama he did last year. Glad to see him in a different avatar in a new movie. He just looks so damn good and manly. Loving the roughed up look. Wish to see him in more movies and dramas in future. One of the finest and manly actors in korea.

I don't hear any good things about NoKor but if Hyun Bin becomes a member of the hermit kingdom then I'll definitely go!

Lol I laughed way too much at the last scene of the teaser. Wonder how they end up with that position HAHAHAHAHA

I thought the facial hair does not suit Hyunbin at all but I must be the minor. I am looking forward to this!

Beside Kim Samsoon I've never liked any of his dramas. Although he is not as a well known in Chungmuro, he is one of drama actors who I think could successfully make a movie career if he stays there.

I'd watch him on the big screen. He'd working with talented people who can utilize his talents which I didn't think he has. He did well in his last movie despite not having any sageuk experience before.

I'm not sure about this director. He still green. I wish he had a solid movie actress co-star for this.

Hyun Bin is as hot as always. Sigh

He looks so different! He looks a lot like Jang Hyuk here. And that is a compliment!

Well this kinda reminded me of Ajusshi.... Hopefully Ajusshi 2?

Hyun Bin in this reminds me of Ward from Agents of Shield?

Binnie has never looked this hot and manly!!

Hyun Bin! Missing this dude so much though but he is a good artist :). So I know he will always comeback.