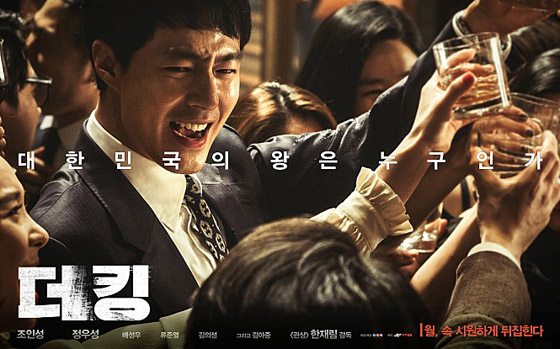 It has been way too long since I’ve seen Jo In-sung. Even though he made a delightful cameo appearance in Dear My Friends at the beginning of this year, I just can’t get enough of him. Thankfully, his movie The King will be released just next month in January.

For the upcoming film, Jo In-sung plays Park Tae-soo, a lowly prosecutor who dreams of infinite wealth and power. Jung Woo-sung (Asura) plays Han Kang-shik, a soaring star in the political realm who is the number one candidate for Chief Attorney-General. When Tae-soo meets Han Kang-shik, he realizes that his dreams are within his grasp if he can just grab onto this man’s coattails.

The King tells the story of how rising political mastermind Han Kang-shik and his power-hungry follower Park Tae-soo scheme and manipulate to become the ultimate kings of their world. Ryu Joon-yeol (Lucky Romance) plays Tae-soo’s gangster-friend bestie, and Kim Ah-joong (Wanted) his wife. The one person next to Han Kang-shik is his right-hand man, played by Bae Sung-woo (My Sassy Girl 2).

The trailer gives off a caper film-vibe, which I’m really digging. It starts off with Han Kang-shik’s voiceover to Tae-soo:

Can’t you see it?
I am history.
I am this country.

Seeing how Han Kang-shik’s climb to power so closely resembles that of the most illustrious figures in Korean history, Tae-soo decides that following him will be the fastest way to the pivotal center of monumental power.

Then the scene shifts to a lifestyle of successful decadence and glorified violence, with Tae-soo seeming to enjoy every single moment. A female voice asks in the background, “Links to gangs, negligent investigations, and media coercion — have there ever been such trash politicians in Korea?” Almost in reply, Tae-soo narrates, “I wanted to become King.”

The ending clip of the ludicrous shaman ceremony and the trailer music suggests that there will be some funny moments in the movie. Since it’s coming from Han Jae-rim, the director of The Face Reader, who managed to convey both emotional depth and farcical humor in his sageuk film, I won’t be surprised if the comedic delivery is top-notch.

Political action film The King will premiere in January 2017. 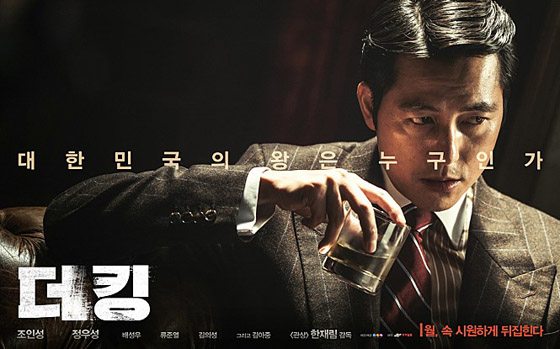 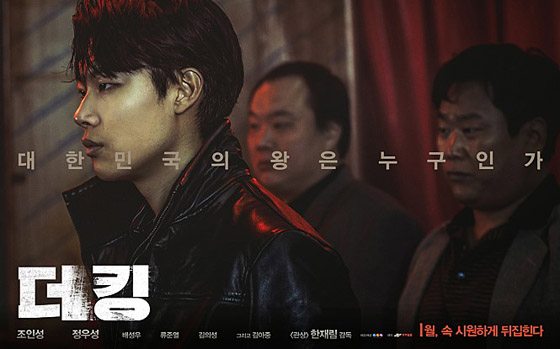 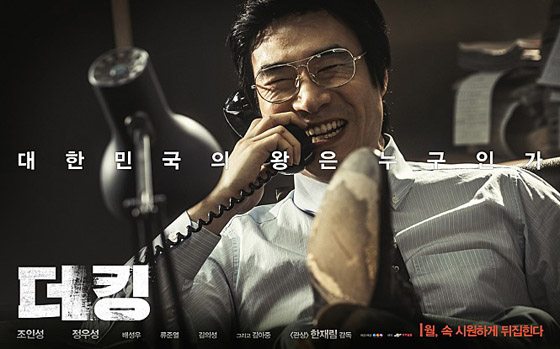 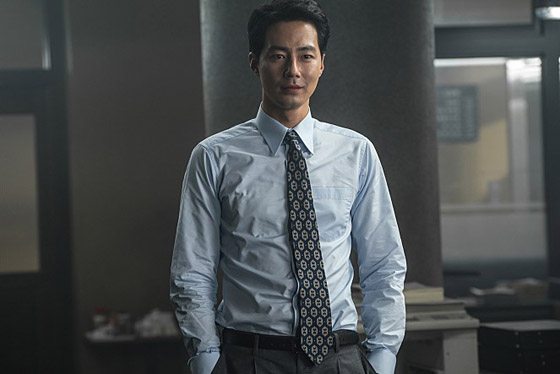 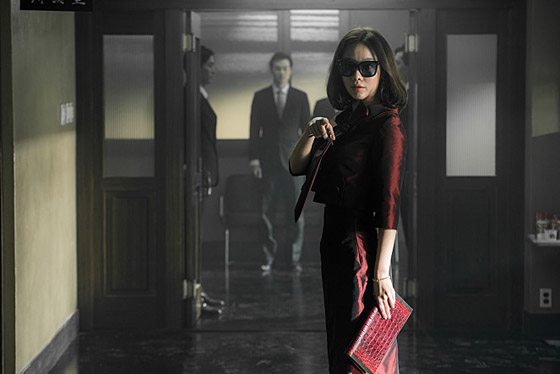 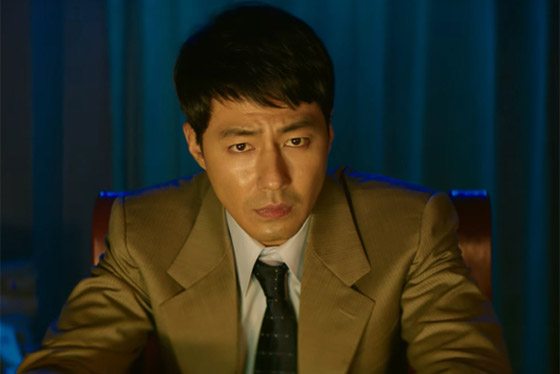 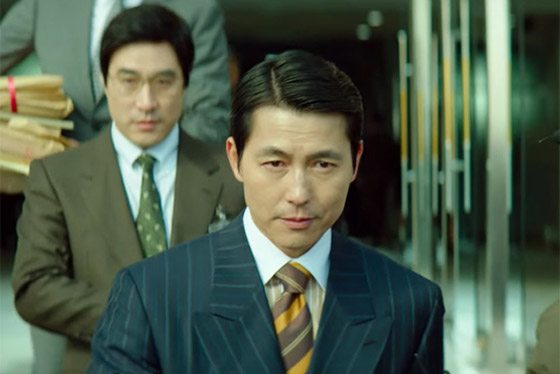 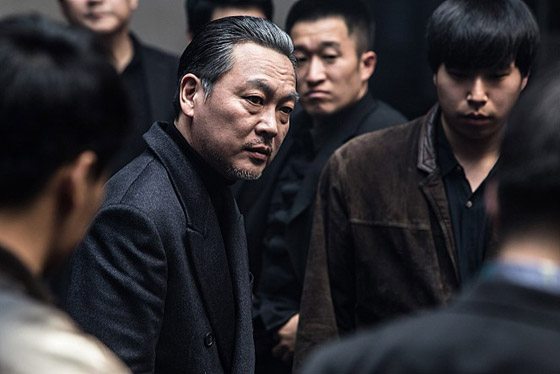 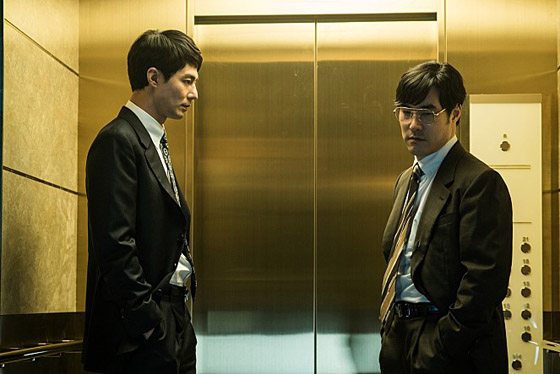 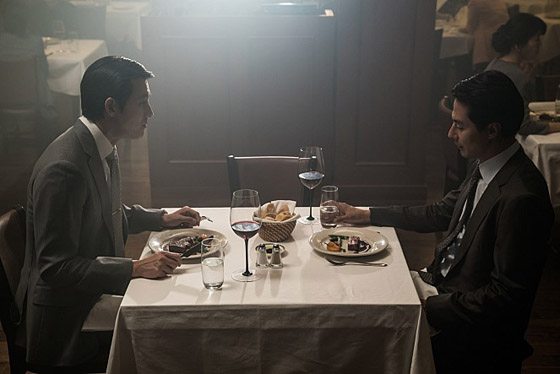 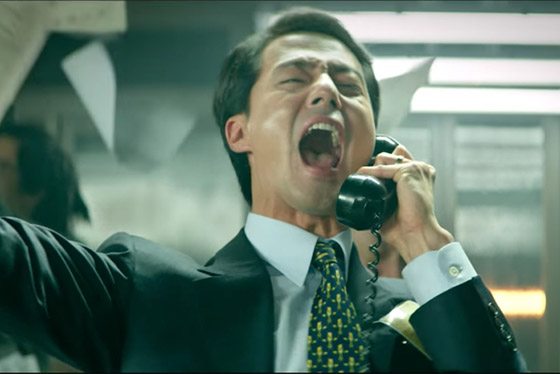 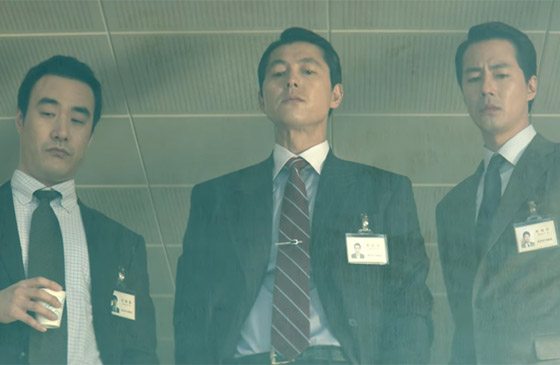 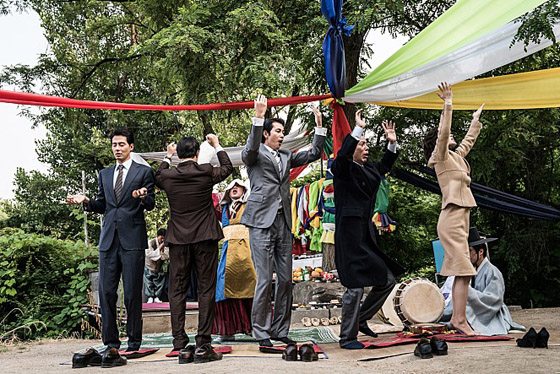 JIS, JWS, RJY, KAJ and the dad from W too! The trailer looks so good that I wish this was a drama so I can watch it...

Can't wait to see RJY in this! I wanna see him play a really different, darker character than the usual. I'm curious as to how varied his acting chops can be cos he's so charismatic onscreen ♥

Plus one can never go wrong with JIS ♥

The cast is fantastic and Ryu Joon yeol looks amazing in those pics(there is one more with Jo In Sung where RJY shows a tattoo arm)...Quite excited for this one!

I'm definitely a huge fan of Jo In Sung.

As a straight male, I'm not ashamed to say I have a mancrush on this guy. He's cooler than cool haha.

His performance as Oh Soo in 2013's That Winter, The Wind Blows still ranks as my favorite male lead in a melodrama, neck and neck with my other favorite, Yoon Kye Sang as Jung Se Ro in 2014's Beyond the Clouds (My answer as to my favorite depends on the day lol).

He's got that charming, devil-may-care confidence down to an art. He's also able to really take hold of any scene he's in, with gravitas perhaps unexpected of someone of his aesthetic. His handsome, leading man looks certainly add to his appeal.

I will be excited to see him in this. Hopefully he'll make it back to dramaland soon. Preferable in a melo.

I could not agree more! When he's in his element, the nuances in his acting, and most especially every micro movement of his face just conveys so much, I love it! Its so great that the later dramas he's made had the great directorial style of tastefully zooming in on the actors' faces so we could see Jo In Sung's capability in full glory

I've missed Jo In Sung on screen so much, totally forgot about this film if I hadn't seen this news article.

It's interesting how we have The Masters film coming up and now The King will be showing in January both focusing on politics. There's currently alot of political unrest within SK and the timing of these films are just perfect.

I am getting a bit of a 'The Wolf of Wall Street' vibe.

The awkward moment when you get JWS and JIS mixed up... I mean even their names sound alike! -_-

Actually, to be quite honest... I never realize they were two different people until now........ o.o

I used to get them mixed up too :p

i don't get them mixed up bacause i was introduced to them one at a time and why crush on one gorgeous man when there are two of them to love!

So much pretty and talent in one movie! Jung Woo Sung is seriously gorgeous, calling him handsome just doesn't cut it. Wasn't expecting the shaman bit. That was gold.

Reminds me of Robert Penn Warren's All the King's Men.

This is the first thing I read upon waking up (still on my bed, with eye boogers too heh). The cast line-up is too good to be true. I'm not dreaming, am I?

If there're such politicians who were as gorgeous as them, I would religiously follow the politic news and debates which I'd normally consider boring comedic acts.

I wonder if the shaman ritual in the trailer was to alluding Park Geun-Hye and her beliefs to shamanism.

There are indeed handsome politicians all over the world. Maybe not as gorgeous as Jo In Sung or Jung Woo Sung but worth to look at. Like Canada PM Justin Trudeau, Mexico President Enrique Nieto, even George Osborne from UK is quite handsome. In my country there are several handsome politicians too. Yeah even though their personalities maybe not that handsome.

There's just something about jo in sung

I need him to play hamlet

Wow @Emanresu, I haven't seen Jo In Sung in anything but I'm hyped by your man-crush! Love

That man makes me forget to read subtitles when I'm watching him so I have to keep on rewinding. I'm not complaining though.

Hopefully I haven't hyped him *too much*.

You'll probably watch and wonder what that crazy douche on DB was pontificating on about. Curse me silently for setting up such disappointment.

Just as @Archer said above, how I wish this is a drama instead of a movie...

Subbed or not I know I will watch this.

Btw I really want him in a drama again ...

I'm hella excited for this one, tho we international fans would need to wait for at least a month to watch the subbed one ?. The release of the movie is so in time with what is happening in Korea right now..
By the way,as of yesterday..the trailer views on Naver already reached 7M (Heol ?)..and it broke the record of most viewed movie trailer in korean film history ???

The director was also the director of The Face Reader and that movie is great.

Can't wait to see this..JIS and JWS. There will be no question needed for these hot ahjussis.
Also the gangster guy..lol he's too hot. So I tried to search him and found out that he just debuted last year. Can I say..he's climbing up on my crushes list? Hahahaha

If you guys haven't heard, the US release date for "The King" is January 27th! I'm stoked!

Am I the only one screaming when Ryu Jun Yeol came up with tattoo on one hand and a leather jacket? haha. all of them are daddies rn i just cant! >,<