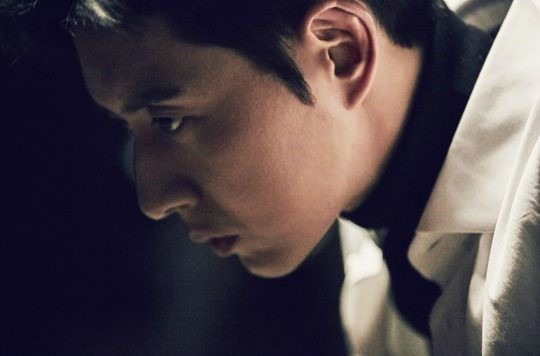 More stills have been released for JTBC’s upcoming action-thriller-melo drama Man to Man featuring lead Park Hae-jin (Cheese in the Trap) in character, along with behind-the-scenes glimpses of the actor glued to his script. I don’t know why he’s chained up and locked in a cell, but these stills look a lot more thrilling than I’d expected, and not in a bad way.

Man to Man is a 100 percent pre-produced drama written by Kim Won-seok (Descended From the Sun) and directed by PD Lee Chang-min (Remember–Son’s War). The story revolves around Park Hae-jin as a secret agent undercover as a bodyguard to a top Hallyu star played by Park Sung-woong (Remember–Son’s War). Kim Min-jung (Master of Trade–Inn 2015) plays the sunny manager and president of the actor’s fan club, who grows suspicious of the mysterious bodyguard protecting her beloved star.

In addition to the torture/interrogation scene, there are a couple of shots from Park’s Weibo account, which are from the location shooting in Hungary; he is pictured in a supermarket, looking low-key as he shops. The show has promised a grand-scale teaser to be released on December 29 via Naver’s V. DRAMA channel, which will consist of exclusive behind-the-scenes footage, cast and crew interviews, and bloopers. There will also be a segment called “The Man Reading ‘Man to Man,’” which will address questions about the drama, facilitating communication between curious viewers and the creatives behind the show.

Man to Man will premiere on JTBC in the first half of 2017. 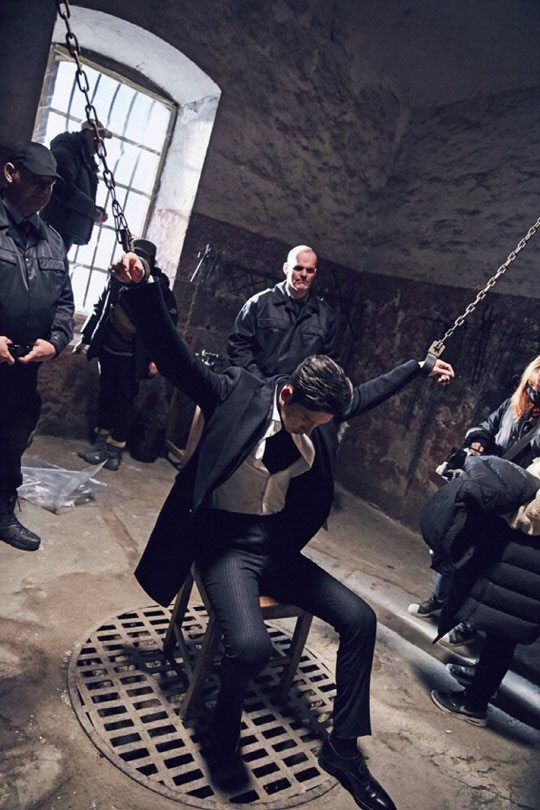 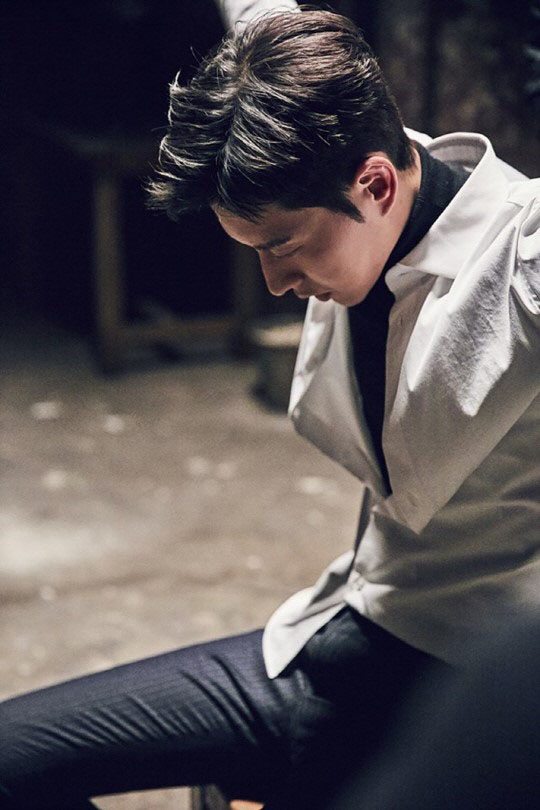 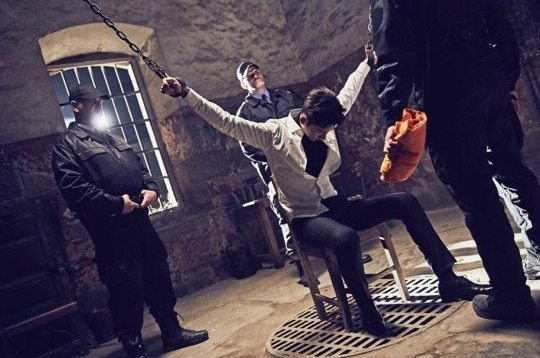 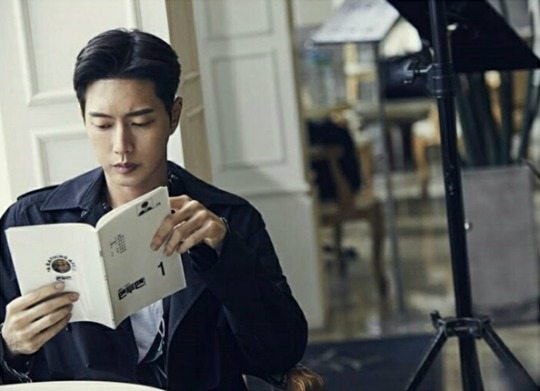 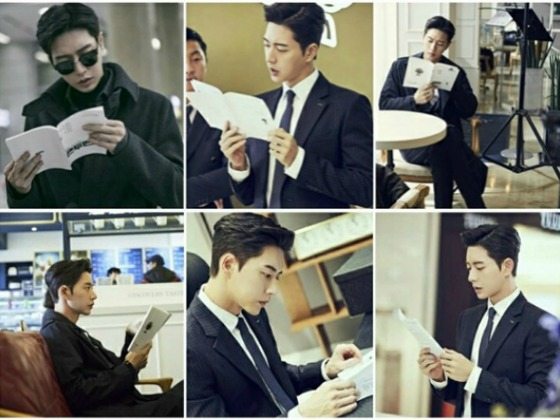 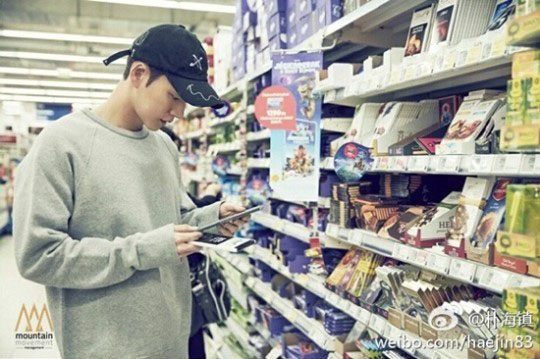 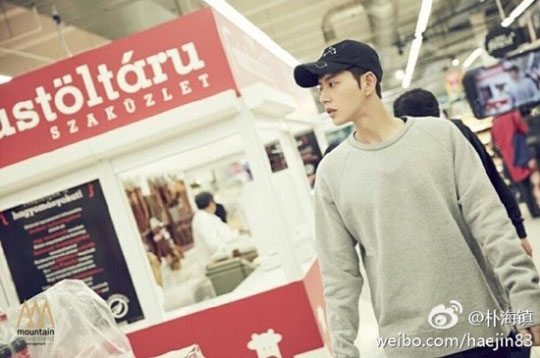 Because Park Hae-jin is my biggest K-drama love, I just have to say -- I hope to dear god this show is excellent!

I'm excited! I hope so too!

Yeah me too, he's my biggest K-drama love ever and I cannot wait for this show to start. Fingers and toes crossed for it to be good!

Awesome! by the way, pre produced? as far as I know Korea do that for Chinese broadcast, it means it will air in China? cuz I seriously want that stuff of the ban to stop!

Even when chained up his hair looks perfectly styled.

Lol .they have to look good at ALL times you know ;)

That is just the curse of being Park Hae-jin.

I wonder if they open the chains first to take off his jacket.

HAHAHAHAHA. I would have never noticed if you hadn't pointed it out. I'm dying. ???

I'm really curious about the mode of promo for this drama. So many BTS shots and teeny tiny snippets of story related stills. Is there not enough story for at least a proper teaser or are they saving the best for last? I hope against all odds that its the latter. Oh Lord let this be good, may it not go the way of K2 or Goodbye, Mr Black!

Thank you for the photos and article, chickachunga.
I am shocked that Viki still does not have a fan channel for this drama, and DramaFever does not show signs of licensing it either...!

Dramafever just posted an article. They will air this drama

Maybe DF will have its Roku app working by the time this show airs ?

this looks thriling indeed!! I'm really excited and hope the drama delivers as it's showing so far!! :D

The pictures of Park Hae jin in black tie and gelled hair is from the Lotte drama special Seven First Kisses- i just saw his episode yesterday. So thats not from Man to Man. He was intense even as the boss in that romcom special. Looking forward to his new drama

But the script he's reading on those pics is Man to Man's script. You can see the title written on the cover. Maybe he just wore the same suit.

First picture is apt for a magazine spread tho. Those perfect hair and perfectly fit suit~
I actually prefer if they didnt release pics and bts right now cause first half is when exactly? The waiting.. patience is not my virtue guys, so dont do this to me~

Was I the only one doing a double take on the second picture? Just me then. Okay. My what tight...... pants you wear!

I scrolled back up to look. Jaysus!!!! Lol

Theatre was the first thing I noticed. That's some legs he got.

I was trying to be such a good girl, but now!

Late to the party, but that was not the outline of his wood ^^ just the zipper of his pants bending and making it look like he was about to... youknowwhat ^^;

But darn it he got some magnificent legs going on there.

Omg, I'm soo in love with him after CITT that I stalk/search all info about him on the net..
And i, never for a minute, believe that stupid 'host' scandal of his..not my yoo jung sunbae!!

Please, pd-nim and writer-nim, be good to my precious hae jin...

.....his clothes, his hair looking fine while being tortured. With some dirty-ish manly looking face. Now that's we called details. A pre produced at that.

He looks super skinny to me...please put some kg back.

I've been excited about this drama from when it was first mentioned and these stills got me really thrilled!

He looks more like a beautiful masochist who chooses to sleep that way than someone being tortured ?

Did anybody else get "Love Me If You Dare" flashbacks from him all chained up like that? Such a great show, I hope this one's good too!

I thought so too!! In fact that was my first thought when I saw that picture. Hope this show is good.

THANK YOU!!
I saw the picture and Read "IN CHAINs" and thought: Are they remaking LOVE ME IF YOU DARE as a KDRAMA??

I mean, I guess i'd trn in for that too ..but I'd be hard to top Wallace Huo

No, they're talking about the Chinese drama Love Me If You Dare. Mirae's Choice was also known as Marry Him If You Dare.

I wonder how in the first pic he wore suit, and the next he didn't? How did they take off the suit? By ripping it off?? O__O

Anyway, excited for this drama! I need me some action!

I know right? Quite details there to be missed. Maybe they used scissor..To me if they really want to torture him, they should at least take off his whole clothes, I mean with how sadistic the evilish smile guy behind him look, the pd should've thought deeper. Don't they have guantanamo as reference?

Some of the pics are BTS. When Haejin wears the coat, you can recognize the staffs standing in the corner of the picture too.

How can he look so perfect while shopping?

I love his oversized sweater and its in my favourite colour, grey. I just want to snuggle up with him.

What a manly face. And yes, he is handsome.
Hmmm such a sweet treat to my eyes.

17 Playstore, Okay Or Not Okay

I can bet my saved up money on this that they'll air it on April when I'll be giving my high school public exams. RIP to me if that really happens.

A hot man chained up? Yes, I will definitely be watching this drama.

The headline drew me in :p

I doubt he'll be chained up for long that's why the hair needs to be in perfect shape for when he makes his exit.

Probably doing a Black Widow on his captors.

Can't wait to see oppaa in his new handsome avatar... Hope to see you soooooon...