Smiling along with Tomorrow With You 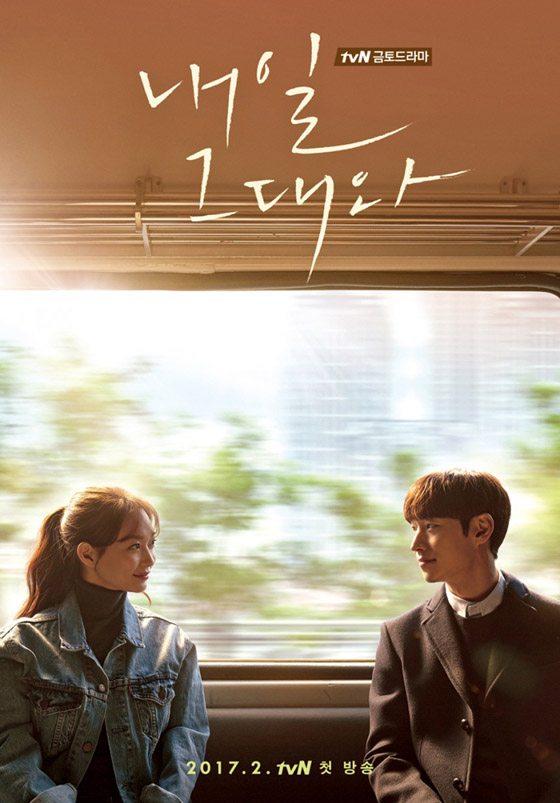 It’s only one poster, but we’ve been so deprived of updates from tvN’s upcoming time-traveling-romance-fantasy drama Tomorrow With You that this one simple poster is pretty effective at revving up my dormant excitement over the show. It’s Lee Je-hoon (Signal) and Shin Mina (Oh My Venus), transcending time be in love with each other! There’s no way I’m not watching this.

The poster features the leads sitting side by side on the subway, casting sweet looks at each other. Tomorrow With You stars Lee Je-hoon as the time-traveling Yoo So-joon, he of the perfect looks and talent and personality, and tells the story of his unpredictable romance that unfolds with Shin Mina’s character, the lively and endlessly positive Song Ma-rin. The couple marries three months after their meeting, and their romance is described as both sweet and savage, which certainly piques my curiosity.

Coming from PD Yoo Je-won of laugh-a-minute comedies Oh My Ghostess and High School King of Savvy, I think we can expect some zaniness and zippy humor. And with these two actors, I’m also crossing my fingers for mad romantic chemistry, because it seems like the kind of show that could live or die by chemistry. (Let’s think positive and anticipate living.)

Writing is Heo Sung-hye, whose most recent drama is the melodrama Full Sun, although she did also write the 2012 rom-com film All About My Wife. Tomorrow With You will be tvN’s next Friday-Saturday drama, following The Lonely Shining Goblin; basically, tvN wants to rule our weekends now and forevermore. The drama premieres in February 2017.

I'm dying for an actual trailer.

So pretty... really pretty..
It's rare to get 2 talented leads starring in a drama that I care about!
Show, I hope you won't disappoint me!

Yeah! And it's 100% pre-produced so they have all the time to make this drama better. I can't wait for February to come.

Or, as in the case of SOME dramas, all the time to make it worse. Not mentioning any names, but Scarlet Heart

Or Uncontrollably Fond and Entourage

the poster is so so good

I love the simplicity of the poster. I hope this will be good. I don't want to be disappointed anymore. Huhu.

The poster is so pretty... It looks like a movie poster~

Still sad that Lee Min-ki was replaced. Looking forward to this drama still. Hopefully it can deliver!!!

Is it gonna have the same plot as time traveler's wife?

I really looking forward to this. LJH was great in signal, and I am hoping that this drama will make him to be a even bigger star in the future. He's a great actor.

Amen! He deserves much more love.

I'm so excited for this one but I don't want Goblin to end :'( Is there anyway they can....co-exist ghahahaha

Me too!! I'm not ready to let go of Gong Yoo yet (though there's still 2 more months to go)

Mte. The thought of this show taking Goblin's place and Goblin ending makes me wanna cry mermaid pearl tears! But since I can't do that, I'll just continue to enjoy and appreciate Gobs while it lasts.

I wonder if the story will be the same.

This Instagram account I follow sometimes drives me nuts because they lift posts and language directly from dramabeans (without credit). I was browsing my feed and I saw a post that sounded so much like dramabeans authors, I was like "I am 100% sure DB just posted an article on tomorrow with you"

lol that's both annoying to hear (the first part) and amusing (the latter). (Also, I don't get the lifting content thing. Why can't people just write their own content?? Like it's hard? Okay, yes it's hard. That's why you steal it. But come on, have some shame!)

And it's like... Dramabeans is one of the biggest sites out there for drama fans. They think no one will notice???

Wonder if you make a (lot of) typo in a writing, would they copy them plainly like that w/o proofreading?

Well. You know you're famous when someone tries to copy you in some way, shape, or form.

I agree...i've seen two big bloggers directly copying my original posts. it makes me extremely mad and i would always vent my frustration to my sister. Just because I'm small doesn't mean you can blatantly steal my hard work.

I like that it says "BE ORIGINAL" in their bio lol

I came across it too.. I was so frustrated I just unfollowed next second... JB must be zillion times more frustrated

Give CREDIT to DB for Christ's sake..

Same thing happened to me in a different way. I gave a painting as a gift to someone but when our friendship went on the rocky side, that person posted my painting online claiming it as her work and even cropped my signature at the bottom right part...T.T

I'm going to watch this definitely but 40% of me still can't get over Lee Min Kin have to drop this drama.

Just think about his scandal and that regret will quickly vanish...lol

I am really looking forward to this! Yay for a fantasy-tinged drama following Goblin! I have actually been loving all the fantasy elements in Dramaland recently as a self-proclaimed fantasy lover.

Still sad about Lee Min-ki not being the lead, though. Not that Lee Je-hoon isn't great! It just has been so long since LMK has been in dramaland.

Is this an adaptation/inspired from a novel with similiar name? Because my friend is reading one and I remember this as one of the upcoming drama so she told me the whole plot already :(

I love this weird combination! I hope the drama will be better than this poster haha.

look at the poster make me think, why dont they make me before you drama version?

The story has a soft place in my heart despite anyone who against it.

Even the movie couldn't live up my expectation.

Lol I may or may not have started the initial "I'm totally tearing up" squee stages when I read this post. The kind that involves the hopefully not annoying high pitched "aaaiiiiiee!"

I will watch absolutely EVERYTHING TvN produces. The only let-down was Cheese in The Trap.

And, Yes, Javabeans, are you guys ready to have a Dramabeans Instagram account and App for iPhone because I am SO ready!!!! (not that you need any more work to do...)

I really really want to watch this but I don't want Goblin to end. Dilemma... Dilemma...

I always somehow end up watching tvN's Fri Sat dramas. They just pick such good stories. I wonder what secret brew they do over there to always come up with a fresh storyline.

me too, I usually like thier Friday Saturday dramas more than Mon/Tue

Love Lee Je-hoon, but can't help but kinda wish for the Minki-Mina pairing that could have been. In their roles, they're both so quirky and endlessly charming in a similar way... so hopefully one day, we'll get to see them in something together!

Just seeing the poster on DB homepage made me excited. Can't wait for this.

They're both so darn pretty, my goodness! Can't wait to see an actual teaser/trailer w/ the characters faces and their interactions. I can see them be cute and saucy, mhm.

My heart's already racing from the teaser photo alone. I need this in my life.

Really looking forward to this :-)

Repeating what JB said, "There's no way I'm not watching this."

I've been waiting for Tomorrow With You for what seems like forever. TT

I love this poster! It looks so warm, beautiful, and simple unlike the often-seen flashy, glossy posters of K-dramas.

i am a fan of both Lee Min Ki and Lee Je Hoon, so i'm totally happy that either one of them is in this! love Shin Mina also...

looking forward to this!

So excited for this show!

Not be a spoil sport but, remember what we all said abot chemistry and plot being just a bonus for Oh My Venus? Because Shin Min Ah and So Ji Sub, ZOMG!!

And then..., well those who watched will bear witness( aside, if not for the 'b', ALITERATION! Hee hee!)
*excuses myself*

Omona~~It seems I won't be experiencing Withdrawal symptoms after Goblin since there is another drama waiting for me. Hahaha.
tvN has certainly hit the gold if this drama becomes daebak!

Will the legendary walkie talkie be making a cameo?

Forget the walkie talkie. Get Jo Jin Woong to come in!

Yes please, another dose of epic bromance from the duo wouldn't hurt!

Yay! Lee Je-hoon is one of my favorite actors. After Signal I started watching Secret door but the Sado story does not really appeal to me.

I had to chuckle at the last bit when Javabeans mentioned tvN wanting to rule our weekends. This is so the truth, I've been putting off dramawatching for a bit but I can't resist their latest shows.

41 matcha and the beer

Tvn always has something for me to watch. "There is no way I'm not watching this".
Almost all my tvn look-forward drama turn to be my fave (exc cheese in the trap which big disappoint in the end), so please let it be good

YAYYYYY after goblin this!!!! my fridays and saturdays are always gonna be happy

I am looking forward to this drama just because of the two leads.