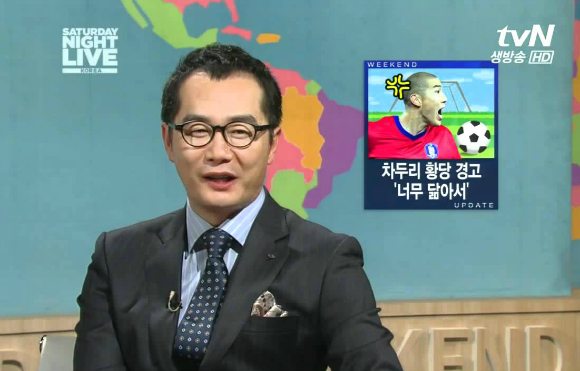 Writer-director Jang Jin (We Are Brothers, High Heel) has been a huge name in the Korean theater and movie industry since the early nineties. He has explored nearly every genre from political comedies to family melodramas, but one thing remains consistent in his record — his thoughtful presentation of human issues that challenge societal norms.

Although he works primarily behind the scenes, Director Jang can also be seen on television if you watch comedy program SNL Korea where he serves as both a cast member and creative director (and anchor of Weekend Update), JTBC’s Crime Scene, or old reruns of Korea’s Got Talent where he was a judge. Recently, he announced that he will be making his first foray into dramas by taking the helm of big-budget science-fiction drama City of Stars.

An inside source reports that Director Jang has been planning for his drama debut as a director for a long time. City of Stars is about a friendship between astronauts, which is conflicted by differing patriotic loyalties, and there may also be a romantic subplot. Rumors say that certain top stars are eyeing the project because it’s shaping up to become the next blockbuster drama and also because of Director Jang, though there is no official casting news to date.

In the description for the upcoming drama, two starry-eyed boys dream of exploring space since childhood. As adults, they are selected to be potential astronaut candidates for a special mission to obtain a steady supply of Helium-3. Set in a future world where the earth’s natural fuels have almost dried up, finding this alternative energy source becomes a matter of planetary importance, and nations engage in covert battles to ensure their own survival.

As a longtime sci-fi/fantasy fan, I’m intrigued by the premise. We’ve had aliens in dramaland, and even alien-vampires, but I don’t think there has ever been a Korean show where the main topic has been interstellar travel. I wonder if Director Jang will go for a Star Wars/Star Trek-type feel or focus the international intrigue on Earth before the astronauts go on their mission. Either way, I can’t wait!

Casting for City of Stars will begin early next year, and the project is currently being shopped at major broadcasters.

Ah, Jang Jin! Guns'n'Talks, Someone Special, Welcome to Dongmakgol and Going by the Book are the most watched movies in my movie collection and they are all either directed by him or based on his theater plays.

Thanks for pointing out WELCOME TO DONGMAKGOL. It's one of my first Korean films. I loved the surrealism. Not to mention the OST by Joe Hisaishi... which introduced me to Studio Ghibli.

I'm a sci-fi fan, too, so the idea of kimchi in space sounds intriguing. Hopefully there will be no Mars Rover of Doom. ;-)

Rumors say that application's ongoing for potential meteriorites of doom...

Coronal Mass Ejection of Doom, anyone?

How could I forget? Winnebago of Doom!

Ko Chang-seok
The undercover cop at the bank

Lee Han-wi
The head of the special unit

Ooops sorry! Didn't mean to list the whole cast of "Going by the Book" lol. Hilarious! One of my favorite pick me up movie.

@Liina
Thanks to you I spent a good half of the day watching Welcome to Dongmakgol, Guns and Talks and Going by the Book. 3 wonderful movies!

man, this probably means he won't be part of crime scene 3 that is in the works :(

The crime scene 2 cast had the best chemistry :'(

But what about Crime Scene 3? ?

I'm worried if they have the budget to pull it off. Without (tons of) money, the drama will look like an absolute joke.

and if it does have a big budget it'll end up having a whole lot of PPL (see: Goblin)

I don't think that Goblin is TOO bad with the PPL. Everyone could learn to be a bit more subtle with it, though.

But no PPL will ever be as bad as what I saw in General Hospital when my mother was watching a few months ago.

Goblin PPL is good and not too much, but Yong Pal PPL so terrible.

Oh..thank you! I guess we gonna see lots and lots of Subway.

Rumors say that certain top stars are eyeing the project. ???

Mindblowing indeed it will be. They hype for that will be so surreal.

y is won bin famous? or claim to fame? in my 4 yrs of watching kdramas.. hv only heard his name but no creds..

He hasn't been acting for a while now but his movies that I've watched, I liked them all. I think he's quite good. He's more famous for his looks though.

Won Bin's last drama was in 2002 and he hasn't been active since 2010 so it makes sense if people aren't familiar with him.

I would say that his breakout would be his 2000 drama, "Autumn in My Heart" with Song Seung-heon and Song Hye-kyo. He was the 2nd lead and gained a lot of fans because of it. It was a early Hallyu hit.

He's worked with Jang Jin before in "Guns & Talks" so maybe he could be the one to get Won Bin out of his hiatus/semi-retirement.

I also read somewhere that Kang Dong-won wanted to do a drama with people from Chungmuro so maybe this could get him to return to dramas as well. He is no stranger to science fiction either (Haunters, Love for Sale).

That is if either of them are even being considered for the drama.

Just imagining both Won Bin and Kang Dongwon on screen... Plus you have a good point. Director Jang Jin likes working with the same people so you never know, he might have asked Won Bin already.

OMG, I loved his High Heel and found it really sad and tragic about a man who wants to be a woman.

Either, I anticipate for this.

Ohhhhhhhh Interesting. I like the story so far but will it work in drama format? I've enjoyed a lot of Director Jang Jin's films and I liked him in Crime Scene so I'm really excited for this. Please be on tVn or jtbc.

YESSS, GIVE ME ALL THE SCI-FI.

The concept reminds me of Uchuu Kyoudai/Space Brothers, but I'm into it! Please don't end up looking low budget ?

I'd also love to see a drama like this on JTBC!

As long as they have the budget to pull it off I'm looking forward to it! This year's dramas have actually been pretty great with their special effects and such. Mirror of the Witch, W, LOBS, and Goblin have all refrained from looking too cheesy. A proper space opera will require quite a bit more CGI, though, I imagine.

But no matter what, I am so happy with how dramaland is experimenting with more genres and such lately. Even if W seemed to get too anbitious with its concept and not end up delivering in the end, it was one of the most innovative dramas I have seen. I hope this drama can do that and more.

I'm rooting for you, City of Lights!

I think only tvn willing go to big budget, other networks are too scare to take risk

For big buget, I just think about KBS, SBS, tvN, jTBC. MBC really don't do anything with their money.

W's cgi was top notch tho

Sounds promising. If I wasn't currently boycotting SNL Korea I would be more excited about this.

He was not involved in the recent seasons hence he did not play a part in the controversy, if that helps.

I've been waiting for something like this in a drama!!
Sounds exciting. I also like Jang Jin as a director.

I don't watch many dramas each year and even less as they are airing, but for director Jang, I'll do both. And that's even considering that I find half of his movies wildly uneven.