Heh, the poster concept for this show is very literal and cute. New tvN opposites-attract rom-com Introverted Boss has released its first posters and a new set of teasers, all highlighting the vast personality difference between an extremely introverted boss and his extroverted employee. Yeon Woo-jin (Divorce Lawyer in Love) reunites with the PD-writer team behind the hysterical comedy Marriage Not Dating, and from the looks of it, they plan to bring the funny once again.

The workplace comedy stars Yeon Woo-jin as a famously mysterious CEO of a public relations company, thought by most to be cold and haughty, when in fact he just avoids social interaction at all cost because he’d rather be alone. It seems like he’ll have a myriad of social phobias rather than a simple introverted personality, but his behavior is so extreme that at one point he’ll lose what’s most important to him, and the drama is about his eventual re-entry into society and his baby steps toward change.

Park Hye-soo (Age of Youth) co-stars as his rookie employee, and naturally she has the complete opposite personality and thrives on being the center of attention. She has nefarious reasons for approaching Yeon Woo-jin though, because we’re told that she’s out for revenge. I don’t know why she’s holding a grudge, but if her idea of revenge is something petty and mild like buzzing around the boss who just wants to be alone, I’ll die laughing.

Their differences are illustrated pretty efficiently in the posters, where Yeon Woo-jin is literally trying to become part of the background, dressed in background blue and hiding behind doors, while Park Hye-soo invades his space and stands out in her bright, bold colors. The copy reads: “In a world of extroverts, an extremely introverted boss has arrived!”

In the latest teaser, each of them reacts to gossiping co-workers in opposite ways. Yeon Woo-jin overhears his employees complaining that the boss never acknowledges their greetings and doesn’t even make eye contact, swearing at him for good measure. He runs away to hide in his own office and can’t even answer coherently when the employee comes to ask if he wants coffee, and he says in voiceover: “I’m an introvert.”

Park Hye-soo overhears the same sunbaes complain about the new rookie at work, saying that she has a comeback and an opinion for everything and is always questioning their logic. Unlike her boss, she just marches right in to confront them and says, “Sunbae-nim, I’m just extroverted.” Yeon Woo-jin says in voiceover: “She is not an introvert.” Yeah, but that’s what makes it fun! 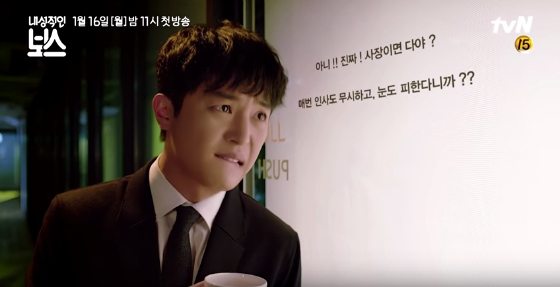 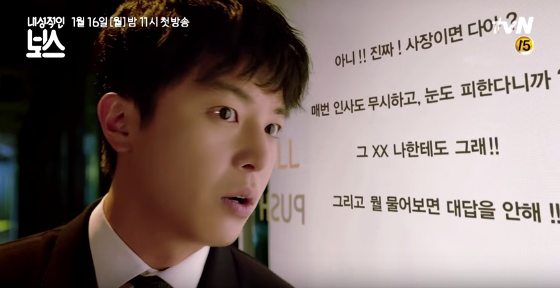 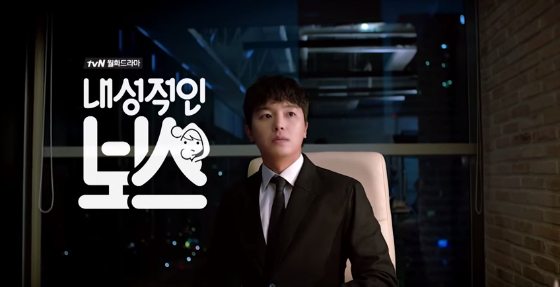 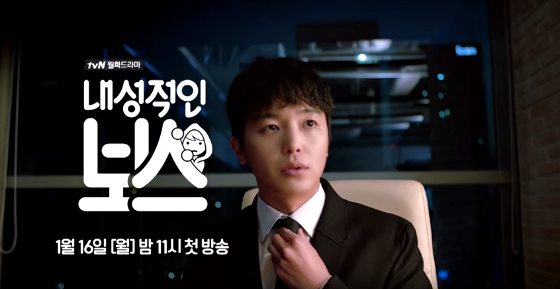 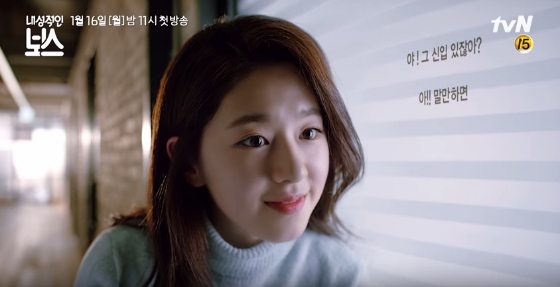 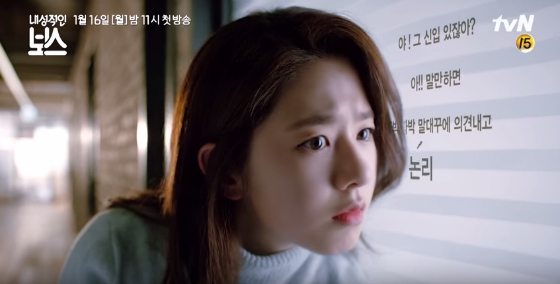 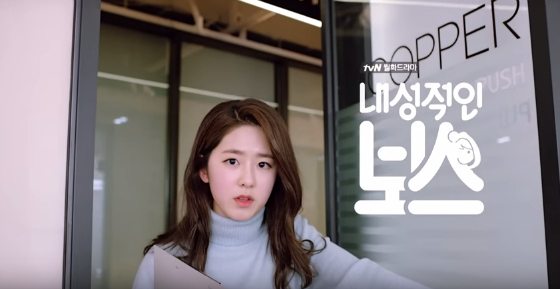 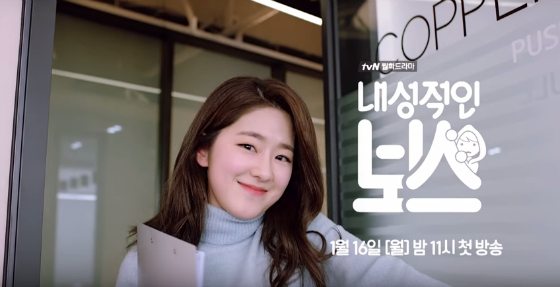 The posters are cute! Love that our maknae is emulating Song Sunbae!

Ha, so Eun Jae Hoobae has learnt from her mentor Ji Won Sunbae and has now entered into the world a master herself.

I'm sooooooooo ready for this!

Looks fun, fresh and cute! I love office dramas, and the protagonists are a very interesting pair.

Its cute its cuteee its so cuuuteeeee...
Gosh january..... Let's come faster for sure!!!!!

The little guy in the hoodie is the best thing in the written title. Being an introvert, I hope they portray it correctly, though its comedy so I can already see that they have multiplied it by 10.

Hello fellow introvert! The"please don't pick me" thing is real! I think i'll have a lot to discuss on this show. See you in the recaps.

I love that little guy in the hoodie! Didn't notice until you pointed it out, but it's so adorable and such a neat addition to the title.

It is one of the smartest addition I've seen in a logo/title.

Yeah! I love him and the way he seems to pop in and out.

Posters look quite good and Park Hye-so looks like an experienced Kouhai now.

This will be entertainment with some blows of emotional scenes here and there.

I've been waiting for Yeon Woo-jin comeback, and trusting his natural comedic vibe, I know we'll love this one too. Not to forget the team behind this production, I do wish this hits daebak.

I really hope it becomes another hit too. Tvn was kind of in a ratings slump in 2014, but now they've garnered so much attention and the ratings of their dramas are generally much higher, so this show has a chance of doing even better. I'm really hoping this drama will revamp the Mon-tues time slot like this PD's last drama did.

The posters are really a good idea ! Thumbs up for the creative team. :D

Park hye soo is in this? I'm ready to watch it now!

So basically Joo Won's two "Dongsaeng" meet here as couples?That girl,she is on the roll,isn't she?

Man, can January get any quicker? I just one this drama so fast that I'm so ready to skip New Year's. Hopefully the drama will bringing the same vibes as in the last sleeper hit from this production team because that will be the hoot. Park Hye-soo looks so grown up although it wasn't that long since Age of Youth ended. I think that's a good sign. Also, yay for another quirky!Yeon Woo-jin in drama leading role.

Haha! I am looking forward to this.

SO CUTEEE
I LOVE OFFICE DRAMAS
I WANT SOMETHING SIMPLE AND CUTE AND LIGHT IN MY LIFEEEE (like weightlifting fairy, but honestly i didnt think that last episode was considered light and almost cried my eyes out)

So cute! It's been a while since I last saw Yeon Woojin in anything. Why does it look like he's getting younger?!

It's funny because, in his Oh Hae Young cameo, I actually thought he looked like he aged quite a bit, but now he looks even younger than he did in Marriage, not Dating!

Looks fun! And I love Marriage Not Dating! Such a sleeper drama!

Dammit. Im supposed to abstain from dramas after RDTK. But this is too cute! What to dooooo

YAAAASSS!!! I can already sense their awesome chemistry. Definitely must-watch this 2017! :)

Sounds promising, but while I loved Park Hye-soo in AoY, Yeon Woo-jin, turned me off ever since his role in "Arang" (but maybe this would change my impression of him).

Have you tried watching him in Marriage, not Dating? Comedy is his strong suit and he had a lot more fun with his character there.

I love this teaser, they are so cute!

How did Park Hye Soo grow so fast? This role is totally opposite of her character in Age Of Youth.

I love that Park Hye-soo previously played the female version of Yeon Woo-jin's character in Age of Youth where she portrayed a socially anxious and introverted character. The irony isn't lost on me, ha!

On board on board!

This looks and sounds so good and cute! I'm already rooting for Mr. Introverted Boss and Ms. Extroverted Rookie as individuals and as as a couple. I wonder if he's just shy or like you mentioned, he has a lot of genuine fear and phobias, which if that's the case, I'd feel really bad for him and I wonder how they're gonna tackle that subject–probably with a touch of humor and a lot of heart. I'm all for that. The posters are spot on and I love the literal concept brought to life through the photos–what better way to introduce the characters to us than to be literal about their character descriptions!? Perfect. I wish more drama posters were like this–fun, colorful and gives us just enough information on the characters. Anyways, this looks fun and charming (thanks to the leads), so I can't wait to check it out!