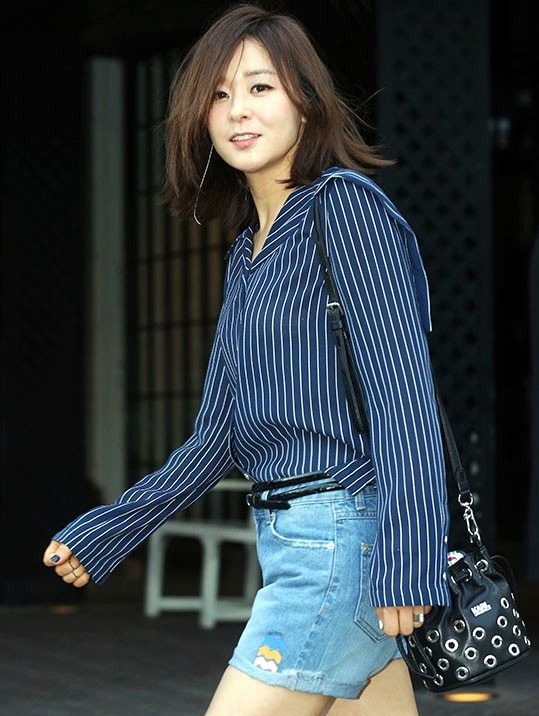 I know we’ve seen a lot of dramas crop up in twos or threes whenever a new trend hits, but this is a weirdly specific one. Choi Kang-hee (Heart to Heart) is currently considering an offer to headline a new KBS drama called Mystery Queen, about an ajumma who loves mystery novels and starts solving crimes alongside a detective using the skills she learned from books… which is entirely separate from the Jang Nara drama Housewife Detective, about an ajumma who goes to work for a private eye. Between these shows and that Ha Ji-won movie about a novelist solving a murder, I guess ajumma sleuths are a thing.

The drama’s script won an open screenwriting competition held at KBS, and will be directed PD Kim Jin-woo, who was the second director on Healer. It’s about a woman who wanted to become a police officer, but she got married young, which prevented her from pursuing her dream. She’s curious by nature and has a bit of a bumbling idiot streak in her, but she’s a lovable character who’s been a huge fan of mystery novels since her youth, enough to have once dreamed of being like Agatha Christie. When watching any mystery movie or drama, she guesses the culprit as soon as it starts.

She lives the regular life of an ajumma, with a nitpicking mother-in-law who watches her every move and an aggravating sister-in-law who treats her like an ATM. But a chance opportunity allows her to cooperate with a police detective on a case, and though their methods are completely different, they’ll end up as the perfect partners.

It sounds like it could be a really cute comedy, especially because I’m remembering Choi Kang-hee’s adorable crush on police detective Lee Jae-yoon in Heart to Heart. I really hope they pair the ajumma Nancy Drew with a gruff, badass detective—that’s a buddy cop duo I’d like to see.

KBS’s Mystery Queen is scheduled to follow Chief Kim on Wednesdays and Thursdays in March.

all about this actress is soporific... a big NOOOO

not familiar with the actress but the premise sounds interesting. i hope the mystery aspect of the drama is good

You should watch her on Protect the Boss, she played the female lead along with Ji Sung and Jae Joong (JYJ). It's an office romcom that really hilarious ?

I'm looking forward to it, this may be one the best roles for her. Her most recent work was not impressive.

Does she really qualify to be an ajumma?...Yikes(tongue in cheek)

Love her. She was spectacular in Heart to heart. A drama that wormed itself into my heart.

I didn't watch Heart To Heart so i dont know about her in that drama but in her other works that i have watched, she was quite mediocre. Her last work Glamorous Temptation was also not something impressive, not to mention the zero chemistry she had with Joo Sang Wook. (she had on the other hand the chemistry with the Prime Minister though, lol).

If they are seeking someone in 30s since the heroine is ahjumma type, we do have some other actressess who act better. This drama looks will be focusing mostly on female lead part, so a good actress definitely will make this drama more fun to watch. How about giving someone like Park Shi Yeon or Jeon Hye Bin?

Anyway, maybe she will do well in romcom rather than something melo. Perhaps will check this when it starts later, the plot sounds interesting.

A badass and grumpy Ma Deong Seok please, and without a heart of gold.

It seems people either love her or hate her. I loved her in My Sweet Seoul, Protect the Boss and Heart to Heart! I'd love to watch her as an ajumma sleuth.

I love her since 10 years ago I guess. One of my First kdramas was her "Sweet red bean breads". Really nice.

Seemed like another new trend?? Why are they all making similar plot for the dramas (both are on ahjuma/housewife assisting in detective work ???)

Oh, this sounds exactly like the Bengali daily drama series "Goenda Ginni" (lit. Detective Housewife) that just finished airing at the end of last year. It was a bigger emsemble drama where the police detective was the housewife's brother-in-law's brother-in-law. It was quite a good series and both my parents and my grandma were hooked :)

I've enjoyed her perfomance in dramas I've watched; if she accepts hope they cast a great detective. Can we have Kim Tae-hoon (Fantastic) as the detective, please?

I don't see this as being A Rom Com if the lead is married.

I don't know why but i never liked this actress. Either in 7 level civil servant or in heart to heart. She starred in Protect the Boss too if i'm not mistaken, and I didn't like her there too. Really looking forward to a drama that can make me change my perspective of her. Hopefully this is the one. Wishing her all the best..

You see the film Heart to heart, I saw Choi Kang-hee's acting in this film is much breakthrough. Anyway I still love her since 2004

I love her much at Glamorous Temptation film.

definitely warmed up to her since heart to heart... didnt like her on her previous dramas but ive grown to luv her. fighting mystery queen choi kang hee!

This post is making me smile so much, now that Mystery Queen S2 is around the corner. :)