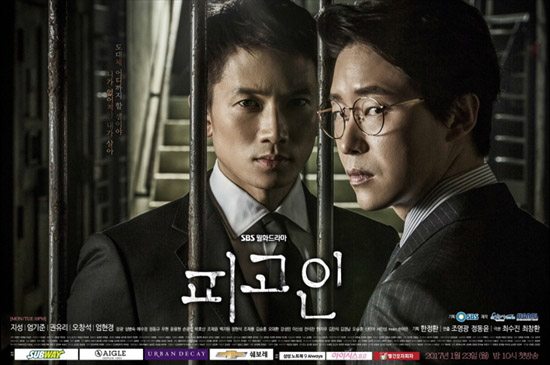 There’s certainly no missing the motif in these latest posters for the upcoming SBS drama Defendant, with Ji Sung (Entertainer) behind bars and a stern-looking Eom Ki-joon (Masked Prosecutor) determined to ensure that he stay there.

The premise of the drama is a bit like The Fugitive with a dash Remember–Son’s War mixed in: A righteous prosecutor (Ji Sung) is caught up in a large-scale conspiracy and pegged as the murderer of his wife and daughter. Trouble is, he has no recollection of the murder, having somehow lost four months of his memory, which makes it difficult to assert his innocence.

In the poster below, which shows him sitting in his prison cell in despair, the text reads, “Hope never disappears.” It’s a promising line in the midst of a bleak situation; the hero refuses to give up on himself and vows to find a way out of prison. The drama promises us that he will regroup to make a gratifying counterattack.

Eom Ki-joon plays two roles in the drama: first, a “shocking devil” (the previously released teasers hint that he’s the real killer) who ends up dead, and then his twin brother, who faces off against Ji Sung in a relentless confrontation. I’m pretty excited about this antagonistic setup, because both are fierce actors who do even better when they’re up against strong co-stars, and I can’t wait to get sucked into their black hole of intensity.

Oh Chang-seok (My Heart Twinkle Twinkle), SNSD’s Yuri (Gogh’s Starry Night), and Eom Hyun-hyung (Bluebird’s House) also star, and are included in the five-way poster at bottom. Defendant will be a 16-episode Monday-Tuesday drama on SBS, and premieres next week on January 23. 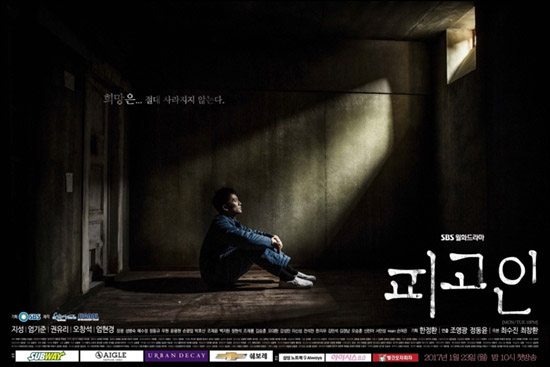 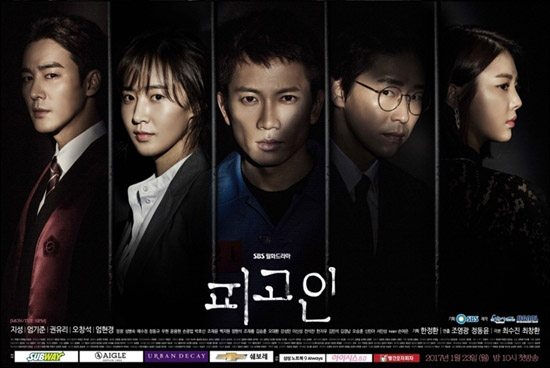 Her acting in the second episode wasn't totally a sore to the eyes. Let's hope she can get it decent.
But I really do hope that this drama will get recapped. I know that the beanies reserve the right to recap whatever they want, but I think, based on the very first two episodes that it deserves a shot. I will go to sleep hoping for a pleasant surprise when I wake up. When everything else was gone, there was still hope...

Okay I gotta admit I was never attracted to Ji Sung's look but more his acting. BUT DANG!! Does he looks FINE here!!

Ji Sung made the best use of manliner ever. And perfectly tailored suits. He was absolutely smoking hot as Shin Se Gi. Funny is that I found him sexy only as Shin Se Gi. Otherwise I find him to be just, you know, good looking in a very manly way - rare in dramaland, but just really good looking not hyperventilation-inducing as the above mentioned character.
As an actor, yes, he is one that at least makes you start watching a drama just for him only. (*cough* Entertainer *cough*)

I loved Shin She GI and his arrogance, plus who can forget that red hot suit? My sister was swooning every time he appeared!

But I was more of a Cha Do Hyun fan girl. I found myself drawn to his apparent normalcy and in admiration at how he was constantly taking responsibility for their (his) actions, the way he isolated himself, not looking for any pity party, and unexpectedly touched by his resigned acceptance that he could never be normal.

I am convinced that the only two people who can pull off a red hot suit in dramaland are Ji Sung and Lee El. Phew, that hotness.

Lee El is bae and a goddess!

I'M SO EXCITEDDDDDD I love dramas with the two leads going against each other, hero vs villain.

So far everything looks intense, even Yuri in the teasers. One thing I can be assured of is that, since this drama doesn't have the romance tag, I won't have to see a leading lady be reduced to a love interest, and she'll have an active role in the story (coz Ji Sung's character depends on her to help him get out of the situation).

I wasn’t really liking Ji Sung’s short hairstyle in the past teasers, but he looks good here. The posters overall look cool.

All the screenshots have "Subway" in the lower left. Guess he'll escape using keys smuggled in to his cell in a you-know-what (?)

Subway became a scarecrow of the K-drama. Is it really any type of discussion better than no discussion at all? Has Subway ever imagined that it would become a drama on its own just to see Subway even in the posters?
I think they should make their own drama, Lotte style. I think that would get a better feedback and would be more honest. I have even the title: The 49 Last Subways.

How about "You from Another Subway"? "Subway Hunter?" Or better yet, "Moonlight shines through the Subway?"

Man those cheekbones on Ji Sung and the sharp jawline... so is Lee Bo Young's face btw. Wait is it me or does he and his wife kinda lookalike?

I've always though so too!

I was excited for this until I saw that Yuri is in this drama. Geezus, her acting is lacking still. She's been acting for how long and she still can't convince the viewers. She's amazing as an idol and in variety shows, but her in dramas is still not easy to get used to because she doesn't convince her role well enough. Now, before anybody jumps down my throat talking about, "I'd like to see you act better." First and foremost, I am a viewer, and dramas do not succeed without the numbers of their viewers. I have no doubt this drama will excel considering the list of impeccable actors, however, her scenes may be weakening the episodes. I was excited to see her in Neighborhood Hero due to the high anticipation of the drama, but I was extremely disappointed when I watched her scenes and felt like she was lacking.

the first time i saw Park Hyung Sik, and that was in Hwarang, I thought of Ji-Sung except the height...maybe it's in the shape of the face

In the first poster, I couldn't tell if it's Jisung or Eom Kijoon behind bars. Or is that the point of the poster? That's really cool!

Me too me too!

Okay, I have a sligtly opposite opinion here. How he looks in the poster is a subjctive opinion I suppose, but thats a really terrible photoshop job IMO. All pictures now a days are re-touched, especially in posters, but they went too far. That doesn't look anything like him! You could say it's the hair-cut and make up, but no that's not it. They've made his face look longer, and I mean along the Z axis, like the distance between his nose and the back of his head. (Wow that sounds painful). Maybe I remember him best from Kill me Heal me but its not like we never saw him in side profile and his face is not that long!

Quite possibly, the bars have something to do with hat as well.

Now that I think about it, I'm getting major 'X-Men' flashes, where that guy ssuuueeeezzeeesss through a set of bars.

Nothing New about the story, so similar to Hollywood or korean movie/dramas etc I've been watching, yet Jisung doesn't looks god with that hair. He looks old, so Old