Love-smitten eyes and sweet handholding in Tomorrow With You posters 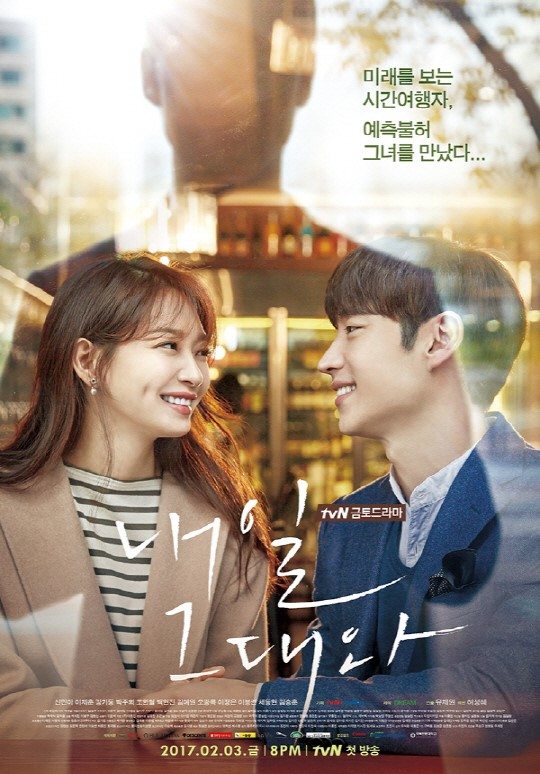 Official posters for tvN’s upcoming drama Tomorrow With You have been released, featuring the breathtakingly beautiful married couple at the center of the story. Lee Je-hoon (Signal) stars as a time-traveling investment firm CEO who has everything: a handsome face, abundant wealth, and even a great personality. He meets the girl who becomes the one unpredictable variable in his life, and ends up marrying her within three months of their first meeting. The time-traveler’s ever-sunny wife is played by Shin Mina (Oh My Venus).

In the first main poster, Lee Je-hoon and Shin Mina have only eyes for each other and wide grins on their faces. A shadowed outline of Lee Je-hoon peers at the obliviously-in-love couple through a window. The caption on the poster reads: “A time-traveler who sees the future meets an unpredictable woman…”

This couple is legit too attractive for words — the two character posters capture a moment between Lee Je-hoon and Shin Mina, where they are holding hands on the street and gazing adoringly at each other. Lee Je-hoon looks the picture of a doting husband, and his poster states, “My future self said I would marry this woman.” Hers states, “I married a time-traveler.”

The 100 percent pre-produced Friday-Saturday drama Tomorrow With You will begin airing February 3 on tvN. 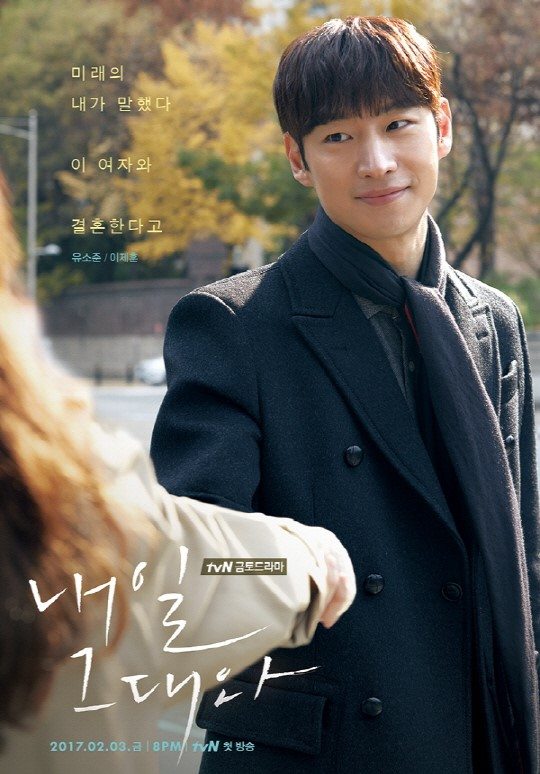 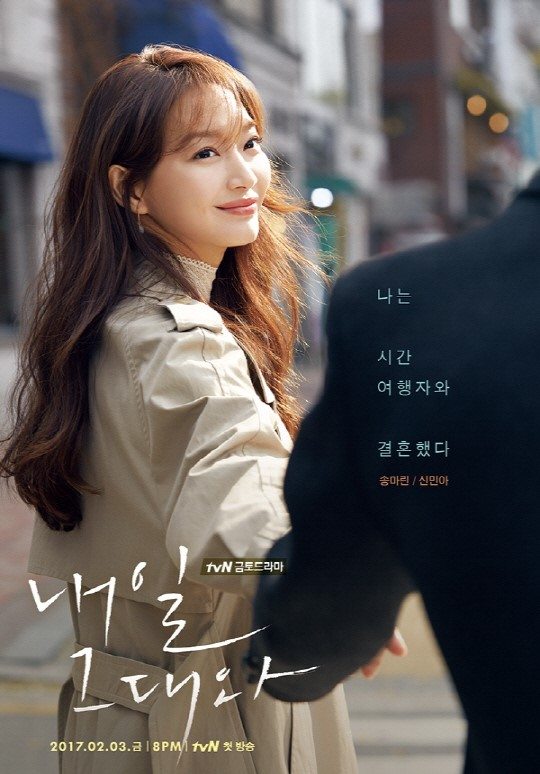 Pray hard guys pray that this is good please be good look at this couple!!! *sends offerings to drama gods*

Hey Callie! I just saw your reply on the last post about this drama and thought I'd answer here. While I do think it's possible that the PD has someone else in charge of music, I think they must often work with the same trusted teams from drama to drama (especially if they're on tvN). And because they have ultimate say on the final product, I do give them credit for making sure that it's scored to their standards.

For instance, the Coffee Prince director frequently featured Tearliner and Low-end Project in all her works, including Cheese and Heart to Heart. You can see that she always has these expansive indie ost selections for her dramas and her moments are always scored well. This is why I'm so bummed she bombed her own career.

The OHY/MnD PD also reusues several instrumentals in his dramas and often has Ben do an OST. I just watched a long preview for Introvert Boss and, sure enough, I heard Ben's voice. I'd even go so far as to say that PD works with the same set and costume designers on his dramas.

The way this PD scored OMG felt very similar to King of Savvy and this is why I have trust in him again here.

I guess it's kind of like how movie directors will often work with the same composer for a lot of their projects.

They are a beautiful couple for sure. Lovely posters.
The first one is especially compelling. I was instantly drawn to their happy faces staring at each other, but then I noticed the somewhat ominous shadow watching them. A reminder of the other side of this love story.

what? I hadn't even noticed the shadow until I read your comment because omg their smiling faces and the way they're looking at each other is too sweet for words...but hmm wonder if that's the time traveler's shadow or someone else's?

Where is the shadow? Its just a macro-zoomed in picture, so objects in distance are out of focus.

The way their hands are positioned and their body language is a little cold to me. Their faces look happy but I'm not feeling any spark. Hope that doesn't mean anything for the drama!

Love them both. Will be tuning in for sure.

I'll tell you what, it's tVN's world and all the other channels are just living in it. Everybody else really needs to step up their game!

smile instantly after seeing the very beautiful posters especially the first one.

Is this drama trying to kill me before it even airs?? I'm already in love with it.

I love Lee Je hoon to death. While he's so amazing as a badass character, I can't help but excited over his dreamy, mesmerizing smile in a happier character. Well, I'm sure this one is not as happy as it seems (what's with the shadow looming over them in first picture?). And Lord, he's so, so, so beautiful in those pictures I might dead. And Shin Mina, of course she look like a princess every time I see her. They look good together. Please be good, show!

Shin Min Ah looks so different here! I would never recognize her if not for her printed name. That makes her character interesting to me.
I also love Lee Je Hoon. My best friend has FINALLY relented to watching K-dramas and we've just finished episode 8 of Signal. I'm really appreciating LJH's fine performance more than the first time through...so really looking forward to this new drama!

I also couldn't recognise shin mina ,but the poster sure was a nice one .
can't wait for it be aired.