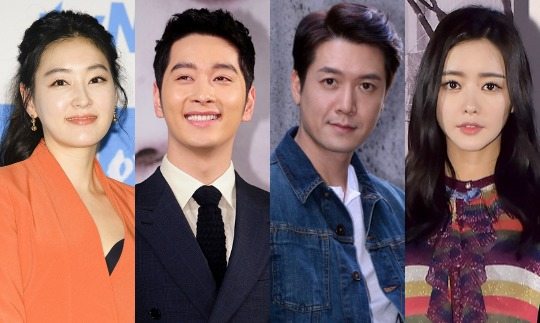 A new drama called Housewife Detective is in the works, and these four actors have reportedly received offers to star and are positively considering: Park Jin-hee (Oh My Geum-bi), 2PM’s Chansung (Ms. Temper and Nam Jung-ki), Jo Hyun-jae (Yong-pal), and Hong Su-ah (Malice).

Written by Park Eun-young (Hwarang) and Park Hee-kwon (Flu), with PD Han Chul-soo (My Little Baby) at the helm, Housewife Detective is about a struggling single mom named Myung Yoo-jin who coincidentally becomes an assistant to a self-described genius private investigator in order to make a living, and together, they tackle complicated cases. Park Jin-hee is up for the lead role, and Jo Hyun-jae is up to play her boss, hot-blooded detective Cha Jae-hoon. Character descriptions have not been released for the roles Chansung and Hong Su-ah have been offered.

None of the four actors have confirmed at this time, and there is no broadcaster attached yet, with JTBC denying early reports of having Housewife Detective on their programming slate. The production company for Housewife Detective stated that the drama is still in its early stages and that casting offers have been sent out to numerous actors. They expressed concern over false information regarding casting and content since it can influence potential broadcasters’ decisions, and added that Housewife Detective will be completely pre-produced and simulcast online in Korea and overseas.

I loved Park Jin-hee in Memory as a determined judge and mother grieving the loss of her son, and I can picture her taking on a lighter role as a scrappy housewife sleuth/Watson to Jo Hyun-jae’s Sherlock. If she confirms, it’s likely I’ll tune in!

Housewife Detective is currently sans broadcaster and is expected to release domestically and internationally later this year.

I didnt watch anything of Park Jin Hee. But in Oh My Geum Bi she does really good job (the mom as well). I like her solf, warm vibe.

If you haven't seen Giant yet, Park Jin-hee plays Lee Beom-Soo's love interest. It's 60 episodes long 0.o, but it has a great cast.

I love her! Watched her in Fermentation Family, and then Women who still wants to marry, and then Memory. I hope she considers this offer (if it is indeed being offered to her).

It's been a while.

Jo Hyun-jae, was my first Fav actor, long before i fall in love with Healer couple, and become a Changminer... aka. Changwook and Minyoung couple shipers... i used to love what he JHJ did in Ballad of the prince when i was much younger... he was like the Prince of my younger days... his tears was the dew of the morning, in Ballad.. until Yoo Seungho took over the rein of the new Prince of tears.. hahah. but really found his takes in Yongpal not that 'skillfully evil" ... but was nonetheless sadden when he died in yongpal and wasnt given a chance reconciled with his new and late found love with his wife in Youngpal... jaebal. don't be a baddie in new show. and win back your girl, and happy ending pls for Jo Hyun Jae. Hyun Jae, definitely one of the most striking alluring ahjusshi in Kdrama industry nowadays... he just need a break thru role again. just like what Goblin did to Gongyoo, our Buckwheat Prince.

I'm thrilled to pieces at the prospect of JHJ's return to Kdramaland. I'd be even more thrilled if he did a sageuk. I've missed his presence on the small screen since YONG-PAL.

THE KING'S DAUGHTER, SU BAEK-HYANG was my gateway sageuk. Prince Myong-Nong will forever be my archetypal Korean prince, and his father, King Muryeong (Lee Jae-Ryong), the fierce protector and wise ruler to his people. Seo Hyun-jin was terrific in the title role, supported by a wonderful ensemble cast.

I've watched a bunch of JHJ's earlier work, including his first turn as a prince in GREAT AMBITION, SONG OF THE PRINCE, 49 DAYS, LOVE LETTER, NINE TAILED FOX, and THREE FATHERS, ONE MOTHER. It would be fun to see him playing a detective.

I loved Park Jin-hee's performance in GU AM HEO JOON.

I love him since forever. But more so in 49 Days. Really, really looking forward to seeing him again in the small screen. Park Jin Hee as the female lead? Yes, please! Jo Hyun Jae si please say yes if you get the offer I want to see you with Park Jin Hee so much.

But Chansung, he so meh in Nam Jung Gi. And I never watch Hong Soo Ah before.
JTBC only produce pre-produced drama this year. They really want to increase their quailty. (But why they have too much money while most of their drama flops?)

I think he was quite good in Ms Temper.

But in Ms. Temper, his parts are comedy. But his acting stills lacking, how can he put in a heavily drama?

I dont think that most of their dramas are "flop", you can not compare TVn ratings with JTBC, when a JTBC drama does 2% it is considered a success, like it was the case for tvn few years ago. It is a very young CABLE channel which is building up its audience step by step.

jTBC news now taken the highest rating of GPC system (about 10%), but they don't have any drama cross 5% about 2 years.

And Chansung did such a great job in Mrs Temper and Romantic Doctor. Hopefully they confirm the casting. The main actors look promising too.

Loved Park Jin Hee in Memory and am loving her even more in Oh My Geum Bi...a SERIOUSLY underrated and under watched drama

I was so waiting for Jo Hyun-Jae to come back to Dramaland;
And I also liked Park Jin-Hee in Memory. But I think Hwarang is pretty mediocre so far, so I do not look forward to them taking on a project from the same scriptwriter. The fact that JTBC essentially rejects it, also is a big red flag, in my mind. Sometimes, it is worth while to say "No."

Chansung was a surprise delight in Miss Temper. Memorable.

I wonder what happened to this now that we're getting Mystery Queen S2...