Strong Woman Do Bong-soon protects her man in new posters 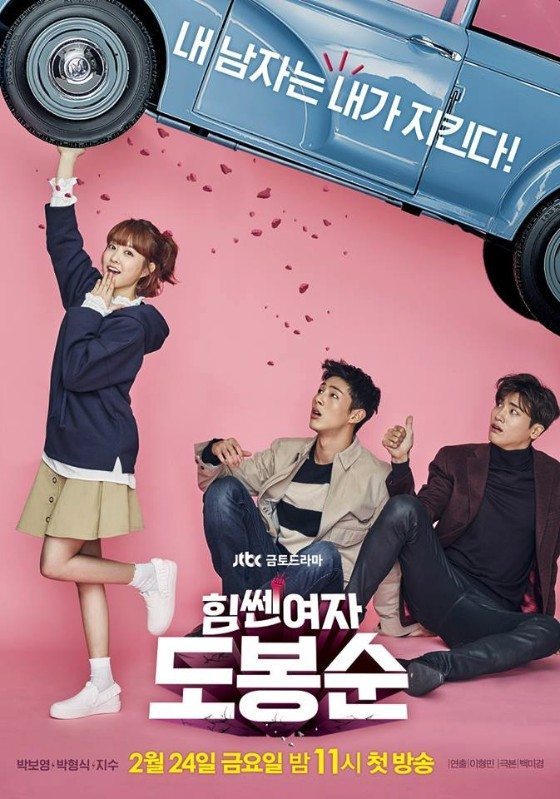 A couple new posters have been released for upcoming JTBC drama Strong Woman Do Bong-soon, and they’re adorably hilarious. Park Bo-young, who stars in the titular role, shocks her two potential love interests, played by Park Hyung-shik (Hwarang) and Ji-soo (Fantastic), with her immense strength. In the first poster, the two grown men stare disbelievingly at her as she lifts a truck with one hand, while the words printed on the vehicle read: “I protect my man!”

The new rom-com drama Strong Woman Do Bong-soon is about a petite heroine who was born with almost supernatural strength. Because of her god-given talent, she is scouted to become the bodyguard of a quirky young CEO, played by Park Hyung-shik. With that setup, it sounds like there will be plenty of funny romantic hijinks that will ensue. However, she is already deeply infatuated with her first love, Ji-soo, who is an upstanding, righteous young man.

Indicating her personal feelings toward them, Do Bong-soon carries both men in different styles in the newly released posters. She holds the man she must lug, Park Hyung-shik, in a fireman’s rescue carry and his one thought is that Do Bong-soon is the best girl ever. On the other hand, the man she wants to embrace, Ji-soo, she princess-carries in a bridal style, but he just thinks, “Do Bong-soon, what is this girl?” 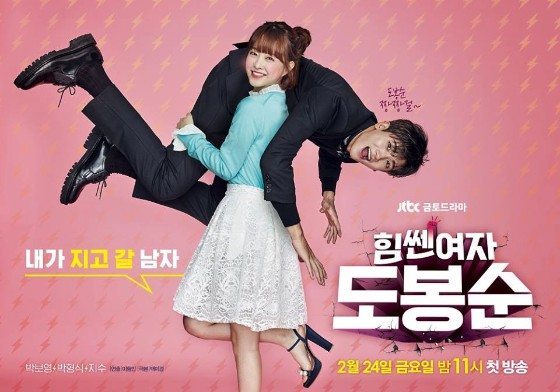 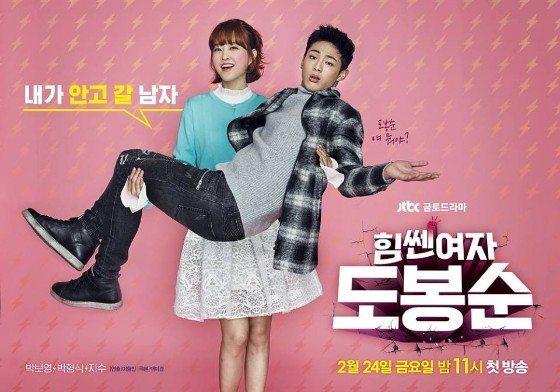 I have a feeling that this is gonna be my fave among everything in this new trimester.

I love this casting so much!

It does look like a laughter-filled drama. I can already sense the wimpy chebol vibe like in Protect the Boss from PHS's character, judging from his character's thought in the poster.

Cute!! looking forward to it :)

This show is already going against so many cliches. Love it!

Knowing what kind of audience they are pandering to, I am not holding my breath. Portraying female strength (be it physical or character traits) in a buffoonery like manner doesn't count as fighting cliches in my book. Might as well just enjoy the laughs and my favorite actress Park Bo-young.

I have faith in JTBC.

i am so psyched i cant even stand it! let the cute commence!

I wish Ji Soo was the lead. I haven't really seen Park Hyung Shik in anything. I hope he's at least as good as Ji Soo cause PBY is my most favorite actress, and she deserves to have a great leading man.

Great! I've only heard good things about him so it's given me relief.

He is a good actor. I was skeptical of him until I watched "Hwarang" and started to check on his previous works. If there's anything, even when the drama is pretty bad like "High Society", he was still commendable and did not let the leads bury him. So no worry, the actors here are all promising.

The leads couldn't have buried him considering how awfully their characters were written. I'm still salty over the fact that the writer wasted Sung Joon and Uee's chemistry. Though I really hated Chang-soo, Park Hyung-sik proved that he's a pretty decent actor.

I've only seen him in two dramas but he is good! He has a natural charm to him...it's his little facial expressions and even the way he talks...I like it! Hope you will give him a chance! Not ready to say Bye to Jidwhi yet...but looking forward to more Park Hyunsik! Yeah!

Neither of the leading men are on PBY's level in acting or charisma wise, or just plain interesting enough for audience over 20. Judging by trailers, they will keep it a simple slapstick comedy.

I beg to differ...I'd say PHS is pretty much on the same level as PBY - she's just had more roles to showcase it.

I would say PHS might look too young for people above 20, so he might not appeal to them just like you said, well I'm also above 20, but acting and charisma wise, the guy is very good, he shines more than the lead in some of his dramas despite his character being written kind of annoying sometimes.

Hyungsik's naver comments are mainly from 30s-40s. he even said in his interviews, young girls doesn't really like him, his fans are mainly noonas. I am above 30s and I like him since Real Men :)

Thanks Sandy for the insight. If i could get a chance to meet him, i'd tell him -- well Hyungsik, you are wrong! I am just a year older than you and I have been your fan since Real Men days!

Ooh really? I was just replying to the comment from Marina and explaining what I think about her statement that women over 20 might not have an interest for him, I don't intend to generalize, just offering my reason on why maybe they wouldn't be interesting to him from my pov hehe ^^

Me, myself as a 22 year old think he's very charismatic for me, well he's still older than me, but I do understand when older woman prefer older and manly faced guy, glad that many noonas like him tho :D

You have nothing to worry about. I'm positive Park Hyung-sik can hold his weight alongside Park Bo-young. He's a very charming and convincing actor.

Or she can hold his weight, or carry him on her back :D

PHS might not be a stellar actor but he is a very charming actor. He has great chemistry with his female and male cast. I think this role suits him very well.

This looks exciting and colorful. I guess I'm of the unpopular vote that Park Hyung-shik is best as the male lead than Ji-soo. :)

Nah, you're not alone. I think PHS is a better choice for male lead. I much prefer PHS to JS.

Ditto! Love both men, but Park Hyung-sik has the edge for me.

No you're not alone. Hyung shik, despite not being the main lead in his recent dramas showed that he's a main lead worthy by acting his role so well. That's why I'm so glad that he can prove it more to the public through this show

I think i'm gonna fall in love with the main couple...

Cuteness overload! Bring it on. Febuary 24 should please come faster, i need some cute to balance the serious tones of most dramas airing right now

HAHAHA hyungsik's expression in the first poster is perfect.

I'm glad I was not the only one who noticed..! So looking forward to this cast.

Me too! Even though he seems surprised, he also looks like, "She's daebak! That's my girl!"

"I made the right choice of hiring her."

I think he's thrilled that she can save his skin.

Saw the posters earlier and felt so giddy just at the cuteness of this trio! Can't wait for 2/24!!

Super happy to see lots of Jisoo updates online these days besides these posters. There's BASSO homme and also Beanpole accessory. The industry is showing some love to our puppy. ❤️

12 gadis | clawing my way back after the longest drama slump

This is sooo cute. And Park Bo-young looks extra small beside her two giant male leads.

I wonder if that was one of the casting requirements? Male leads MUST be about a foot taller than lead actress.

I think any actor would look super tall next to PBY, she's really tiny (I think around 160 cm at most). This might be actually one of the reasons why they chose her for the role, for contrast. Both guys are over 180 cm, so she's gonna look soooo small. I love it, can't wait for it. Big height difference betweeen couples is my weakness.

AAAA This is so cute, hahaha, I'm so looking forward to this, I like this cast so much!!! <3

I have to wait a month? ? I'm going through cuteness withdrawal since weightlifting fairy Kim bok joo is no longer on. Sadly Hwarang isn't really delivering on that front or any of the shows I'm watching. Any suggestions before my withdrawal becomes (more of) a problem??

Eeeep, too cute! The visual discrepancy between a teeny tiny girl carrying men twice her size is hilarious already. 2/24 can't come any sooner.

Cute! I love the tag in Hyungsik's poster that says Do Bong Soon is the best girl ever. Reminds me of the dynamic between our leads in Weightlifting Fairy.

+10000
Who do not want to have a man who thinks that you're the best girl for him despite you're flaws? *hearts all over*

get hype!
PHS as the male lead this time.
please be that feel-good fluffy romcom, show.

Same thought. I need to have a feel-good show amidst all the heavy dramas I'm watching right now

So excited for this! Love the cast! But still waiting till Ji Soo gets a lead role!

Will this be good? I'm not super interested in any of the actors or the plot, but I hope the drama itself turns out good in a weightlifting fairy way (story was much better than what was initially described). The title and description for WLF didn't excite me either, the only difference is I already liked Fairy's cast.

The second poster:
He looks shamelessly happy to be lugged around by a girl. I see laughter potential.

This is one of my most anticipated drama ever!!! My top fav actor/actress/celebs are PBY and PHS! So as soon as I found out they were in the same drama as the main leads I freaked out.

Ooh. This is almost like Protect the Boss... XD

Please please add second female lead as cute as Wang Jihye, and I will live stream you every week, drama, I promise. I love these actors separarely. Might love them more in group. If there is cute second female, it will be jjang!

I'm really looking forward into watching this drama. It seems really cute based from the poster. And, most definitely loving this cast!!

Park Bo young is LOVE <3
and I'm really excited to see Park Hyung Sik acting with her and Ji soo! I want to see how these two actors improved ^^

OMG, I am so loving everything I am seeing from this show. It's looks so amazingly adorable. PBY is also my favorite actress so that just clinches it.

Park Hyung-shik giving a thumbs up in that first poster is the best thing EVER.

I'm always a big fan of Park Bo Young... Oh my Ghost was the last drama i've watched and still its vivid in my mind how cute and lovely that drama was with Jo Jung Suk.

Also i was the a fan of Park Hyung Sik and Ji Soo.. can't wait to watch this drama... For now im into Innocent Defendant-:)