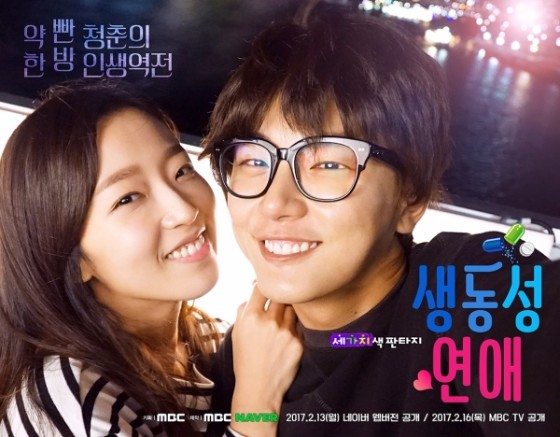 Yoon Shi-yoon (Mirror of the Witch) goes from zero to hero in this week’s installment of Three Colors of Fantasies: Romance Full of Life. In it, Yoon plays an unemployed student, fired from his part-time job, and dumped by his girlfriend, Jo Soo-hyang (Weightlifting Fairy Kim Bok-ju, Sassy Go Go). The trailer for showcases Yoon’s bouncy charm as well as Jo’s earnest hardworking side.

Three Colors of Fantasies is a newfangled drama collaboration between MBC and Naver, completely pre-produced and consisting of three color-corresponding parts, with three 30-minute episodes each. Romance Full of Life is the green part, touted to be about overcoming the struggles of youth with food, and I was excited especially because it’s set in Noryangjin, famous for its fresh fish markets. But the trailer doesn’t look like a traditional foodie drama, unless you count the triangle kimbap that Yoon stuffs into his face to impress Jo Soo-hyang.

Yoon stars as a student for the national police exam who’s failed repeatedly and is now in his fourth year still trying. He works part-time at a convenience store and lives in a tiny room in a youth hostel. He’s also the type who thinks it’s socially acceptable to recommend the best brand tampons to his female customers just as they’re checking out at the counter. There’s only one upside to his life: his girlfriend, played by Jo Soo-hyang. Unfortunately, she’s also struggling to get her life back on track. She initially dreamed of becoming a world-famous pianist, but now she studies until her nose bleeds to get her music-teaching certificate.

When his girlfriend breaks up with him, and he gets kicked out of his room for being late on the rent, then fired from his part-time job for sleeping in the store, Yoon has nowhere else to go. He somehow lands upon this great clinical trial gig that pays him money for answering a couple questions, getting a couple tests done, and swallowing an unknown pill. Dude, I could have told you — never take the strange pill (unless it’s Morpheus offering it to you).

Somehow though, it doesn’t backfire on him: Instead of causing his immune system function to decrease, he magically becomes good at everything he wasn’t before. He gains super strength, keen reflexes, and musical talents as well. When he sees his ex hanging out with another man, he goes ballistic and decides to get revenge by getting a complete makeover to show her what she’s missing.

The web version of youth comedy Romance Full of Life is currently available on Naver, but the TV version will be broadcast on MBC starting this week on February 16. 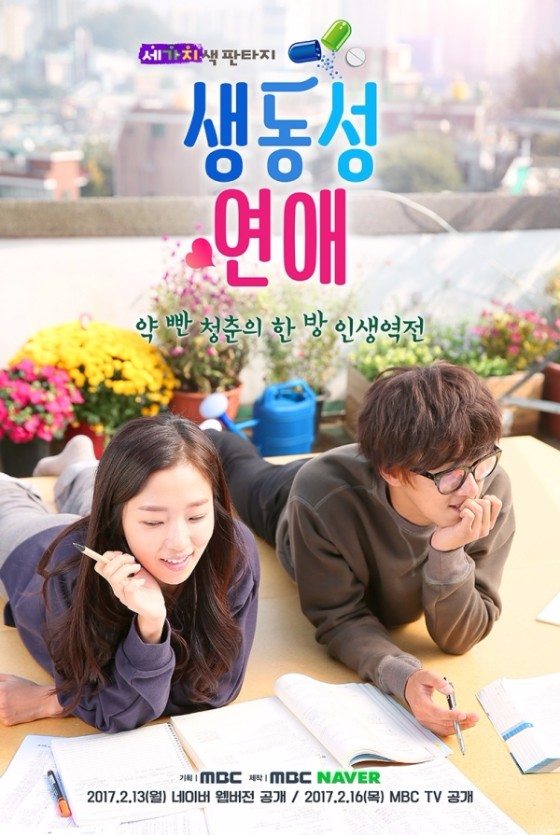 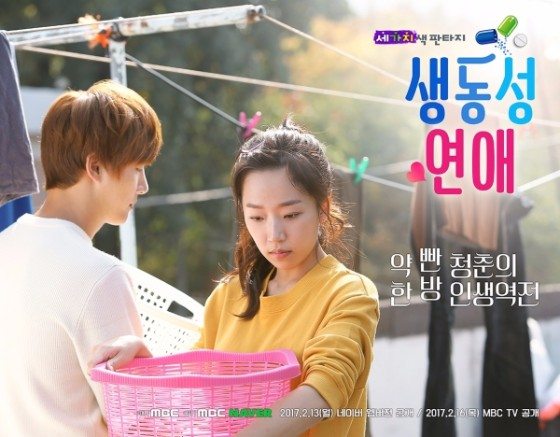 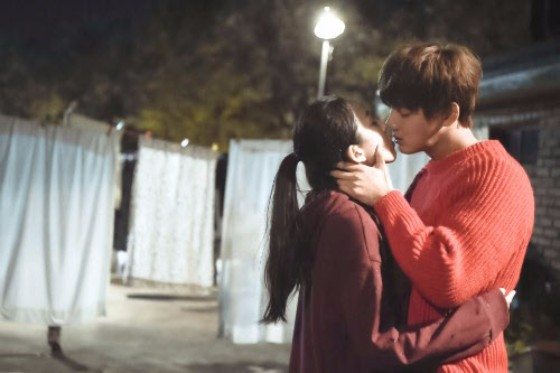 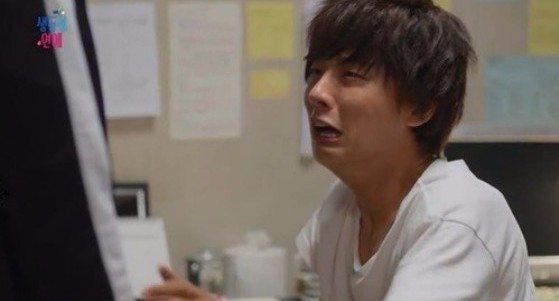 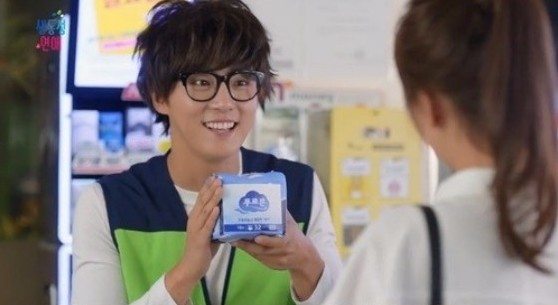 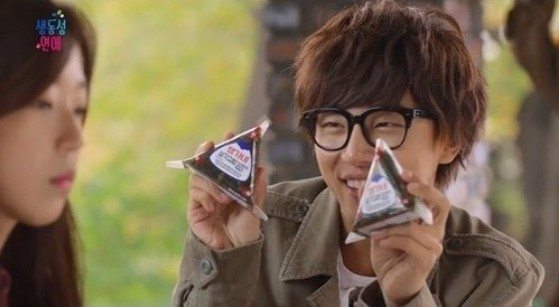 I like Yoo Shi-yoon [Enrique in panda costume is hilarious] and am hoping to see the actress in a new light, because she played various roles but equally nasty annoying...

Jo Soo Hyang was in a drama special with Lee Joon that was heartbreaking. She's quite versatile ^^

I love Jo Soo Hyang! I'm am actually more excited to see this because of her rather than Yoo Shi-yoon LOL She's indeed a very versatile actress; she acts so well as an antagonist and as a protagonist. I loved her in School 2015: Who Are You - her acting there was fantastic, I hated her character so much and it was great seeing her portrayal, especially when she got retribution. Then I watched her in the drama special What is the Ghost Up To? with Lee Joon https://www.youtube.com/watch?v=n22E0wEROOk) and she was so lovable there. I really hope one day she can be the lead actress of a drama

Thanks for the link! Watchin it now..

ENLIQUE vibes everywhere! Can I have this now? Please?

I always used to get freaked out at the pill taking part in The Matrix but it appears it makes you cool like Neo a turns you from Zero to Hero like Shi Yoon, Hmmmmn.
*reconsidering life principles*

He looks so cute with that hair, and that smile is so pretty.

Does the orange hair trend in korea?, I've seen many male actors with orange hair.

That 20 bucks spent to officially change his name... all for nuts thanks to 1 Night 2 Days.

He looks more like the foolish yoon dong gu than yoo shi yoon !! I am excited for his project !!

I'm pretty sure I ain't the only one who thinks that Dongoo looks better in glasses and shaggy hair... right...?

Definitely not alone. I came here because of the glasses :D

Omg I only just clocked that the she was in weightlifting fairy! I went through 16 episodes and never realised she was the mean girl from sassy, wow.

That's because she isn't the Sassy Go Go mean girl lol, that was Chae Soo-bin. Jo Soo-hyang was the School 2015 mean girl.

Wait who was she in Weightlifting Fairy?

She was in acrobatic club. The one who tries to break the weighing scale. N often compared to the bok joo insomnia roommate.

It was Chae Soo Bin.

The first color, The Universe's Star (white) just wrapped up last week and it had 3 hour-long episodes. So I think it's actually three 1-hour episodes for this one as well. :)

And I can't wait for Kim Seul Gi one after this.

He looks so adorkable. Can't wait to check it out.

I'm also getting Enrique vibes just from reading the description, but enter: THE PILL, and suddenly, I'm hooked. Lawl, that's so crazy! This sounds like such a hoot to watch. I'm a sucker for makeovers! I can't wait to check it out!

"Romance Full of Life is the green part, touted to be about overcoming the struggles of youth with food"

One reason I loved Drinking Solo. These shows know that food is life for students, especially cheap/free food.

Looking forward to seeing this drama. The part of the pill part also reminded me of The Matrix.

Dong gu oppa~~ can't wait for this!!! am I the only one sensing ReLife? anyways DONG GU OPPA~~~

I've watched the first color (white) The Universe's Star. The story telling is good & aside from romance they also give emphasis on its life lessons:
- Never miss a chance saying the things you want to say to the people you love because you will never know when will be the last
-Being a star to someone that shines on their darkest moment is enough to let them know that you treasure them even the day comes when they're unnoticeable or gone.

That's why I'm looking forward to this. I want to know what will the series offer next.
Also,
I just have to say that the female lead in the universe's star is soo good in acting & she looks like anne hathaway. I've searched that she is a child star & only 19 yrs old. She got a long way to go with that talent & I hope to see more of her in the future. Please someone notice her. For the record, her name is Ji Woo :)

Finally, somebody noticed Ji Woo. I thought I was the only one whi had seen The Universe's Star. I really went in with zero expectations and the show turned out to be packed with emotions and tightly packed story. Also, Suho was quite frankly great in it but Ji Woo stole the show for me.

Yes to Ji Woo! Eyed her after You're All Surrounded but it was only in the Universe's Star when I saw her again. I'm really hoping to see more of her!

On a side note: she actually reminded me of Vivian Sung from Our Times every time I was watching the drama, lol.

I CAN WAAAAITTTTTT! It has been awhile since I watched Jo Soohyang's drama special and it was great :'
It is now gonna be even better with Yoon Siyoon omg. It's amazing how I hate her to death in school and weightlifting but my heart became so soft for her in the drama special and this hah

The next time I hope its not just a 3-episode drama.

his voice is so grating

Aw man, I was expecting his madeover hair to be swept UP! Up! So close!

this sounds like a scenario that usually happens with the heroines. but now we have a guy... I bet the superpowers backfire somehow

Hmmm this drama is written by Hwarang screenwriter. I'd be better to stay away after the mess she has created in Hwarang

I was like yoon shi yoon, cute drama, nice to watch any time in the next month. But then pill, glowing eyes, jumping over cars, History of a Salaryman, i neeeed to watch this nooow

Shi-Yoon Oppa! I missed you!! Enrique!!