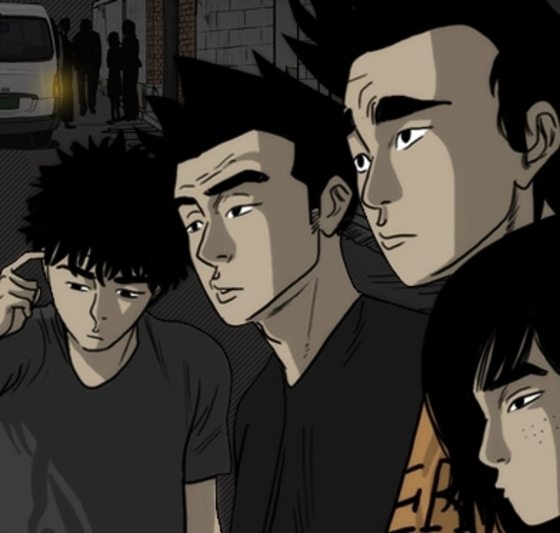 OCN is my go-to cable channel when I want to feel psychological chills and see some quality action thrills, and they’ve lined up a great schedule for year 2017. Right now, Voice is airing to solid ratings, and it’s also got Choi Jin-hyuk’s time-traveling cop procedural coming up in March. Planning ahead, OCN has just announced their latest drama project, titled Save Me. It’s an adaptation based on a Korean webtoon with the literal title Out of the World, a popular series in the mystery-suspense genre by Jo Geum-san.

The drama is unusual in subject matter, in that it deals with the rescue of a young woman who’s trapped in a cult. It’s a story that begins by breaking the bystander effect — where people just ignore victims who cry for help, assuming that some other individual will step in and be the Good Samaritan. It’s like a thought experiment into what real people would do if they heard someone cry for help.

In this drama, a girl is surrounded by suspicious people and quietly whispers, “Save me!” in a dark neighborhood alleyway, and a couple of unemployed youths hear her and run to her rescue. They discover that she’s trapped in some kind of pseudo-religious cult and try to help her, but what ensues is a sequence of horrifying tension-filled events that make us wonder more about the science of the human psyche.

Director Kim Sung-soo (Running Wild, No Name) and Producer Lee Jae-moon (Misaeng, Signal) will be working with rookie Writer Jung Shin-gyu for this upcoming drama adaptaion. No air date has been announced, but it’ll probably be in the latter half of this year, seeing that they haven’t started casting yet and OCN’s schedule’s pretty packed until May.

oh man this drama sounds good! i'm in the mood for a good psychological thriller!(Waiting for the voice to finish so i can binge watch it is so hard to do!)

This sounds interesting... I kind of struggle to imagine it as a drama as opposed to a movie, but I'm really curious to see how this turns out.

Webtoon plot is good. I think it has better psychological points the current ongoing ones.

You read the webtoon?? Links, please?

Wow this sounds so interesting! Now I wanna read it. I hope the show is like a non stop full on speed type of show.

Omg! I love thrillers!!!! I volunteer Moon Chae Won! She would be so good in this!

The plot sounds great. I have always had a weird fascination with cults and even did a project on them with a few friends in high school, haha. I just find them so creepy but interesting!

Right?!?! I was already on board and the producer sealed the deal. Now I can't wait for this.

YESSS YESS YESSSS!!!! I'm going to be in love with OCN by the end of this year. First Voice, then Tunnel and now thisss

I feel the same way.
Yay for OCN!

Oohh the story sounds good and different from OCN's usual crime shows. But a rookie writer.... Then again, the director and producer!

I'm really a fan of OCN's dark, thrilling dramas. They are great at it. Now the casting has to be right too.

Do Kyung Soo,
Yook Sung Jae,
and Lee Hyun Woo for the guys

Go Ah Sung for the girl.

DO would be great in dark thriller! We would def suspect him from the get go though, LOL

Make sure he doesn't kidnap any children after killing their father.

Kyung-soo would be great. And after Goblin, I know Yook Sung-jae could do menacing well.

I'm not entirely sure how I feel about Lee Hyun Woo in a thriller. But this is such a beautiful cast, both in terms of looks and talent.

Does anyone know the site to watch that webtoon?

webtoon is a comic, but I can't find that webtoon at line (http://www.webtoons.com) which usually have the webtoons

Yeah, I already found it on http://m.webtoon.daum.net/m/webtoon/view/outsider but sadly there's no english translation version yet.

Line is owmed by naver, the webtoon is from daum

Like many others, I am a huge fan of both Misaeng and Signal. Binge watched both series. I forgot about real life for awhile. Real life is good but the worlds they built were so uttering captivating, I had separation melancholy after I completed both. Finally went to do some laundry after a few strong cups of coffee.

I have noted this down into my to-watchlist. Looking forward to it.

This does sound very interesting. I'm just concerned if there is enough story to stretch over the entire drama.

This sounds so good! I hope they keep the age range of the characters. Unemployed youths seem to be such a interesting approach as it gives the whole story another layer.
There are multiple capable young actors out there and I hope to see some of the newer ones in this.

This sounds so interesting and creepy! I'm definitely intrigued.

Anyone read the webtoon? Links, please?

I like anything, be it books, movie or drama that centers on human psychology. So I'm definitely in for this drama.

*shivers* The synopsis, just reading it is giving me the creeps. Even though I love psychological thrillers( esp of the serial killer variety), there's something about cults that I find too intrusively creepy, I don't know how to describe it. It makes me afraid of people, everyday people, even friends and some family members. Yep, its that bad. I still haven't finished Village: Achiara's Secret and its not remotely as scary, just very unsettling and convoluted.

Big props to OCN for focus and daring.

The plot sounds awesome. I'll definitely be checking this out.

sounds awesome. i'm already wishing Im Siwan would be in this one...though most probably not. i'm not familiar with the webtoon, but i don't even need him to be a good hero guy...any bad/evil/dark character would do...he's best at acting morally conflicted and swayed to the dark side like in Equator Man. Still his best role imo, which he carried out awesomely. Shame all the teenage version of the main characters in that drama were executed so well but the adult version were just whatever n too overly dramatic/unconvincing. Either way, I have my eyes in this one since it sounds pretty interesting n chilling already, hopefully i won't be disappointed.