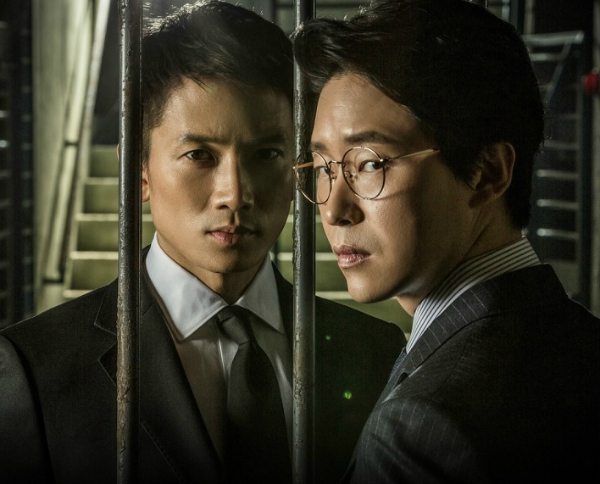 Does this mean that Ji Sung has to spend two more episodes on death row? Because that doesn’t sound like a good time for his character. SBS’s current Monday-Tuesday drama Defendant has confirmed a 2-episode extension, which isn’t a huge surprise given that the legal thriller is a certified hit for the network. It broke 20% ratings last week and hasn’t dropped below that mark, and though the numbers aren’t as high as its predecessor Romantic Doctor Teacher Kim, Defendant has remained in first place on Mondays and Tuesdays from its very first episode.

The extension brings the total episode count to 18, and SBS stated that this was necessary for the story they wanted to tell: “Viewers demanded an extension and we determined that it was improbable to complete the story in 16 episodes, so we confirmed a 2-episode extension.” Well, I don’t know that I believe the part about viewers asking for an extension (nobody ever asks for extensions, ever), and I don’t see why a story that was originally plotted for 16 episodes couldn’t be told in 16 episodes, but whatever. Their extension announcement should’ve just been: “More Ji Sung, why not?”

I’m just worried because I really like the pace and the addictive story—amnesiac on death row!—and dread the thought of it slowing down to accommodate two extra hours if it’s not done well. It’s a tightly woven thriller with well-timed twists and it’s not even procedural, so I’m going to get tetchy if they ruin the pace with storylines that detract from Ji Sung clearing his name and Eom Kim-joon getting his comeuppance. If the Eom Ki-joon twins turn out to be triplets, I’m out.

Defendant will now end its run on March 21, and Lee Bo-young’s new drama Whisper will follow a week later on March 27.

I had a feeling that this would happen, SBS love to milk their dramas, hope this won't hurt the drama.

I love the drama but i am not that excited about the extentsion.

It's okay for me, it's a good drama anyway and that'll give them time to stretch the story a lil bit and I hope tie the ends neatly and satisfactorily. We all know that he's going to lose his memory again, it's bound to happen, he was dropping clues left and right,see. So what do we want to know? How and when MInHo started getting unhinged or if he was that way before in their teens since he is not the favored son. They better execute the two episodes well just so it won't drag.

I hope the story will not drag,let it become better.

me too ,grape not that excited., I laughed at what girlfriday said.

Hopefully the filler material will be happy times with Hayeon and her dad :) Build a new life with a kitten and all that

I can get down with that, if it's the case. Hae-soo and Jung-woo are the cutest. It hurts my heart that they haven't shared the screen since episode 1.
I'd personally want to see a scene or two of Tae-soo groveling for the hell he put Jung-woo through. I want the show to have him to beg for forgiveness, not let it be implied that Jung-woo was so gracious and forgave him instantly. He was so horrible, even if his anger was justified... still needs to apologize.

Oh I'm sure SBS execs are falling all over themselves trying to give the show the time it needs to properly tell its story, nothing to do with milking the ratings, nope, no way.

Lol, triplets! Also, I hope they won't give Eom Ki-joon amnesia for the filler episodes. Then it'd be a story on who remembers first. >.<

How do think writers feel about this extension business when it happens? I mean, sure they might make more money but what if the writer already has everything storyline-wise neatly plotted and well paced for the original length? The broadcast company is basically requiring them to unravel part of their work and make it anew! Personally I would be upset.

I remembered the drama, "King of Dramas" for how the writer gets pressured!

One thing for sure - pressure. But a writer probably have foresee this especially when the rating was already high from the beginning.

I remembered the drama, "King of Dramas" for how the writer gets pressured!

It's normal. Whisper began fliming too late and it need more time to preparing.

I agree that Whisper being behind schedule is probably the main reason. SBS always does this when their upcoming dramas are behind schedule. These type of extensions usually have a negative effect on ratings and overall story quality so I am concerned. I was hoping this Drama would be able to finish on a high note.

2 epi extension - expected it. But bettter than it becomes 20 episode, although the best thing is too keep it like the original plan.

I just started this drama and I am sorry Rebel, this drama took your place in my priority list lol. So far so great. Ji Sung never disappointed and Uhm Ki Joon is doing very great job too.

Sera, you were the first person I thought of when saw this headline on dramabeans' homepage. Totally expected it indeed. And am now worried about a possible drop in quality.
(though I've put it on hold - will binge watch once it's over, Rebel is my priority :) )

Yep as we expected. I already planned to start this when Ji Sung started to recall his memory. So here I am. So busy with kdrama schedules lol. And I know for sure I will Whisper too. The writer is a favourite and so do Lee Bo Young.

I hope the extension will give more moments between Ji Sung and his daughter. Like someone said above.

Love Defendant but no! I think the pacing has been just right, but I know it's been a frustration for some. This isn't going to help.

My sentiments exactly. I cringed at the headline of an extension. As much as I love the drama, I often have to remind myself that we're approaching the 10th episode and things will start to pick up for Jung-woo... now that we've added two more episodes, I'm worried that it'll be a setback with Min-ho given more time to cause more hell and havoc. Like how much longer can he go on killing and ruining lives without being checked? It's tiring and frustrating.

More like JiSung is giving his wife the time her drama needs since Whisper is behind schedule. An additional week would help the production team very much

I would be happy only if Ji Sung got some guyliner. Anything else cannot make it up for the mess they are going to create by extending the drama.

OH MY GOSH YES <3 I still dream of the guy

Since wifey's drama is up next, just picturing Ji Sung and LBY's kid becoming a kid actor, so say 3-4 years from now then have each with a drama on the 3 different big stations same days-and see who wins the ratings war he he! Blessed, talented family!

Honestly, I am not excited with the extension news....I felt the recent monday episode has already been draggy and truth is I am annoyed at how the plot went so far, as far as Minho and JH are concerned. I can basically see through what's gonna happen next. Nevertheless, glad PJW got his memory back... the only development that satisfies my viewing experience. I have completed the main puzzle. So now is only for PJW to get to his daughter and clear his name and put Minho to jail. I seriously think two more episodes will drag the already established story. It's either writers will add more hurdles towards PJW in his quests or add more fillers in the form of Minho and his craziness ploys to thwart PJW. Or a love line development between PJW and his lawyer, which I feel will be out of place and unnecessary. One sided love mayyyyybe...but not from PJW. That plot where writers put Yeon Hee as being indebted to Minho is so recycle material. I have seen that being used in other drama. I expect Yeon Hee to remain a character that would make her own wise decision and join PJW team cos she sincerely loves her dead husband and feel injustice towards what happened to him but they just have to ruin it with a mistress for Seon Ho and her life in a glass castle. Disappointed...big time...Might just drop this or continue watching after the series ends, jisung notwithstanding..... Let's see what happens on Tuesday ep.

I couldn't help it, I'm giggling about the triplet comment!

I guess this wouldn't be capitalism if they didn't try to take a great product, squeeze the reason it is good in the first place and end up with a mediocre one.

Nobody ever asked for an extension, ever. Special episodes, maybe. We would LOVE those. If they could figure out how to double the PPL, then maybe it would work.

Ji Sung Oppa, it will be ok as I can wait patiently to watch your drama once it finished with the extension episodes too. I am already watching Jang Hyuk oppa Voice and loving it. Also, watching Chief Kim drama and two Chinese dramas. So, my drama plate is heavy and full. I will binge watch it later on. ??

oh, man... I am having a very hard time with this drama. It is crushing my nerves. And I need to worry for 2 more episodes. I would be happy to have 2 more hours of Ji Sung, if I wasn´t scared to death for his character.

A bit disappointed but lucky only 2 more episodes. Eagerly waiting for Whisper cos love all 4 leads and storyline seems more interesting

This drama is amazing. Extension or not, all I care about is that Ji Sung gets the grand Daesang this year after being so totally ripped off after Kill Me Heal Me, except for one at the MBC awards when they gave prizes to everyone. If he doesn't win for Defendant I will know the system is rigged for some kind of skewed favoritism. I mean, have ANY of us seen more spectacular acting in a k-drama than Ji Sung here? I think not.

I don't know if my heart can take 2 more episodes of the Defendant! LOL!

This show is very intense. I feel like we went from a series of lovely nice fluffy dramas (Weightlifting Fairy, Man Living in My House) to a series of really intense ones (Defendant, Missing). Good but intense!

There are a very few dramas where it is so much fun to watch particular characters that they can handle more than 16 episodes. But for most of the dramas, 16 eps is about right. More gets draggy.

Actually, I have been wondering about an extension because they've spent too much time in jail with Jungwoo trying to find a way out; that I was wondering if they would have time for Jungwoo to solve the case. So, in my opinion, I think it is good that they got an extension in case the write couldn't fit everything into the 6 episodes left over.

We won't know if this is a good thing until it plays out. There are parts that are draggy, like the Cha Min Ho story, that already feels too long. But I do want the full backwards revealing of what really happened to be given the time needed to make it work. So, I'm in even if it means more heartache while watching.