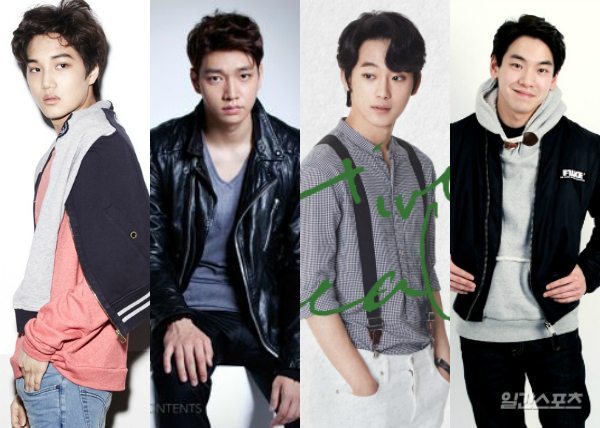 A slew of castings have been confirmed for KBS’s upcoming youth drama Andante, after initially courting EXO’s Kai (Choco Bank) and child actress Jung Da-bin. Kai confirmed but Jung ended up not taking the part, and Lee Ye-hyun (Master—God of Noodle) has been cast in her role instead. The respective friend groups for Kai and Lee Ye-hyun have also been cast, most of them young actors and actresses who are relative newbies with few projects to their name, but maybe Andante will be a chance for them to showcase their talents.

Kai and Lee Ye-hyun play a bickering brother-sister pair whose lifestyle drastically changes as their family moves from the bustling city to the quiet countryside. Unfamiliar with everything at first, Kai’s character struggles to adapt to his strange new school that’s attached to a hospice center, but later he realizes the true meaning of life and love through his experiences there.

Kai is the ultimate antisocial city boy who is a VVIP at his nearest PC Room. He’s the complete opposite of Baek Chul-min’s (Solomon’s Perjury) character, who is the beloved golden boy of their small country town, an elite student with a warm temperament and dreams of becoming a doctor. In contrast, theater actor Kim Ki-soo (Hello Summer, Seagull) plays the troubled school rebel who is threatened by Kai’s arrival because he thinks they’re similar and views him as a rival.

Finally, rounding out the good-looking F4 of Andante is Ahn Seung-kyun (King of Walking), who is set to become the talkative school gossip who goes around like it’s his job to churn the rumor mill. He has an insatiable curiosity about people, and his character is a cheerful student who is supposed to bring a comedic element to the drama.

In the fearsome female foursome, three very different girls become friends with Lee Ye-hyun, Kai’s younger sister who’s described as a cosplay otaku with a prickly personality. Kim Jin-kyung (Yellow), who is best known for her reality TV presence in Korea’s Next Top Model and We Got Married, has been cast as a mysterious student, who contrary to her innocent looks and cool-girl aura, is so shy she can’t approach her fellow students.

Song Ji-hyun (Vampire Prosecutor 2) will play the class president who has a forceful, direct personality and strong leadership skills. Despite all that, in front of the boy she likes, she becomes a tongue-tied bashful girl willing to do everything for love. Lee Ye-hyun’s desk partner at the new school will be played by Baek Eun-kyung (High School: Love On). Her character is a sweet ordinary girl without any special dreams until Lee Ye-hyun, who sparkles with passion, comes along. During the drama, she learns to ponder her future goals seriously.

Wow, they picked up two Solomon's Perjury boys. JTBC really is kinda like a recruiting center for new talent these days.

This sounds like it could be cute. Wish they picked someone stronger than Kai for the lead though, but at least since the cast is all relatively new there shouldn't be that big of a disparity in acting skill.

I think something like this can help younger, relatively unnoticed actors come to the forefront a little bit. Everyone seems to be on the same page in terms of experience...this might turn out to be good, so I'm keeping my hopes up.

The premise reminds me of a story I read, I can't remember where it was, but in some part of the world, there's actually a college/university that offers free housing to students who are willing to live in a senior home and do some volunteering. It worked out amazingly, the senior's got to learn some new things and just have some company, while the students saved some money and learned a few things themselves.

wait, so the lead female is the lead male's sister rather than romantic counterpart? what is the romantic pairing?

Maybe another member of the F4? But I wouldn't mind if there was no romantic pairing actually.

The plot sounds more interesting now. Could be a good slice-of-life, coming-of-age story if done right.

Agree. i wasn't interested before but if, done well, it can be really cute and with depth, painfully relatable angsty youth!

At least all of them will be on the same page, no one will be blame for the bad rating. It would be refreshing to see new faces.

This looks like it will be really interesting! Personally I am not a huge fan of Kai's acting skills but it is clear he is very popular due to being part of EXO and doing several little shows here and there. I am looking forward for him to prove me wrong >///////<

even though i love kai in exo this sounds meh in the beginning, but now i'm actually getting excited. i like that the leads are siblings instead of romantic partners. this feels like a coming of age, slice of life drama which could turn out to be completely heartwarming a la weightlifting fairy or funky like age of youth

The leads are siblings who move to a city and try to adjust. So, it's more like 'Beverly Hills 90210' than 'Boys before Flowers'. I probably check it out for the new actors/actresses.

I'm glad kbs didn't stop to produce youth drama even though most of their youth drama proven to be flop in rating (sassy go go, school 2015, orange marmalade). After solomon's perjury, I'm happy the cast got more project. I love new faces!!!

This sounds like a low-key, warm, little, youth drama. Which sounds appealing to me.

Am I the only one that clocked to see if there were more Solomon's kids added to thecast?? It would be interesting to see WH as a warm village boy...! Kai as a lead.. idk what to say but this story could be cute wih a good script tbh

The story of this drama is so Shoujo manga-esque, like a typical story where a group of girls and boys experience love and friendship together in high school. Well, shoujo mangas are my guilty pleasure, so looking forward to this one!

Man, why didn't they cast Kai as a villain? He's (supposedly, I don't know a thing about EXO) a nice, super talented guy in real life, but he has an incredibly punchable face which he could totally spin into an acting career. Please, drama gods, give me a Kai/Krystal evil power couple. (I'm being serious. Look at Matt Smith in The Crown. You just want to deck him, and it totally works in his favour.)

+1
And I know EXO. hahaha. not really an Aeri but an avid follower nonetheless. He's supposed to be antisocial (so it fits somehow(?)) but true his face is an asset for a bad boy look. Acting with his gf Krystal, would definitely make them the ultimate power couple. ^^

I've never considered his face punchable. He's more of a squishy to me. But that's probably from the History teasers back in 2012.

I can see him being annoying with the right lines though. As long as Krystal is more Bo-na in Heirs than whatever I saw in the first episode of SSL, I'd love it. A slightly more annoying version of the cutest couple in Heirs to very welcome!

My biggest concern : will air in late 2017. I'm afraid of forgetting it by the time it's airing.

I love it when they have balanced number of the boys and the girls. K-dramas seem to prefer triangle relationship, so this formation is kinda rare. I hope this will turn out to be heartwarming and youthful as Reply series, or doing it in J-drama way. I'm always a big fan of J-drama's slice of life, because they do justice on said genre. Even overly slapstick drama like HanaKimi has strong messages in each arc.

Anyway it's also great thing this drama doesn't have well-known actor on its frontline. At least, we don't expect too much only to regret it later.

I was not interested in this drama anymore until I saw Kim Jinkyung's name! OH! MY GIRL CRUSH!

I'm sad to lose Jung Da Bin. But hoping this will be a R97 situation.

I really need to wrap my head around the brother sister paur. No birth secrets right? An actual drama about siblings?! Wow!

Can I just say though, I've felt threatened by people who are similar to me and might replace me but never to the extent of considering them a rival lol.