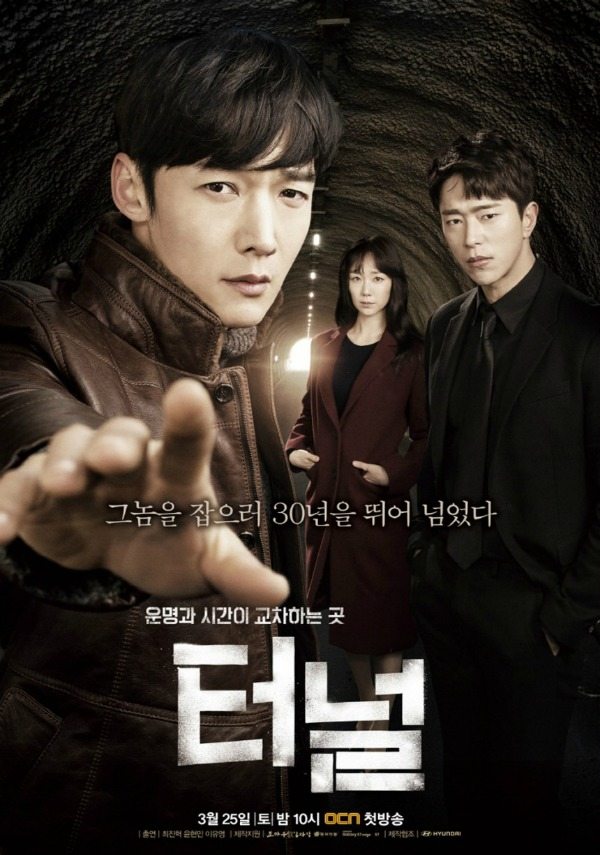 It’s analogue-meets-CSI in OCN’s newest crime thriller Tunnel, where 1980s detective Choi Jin-hyuk (Pride and Prejudice) travels to the present day via wormhole tunnel and clashes with prickly elite detective Yoon Hyun-min (Beautiful Mind). On the upside, they’re both good guys who are after the same killer, the mysterious culprit in a thirty-year string of serial murders.

Choi Jin-hyuk stars in the time-slip thriller as a dogged cop who runs into a tunnel while chasing a serial killer in 1986. He has no idea why, but he comes out of the tunnel and it’s 2017. The serial killings have continued for the last thirty years, and he joins an investigation team in the present to solve the case.

Yoon Hyun-min plays his opposite in every way: Choi Jin-hyuk’s character goes with his gut instincts and street smarts, while Yoon Hyun-min’s character believes in hard scientific facts and relies on advanced technology. Rounding out the main team is Lee Yoo-young (Yourself and Yours), a criminal psychology professor with an icy demeanor who’s a little obsessed with the psychology of killers.

The show’s official posters have been released, featuring the trio in the time-slip tunnel with the tagline: “I skipped over thirty years to catch him.” Choi Jin-hyuk’s character poster reads: “Even if you’re fooled a hundred times, a detective goes again! I’ll go alone if I need to!!” Yoon Hyun-min’s says: “Don’t apologize to me. Just suffer from now on.” Lee Yoo-young’s tagline is a bit creepier: “If a killer can’t kill… is there worth in his/her existence? Or not?”

The latest teaser also highlights how different our three leading characters are, as they pursue the same case together. Choi Jin-hyuk writes things out with pen and paper, while Yoon Hyun-min uses satellite photos to determine the distance between the crime scene and the suspect’s home.

When encountering a piece of evidence, Choi Jin-hyuk’s first instinct is to taste it (ew), while Yoon Hyun-min asks if he’s run a DNA test to get genetic [yoojeonja] evidence. Choi Jin-hyuk: “DN-what? Why are we talking about teapots [joojeonja]? Did you steal teapots too?” Pfft. Lee Yoo-young then brings it back to crime-thriller territory and asks the suspect, “When you killed… how did it feel?” Here’s hoping the show maintains that same comedy-thriller balance, because bickering old/new buddy cops could be a hoot. 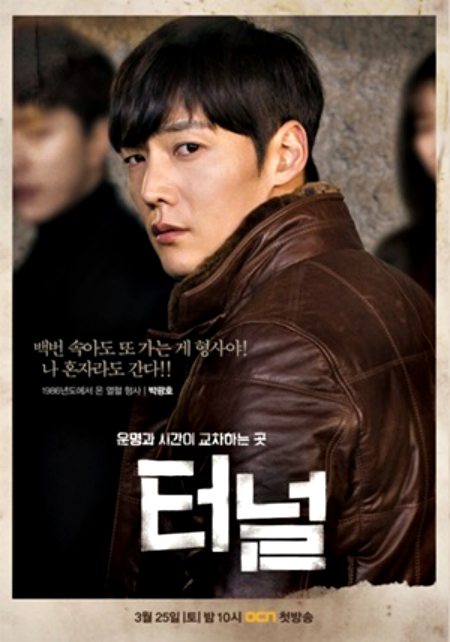 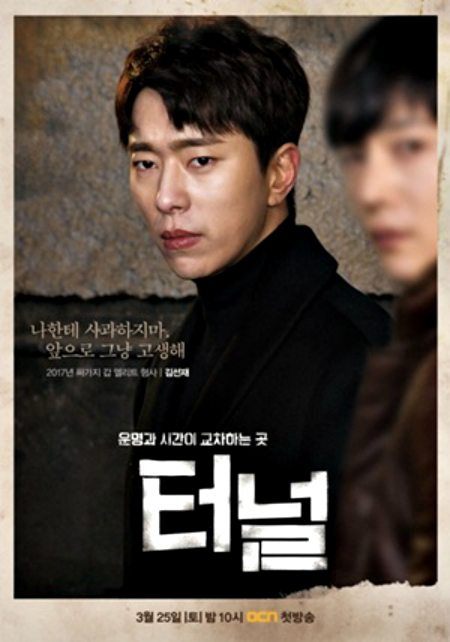 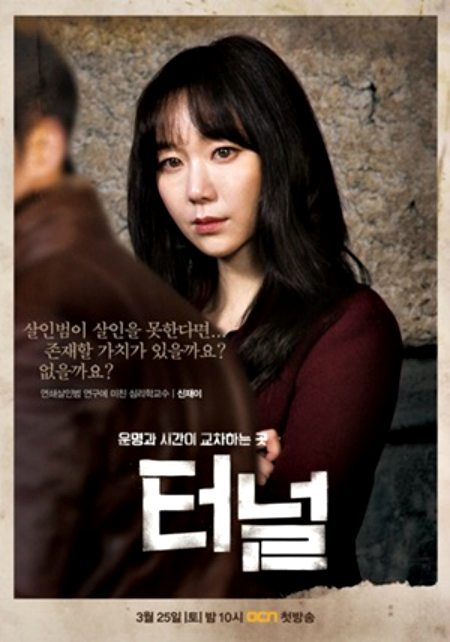 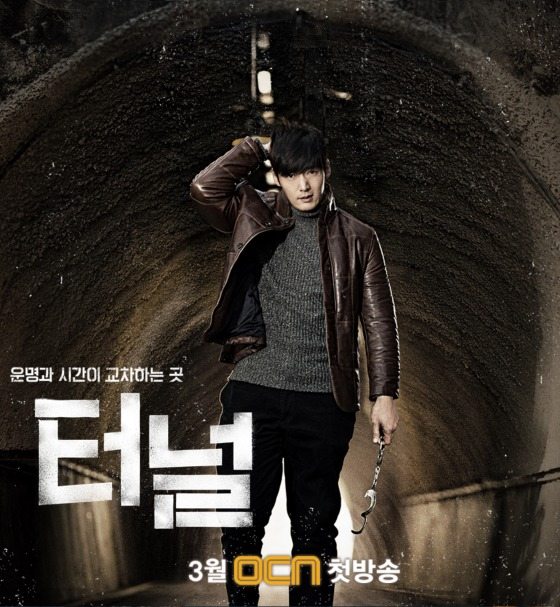 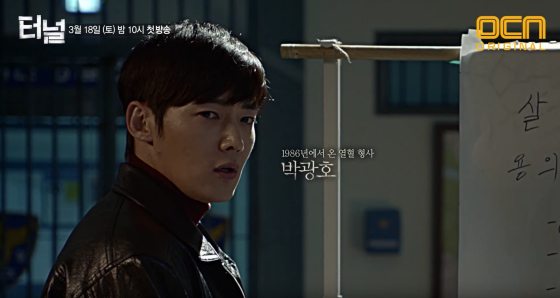 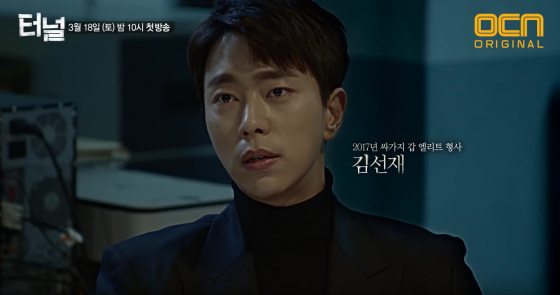 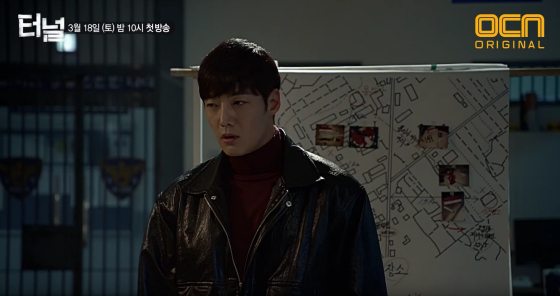 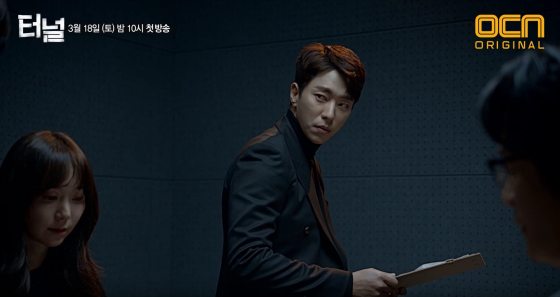 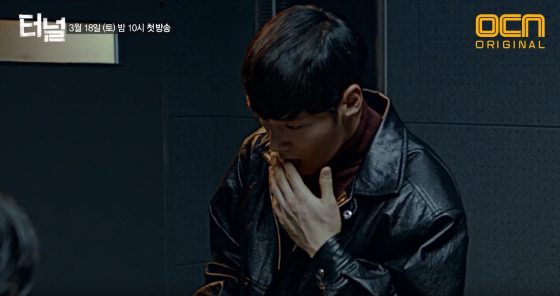 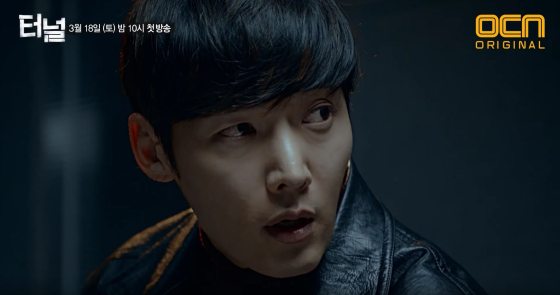 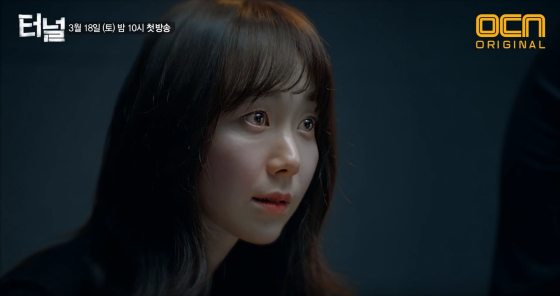 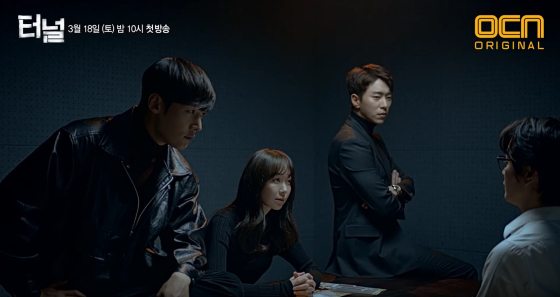 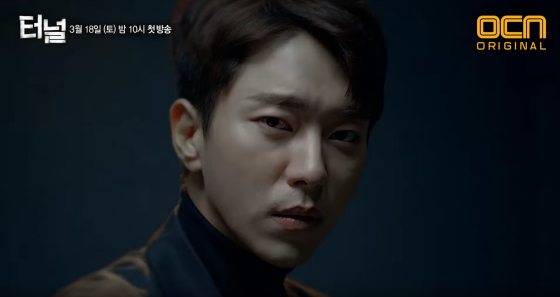 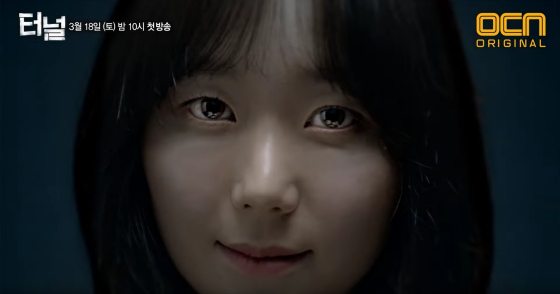 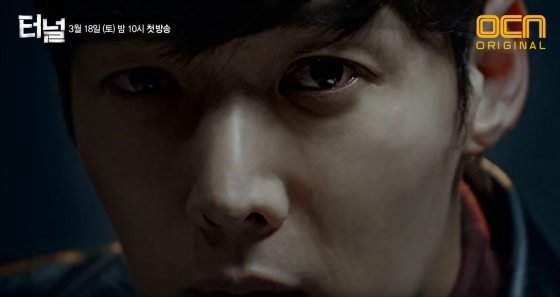 I wasn't paying too much attention to this, but I actually really liked the teaser. The three leads seem great. I'm already digging the buddy cop feel, but I'm digging this even more:

"Rounding out the main team is Lee Yoo-young (Yourself and Yours), a criminal psychology professor with an icy demeanor who’s a little obsessed with the psychology of killers."

Definitely looking forward to this kind of female character!

Lee Yoo Young's character sounds like the male version of Lee Hyun from I Remember You.
Super excited for this drama. Fingers crossed that Choi Jin Hyuk breaks the military comeback drama jinx like Song Joong Ki did. I don't really care for a "blockbuster" but a good story line and execution would be awesome.

Choi Jin Hyuk looks like he's wearing amour underneath his clothes and jeans in that tunnel pic.

3 gadis is camping on the cells village

Seems like we don't need to worry on the acting front. Hopefully the writer could do justice to this interesting premise. She only wrote 1 drama special before, and while it's a great drama, I was just get burned by another drama special writer. Crossing fingers this one will be good.

Personaly i like the graphics in Voice, i find the show more interesting that way because we're not used to this kind of graphics in dramaland, i was afraid after reading about the censorship of the show but i am glad they changed to 19+ratings, although it might be only for episode 11-12.

the ratings must be more so due the gravity of the theme but not much on the graphic visuals.

the violence are delivered in a way that is either "quick" or suggestive — blood splattering, silhouettes, general views that zooms to a specific detail…

and honestly, these visuals are to be expected since the series revolves around the hotline group and the violent crime unit — their interaction and how they solve crimes…

same. i love the graphics. i watch dark things to make me feel sick whether it's i-saw-the-devil-sick or oldboy-kind-of-sick, and this one does exactly that

I can't believe what I'm reading, you gave up watching a really good drama cause u found the "blurred" graphics appalling? I nvr comment on here I'm a silent reader but I had to comment cause I can't wrap my head around the fact that you decided to watch a detective/crime/thriller that of course will have murder in it and psychopath serial killer mutilating bodies because...that's what killers do. A drama that's trying to keep it as realistic as possible their not relishing in showing mutilating bodies they are sticking to the realism of what alot of cops/detectives have seen (probably even worse) cause these kind of things happen in our world this isn't make believe (besides for the plot line). As I'm finishing ranting I'm feeling apologetic cause I should be understanding of someones opinion and it could be that i'm real sensitive cause I'm attached to this show, but maybe crime/thriller dramas aren't for you? Peace&Blessings

I agree - there's a trend to up the violence , abuse and death to add tragedy, when it's all about the atmosphere you create, not necessarily what you show or indeed what you include. I tend to dislike serial killer dramas and books for this reason- it's an easy way to frame a crime drama. Let's kill off lots of woman in violent ways over and over. It becomes cheap and as you say, desensitives(SP? Sorry on cellphone) a serious topic. (Kinda like the only way for a character to have a tragic background is to feature these themes, which does discredit to the complexities of the human psyche. People can become messed up for a number of reasons, that may appear small in contrast to the world's issues, but that does not deter their pain. But I digress)

I agree with you about Strong Woman DBS, although I love thrillers but as you said i think the serial killer case there is out of place specially with his creepy mask, the drama supposed to be pure comedy I wonder why did they have to add this kind of plot. they could've chose another light crime like theft, if they wanted to put JS's detective character of use.

Must say I agree.

@La Plume. I agree as well. What brought me to kdrama was partly to escape the violent graphics of American/European shows. I can handle some serial killers with class (like Namgoong Min in Girl Who Sees Smells, *shivers*). I don't need to see them in every other show though, and I refuse to watch all the gore.

Have to say this is what is putting me off Strong Woman Do Bong Soon too. I understand it's morbid humour, but I feel sick watching it.

I don't mind the graphic violence in Voice, I feel the writing and directing is flawed at times - it misses that extra emotional impact that Signal was able to deliver. Oh man Signal really put the bar up for cop thrillers.

I think I'm going to enjoy Tunnel, the casting is perfect along with their brief character profile.

Looking forward to this one. All those Signal vibes.

Wah this looks great, kinda give Signal's vibe. Lee Yo Young is my another fav chungmuro girl, and glad to see she is doing her first drama ans her character seems intriguing too.

Looking forward to see, altthough I need to watch Voice first. How many epi left for Voice, anyone?

I'm definitely on board for this show...but doesn't something a little, um, *off* about the posters, especially the first one? The actors in the foreground don't match the background at all--like someone slapped this together in Photoshop while on their lunch break.

One name: Yoon Hyun Min!!! He is my new crush. I saw him on 'I live alone' and he is such a nice guy! Looking forward to this new drama!

Yay! I like him too. ^^ I first saw him in Heartless City.

I'm watching this drama for him and the plot. Really hoping this show turns out to be a good one. It must be under pressure since it will follow Voice.

Me too. I'm here for Yoon Hyun Min and the female character.

haha I noticed him more when he appeared as a homosexual in "The Good Wife", he was a scene stealer :) and so was his appearance on I live alone (practically cleaned his friend's room).

When encountering a piece of evidence, Choi Jin-hyuk’s first instinct is to taste it (ew), while Yoon Hyun-min asks if he’s run a DNA test

Ummm.... If you taste it first, then someone checks for DNA, guess who is going to look like the serial killer.

Every dormant medical instinct in me screams against this. The 80s weren't that savage.

Second, there was a rather fun US/Canadian TV show Due South in the 90's in which the Mountie also occasionally tasted the evidence to learn what it was or where it had been.

Hey! You might think the 80's were awful hair, but at least I had all mine then :)

I kind of wondered whether all those hair products actually damaged the hair leading to eventual hair loss unrelated to genetics.

Curious if Choi Jin Hyuk char won't meet his future self because he would still be alive in this time,that if he didn't die,no?

Just checked... Yep, still hype af for this drama. It's got CJH, it's got police procedural (where the cops hopefully aren't stupid and incompetent), and it's got a creepy genius-type female lead. Yes, yes, yes!

I feel like a lot of Kdramas seem to be becoming more like Jdramas. More shows with mystery as at least a component. Lots of shows that are heavy on the mystery and way lighter on the romance. Procedural format/storylines. Creepy vibes. All these things are staple Jdrama fare and basically what I used to love about Jdramas before they got stuck in a rut of unoriginal ideas and their production values were flushed down the toilet.

I'm not feeling Voice because I don't like the character archetype of the male lead but this, YES. Moar pls.

It kind of reminds me of the jdrama The Last Cop, except he was in a coma for the last 30 years. It's more comedy than drama. I'm so into this kind of old/new buddy cops dynamic. Lee Yoo-young's character sounds interesting. I would love a good anti-heroine.