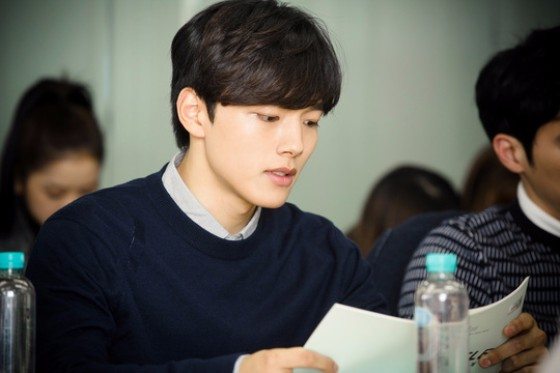 Mystery sci-fi drama Circle recently held its first script read, and the official broadcast date has been confirmed on tvN’s calendar for late May. The drama is divided into two parts that take place in different time streams, 2017 and 2037, and will be about aliens arriving from outer space and how that impacts survival on earth where strange things begin to happen.

In Part 1, 2017: Yeo Jin-gu (Jackpot) plays a character who becomes wrapped up in a case involving the aliens and a cheerful but enigmatic university student, played by Gong Seung-yeon (Introverted Boss). It seems the case isn’t fully resolved, because in Part 2: 2037, Kim Kang-woo (Goodbye Mr. Black) plays a police investigator who pursues the same case along with a city government worker, played by Lee Ki-kwang (Monster).

Maybe they’ll be working as part of a team, because Seo Hyun-chul (Oh My Geum-bi) and Kwon Hyuk-soo (Missing 9) have also been cast as police investigators. Other actors who were present at the script read include Ahn Woo-yeon (Strong Woman Do Bong-soon), who will play Yeo Jin-gu’s older twin brother (ha, I wonder if Park Bo-young will make a cameo as their long-lost triplet sister), and Han Sang-jin (Six Flying Dragons) as a college professor in 2017.

Looking at the script read photos, I felt positively ancient because Yeo Jin-gu looks so mature and I remember cooing at his adorable child acting during his Iljimae days. This drama looks promising because it has a great cast with the added novelty of aliens in dramaland (Do Min-joon doesn’t count—he was practically human), so I’m excited to see Yeo Jin-gu in something that may be worthy of his talents.

tvN’s Circle will premiere on May 22, following the end of The Liar and His Lover. 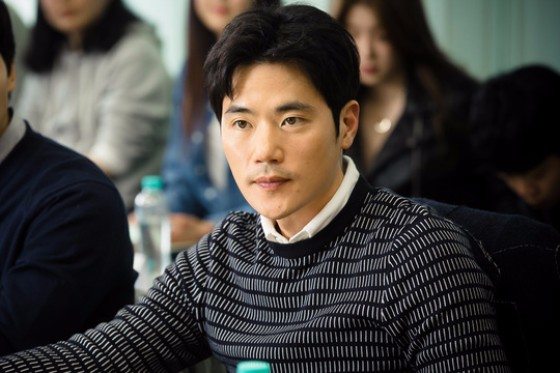 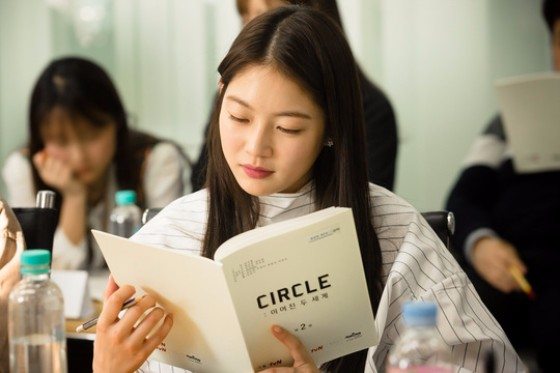 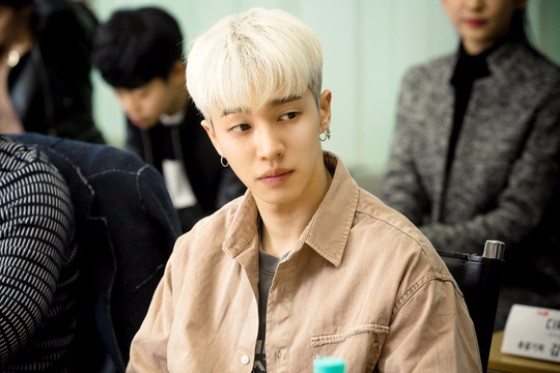 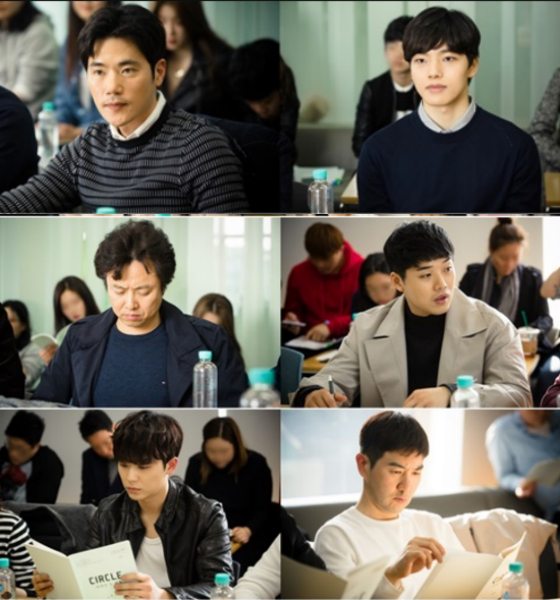 I don't know if its the photo or the lighting or something else , but I did not recognize Yeo jin-gu. He or they have completely bleached him. One of my favorite parts of him, was that he was darker. That makes me sad. That being said I'm excited for the show.

It could just be because it's still cold season in Korean.

Didn't notice his skin tone, but I DID noticed how much he's aged. He looks different, alright.

Anyways, what an overall great cast to such an interesting story! Can't wait to check it out.

He may have just lost a bit of his tan.

I think it's because he used to play outdoor sports a lot when he was younger so he got himself really tanned up back then. :)

maybe it's a part of his character/role?

His hands are the same color as his face. I don't think it's skin lightening. I think it's strong light exposure plus winter pallor combined.

This'll premiere on my birthday! It sounds interesting, but I'm always speculative when it comes to alien in TV shows, save for the Star Trek franchise and Doctor Who. But I'll give it a watch anyway.

I wonder why they didn't put this show in a Friday-Saturday time slot? I think it would do much better in terms of ratings

I wondered the same thing. It had excellent cast and producer behind it,plus the story feels like it belongs on a weekend schedule.

No matter, I will watch regardless.

Maybe they don't want to compete with jTBC Man to Man or this is strategy for Mon-Tues slot, which the rating is not doing well so far for this year

I don't think I'm the only one who has been patiently waiting for Yeo Jin-goo to play mature roles. I've been following his maturing process for the past four years and he's finally (almost) a grown-up now at 18-19 years old. I've thought from the very beginning that this talented and handsome young man is the absolute super star of the future. There's just something very old soul about him. His star is only beginning to rise. We all must fasten our seat belts!

I totally agree! There is just a sense of maturity in him especially with the way he takes on his roles, even from when he was just a kid. But at the same time, I love seeing him get playful when it comes to interviews. I hope this drama will have a good story.

He is always been mature for his age. His looks and mannerism.
He is blessed with top notch acting chops and a kickass voice to go with it. He is still very young but his reputation is that of a veteran actor.

Haha I remember watching him in The Moon Embraces the Sun which seems so recent, and wow do I feel old--which is kind of funny considering I'm the same age as him except a month and a couple days younger

I feel you tineybeanie. I saw him in Iljimae when he was just a wee little boy and have taken note of him eversince. He has grown into a fine young man and I feel ancient too.

It's crazy that I've watched all these child actors grow up on screen.

Not sure if I should include Yoo Seung Ho as he is a couple of years older but boy, I remember first seeing him in The Legend. I knew he would grow up to be juuuuuust fine.

Well, I might as well throw in Shim Eun Kyung who I also saw in The Legend and Nam Ji Hyun who I first saw in East of Eden but I remember my intro to her mainly in Queen Seon Suk. She left a great impression.

Nam Ji Hyun was 15 years old when she filmed QSD but she nailed it what a talented young girl, i wish to see her soon in another drama.

Yup. I meant throw her and Shim Eun Kyung in along with Yoo Seung Ho. The slightly older child star group. They were all around the same age when I first saw them on screen.

I've watched them all in sageuks and thanks to this genre I've seen some amazing acting from the very young to the most experienced veteran actors.

Since Ji Chang Wook still searching for his leading lady, please I want to see this girl as his partner!

Err. I don't want to say this as long as JCW doesn't find his leading lady, there is a possibility they will cast this one actress that I rather don't name her. lol. She is available so far this year.

Seems like Nam Jihyun is the latest leading lady for Ji Changwook this time.
http://entertain.naver.com/ranking/read?oid=108&aid=0002601707

Yes I just read about it too.

Shim Eun Kyung is rocking it in Chungmuro. She is currently the busiest child actor turns movie actor. I'm very happy for her.

OK, I'll watch this for yeo jin gu and Kim kang woo..esp the latter coz he is so manly..and older than me so my 'oppa'! Lol

Still far away but I'm excited to see my talented Yeo Jin-gu!

If aliens invading earth look like sexy Korean stars, I would be all for the invasion ?

I volunteer to be invaded lol.

Jingoo looks so good~ I'm so excited about this drama! Even if there are only gonna be 10 episodes, I hope they will be able to wrap up the story in that amount of time. Since there are only 10 eps, so it's most likely not gonna get draggy, but I hope it also won't feel hurried up at the same time.

I hope this is now Jingoo's time to shine. There is also his upcoming "The Proxy Soldiers" movie this June with Lee Jungjae~

And this just in... he's also reunited with Hwayi director Jang Joonhwan and his Hwayi dad Kim Yoonseok for the 1987 movie!!! T______T He's gonna play the late Park Jongchul, a college student who was tortured to death. :(

Hoping for more great things to come for this young man. He is so full of talents and has always remained so humble.

He is returning to Chungmuro after this drama to join the cast of "1987" so he needs to be free for that.
I'm super excited that he's be working with Hung Jung-woo and Kim Yun-seok! He'll be playing Park Jong-Chul whom the movie is based on.

I love it that he goes back and forth between dramas and films with great roles for his age.

I noticed all his projects recently were all related to CJ E&M. First that documentary he did with "Jingoo's Gift" for tvN Asia, then followed by him promoting tvN Movies, then a tv series with Circle, and now '1987' which is also produced by CJ E&M. I think they are making it up to him after that mess they did to him years ago.

Anyway the casting is so insane... and I'm so happy he's doing this movie! People are saying he's gonna have a hard time for this role because of the torture scenes... so I hope he will always be healthy and give us such an amazing acting~~

*Sigh* I wish we have an edit button. I meant Ha Jung-woo and yes that cast is full of amazing talents.

I couldn't think of any young actor who could do torture as believable as Yeo Jin-goo so I'm not worried. I never worry if he could play a certain role or not. He always deliver.

I've loved him since "Sad Movie," his debut project and it hasn't change. Proud fan for life lol.

He will totally deliver that's for sure... but I think people are worried instead about the difficult filming he will have to face instead of him being able to act it out. I think him acting a role is the last thing people will get concerned for when it comes to him.

That scene in "Shoot Me in the Heart" was already a short glimpse of him getting tortured. I'm sure our hearts are gonna break really hard in this movie. T_T

Me too! I first saw him in "Sad Movie" more than a decade ago, and well, it took me years to get into kdrama land so when I found out he's the same kid who was in Sad Movie I was very shocked and impressed at the same time.

I didn't even notice the typo.. I automatically read it as Ha Jungwoo xD

Oh geez, you look away for a minute and these young actors seemingly grow up overnight!

Finally I get to see him in a good project. He totally slays this noona's heart.

1000% agree. There is something very deep about Jin goo. He has a dignity and a quiet calm that hides a pool of emotion waiting to explode. He is going to slay all of our hearts when he gets into his twenties and leading man romantic roles.

Ohmy, that triplets connection would be the happiest cameo ever. And PBY would be excited since she's always wanted to act with him.

Agree. That cameo should be one of the best ones, lol. And they really need to act in a drama together.

Wow, I thought that was Taecyeon.

Question: Has there been an explanation to why the drama is called Circle? Is it to do with them "circling" around one issue in two different points of time?

IIRC, I think I read somewhere that since in 2037 there will be two worlds, "Smart Earth" and "General Earth", the circle is the one connecting those two... I already forgot the details though. ^_^; Also the full title is "Circle: The Two Connected Worlds"

I love it. Still not a fan of the plot.