Old friends reunite 80 years in the future in Chicago Typewriter 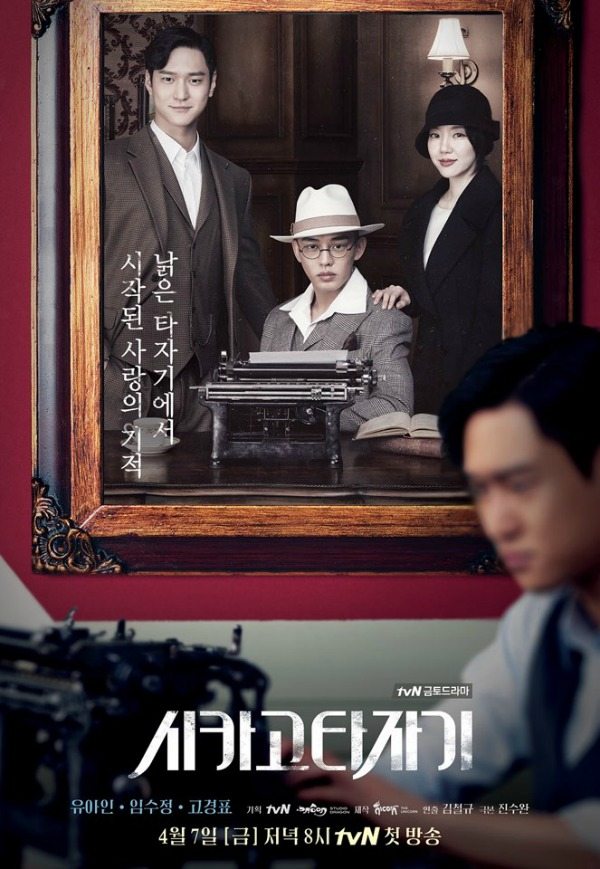 This first poster for tvN’s upcoming Friday-Saturday series Chicago Typewriter is a little eerie, but it certainly works to ignite my curiosity for the mysterious drama, which is about a trio of writers living through the Japanese Occupation who are then reincarnated in the present day and get re-entangled in each other’s lives. Coming from the writer of Kill Me, Heal Me and the director of On the Way to the Airport, I expect an intricate past-present mystery, some crazy characters, and gorgeous visuals.

Yoo Ah-in (Six Flying Dragons) stars as a famous novelist considered the Korean Stephen King, a sensitive, prickly diva who’s been called a genius since he debuted at the age of 21. A bad case of writer’s block threatens his career, and so he agrees to take on a ghostwriter. Im Soo-jung (Time Renegades) is a veterinarian who starts out as Yoo Ah-in’s biggest fan, only to somehow end up his biggest anti-fan. She seems a little nuts in the teasers, but then again, so does Yoo Ah-in. Go Kyung-pyo plays the ghostwriter who makes an unusual deal with Yoo Ah-in for the job.

We haven’t seen any other glimpses of the cast as the 1930s versions of their characters, but that’s what I’m dying to see more of. I want political intrigue, espionage, and tragic lovelines! And more hats! Hopefully the show will spend lots of time in the ’30s to make up for it. 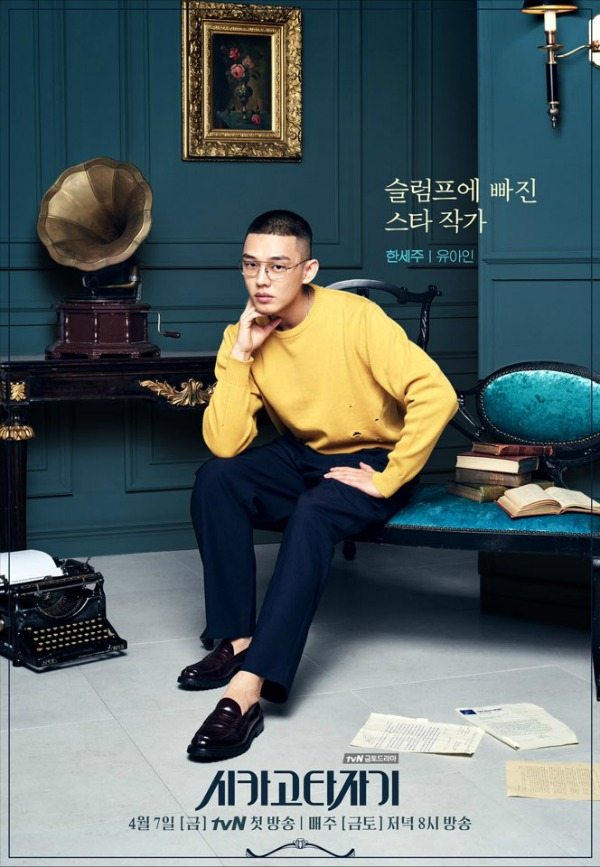 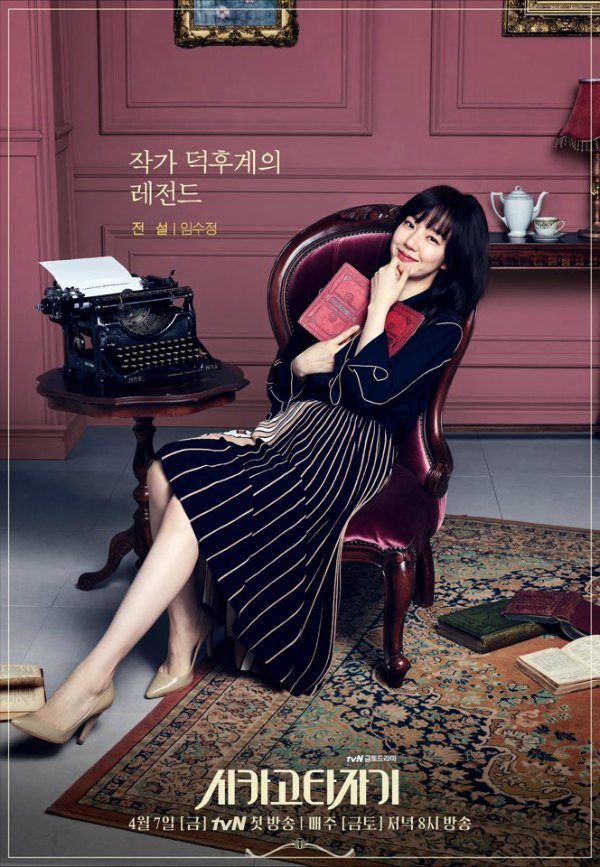 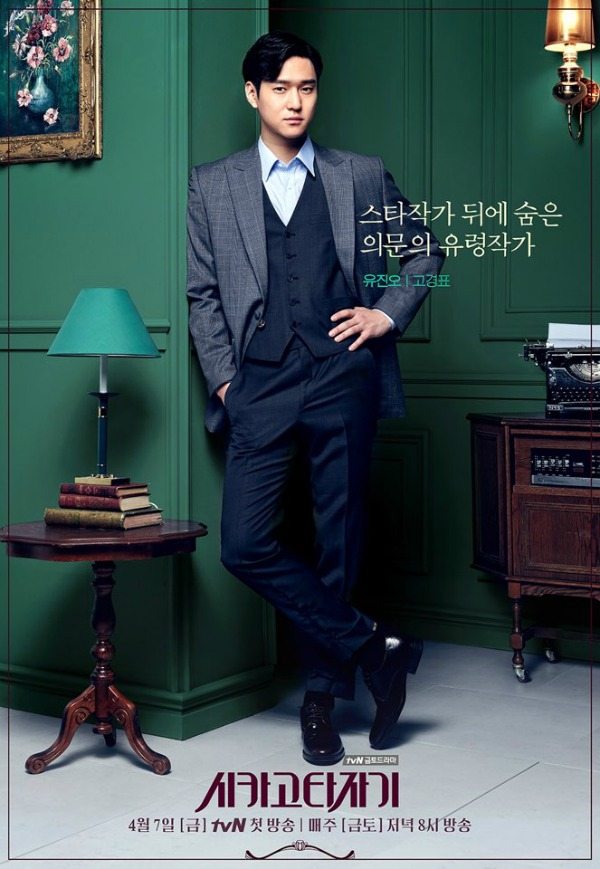 I love the posters, everyone is looking good.

I hope it will be good i have a high expectations for this.

So looking forward for this

I dunno what to expect from Im Soo Jung because i never watched any of her movies one that one drama with SJS that was like years ago.

I need my new drama craze after Goblin!

I don't want to set my expectation too high, but please drama be good. ???

Anyway I love these posters. On aside note, we need more period drama like Gaksital which set in during Japanese colonial era 1930s.

It's too late for me, my expectations are sky high!

Expectations have gone up for me. Pray hard indeed! I LOVE hats.

Gaksital was superb, but I remember it had 50s cars strolling around... not too accurate. But it's a minor point that only classic car nerds would notice (thanks dad for turning me into one). :P

Ah i miss this type of dramas like Gaksital,Capital Scandal aside that they look amazing in the costumes

5 gadis is camping on the cells village

I love the first poster. So gorgeous and unique. Hopefully the story will be just as unique and good.

In the first Poster , there's a pic of the trio dressed in the 30s and in the individual posters, YAI and ISJ dressed in modern attires while GKP still has the 30s way if dressing. Hmmmm...But it could mean nothing. maybe I'm reading too much to it.

But isn't that the best part? Speculating on what the show might be? It builds the anticipation!!!!

I agree with your observation of the outfit of GKP's ghostwriter character. His suit looks old-fashioned and so does his hairstyle - the 1930s incarnation had the same hairstyle. So maybe GKP's present day writer is not a reincarnation??

*screams* O:
Honestly, I feel like that's the type of twist the writer would do but also would it be so easy to figure out?

They're more like a trio of gangsters than a trio of writers. LOL
Since it will depict 1930s era and probably related to Japanese Occupation, I'm so excited as this era is rarely depicted in dramas.

Agree, it's such an interesting period in history, they could definitely use it more often! Although it is a bit sensitive too, I guess... I remember loving Capital Scandal many years ago, despite its flaws and quirkiness hehe. Hope this will be good!!

Exactly like I said above ? Or something like Giant which the period of drama started from 1970s. I miss this kind of drama.

The other day I watched The Handmaiden which was also set in the 1930s. Definitely want to see more of that period!

I know this show isn't going to go this dark, but everytime ghost writing is mentioned in context of film I automatically think of Polanski's film The Ghost Writer with Ewen McGregor. It would be great if it did have some of the dark thrillerie vibes for the 1930s scenes.

It would be great to have thriller parts like in Stephen King's novel since the writer is considered as his Korean counterpart. I just got the chills imagining it.

I'm kinda curious to see this, please dramagods let this be good...! Please...!!!

I'm sooo waiting for this one to air. Period drama is just my thing (can 1930 even be considered as period drama? Don't know, I kinda consider everything with costume from another era as one lol). Plus, a story about writer(s) and YAI, that's just ?? Hope it will not disappoint *fingers-crossed*

I hope the drama will show 1930s period scenes in good proportion since I really love the '20s-'30s style!

I really want this to be good! The poster is interesting and I'm loving YAI style. I've been in the biggest drama slump lately and need a show to love. I really hope it can be this one.

I haven't seen Im Soo Jung in a drama in forever - I've only seen her movies and that one drama with So Ji Sub. I'm excited for this!!

This looks so great; I'm really excited. I'm still not all too sure what it will be about but I like that actually.

I'm dropping the drama.. But I wish for the best.. I have high expectations for this drama bcz of Park shin hye rumoured to be the female lead. I thnk ths drama will daebak later. Good luck yoo Ah In!!