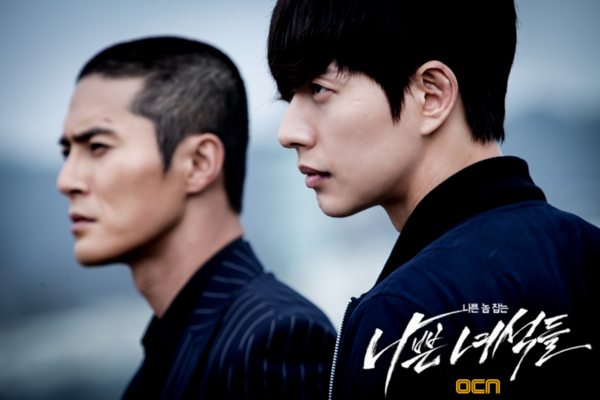 The highly anticipated second season of OCN’s hit ensemble crime drama Bad Guys has now officially begun production and planning, and is eyeing the September broadcast slot in OCN’s lineup this year, though the network says the timeslot is not confirmed. The sequel will be called Bad Guys: Age of Evil, and it’ll be helmed by writer Han Jung-hoon (Police Unit 38, Bad Guys, Vampire Prosecutor) and director Han Dong-hwa (Police Unit 38). The real question is whether the second season will be a true sequel or a spinoff with a new story altogether, and how many of the original bad guys, if any, will be returning for this installment.

Bad Guys aired in 2014 and was a marked success for the cable network that reached 4.1% ratings. The unconventional setup—morally gray cops using hardened criminals to catch even worse criminals—was a fresh spin on the usual crime procedural with a task force of good guys. It also became something of a signature for the writer, who went on to pen Police Unit 38, which I’d call Bad Guys’ kinder, gentler little brother who stuck to white collar crime and maybe didn’t become a serial killer like his bro.

As of yet producers haven’t announced whether they will be reuniting the original ensemble of bad guys: Park Hae-jin (Cheese in the Trap) as a psychopath serial killer, Ma Dong-seok (Police Unit 38) as a gangster, Jo Dong-hyuk (Rude Miss Young-ae 15) as a contract killer, Kim Sang-joong (Rebel: Thief Who Stole the People) as the detective who brings them all together, and Kang Ye-won (Baek-hee Has Returned) as a police inspector.

The second season will again be about a group of bad guys punishing the real bad guys—people who use their power to corrupt—and is described as an action noir that delivers a gratifying punch. It’ll feature more base evil in its villains, and a bigger scale overall. Some new characters include a prosecutor in his/her forties, a founding member of a gang, and a violent crimes detective. Yeah, but tell us what you’re doing to get Park Hae-jin and Ma Dong-seok to sign on! Let’s be clear about our priorities!

Bad Guys: Age of Evil has begun casting, and if all goes well, hopes to air following Tunnel, Duel (May), and Save Me (July) on OCN. 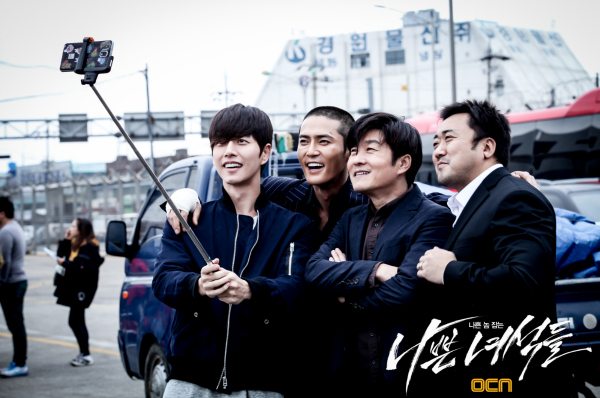 Via IS Plus, TV Daily

And I need Ma Donseok to return for this. I need him.

Yes to Han Jung Hoon returning to OCN! (Though Bad Guys was the only one of his works I haven't watch yet.) He can write all he wanted to, as he almost couldn't for his last work (M9) ?

he's the creator of M9 but he didn't write the script another writer did the screen writing.

I stills don't know why MBC don't let him write all series. They put a poor writer instead.

Park Hae-jin would more accurately be described as an innocent young man framed to look like a psychopathic serial killer.

They probably didn't want to spoil the big twist of the first season here.

I need all the crazy dogs troops again~ same writer, i'm sure it'll be good if not the same team again. But i would love the same cast yes!

I feel ya. Literally, any time a drama announces a season 2, my reaction is exactly, "What about Liar Game?!"

Now I know how you Vampire Prosecutor fans feel!

I'm still holding out for another season. If i believe enough, it WILL happen :'(

Kim Sang-joong and Ma Dong-seok must return for me to watch it.

Agreed. It's Kim Sang Joong who made Bad Guys for me.

Completely agree. There cannot be another Bad Guys without Kim Sang Joong. Although the entire cast was amazing, KSJ is the one who carried the drama on his shoulders. Fingers crossed!!

A big yes, although I also hope other casts return too. And can they change Kang Ye Won to someone else? Maybe Han Chae Ah.

I agree. Need KSJ and MDS in this second season!

And KYW was the weakest character/actress. Hope this drama has a strong, well-written female character this time.

Seeing KSJ in this role was an eye-opener for me (prior, had only seen him in comedic roles).

As stated before, don't know why Jo Dong-hyuk isn't a major star (has the looks, charisma and acting chops).

Would like to see the entire cast back (except for maybe KYW).

ManXMan is preproduced I heard. And not sure how far along CITT movie is into filming so the big question is can Park Hae Jin be down for this? He has been filming so much back to back but after a short break I would looooooove to see him and the rest of the original cast back for this in the latter half of the year

I'm starting a prayer circle, who wants in?

Me!!! I want the original cast too!

Please drama gods give the production staff all the power and resource to secure the original cast. Cos it ain't Bad Guys if it's not the for 'em originals.

How's Park Hae-jin going to reprise Lee Jung-moon if he does return? A criminal profiler recruited by the police? A psychological professor like Lee Yoo young from Tunnel? Or a innocent-turned-guilty killer again? To be honest, it would be too cruel to throw him behind bars after everything he's gone through. But, I NEED THE ORIGNAL CAST

I don't care what insane plot they come up with to justify his presence - as long as he is on my screen!

Ha! i am with you! I can get into the criminal profiler thing, but I need Park Hae Jin to be in this!

hahahaha
me too~
he can be the guy who is selling tofu at the prison gate or whatever, I'll just need him as Lee Jung Moon

11 gadis | clawing my way back after the longest drama slump

Joining the praying circle that it will return with all the original bad guys.

Time for party!
Time for cheer!
The bad guys are finally here!!
???

I don't know. This is why I like Korean drama. It doesn't go on and on into years and decades. Two seasons most of the time is all you get from me on American television now. A Korean cop show, I don't know if I can sustain interest. I'll try this one if it comes out during a dry spell in dramas. Otherwise happy viewing.

Hope that it won't end up like Mrs Cop 2 whereby they changed the entire lead cast !!

I just want to see all of the Bad Guys Team once again please !!

Wow.. I never realized I watched this drama 3 years ago.. So, it took 3 years of waiting for season 2, I hope they will bring back the original casts
And I will never lose my hope for squad 38 and signal's season 2.. 3 years, right? ??

[email protected]$K YEA!!! FINALLY A SEASON 2 OF SOMETHING

*SCREAMS* CAN. NOT. WAIT. Bad Guys is def in my top 5 favorite dramas of all time. Don't fail me, sequel *crosses fingers*

I completely agree!! I totally thought Kim Sang-joong overacted in Bad Guys, but, he was amazing in Rebel (I am currently watching this great show, you should be too). I also thought the female detective was a little flat. They could replace all the cops as long as the bad guys stay the same. After all Bad Guys isn't Bad Guys without the bad guys. Hahaha

Seconding about the female detective. And I can't stand her voice, her scenes always spoiled my watching experience.

Omgggg yes yes yesss . Trying to write a clever remark but this is the most i can do

Maybe so if the original cast returns!

This is one of those shows I'm a lot less concerned with the original cast returning for. While I absolutely loved everyone in the original, their stories were also all fairly well told, and I wouldn't want them to suddenly go south or get played with for the sake of a sequel. It would be a bit odd to not have the same detective either, since he was really central to the team's creation, but I suppose they could pass it off as "the idea inspired another precinct to do the same." Mostly, I'm just excited for this, since it's by the same writer... even though the directorial style made a lot of the show and I'm sad not to see his name here.

Bring back the original squad, please. You can add new face but don't take out any of the guys in season 1.
Still can't believe myself though. Am I dreaming? ???

I'm seriously so excited about this! I can't wait for a second season!

Park Hee Jin was a serial killer in Bad Guys? How come I've never heard of this drama? What did I do in 2014 to have missed this drama?

It's the season of crime drama!

OCN solid crime dramas. Not soft, but solid. Bad Guys one of the most hardcore ones. I remember the scene they went into a room full of blood-bath bodies. Wahahaha! Haunted me lol!

Whoaaaaaaaaaah. I remembered I followed this drama weekly. I was crazy over this drama, esp. because of Kim Sang-joong. But the ensemble - Ma Dong-suk, Jo Dong-hyuk, Park Hae-jin, - solid BAD GUYS. I mean really bad and mean.

YES!!!!
Bring back the original bad guys esp the lovesick hired killer..I don't liked what he did to that woman's husband but gosh, I love him! In that drama I loved him more than park hae jin!

I'm so excited for this I almost shrieked inside public transpo. Park Hae Jin! *runs off to watch CiTT and Bad Guys 1

Only if Seo In Guk oppa was around..I could've wished Park Woong-chul bring Jung do along with him!!

I think Bad Guys season 1 is the best action drama.. if they want to make another season without the formerly actors, i just think that will be a big mistake. It's fine If they want make another storyline, but i think there must be correlated with the first season or involved the 5 main characters..