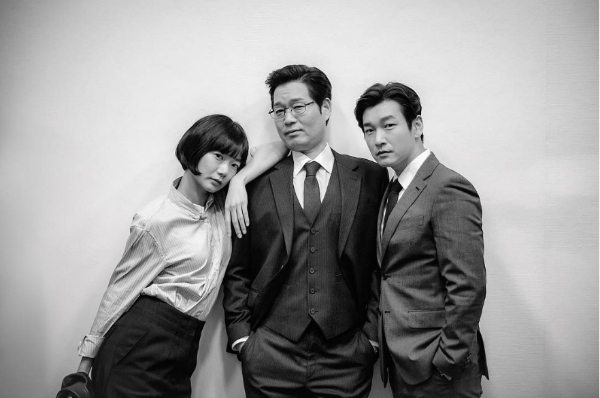 We have first script reads and behind-the-scenes images for tvN’s upcoming drama Forest of Secrets, starring Bae Doo-na (Tunnel, Sense8) and Jo Seung-woo (Inside Men, God’s Gift–14 Days). Forest of Secrets is the story of a lonely prosecutor who is paired with a righteous detective to reveal the truth behind a murder case. Bring on the problem-solving!

Jo Seung-woo plays Hwang Shi-mok, a clinically emotionless prosecutor who only looks at the world with reason. He faces the reality of widespread corruption inside his prosecutors department when a series of murders becomes difficult to solve. It will be interesting to see Jo Seung-woo act with no emotion without looking stiff, a tall order for any actor. Or maybe in this case, looking stiff is the name of the game.

Bae Doo-na plays Han Yeo-jin, a non-negotiating, stubborn, but warm-hearted homicide detective. Bae hopes to show a fresh image to viewers by bringing energy and enthusiasm to her portrayal of a homicide detective. At first glance, it might not seem like energetic + charming + enthusiastic = homicide detective, but if done well it could work. I’m thinking of Jang Nara’s character in I Remember You, who balanced passion for her job with abundant charm and energy. 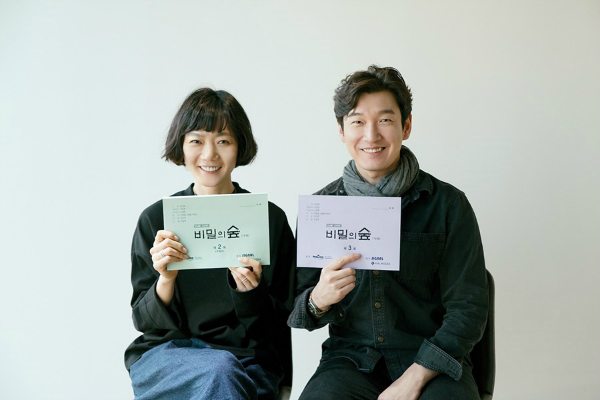 The script read was held at CJ E&M in Sangam-dong, Seoul. The images boast a fun and playful atmosphere despite the serious mood of the drama. At the script reading, the director, Ahn Gil-ho, assured everyone that he will do his best to make sure that both Lee Soo-yeon’s script and the passion of the actors are covered well. He will have to be on his toes though, because Forest of Secrets is drawing high interest as the comeback dramas for both Jo Seung-woo and Bae Doo-na. Jo Seung-woo’s last drama was three years ago with God’s Gift–14 Days. Bae Doo-na has not acted in a Korean drama for seven years since weekend drama Gloria, though she has been busy with the action series Sense8 on Netflix.

Bae Doo-na also posted a couple behind-the-scenes images of Forest of Secrets via her Instagram page (the photos in black in white). Maybe it’s the grayscale, or the swagger, but they certainly bring an added cool factor to the proceedings.

Forest of Secrets will air on Fri-Sat in June following Chicago Typewriter. 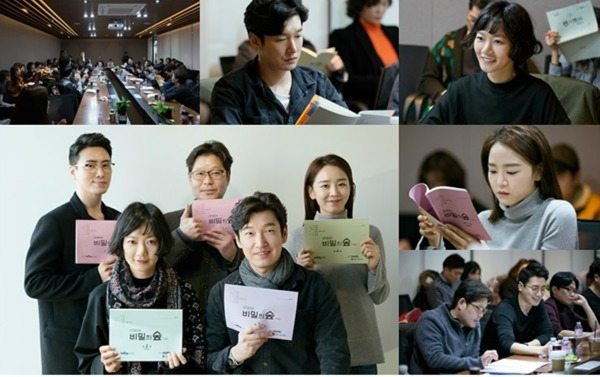 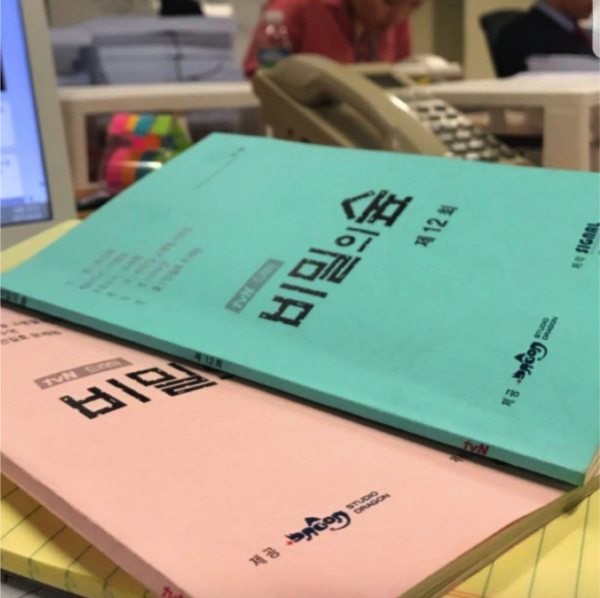 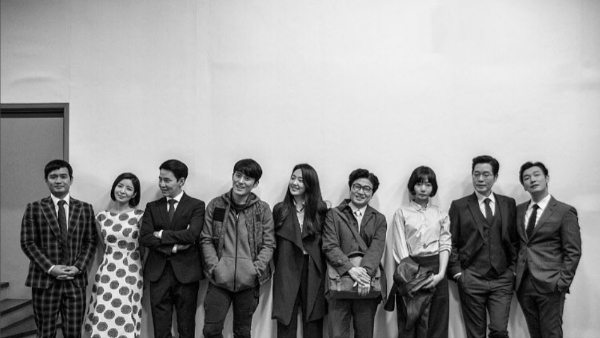 Finally news about this drama I almost forgot about it, looking forward to it.

Is the actor in the middle with glasses Do Bong Soon's father?

I was wondering the same thing and after seeing the second pic, I've concluded that YES, it's Bong Bong's dad! He looks so good here!

Yeah he looks neat, seems like he plays main role in here.

Looks like it! I can already see him do a 180 from his current role as Bong-soon's dad.

Yes. And also the same actor who was bodyguard to Park Hyung-shik's King JinHeung character in Hwarang. :)

Thank you so much for the article, Buhdoop. This is my most anticipated Kdrama for the year so far, (followed by Duel with Jung Jae Young, and Criminal Minds with Lee Joon Gi and Moon Chae-Won). Sadly - I do not see much promotions for this (and the other 2 drama), and no sign from Viki or DramaFever that they are prepared to offer it. May I request that anyone with interest in the drama to submit title request forms to both Viki and DramaFever? Thank you in advance.
https://vikiinc.wufoo.com/forms/title-request-form/
https://docs.google.com/forms/d/e/1FAIpQLScuXiW1XwtSRt0H_ehdDMABJYJNQWA1xj78ni06l4m_OG-ZHg/viewform

Uh, I didn't write this post, Buhdoop did! Why is the site stealing her credit???

oh how can? the site did steal Buhdoop's credit? I've just heard about this kkk

Has this been happening on recaps? Most of the ones I've visited have had the right name...

In "Recent posts" we can see that Buhdoop has written this post, but when we open the article it says "by javabeans"... how crazy! ?

The same thing is happening with the recent Hyun Bin article! When you see it on the side of the page it says tineybeanie wrote it but when you open it it says "by javabeans"... what's going on LOL

IT'S MADNESS! (For the curious, right now the bug is displaying whoever edited the post last, in case you'd like to know that bit of useless knowledge!)

Oh no, the glitch goblin strikes again! (Did anyone see him? Does he look like Gong Yoo?)

Lol. He better, after causing you this much trouble!

if he does, have fun catching him! So Jealous!

So good to see Jo Seung-woo back! It's much harder to find his work on stage than his films and dramas.
Bae Doo-na <3.

- Is that Bong-soon's dad!? Answering my question after seeing the second pic of him--yes, that's Bong Bong's dad looking dapper af!
- I've only seen Bae Doo-na in the Korean movie "As One" with Ha Ji-won and I loved it. I was super intrigued in Sense8, too, but still haven't checked it out. Side note: has her nose always looked like that?
- I can't believe God's Gift was three years ago!?
- LOVE the cool vibes from the b&w photos so much!

I'm scarexcited. It's that feeling when you want it to be good and want to believe it will be good given the persons on board, but you also know how hard Dramaland can fail regardless of the available talent.

So true. There is a lot of talents in Dramaland. It's the material that they are given to work with that is lacking.

so many dramas about a detective, murder, and crime-related this year. I'm not complaining though :p. Oh, and I haven't seen Bae Doo Na and Jo Seung Woo's work *please don't nag me xD*. Anyway, please be good!

Jo Seung-woo, why so hot? <3 Love that smouldering gaze in the first photo.

The plot doesn't interest me at all but come on... these actors?! How can I NOT watch?!

I still have no idea what this drama is about but with these two im def onboard. Im really curious of the script. I mean they got Bae Doona and Jo Seungwoo to join. That must mean something, right?

Im excited and I hope itll be good but at least were assured good performance from the cast. Thats one trifecta covered :)

I'm choosing to believe it means something.

It HAS to mean something. I suspect at least the first few scripts the actors might have read were very promising and that's why they signed on. But yes, we are assured good acting from the cast. Even if the writing doesn't turn out stellar, the actors could really turn it around and make it better than it really is. Buuuuuut, I of course hope the writing is awesome so the whole operation kicks butt!

I love this cast so much it's ridiculous. I desperately need this show to be good. Jo Seung Woo's character description doesn't exactly excite me, but that's simply because he has a warmth to him that I'll be sad to see subdued. Still, I'll be interested to see what he can do with the emotionless character. Since the plot description leaves us in the dark about what kind of murder it will be, it's hard to know what to expect with this one. I love that title though.

For just the actors alone I'm willing to give this drama a try.

I'm still excited for this, but I have to admit that my enthusiasm went down a little bit reading the character descriptions. I know I can't be the only one that's tired of the "cold, emotionless man" and "bleeding heart leading lady" shtick. Especially, when the plot involves "fixing" whatever condition he's supposed to have. Men in dramaland are already normally emotionally stunted as it is. Do we really need to add extravagant brain injuries and medical mishaps in the mix? It's hard for me to believe in any motivation a character might have when he's not supposed to feel anything.

I'm really excited for this drama. Jo Seung-woo and Bae Doo-na combo!! And is that Yoo Jae-myung? My ajuhssi crush come back to dramaland so soon. It would be interesting to see him doing a 180 after his meek appearance in Do Bong-soon.

Ahhhhh! I'm so excitedddd. Can't wait to see teaser vids and posters and really get the tone of the show.

So excited to see Jo Seung-woo and Bae Doo-na in a drama! Although I'm a bit worried and slightly disappointed that Jo Seung-woo will play an emotion-less guy because he's so good at emoting. But now it makes me more curious how he'll approach the role. The unfortunate thing for me is that I haven't been into dramas lately, though my love for Jo Seung-woo has yet to detter me from any project, no matter how thick the thriller is (except for Horse Doctor, because it was too painfully long).

The title reminded me of the Japanese drama "Secret Forest", and I got all excited for a moment thinking this was a remake. Judging by the plot, though, it seems the similar title is just a coincidence.

Too bad... I really loved Secret Forest - I found it unique and disturbing in the best way (it's about a woman whose family was murdered when she was a child; she witnessed the murder but has repressed the memory, which means even she isn't sure whether she herself was the killer).

This seems more standard by comparison, although admittedly it's hard to tell from the standard description. Oh well. I'm sure once I get over my disappointment, I will be more interested!

I was wrong! The Japanese drama is called Nemureru Mori - Sleeping Forest. Silly me! :-)

Honestly, now that you mention it, I think my mind has subconsciously decided that this will be equally thrilling because of the title similarity. Lol, probably not a good idea to get my hopes up. I just wish the description gave a little more to get us interested in the murder case.

It would be extremely cool if the similar title could ensure a similarly remarkable drama. :-) I honestly don't think I've ever seen another drama like it. And yes, we can really only guess at this non-Sleeping-Forest drama's tone and plot as of now...

So excited to see Shin Hye Sun in something since Five Enough! I don't think I've seen anything korean with Bae Doona in it, only the English movie Cloud Atlas. Excited to see how this one turns out!

I'm so excited to watch Bae Doona in a K-drama. I realllllly love her character in Sense 8.

Still praying so hard for this show, because Bae Doona-Jo Seung Woo combo! But then, I may watch throughout whole show no matter how the plot goes.

Bae Doona looks so badass in that first image~♥♥♥

been a silent reader,, and this is my first comment...
woohooo, jo seung woo... my Captain Awesome ...

I am more excited to see Bae Doo-na in Sense8 second season in May on Netflix.

Just praying that the plot will be good, since it doesn't look like we have to be worried about the acting.

Absolutely love the cast, hope the script is as good too!
Waiting patiently for this one...

Oh my word I love Bae Doo Na!!! Am looking forward to this. .... question, is this entirely pre-produced?

I'm still not over God's Gift ending so this better be nice.

Why does Bae Doo-na look so hot in every single photo I see? She just has this like smouldering... Thing going on. Maybe it's just me.