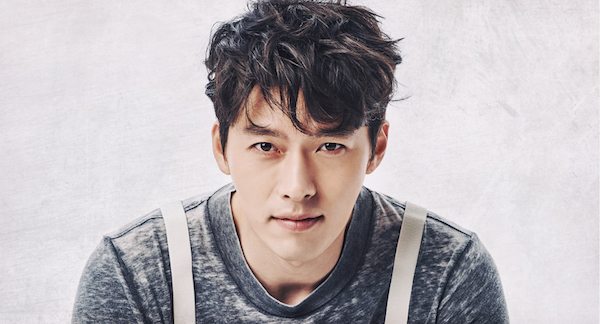 After the success of his latest film Confidential Assignment, it’s no wonder that Hyun Bin is opting to stay in the movie business for now (his last drama was 2015’s Hyde, Jekyll, Me). He recently confirmed to star in a new action zombie movie called Rampant, which is set to start filming later this year.

Rampant tells the action story of a hero named Yi Chung (to be played by Hyun Bin) who fights against “Night Demons” to save the Joseon nation. Yi Chung is the son of the king, and the greatest martial artist in the world. Although he is given to the Qing Empire as a political hostage, he returns home when his brother, the Crown Prince Yi Young, calls him back after many years. And it’s because of the nightmarish monsters plaguing the country that Yi Chung is tasked to destroy.

This will be a reunion project for Hyun Bin with Director Kim Sung-hoon, whom he worked with before in his most recent movie Confidential Assignment. But although the action element may still be there, the story, genre, and style looks like it’s going to be completely different. Next Entertainment World (NEW) which has been the driving investing force behind blockbusters like Pandora and Train to Busan is also going to be Rampant’s primary backer.

I wonder if this is going to be a continuing trend—mixing CGI supernatural fantasy with sageuks. There’s been Records of a Night Watchman, Scholar Who Walks the Night, and upcoming zombie sageuk Kingdom. I really like the concept, but the execution so far hasn’t been too stellar. Hopefully, the successful dynamic duo Hyun Bin and Director Kim will be able to pull it off.

Epic action film Rampant will begin filming at the end of this year.

zombie sageuk? count me in!

I doubt that it's gonna be stellar though XD But even if this movie had 100$ budget I'd watch it, zombies are totally my guilty pleasure and mixed with sageuk on top of that? my god

I know! How has it not been done before? Zombies, sageuk and Hyun Bin? So. Damn. Excited.

Yes! This film is sounding better by the minute :)

But that won't be enough to cover the sparkly sequined hanbok!

I can see it all now: The zombie hunter hangs out at an eatery operated by a tough cookie named Sam-soon...

Me too!
Hyun Bin + sageuk +zombie ! this will be one in million movie.

I'm not into zombie concepts but it's sageuk and Hyun Bin!

those dimples <3 ! and in hanbok!
although i doubt he'll have much cause to smile, because yikes! zombies

You never know. He's going to have to slay those zombies somehow. And what better way than with the most killer dimples ever?

like a 'secret weapon' ?! This movie totally needs to be made XP

zombie sageuks come in abundance! but I still expect good acting from the zombies- no hiding behind: "But I am falling apart and I don´t have a brain!" excuse

I almost spit my drink on my laptop!!!!!

Man, redfox, you are merciless! LMAO!

But I love your dedication to high quality standards. ;-)

Honestly, we get TWO Zombie Sageuk themed things now? It's like the gods really took our comments way back then seriously...

and one more thing: how exactly does Hyun Bin fight the zombies? Do some crunches and stare them intently in the eye?

if he´s gonna chop them up, they better strip first, no need to ruin a perfectly good hanbok.

They should be naked...there's something about naked zombies, compared to the clothed ones. I watched I Am Legend with Will Smith and there was something so moving about the fact that they were unclothed, it touched me that they had been reduced to that state, that they were once humans. But all the other zombie flicks I saw have had clothed zombies - Walking Dead, Train to Busan, World War Z...hm, can't remember whether they were clothed or not. I like zombie movies, the ones I've watched have always been pretty good, and touched me in ways non-zombie flicks didn't.

in Train to Busan they all wore well-fitted clothes. a few of the soldier-zombies even wore their uniform hats

Zombie Sageuk?!!!! Bless up!!!! This is fixing up to be what the Great Wall should have been. Give me Rampant to wipe out the taste of that hot mess!

Now I just spit drink out!

When i first read the article I didn't notice film, I directly thought of Kingdom for Signal writer I thought he waa casted in her drama..... waiting patiently for the casting for that drama.

Okay, so *where* do I go to watch these movies? My only source in the U.S. has been Netflix (spotty availability at best). Does Viki ever have them?

I feel your pain! And suffer with you...
Yes, Viki and Dramafever both with have movies but they're usually delayed. I think I waited a year for Beauty Inside and probably about the same for Train to Busan. There are other sites available, too if you search.

Thank you! I do some light searching from time to time, but I've also landed on some sketchy sites doing that, so it's good to know they will eventually come to more trusted places.

I have gotten used to Dramacool but it can be a challenge... I feel like Indiana Jones tiptoeing through all the (adverts) traps!

Not a fan of zombies.... but... I am happy that the industry is playing and experimenting with other genres. I hope it delivers and maybe someday we can have Lee Jun Ki in the korean adaptation of The Walking Dead.

Isn't W's or was it signal writer or wait some drama that did well in 2016, its writer also writing a saguek zombie drama for her next

I prefer to watch this kind of experiment on the big screen. If it's bad, at least it'd be over in one go.

This film isn't going to be able to escape comparisons with Kingdom, even though the latter is a Netflix show and not a movie. It'll be interesting to see how they differ.

Pulling a Gong Yoo? Staying in the movie business for a while, playing in a movie with zombies and then an awesome comeback in dramaland? Lol

Not a big fan of zombies, but I loved TRAIN TO BUSAN. So maybe for me they have to be Kzombies with sympathetic character development and heroic arcs or -- epic sageuk bromance. But doggone, it's Joseon, so we'll have zombie gats! Please, someone give me a Three Kingdoms zombie mane of glory, pretty please! ;-)

Whew! Now that that's out of my system, I'm looking forward to this. Hwaiting, Hyun-Bin!

Joseon Zombie Hairdresser - mains of glory, that are perhaps not so fresh.

I bet he'll get bitten in the end. I don't have a good feeling about this, I'm telling ya.

I love Binnie ❤
Now that has been established, I can't wait to watch this movie ?

Also can he have a reunion drama of him and Ha Ji Won! I would love to see them together again on big or small screen ?

I collated this with the Netflix series 'Kingdom' without even realising. Why must everything in k-ent circles travel in pairs or triplets. But still, Hyun Bin!

He is still so handsome. Miss him, hope he does a drama soon

Hyun Bin is great in Confidential Assignment! Glad he is sticking to movie.

I still find it funny that TWO Kim Sung Hoon will direct zombie sageuk next year ㅋㅋㅋㅋ Signal is my guilty pleasure so I'm more incline with Kim Eunhee's Kingdom (hoping for more updates on this sobs) but Hyun Bin! I hope his next project will do well and even better than Confidential Assignment.