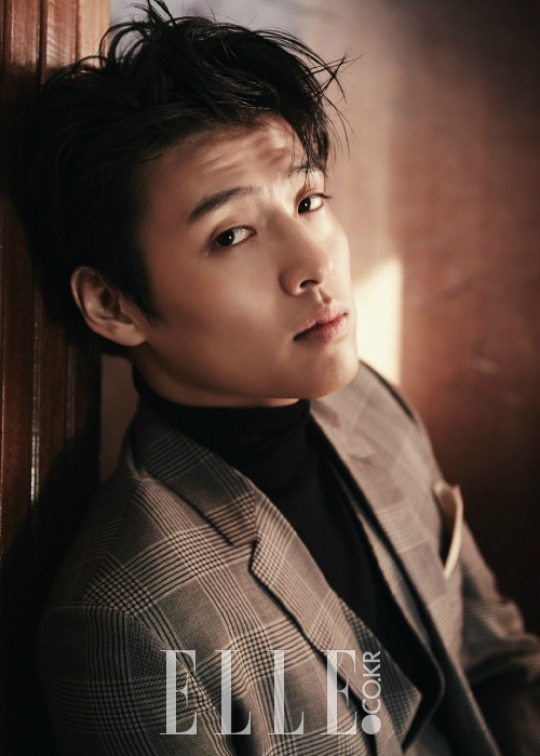 We’ve certainly been waiting long enough to see Kang Haneul (Moon Lovers: Scarlet Heart Ryeo) as the leading man in a drama, so it’s hard not to get my hopes up about this news. He might be returning to dramaland as the lead in a new romantic comedy drama called Dog Witch and Me, from PD Jo Soo-won of Gogh’s Starry Night, The Time I’ve Loved You, Pinocchio, Gap-dong, and I Hear Your Voice, among others.

The new drama is about an unusual love triangle between a blind heiress, her dog, and a veterinarian. All we know so far is the basic setup: The heroine is described as an arrogant, snooty heiress, and the dog loves her, while the veterinarian loves the dog. So I’m guessing that the dog plays Cupid and brings the two lovers together, which is freaking adorable. Oh, I hope they cast the dog from Chicago Typewriter and Uncontrollably Fond (at least I think they’re the same dog).

Kang Haneul is considering favorably for now, but I hope he’ll sign on to play the dog-loving vet. I know he’s capable of far more complex characters given his resume (heartbreaking biopic Dongju: The Life of a Poet, human dramas Retrial and Misaeng), but if he were a great rom-com hero on top of that, I’d only have more reason to love him. Come on, think of it as fan-service for everyone who wondered why your character disappeared halfway through Moon Lovers only to come back with a lobotomy! Surely the drama gods owe us for that one.

Dog Witch and Me doesn’t have a broadcaster yet, and is being planned for later this year.

If the dog is cute, second lead syndrome will be strong in this one.

Am I the only one who wants him to play the dog? He reminds me of a golden retriever ?

Nam Ji Hyun would have been awesome pair opp to him.

I would love that reunion.

Wait. Where is Kim Ji Won at the moment?

That is the pairing needs to happen.

Yes! I've been wanting him to be the lead in a rom-com since I first noticed him in Monstar (and had major second-lead syndrome)...this would be awesome! I loved him in Heirs and Misaeng and the beginning of Angel Eyes as well...

One of my favorite roles for him is in To the Beautiful You.

Please please no idol "actress" as the lead please. If they cast an idol, she will be able to play the snooty part perfectly but will stiffen up and be unable to produce believable character development beyond that. And forget about being relaxed in the clinches. But I hold out little hope; this is Kdrama after all.

We've known for a while now that Kang Ha-neul is lead material. Glad to hear a lead offer came his way finally.

I almost had a heart attack when I read this. Yes please, yes please, yes please. Come on dramagods, not to say you owe us after what you did with Moon Lovers but... nope, I'll say it, you owe us big time. BIG big time. Tell you what, if you let us have Kang Ha Neul, I won't even raise an eyebrow when you bring both Subway and Quiznos for PPL. That's right dramagods, I'm ready to give both Subway AND Quiznos. IN THE SAME SHOW.

(Kim Seulgi would be great as a leading actress too, just sayin')

I'll see you and raise you PPLs for flea & tick collars, heart worm medication, and organic doggie cuisine, plus a PSA for neutering/spaying. ;-)

Love this potential casting news! I will watch anyyyything with Kang Haneul!

My first thought is yess!!! Finally after so long a leading man role! Kang Hanuel in anything is perfect. The story sounds super cute too, cute dog + Kang Ha Neul = Happy fangirl

Omgyessss I would love to see him leading in a rom-com!! He oozed tons of charisma in Moon Lovers. This new drama sounds good. No mention of the writer though. Love the big, fluffy dog from Chicago Typewriter too. ❤️

OMG!!! I am so excited by this news. I love Kang Haneul. Yay he's finally getting a lead role.

God it brings back bitter memories of ML. I loved his character despite myself (dying wife and all that) in the beginning, his interactions with Hae-soo were simply so intense and sort of got me in the heart right off the bat. Still remember the talk they had after the attack in the woods, when Hae-soo was shocked by the violence and Wook told her about the first man he killed. Damn, that scene must be the sole reason I finished that drama. And I still don't know what happened afterwards...
But yey for Kang Ha-neul as a lead in a drama!

Oooh!! I love this PD since I really liked I Hear Your Voice and Pinocchio!! Hope KHN signs on!! The premise sounds cute and I'm a sucker for ?!! Haha~

Y'all the writer is a newbie which can be an advantage!

Haneul-ie! Finally a leading role and hopefully an interesting character as well. He's so cute off cam i wanna hug him so badly hahaha

Finally. I have been waiting so long for him to be elevated to leading man status. The boy is long overdue for lead role.

While I like the zany sound of a dog loving vet, I really could not find myself loving the snotty heiress characteristic in drama all over again. Why can't they come up with something more creative? Something like a female version of the eccentric Ahn Min Hyuk? We don't have that in K-drama yet.

Whatever it is, I am happy for him and I hope his first foray as a leading man in drama will turn out to be a success.

Oohh Kang Ha Neul in a lead role. This I got to see!

Well we really need an exclamation point leading role for KHN. Looking forward to this

Uwaaah, yes please. I adore him since Monstar, he's so cute and talented.

Finally! Kang Haneul as lead took a long time coming. Other second leads who came after him became leads before him, and some don't deserve leads at all. I hope they don't mess up his 1st lead role by pairing him to some unlikeable idols.

I like him with:
1. IU - great chemistry in Scarlet than she did with Junki, that's why they reduced Haneul's screen time in the show;
2. Han Hyo Joo - they would have looked great together in C'est si Bon;
3. Jung So-min - their pairing was short-lived in Twenty;
4. Kang Sora - I thought they'd be a pair in Misaeng;
5. Han Ji Min - she's way older I know, and she's not the greatest actress out there, but she's cute and beautiful. It's been a long time since her last drama;
6. Park Min Young - they'd make a good looking pair
7. Suzy - I don't like her acting (it was difficult to watch her in UF) but she's bankable;

I like Kim Seul Gi, but she's not in my lead list. There are 2nd leads who are exceptional as 2nd leads, but that doesn't mean they'll be great as leads. I've seen her in Splash Splash, it was a cute short drama, but I can't appreciate her as lead sorry.

No to GG idols pls (sorry to the fans but I'm not a fan).

I needed him back in dramaland n to be the male lead this tym. I thk his strength may be in melodrama. Further more he usually takes roles that are challenging, and diff roles to learn sth. Hes one that i always felt is mature, down to earth n isnt in the business for fame sake. Have a lot of respect for this guy.
Would love if he could take up this drama. N if he takes this. Hope the production team will offer the female lead to somone equally good.. Can i breathe Kim Seul Gi..

I hope he and Kim Seulgi would be leads on this drama!!!

The plot sounds like it could be a train wreck, adorable, or really anything in between. If I like the cast I will definetely check it out though.

Kang Ha Neul sooo pretty. I hope he accepts this. It's high time he gets a lead role.

I do hope he accepts this one! He was adorable and goofy in Twenty so I bet he's going to slay in this role.

I hope Park Shin Hye is offered as the female lead in this drama. I want to see her playing in a drama that contains comedy elements in it and acting as a blind rich woman will be something new to her.

that sounds like something I really want to watch

I wonder what happened to this drama now that KHN has enlisted. I love this PD so I really hope this project is still planned!