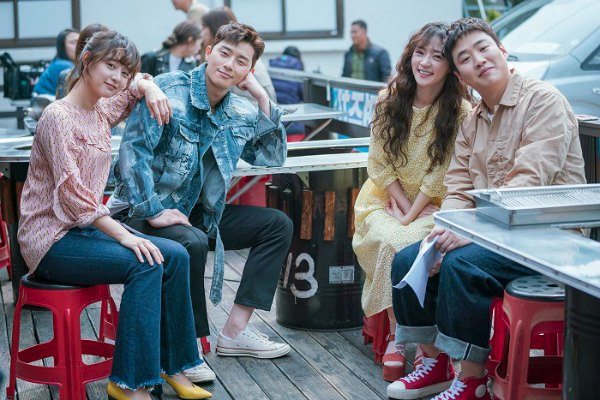 As expected, the presidential elections are creating a lot of scheduling changes in dramaland. KBS has finally confirmed their Monday-Tuesday drama lineup in May, and added two weeks of drama shorts to air during the election season. Following currently airing Perfect Wife will be the new 2-episode drama Individualist Ji-young, which will air on May 8-9. The next week after that on May 15-16, a director’s cut edition of Baek-hee Has Returned will air. And finally a week later, Fight My Way will premiere on May 22. Okay, let’s go into some detail about each drama!

New mini drama Individualist Ji-young is a comic romance healing drama starring Min Hyo-rin (Persevere, Gu Hae-ra) as a loner woman who only likes herself, and Gong Myung (Drinking Solo) as a dependent man who cannot live without other people around him. The drama is about how they meet and heal their psychological wounds together. 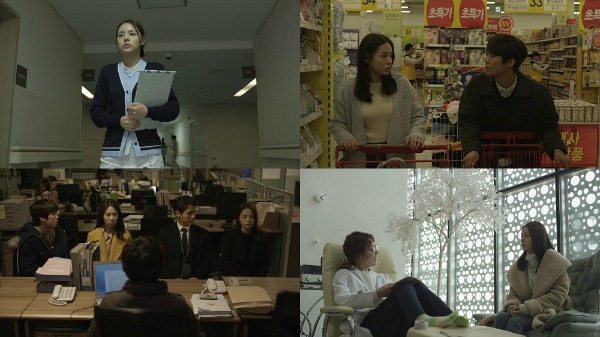 Baek-hee Has Returned is about a former It Girl of a sleepy island town, who left home abruptly at eighteen only to return eighteen years later with a new name and a daughter in tow. The original 4-part drama that aired last summer will be re-broadcast in two parts.

By now we should all be familiar with Fight My Way (previously Third-Rate My Way), which is the story of two bickering best friends who live a third-rate life, but want to live life their way. We have a bit more information about the main cast who are shown in the newest still. The show will focus on the relationship between these four friends including “a romance, a bromance, a womance, and a four-mance.” The four main actors: Park Seo-joon (Hwarang), Kim Ji-won (Descended From the Sun), Ahn Jae-hong (Answer Me 1988), and Song Ha-yoon (My Daughter Geum Sa-wol), are called The Dummy Fantastic Four, so expect a lot of laughs when they get together.

Of the foursome, Park Seo-joon, Kim Ji-won, and Song Ha-yoon grew up together and Ahn Jae-hong later joined the group as Park Seo-joon’s high school friend. Their strong friendships were formed while getting in trouble together and being punished together in their youth. As adults they all have different jobs and different personalities, but the one thing they share is that they all want to have complete control over their lives. I love how the production is going to focus on the relationships between the four cast members; it reminds me of great friend-based ensemble casts like the Answer Me series, and one of my all time faves, Coffee Prince.

Every broadcaster seems to be moving their Monday-Tuesday premieres to May 22, so Fight My Way will have some stiff competition with Lookout and Circle both premiering the same night. Though I feel like Lookout and Circle may compete for viewers since they’re both thrillers. Perhaps Fight My Way will get everyone else? In that vein, they may have a shot at some respectable ratings. Here’s hoping!

If they make it seem like liking one's own company is wrong in Individualist, I may cry. Ohitorisamas are allowed to like being alone! Aside from that, I like the look of it and hopefully Fight My Way will be worth the wait.

True! Hopefully, it explores a balance between being okay to be alone and sometimes needing others. Having other people is a good thing, but I like hanging out alone (sometimes I actually need to have that alone time).

NOo!! I was excited thinking there was only 10 days' wait for this drama, I even began my countdown, what am I going to do now?!

I know! I was so looking forward to Fight My Way. I guess I have to just settle for looking at memes and rewatching clips of my favorite dramas in the meantime.

My Sassy Girl premier the same night too?

No, Its premier 29 May. One week after.
May Schedule:
May 10: MBC Ruler Master of The Mask, SBS Suspicious Partner
May 22: KBS Fight My Way MBC Lookout TVN Circle
May 29: SBS My Sassy Girl
May 31: KBS 7 Day Queen

Lol. Looking at the May schedule almost hurts right now. I'm just here mourning the future loss of my social life, sleep, and sanity. I pretty much want to watch every single show on here!

And, you know, I probably will.

Watching dramas is my happy pill these days. Yeah, It's my guilty pleasure...Poor my eyes and social life...
No way I watch all of them in the same time because I already have two on going dramas right now. lol. Probably, I will be taking one or two new dramas, others will wait for review first and watch it once it's done.
Hopefully these dramas can deliver, doesn't disappoint who has been waiting for a long time and have high expectation.

What is sleep, anyways, when there's dramas to watch?

I feel like I'm looking at an exam schedule! Lol

I feel like I inadvertently caused this...I wanted it too much ;_;

I agree, although I enjoy the occasional thriller, it's best if I have some fluff to watch in between (that way I don't have nightmares ?)

The Dummy Fantastic Four! Oh oh! I didn't expect the production team to use these nickname. I'm ready to roll over on the bed or wipe tears for the laughters ... Bring it on!
Ahn Jae Hong finally will pop up again on my screen... It's been a long time...
“A romance, a bromance, a womance, and a four-mance.” Finally these kind of story coming back again after heavy plot from dramaland in the first half of the year.
More details that coming up about this drama, more craving myself to watch this drama soon!
Plot and details sound good, perfect on paper so hopefully the execution is on point.

Aw. I'm pretty bummed about having to wait for this, but I guess that will be good for production though. And Individualist Ji-young sounds pretty intriguing!

Yes, yes, and yes to the four-mance. Please let this be a new trend. It's just too bad it makes me even more eager for this to begin...

Waaaaah. Okay! I wanted to be surprised by the new sched but I'm really not because elections! I'm just sad that we'll have to wait a little longer for Fight My Way! Buuut, I just found out about Gong Myung's miniseries and I'm gonna be on the lookout! I wonder how it's gonna turn out cos, I like my own company and I'm also ok with having other people around me (although I prefer to be alone most of the time and I need a recovery period for spending hours with a lot of people). Hoping Individualist Ji-young will be a good one!

It was too beautiful to be true! Who could have hoped for a correct premiere in the midst of presidential elections ? I mean I hoped for it but elections are indeed much important! (Trust me I know...my country is going through the same lately!) I guess I can be patient if this delay help the production and the duty of citizens!!

Fight my way is fast becoming the drama that I am eagerly expecting! The story feels like slice of life focusing on relationships as well as coming of age in that the characters want to achieve their dreams.

Well, I kinda expected that this drama will be pushed back because of election, but I thought it'd be only one week delay, but two weeks?? I've been waiting for this drama since the first time they announce the main casts. I'm sad.

"The show will focus on the relationship between these four friends including “a romance, a bromance, a womance, and a four-mance.” The four main actors: Park Seo-joon (Hwarang), Kim Ji-won (Descended From the Sun), Ahn Jae-hong (Answer Me 1988), and Song Ha-yoon (My Daughter Geum Sa-wol), are called The Dummy Fantastic Four, so expect a lot of laughs when they get together."

Wow!! Guess I'll need to delay the anticipation for Fight My Way by two weeks. Thanks for the update!

Ok, I'll have to wait a few more days for Park Seo Joon. But good things come to those who wait, right?