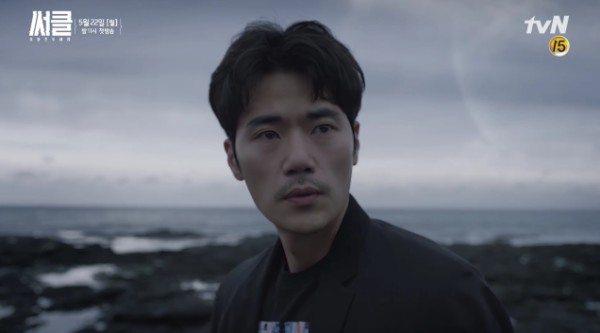 Upcoming sci-fi mystery drama Circle has released another cryptic, intriguing teaser featuring one of the main characters, played by Kim Kang-woo (Goodbye Mr. Black). The story takes place in two timelines—2017 and 2037—with Yeo Jin-gu (Jackpot) playing a college student in the present when aliens arrive on Earth, and Kim Kang-woo playing a police detective in the future where the world has been divided into two territories: utopian “Smart Earth” and another “Ordinary Earth” that’s still filled with suffering.

I can’t say that it’s a very informative teaser, but the landscapes shown are so breathtakingly shot that it made me feel like I was watching a clip from a nature documentary. It starts with Kim Kang-woo’s back to us while he faces the seaside with large crashing waves and tension-building music in the background. Then the scene switches to a green moss-covered woodland, with eerie bird calls being heard. And the scene switches again and again like he’s searching the desolate Earth for a clue or a pattern.

Kim Kang-woo’s voiceover says: “In a world where emotions have been eradicated, there’s been a murder that should not have occurred.” Flashes of a burnt evidence case file and of someone in a gas mask go by. Perhaps they’re Kim Kang-woo’s own memories because at the end, he thinks to himself, “Wait for me. I will remember.”

tvN's dramas may not be faring very well ratings-wise atm, but their cinematography has always been top notch. I'm excited for this to air.

Cool teaser! I am always amazed at how much passion and attention Production House puts into making Kdramas, mostly ones in tvN. What's sadden me was when rating flops and the projects might not end up profitable. Or even worse, if the network will no longer pick up these kind of projects in the future.

After reading suicide related news in production house which going broke, i don't roll my eyes so much on PPL. I just hope it's enough for them to keep going and giving us these kind of shows.

Wow, I can already feel the sci-fi vibe with this cinematography! Breathtaking.
Hope everything else is as amazing and that this drama doesn't disappoint. I'm really anticipating it.

But...Am I the only one who thinks that glass house looks like the Louvre?

Gorgeous landscapes! Also excited to have Kim Kang-woo back on my screen soon, fingers crossed this will be good for him.

I agree with the comments above the cinematography is very pretty to look at. The only drama I have seen Kim Kang-Woo in was Missing Noir M and I enjoyed it. Also Yeo Jin-Goo is in this show so that is another plus. I am looking forward to this one the most from the upcoming dramas.

any mentioned of Missing Noir M deserves a reply and a thumbs up.

I did enjoy that drama as well.

:) I always go back and re-watch the intro and episodes when I can.

I am still rewatching Missing Noir M over and over again.

This just keeps getting better and better. Who is the PD again, cause that teaser looks dope.

The PD for this drama is the SNL PD Min Jin Ki, but I think the director for this teaser is this guy is called Director Mok? https://www.instagram.com/director_mok/

Kim Kang Woo looked so handsome, and that cinematography is A+ !!!
I'm totally looking forward to this, I hope the story will also be good :)

This looks gorgeous! Asian sci-fi are rare, more so good ones. I need to erase Kim Kang Woo's previous drama so please be awesome.

I didn't watch past the first episode where it seemed and I want to erase it.

The teaser looks SO good! I could already feel the mysterious vibe of this drama! BTW, is Yeo Jingoo the one in the last cut? The one holding the burning evidence? Kim Kangwoo was seen holding the already burnt papers, but on the last part someone's holding it while burning... The hair looks similar to Jingoo's. And the poster is also out as well! And it looks great~ https://twitter.com/JANUS_ENT/status/856655937884397569

At first I was kinda disappointed because looks like OCN not gonna continue Missing Noir: M. I love it, and the ending looks like a promise for a sequels, you know Vampire Prosecutor style.
But now I see this teaser and find myself waiting for the first episode to come.
Circle sounds like Upside Down when they said 2 territories, but I wish it wouldn't end up like the latter because I think that movie is a mess.

Gotta love a good sci-fi. They seem to be a rarity in dramaland. So I am excited to see this.

Wooo love the cast!! This better be good.

Pretty always gets me...pretty scenes, pretty decor, pretty art, pretty acting, pretty actors, etc. This is beyond pretty for me. And it's sci-fi...please be good!

The cinematography and the visuals aside, it doesn't excite me. I've seen enough melancholy in TVN already.

I'M UP FOR THE BREATHTAKING CINEMATOGRAPHY!

The color palette, if you will, is certainly contributing to that dreary, mysterious vibe.

Please let it be a success.. GO Kim Kang Woo!
It's probably the drama I'm the most anticipating this year.