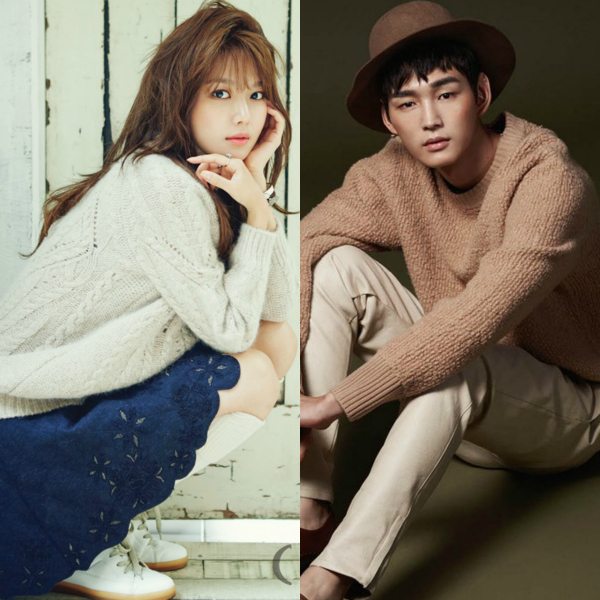 Actor Lee Won-geun, who is currently starring in Mystery Queen as an adorable rookie police officer, and SNSD’s Sooyoung (Police Unit 38), who was just confirmed to be in MBC’s summer weekend drama Man Who Sets the Table, have been announced to be the leads in a new web drama called Someone You Might Know. It’s JTBC’s first web drama, and the anticipation is high especially after the huge success of the station’s last drama, Strong Woman Do Bong-soon.

As of yet, no character details or plot synopses have been released. Even the filming and production schedule is undecided because Lee Won-geun has to finish Mystery Queen, but we do know that the web drama will consist of ten episodes containing some sort of loveline between him and Sooyoung.

I’ve been trying to imagine their chemistry, but somehow can’t picture them in the same drama together. Despite both being relatively green to the industry, I consider them to be both pretty solid, although not blown-out-of-the-water-fantastic yet; but they’ve both been warm and approachable in their past roles, and Lee Won-geun has been gaining experience in films in between drama projects.

Someone You Might Know may be broadcast on television and released online at the same time, but the schedule has yet to be determined.

I am pretty sure all Lee Won-geun has to do is smile at her - bam instant chemistry. I mean how can anyone resist that beautiful grin??? This show looks promising.

He has a beautiful smile that can melt the ice.

Yes his smile ? his entire face just lights up. Makes me wanna go rewatch his scenes in sassy go go!

And I don't exactly know how/why, but he seems like someone who is a good kisser too.

Definitely adorable. He is all Crinkly Eyes, I loved Sassy Go Go cos of him :)

Sooyoung be blessing me with drama news left and right.

With Lee Won Geun too? Yes!
I don't watch dramas for him but he's always, always a welcome addition.

Ooooh I love the sound of them working together! Bring it!

I'm happy for her, she's getting more offers and more chances to show her acting skills. They are both good and Mr. Crinkles is adorable!

I notice his voice is really deep in Mystery Queen.

His voice is pretty deep. But we are all so focused on his smile that his voice is rarely mentioned.

Glaf for him, i feel like he's wasted in mystery queen he's adorable in that role, but he just feel like a side character.

He has a baby face, i wonder how his chemistry with SY would be, good luck.

true. actually thought Mystery Romance is a noona romance during the 1st ep since they look cute together.

Haftasay, I'm looking forward to this web drama! I haven't watched any of their dramas (I might soon) but I hope this'll be a good one.

I've been rooting for Lee Won-geun's career since Sassy Go Go, so i hope this a good project for him.

I honestly don't really know sooyoung so i'm a bit curious about their chemistry and i don't know how the story is going to be like, so in short i think i'm going to watch this drama just because of lee won geun. I really enjoyed him in sassy go go!!!....

Mystery Queen is the bomb diggity and Lee Won-gun is really adorable in it. I might have to check out this web drama.

Aww I love them both! I can't picture them together, but they're both so cute. I'll just cross my fingers and hope it's good!

I might check this out for Keunie... Haven't had a chance to see him in anything else since Sassy Go Go and I really liked him there. =)

Wow i was hoping LWG can be casted as a lead again. I enjoyed his character n performance in Sassy Go Go thought his stint in movie..wasnt my type. I never picture him opposite of Sooyoung. Would wait for teasers n more to know their chemistry.

I sure hope that I will be able to watch this web drama. I just fell in love with Lee Won-geun. He has the sweetest, cutest smile and twinkling eyes I have ever seen. Good Luck!

I sure hope that I will be able to watch this web drama. I just fell in love with Lee Won-geun. He has the sweetest, cutest smile and twinkling eyes I have ever seen. Good Luck! Who wouldn't fall in love with that face.

He is cute in the Queen of Mystery

I just recently finished that volleyball drama with him and his smile is just ridiculous. I never really believed in the whole swooning/weak-at-the-knees thing that always happens in dramas/movies/books until he started flashing that puppy grin nonstop. He's going to make me go on heart medication x.x

Now I'm imagining all those smiles, and my poor knees are suffering..not to mention the butterflies in my stomach. How is that even fair?

I don't know why made me laugh harder, Subway sandwich maker or serial killer with a saw!

Started my great respect for Lee Won-geun since "Misbehavior" with Kim Ha-neul. Saw only the trailer, but he was bam! (I first noticed him in Hyde, Jekyll, Me)

I have been waiting for him to get q lead role since sassy go go, I don't know the girl, but will check it out cause of him, and his smile a gold

Even though it's a web drama lead role, yay I'm happy for Lee Won-geun. Good to see Sooyoung in new roles, I hope she gets to develop more since she's probably the best in my opinion in terms of acting within SNSD.

Someone You Might Know
Just hit me as an eerie title.

I am so freakin happy for Sooyoung ! 2017 gotta be amazing for her acting career ?. I do agree that it is not easy to picture them together but I have faith in Sooyoung. She had great chemistry with all her costars so far !
I read it is a romcom thriller with a love triangle so I am excited :D

Ooh, unexpected pairing! I am officially intrigued! Would love to see more of sooyoung on my screen :)

Yes. Please make this happen! I love Lee Won Geun and Choi Sooyoung! Together, they could be amazing. I wish it wasn't a web drama though because it's too short!