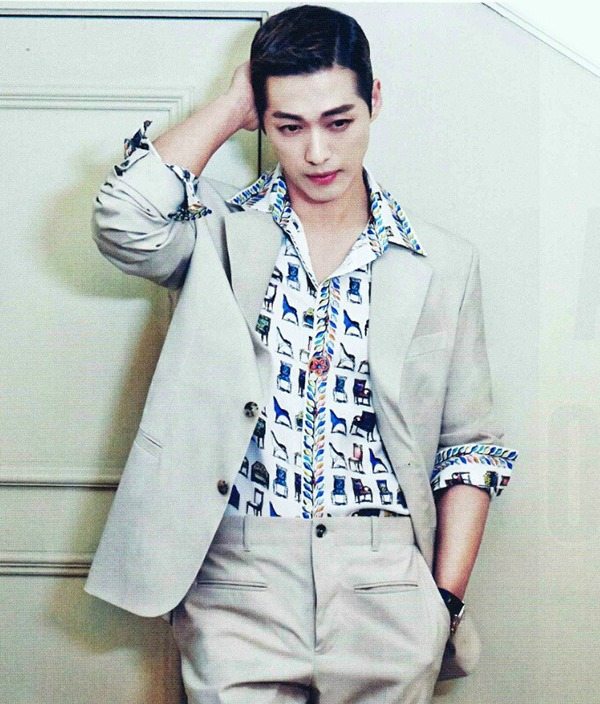 Namgoong Min, who just recently wrapped up his successful office comedy Chief Kim, is already looking at new projects. According to his agency, 935 Entertainment, he received an offer to star in upcoming SBS legal drama Falsify. The plot is centered around a story of how a group of reporters and prosecutors work together to uncover the truth in a world that’s layered in deception.

Writer Kim Hyun-jung (Who Are You—School 2015) is writing the script, and if he confirms, Namgoong Min will be playing a reporter. Lauded actors Chun Woo-hee (The Wailing) and Yoo Joon-sang (Pied Piper) are also still considering signing onto the project; they’re up for the parts of an elite prosecutor and stubborn journalist, respectively. Jeon Hye-bin (Woman With a Suitcase) has also been tapped to play a photographer who works with Yoo Joon-sang’s team. So it looks like the decks are stacked with more media people than legal people, but the plot heavily hints at corruption, so I’m sure we’ll get more than our fair share of unscrupulous justice officials and politicians.

Namgoong Min’s casting is not decided yet, as his recent popularity from Chief Kim has gotten him bombarded with scripts for movies, dramas, and plays and he is still deciding which follow-up project to go with. Monday-Tuesday drama Falsify will air on SBS starting sometime in July this year.

Min? You'll be back soon?

One can only hope!

He's confirmed according some sites.

I was just thinking an action show or a deep melodrama might be next for him, something that will let him go off on a tangent from the 2 recent comedy shows he did. He's so incredibly fit I could see him doing a Ji-Chang Wook style action show as some kind of senior spy and just nailing it.

It would be interesting seeing him pitted against Lee Joon Gi in some noir drama. Both would make worthy opponents.

Omo, hell to the yeah (or is it D to the O? ?) with this. Did you see his shower scene in Chief Kim?! I had to do a double take - that man is rrrrripped :O

Ok I forgot i read about this drama, i expected SBS to court him in something after his success.
I think its better to choose movie as his next project, but good luck.

Namgoong Min looks like a hot vampire in that picture. I'm ok with this.

Why would he go back to second lead roles after his recent success?

In this case, Yoo Joon-sang is a multi-talented actor who is well known on the big screen, musical and television. A singer, artist and writer.
I think Namgoong Min would love to act with him.

Drama is different to movie. NGM just got his first lead role after decades of extras and supporting. Now it's time for him to shine on his own.

And you are looking as a lead actor who does both. There is a reason why they are offering him the lead role.

In regards to his two year break from acting, Namgoong Min explained, “After ‘Can You Hear My Heart,’ I decided I wanted to take on only lead roles in dramas and so I turned down any offers for roles as a sub-lead. Because of that, I ended up not being able to work for two years. I think that luck and fate play a significant role in every actor’s career.”

He continued, “Before, I used to only look for cool roles that I thought I could pull off well; however, I now look at the project as a whole when choosing a drama. As long as there’s a good director and good writer, it’s a pleasure as an actor to take on any role the project requires,” demonstrating the actor’s matured mindset.

Technically it's 'going down' but this isn't him just being a second lead as would be if he was a second lead in a light rom com. This is a drama with some of the greats. Being in the same drama as such a high sunbae ,IMO, is considered an honor and something of a status boost since that shows you have stood with them and have learned from their knowledge. I think this would be great for him even though i'd wished for him to do an action drama with many shirtless scenes after chief kim. I'm happy for this too though._.

He has worked in the industry for 15 years so he has plenty of sunbaes. He is nearly 40 now.

Some of the best actors in the industry have been playing supporting roles their entire career and some rarely takes lead roles because they shine in whatever roles they picked.
Kim Gap-soo, Eom Gi-joon, Yoon Je-moon, Jo Jin-woong, Kim Eui-sung, Ma Dong-seok, Oh Dal-su (my favorite), Honey Lee, Im Joo-hwan, Park Jung-min etc.

There are actors that can lead drama, some cant not. There are few actors can lead rom com or have romance in project, some can work all their life and people dont even remember their names.

This seems to be a good drama to consider. Like you said, if he takes this role, he gets the honor of working with some high profile, talented movie actors. I'm betting he's looking for a serious drama after doing comedies, Beautiful Gong Shim and Chief Kim back-to-back. And that was after doing back-to-back dramas where he plays the villain. He's probably looking to branch out and diversify.

I don't think he is being offered the role of second lead since he is experiencing new high of popularity. I think this drama is more like an all-stars ensemble casting. Much like the upcoming K-version of "Criminal Mind". Perhaps each actor to get equal screen time instead of focusing on only one particular actor.

I will be fine if he choose to do this. I trust his choice. On the other hand it won't make sense if he is playing second lead to some rookie actor , idol or younger actor who is lacking from him.

I am not sure which article mentioned NGM's role is a second lead, but 935 Ent has confirmed today that NGM has accepted the role. According to the new articles, NGM's role is the male lead.

Although I would love to see him on my screen again I think some rest and enough sleep would be much better for him. July seems awfully close....

I was thinking this too. I don't want him to experience burnout

nope...i don't want him to take the role...want to see him in something more interesting!

So many legal shows... This is coming from a lawyer. Oh well, at least this is not purely legal. ?

Im glad people really notice his acting chops n versality but he did mention he hasnt slept more than 3 hrs in a long while. Rest is overdue for him. Hope he takes the time to recuperate n rejuvenate first

He better choose his project wisely. This is too soon to decide on a new drama. As much as I want to see him again, it's better to rest first.

Hope he will choose wisely and as long as the writer will deliver i'm more than sure he will be on board with his new project...I can't lie when i say i want to see him in a badass role again,in a noir type of drama(ex.Cruel City)sporting a Nam Gyu Man style even if i adore him in the witty comedy type

eh it doesn't sound very interesting to me, i hope he picks something else but if he chooses this project i'll might watch it.

Excited to see NGM back on screen so soon, but as soon as I read this: Writer Kim Hyun-jung (Who Are You—School 2015) is writing the script...

Part of me wants him to get some rest, but then another part of me also wants to see him in more dramas.

I don't know, I am not a very fond legal drama lover these days. There are just too many of them. :(

However, despite a lot of strange things happening with SBS, I still find most of their dramas quite fun to watch. The production nearly always looks expensive. If NGM takes this role I might watch it just for the sake of his acting.

I'm just so glad he's finally hit stardom and has the opportunity to pick and choose from scripts like a boss! What a bundle of talent he has shown that he is.

It would be interesting to see him pitted against Lee Joon Gi in a noir drama. Both would make worthy opponents.