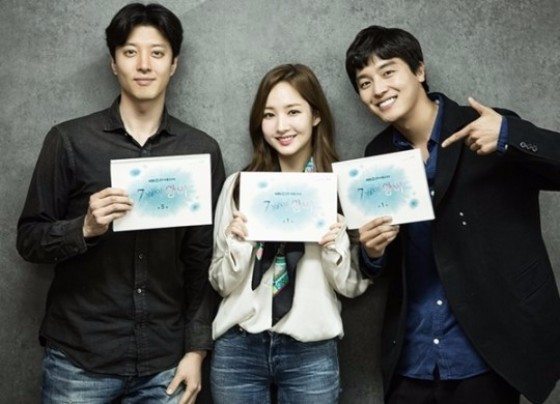 Stills from the recent script read of upcoming sageuk Seven Day Queen have been released. The drama is about the tragic Queen Dangyeong of the Shin clan, who had the shortest reign in Joseon history at only a week. She becomes caught between the power struggle of two brothers, her husband Jungjong and his tyrannical older sibling Yeonsangun.

Park Min-young (Remember—Son’s War) is set to play the queen, while Yeon Woo-jin (Introverted Boss) and Lee Dong-gun (Laurel Tree Tailors) are set to play Jungjong and Yeonsangun, respectively. Chansung (Ms. Temper and Nam Jung-gi) and Go Bo-kyul (The Lonely Shining Goblin) will be playing characters who support Jungjong as he starts a revolution to overthrow his terrifyingly cruel brother from the throne.

I’m pretty excited for some of the veteran actors in the cast, including Jang Hyun-sung (Woman With a Suitcase) and Kang Shin-il (Whisper), who always give strong, grounded performances no matter what roles they’re in. It also looks like hilarious Weightlifting Fairy Kim Bok-ju uncle Kang Ki-young will be the resident radical scholar/funnyman, which I’m completely stoked to see. Other actors that were present at the script read include the younger counterparts for Park Min-young’s and Yeon Woo-jin’s characters: Park Shi-eun (The Good Wife) and Baek Seung-hwan (Beautiful Mind).

PD Lee Jung-seob (Healer, Neighborhood Lawyer Jo Deul-ho) started off the script read by saying, “Thank you for participating. Let’s work hard together to create a good drama.” According to reports about the four-hour-long meeting, Park Min-young showed her characteristic lovability as she was acting out her part as Chae-kyung, the woman who later becomes Queen Dangyeong. Yeon Woo-jin expressed a focused energy as he immersed himself in becoming Lee Yeok (aka Prince Jinseong), the future King Jungjong. But it was Lee Dong-gun who surprised everyone by showing a 180-degree reversal from his normally cool, suave image to portray the power-hungry king, Yeonsangun. 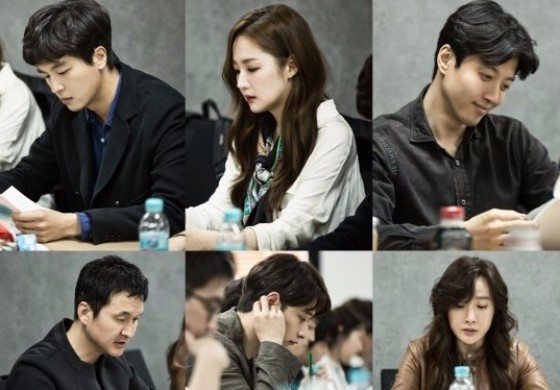 Good to see Park Min-young again! I miss her since Healer. Hope the drama will be solid.

Heh.... we have a reunion between PMY and Healer PD. Even her previous boss, the newspaper editor is here.

Hoping for a good show!

Am I the only one looking forward to Park Min-young and Yeon Woo-jin's kiss scenes? :D

This is looks promising, they gathered a strong cast.

I'm excited for this one!

I wonder how the story will play out if she was only on the throne for a week?

I can imagine it'd probably focus on a lot of the political stuff since I'm sure that takes a long time to really flesh out properly
Plus the love-line between her and her husband before and during her short reign, plus what happened after.

I think she will be queen around epi 8, since this is 20 epi drama, and sit on the throne around 4-6 episodes before dethrone. The centre plot of this drama will be probably romance between the leads. I dont think she will be a queen very fast from early episode since there is Yeonsangun's character in this drama as well. This drama will probably show the romance development between the leads for several episodes, aside from the normal political aspect in sageuk. I dont know what to expect from this drama, and I honestly dont excited to meet Yeonsangun again very soon in another drama , after Rebel ends.

A queen follows a queen. I hope this is the saeguk that can capture my attention again...it's been a while.

Thank you so much for the article, tineybeanie. I super look forward to this drama. Sadly, I do not see much excitement about this drama.
Viki channel only has 30+ followers. I hope everyone will follow the Viki channel
https://www.viki.com/tv/35042c-queen-for-7-days

The tyrannical King Yeonsangun is depicted in currently airing drama "Rebel: The Thief who stole the people" by Kim Ji-Suk. It will be interesting to see the different performance by Lee Dong-Gun.

Maybe because no teasers yet.

I'm happy to see Yeon Woo-jin in a new role so quickly after Introverted Boss.

Park min young is finally back again!!!!yeaaah!!! Oh and recently watched "Introverted boss" and i really enjoyed it!!! Looking forward forward for this drama!!!

I'm roooting for Yeon Woo Jin! This is his first main role in terrestrial drama on weekdays, if I'm not mistaken ! I hope drama can get decent ratings despite having to head to head with Kim So Hyun and Yoo Seng Ho in Ruler Master of the Mask and I think the same genre broadcast almost simultaneously is not a very good idea...

He had a main role in Divorce Lawyers In Love(an SBS drama methinks) along with Jo Yeo Jung. But no one probably remembers that drama(or no one wants to remember) lmao.

Im rooting for Yeon Woo Jin too. I think hes been consistently good in his projects but the closest thing hes had to a hit is Marriage not Dating.

I want this to be good so much. I just love the leading cast! I'm glad the supporting cast is getting stronger.

Seeing Park Min Young makes me want to watch her and Ji Chang Wook again. It's a shame they are in different dramas. *sigh*

Yey, more dramas to look forward to in KBS...since it's the only channel I can watch Korean dramas in here in Palau. #IslandLife

I like Yeon Woojin and I felt bad with how his previous drama was received. He was quite adorable in it. Hope he will have more success with this drama with what looks like a more interesting story.
I am also quite excited to see Lee Dong Gun in a sageuk and his take on the king. Hopefully this drama will be good!

Innnnteresting. Her life story is heartbreaking, and I'm ready to have my heart ripped into pieces. The men have been wonderfully cast too. Yeonsangun is of course a stalwart in korean dramas, and it'll be interesting to compare Jang Dong Geun's character to Kim Ji Suk's in Rebel that's currently airing.

(And maybe I'll finally be able to mix characterisations of Jungjong in my head, rather than him just being the dude who goes 'mmm' with a thoughtful, interested look on his face in Dae Jang Geum heh.)

There's always something so sexy about actors who did 180 degree reversal from being the usual heroes to baddies/ antagonists. Park Bo Gum, Nam Goong Min and now Lee Dong Gun? Heck Yoo Ah In was triple hot in Veteran. Now I'm curious to see LDG's take on power-hungry king.

Awww I like lee dong-gun better. Wish he was the lead. Although I guess he couldn't quite pass himself of as the younger brother to yeon woo-jin.

Too many dramas to look forward to! ??

I love the both of them too!

Yay, Yeon Woo-jin! He was only considering when I last heard so I'm really excited he'll be on our screens again so soon. I completely share the sentiments several others have already expressed - he's so underrated and I really hope he'll get some proper recognition. I don't know of the other leads but the rest of you seem quite keen so I'm taking that as a good sign :)

I hope PMY will end off with yeon woo Jin in this drama... I personally don't like lee dong gun... I can't buy his acting; he doesnt seem sincere to me.