The King Loves to play in azalea-filled forests 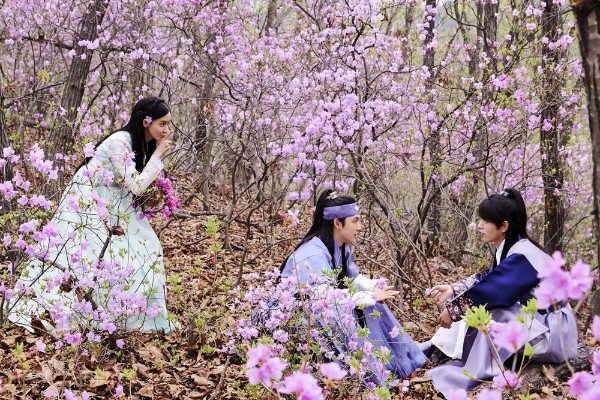 The latest round of promo stills for MBC’s The King Loves includes this playful scene between Yoon-ah (The K2), Im Shi-wan (Misaeng), and Hong Jong-hyun (Moon Lovers: Scarlet Heart Ryeo), which was shot on an azalea-filled mountainside in Ganghwa-do. The upcoming sageuk is about the love triangle between the three of them, that’s wrapped up in a power struggle as both men vie for Yoon-ah’s heart and the Goryeo throne.

Jung Bo-seok (Monster) will be playing Im Shi-wan’s father, King Chungryeol, who politically marries a much younger woman to stabilize Goryeo’s power. Although his ancestors were warriors who fought to conquer the Goryeo lands, King Chungryeol is of a weaker mold, preferring to receive validation of his manhood through spending the national treasury on wine, women, and hunting. He’s a poor father figure to Im Shi-wan and a sorry excuse for a ruler. Park Hwan-hee (Descended from the Sun) plays Hong Jong-hyun’s sister, who has a one-sided crush on Im Shi-wan’s character, while Oh Min-seok (Secrets of Women) plays King Chungryeol’s kinsman and Goryeo’s hidden political mastermind.

In addition, some still cuts of the childhood scenes for The King Loves have been released, featuring one of my favorite budding stars, Yoon Chan-sung (Romantic Doctor Teacher Kim), who is Hong Jong-hyun’s younger counterpart. Im Shi-wan’s childhood character is played by Nam Da-reum (Pinocchio), while Yoon-ah’s is played by rookie child actress Lee Seo-yeon. Especially in some sageuks, the prelude with the younger actors can steal the entire show, so I’m excited to see what these new talents will bring to the table.

Pre-produced historical melodrama The King Loves will be broadcast on MBC sometime in 2017. 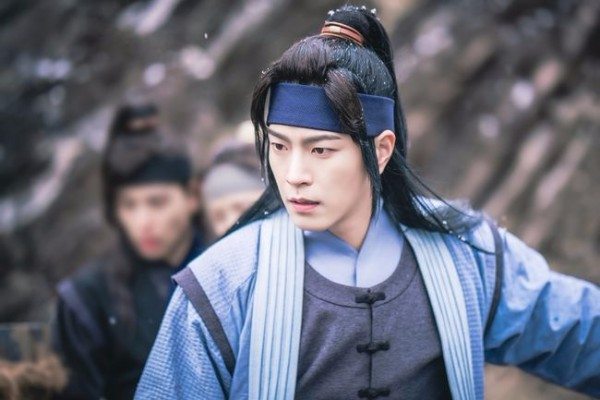 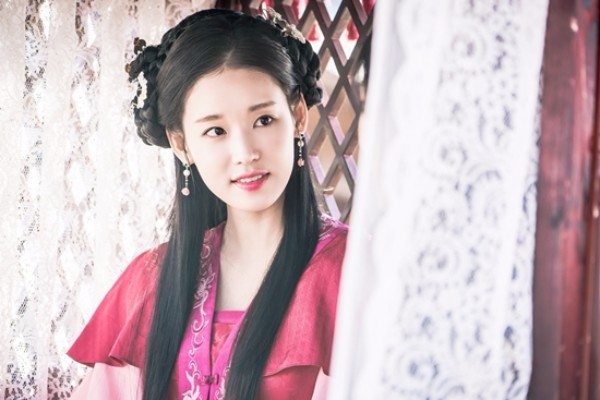 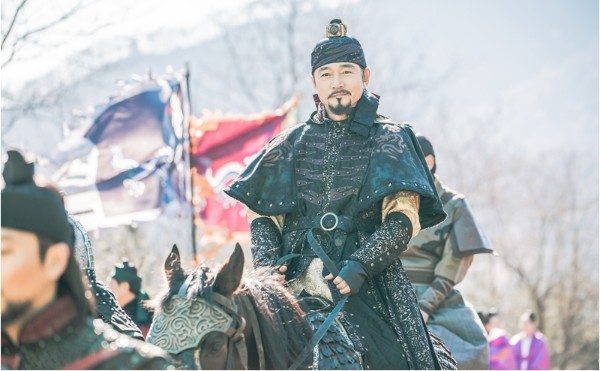 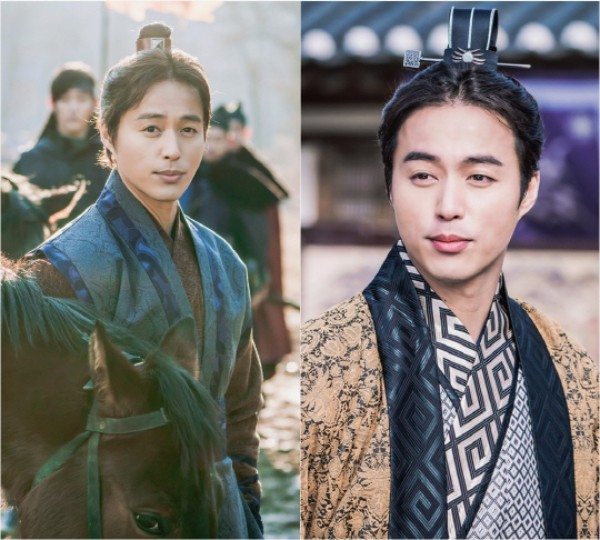 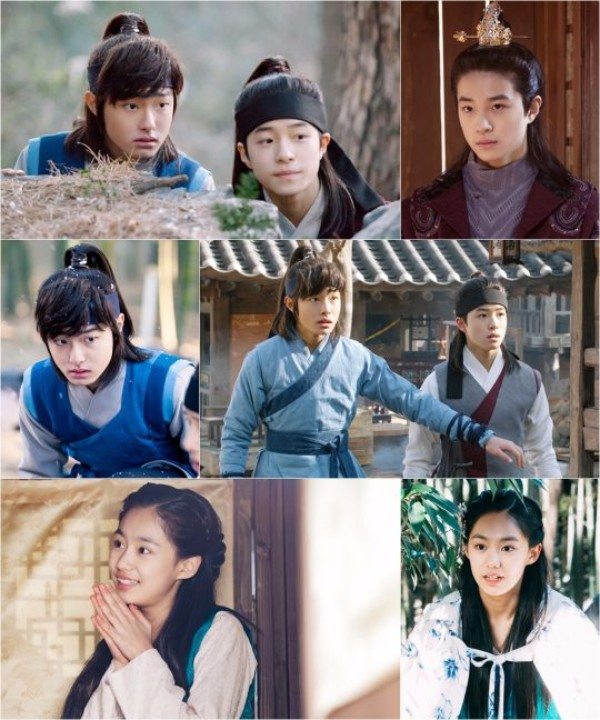 The first pic looks beautiful. I'm looking forward to watching this and I'm glad it doesn't start in May because I would've been torn between this and Ruler: master of the mask!

And I love Nam Da-reum, he's just so talented!

Finally a picture of Hong Jong-hyun! I was wondering about how ue would look like as a kind friend in contrast to his Wang Yo in Moon Lovers. And yay for another amazing child actor pairing! Yoon Chan-sung and Nam Da-reun are truly great - it would be awesome if they star as bromantic leads in a drama when they are adults. Speaking of child actors, I think those who were in Six Dragons Flying are gaining more recognition such as the latter actors and Park Si-eun and Baek Seung-hwan who will star as the young Queen and King in Seven-Day Queen.

Can't wait to see this for Siwannie and I love child actor NDR!!!

Love the flower-filled mountainside pic. However, lookig at these stills just reinforces my respect for whoever was in charge of hair and makeup on Moon Lovers: Scarlet Heart Ryeo. The hair and makeup here just don't compare. I'm glad it's so much nicer that Hwarang, though.

Oooh bring on the pretty, I say! Do I see the cute nurse from DOTS? :O She looks gorgeous in the stills here and from the look of it, she'll be playing a similarly bubbly character here as well. Well consider my attention caught. I love me a good sageuk, esp with adorable younger counterparts!

Wow! That's a whole lot of pretty in those posters. I wasn't really keen on the king loves but with these shots and all those pictures, I'm game. That scene of Yoona creeping behing Im Shi Wan is just epic. I'm kind of hoping she dumps a ton of fallen leaves on his pretty shiny hair. Hehehehehehe.

Oh gosh this drama looks beautiful and only wish is female lead wasnt Yoona, sorry to Yoona fans. But she is bland to me. Also Nam Da Reum is a real gem.

I could just watch this solely for Nam Da-Reum and Yoon Chan-Sung. They were both so great in sfd

What a beautiful location in the first photo. Those azaleas are gorgeous. Here's looking forward to more sageuk goodness. And HJH minus the Guyliner of Evil. ;-)

Not going to lie. I'll miss the Guyliner of evil lol

I hope this wont be the case where the child actors surpass the adult actors. Like Moon Embraces the Sun, you had Kim You-Jung do an amazing job but then her adult version played by Han Ga-In was a complete and utter disappointment. Hopefully Yoona can carry the weight of this role and not be overshadowed by her childhood actor.

It could be so. We had some drama that the child actors surpass the adult actors. Especially in this drama, the main actors are the weakest actors for sageuk (they could be good in modern drama, but may not so in sageuk)..

I'm hoping the same especially because it's a rookie actress. Would not be a pleasing comparison if she's surpasses Yoon Ah.

this drama looks like a hot mess from the very start.

I think it looks promising. Other than Yoona and HJH, the cast seems pretty good. And at least it will be set in Goryeo, a refreshing thing from Joseon-dominated sageukland.

I hope the drama will not only be about the love triangle. One of the things that made the book so successful is how the friendship between the three always remained. Even when the families tried to knock each other out or the feelings for each other became a whole lot more complicated, they are always loyal to and care for each other until the end.

Aw, the friendship is stronger?

I don't know why but sometimes I feel like drama writers tend to butcher book scenarios for "more profit". I read on a site that the ending of Shine or Go Crazy was totally different to the one on the drama. And I feel like that the ending in the novel was a lot better written and more logical.

This drama looks promising. Can't wait to see YoonA and Siwan's chemistry in this historical series!

I'm more excited about the child actors. Nam Da Reum's so talented, he's going to be one to look out for when he grows up!

Omo! I love Sageuks and the stills look so nice!

You know, for a moment I thought the DOTS cute nurse was Liu Yi Fei (Song Seung Heon's gf) XD

I clicked in because of the title XD This is really the year of sageuks making a comeback huh. Also I think the child actor's name is Chan-young, not Chan-sung! I remember seeing him in Bubblegum and he didn't have that many scenes but he left an impression.

I'm more excited about the child cast, to be honest. nam da reum is divine and is one of my favorite child/teen actors right now along with jung yoon seok.

Nam da reum is such strong actor that I'm scared that the follow-up by the adults will be lackluster, to say the least. But I've liked im si wan in everything so I'm hopefully.

I'm getting excited. I ain't got no time to get excited. I can't watch this drama live.

Yes .. In this drama Yoona become strong women .. Just like her real character ....